The deterioration of global coffee prices steadied slightly in November, yet prices remain at six-year lows, according to the latest statistics from the London-based International Coffee Organization.

All of the ICO indicator prices — Colombian Milds, Other Milds, Brazilian Naturals and Robustas — remained at multi‐year lows in November, while the ICO’s composite indicator price averaged 100.99 US cents per pound, 5.6 percent lower than October and the lowest monthly level since May 2007. In its latest analysis, the ICO says, “Crop year 2012/13 saw a surplus of production over consumption, with good crops in most major producing countries allowing both exporters and importers to replenish stocks and thus putting downward pressure on prices.” 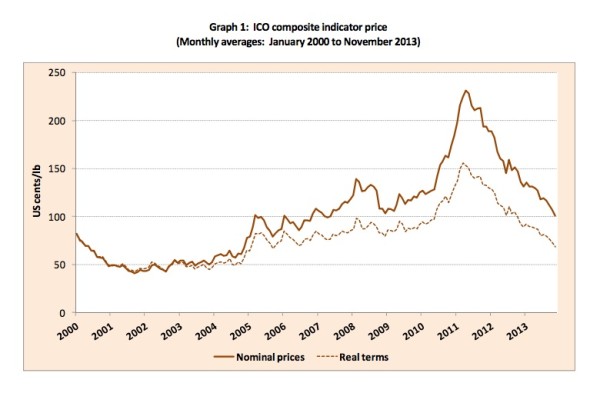 Graph courtesy of the ICO

For the first time in months the ICO suggests that the downward slide of coffee prices may be reaching its bottom, as consumption in the 2013 calendar year increases and as Brazil enters the off year of its biennial cycle. But even that is not good news for some producers, as leaf rust in Central America will result in an estimated loss of 1.2 million bags (or 9.7 percent) of regional production for crop year 2013/14, the ICO says.

As the ICO notes, the painfully low price levels have also provoked responses from governments in the past few weeks, including the Brazilian government’s approval of debt relief measures on Nov. 22, and the Nov. 27 announcement from Colombian President Juan Manuel Santos that farmers would continue to receive assistance through the PIC scheme.