While Readying Flagship, Equator Takes Fresh Approach to the Build-Out Pop Up 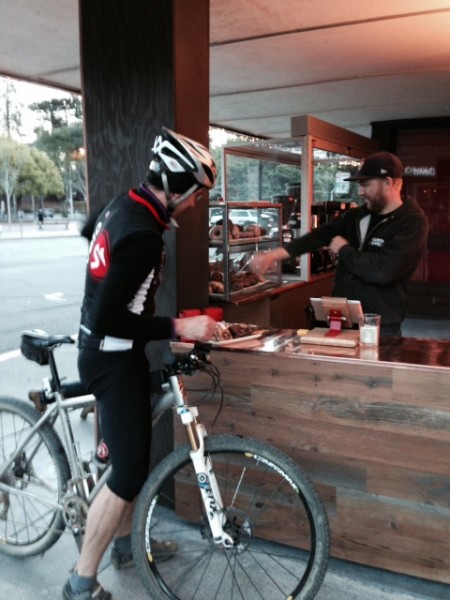 The pop up bar at Equator Coffee in Mill Valley.

We’ve often seen pop up bars in remote locations intended to build local awareness and maintain a revenue stream during the course of a build-out. San Rafael, Calif.-based Equator Coffee and Teas is taking a new approach, running a copper-and-repurposed-wood-clad pop up on the street front just outside its new flagship shop in Mill Valley. It’s a testament to the creativity of the design/build team, which which hopes to have the permanent shop open later this year, in the meantime allowing for continuous operation of the pop up out front.

As previously reported here, Equator owners Helen Russell and Brooke McDonnell have taken over the La Coppa space recently turned over by their specialty coffee colleague Arnold Spinelli at 2 Miller Ave. It will become the second retail bar for San Rafael-based Equator, which opened its first earlier this summer in the Proof Lab surf shop.

The pop up bar will feature Equator’s Tigerwalk blend espresso, Equator blend coffee and food from Johnny Doughnuts, Beth’s Community Kitchen and Flour Craft. Russell says the pop up and permanent location are being designed to present a true sense of place that fits with the existing Mill Valley culture, including being a hub for bicyclists. From Russell:

When we opened up shop in Tam Junction, at the Proof Lab and Surf Shop, we were met with such an exhilarating sense of welcome that we fell more in love with Mill Valley than we ever thought we could. As we keep building out our flagship café, designed by the brilliant team at Boor Bridges, we’ve set up a pop-up shop right out front. To capture the magical spirit of the valley, we spent time cozied up in the local library poring over Mill Valley’s history, invoking the story of the place in our design.