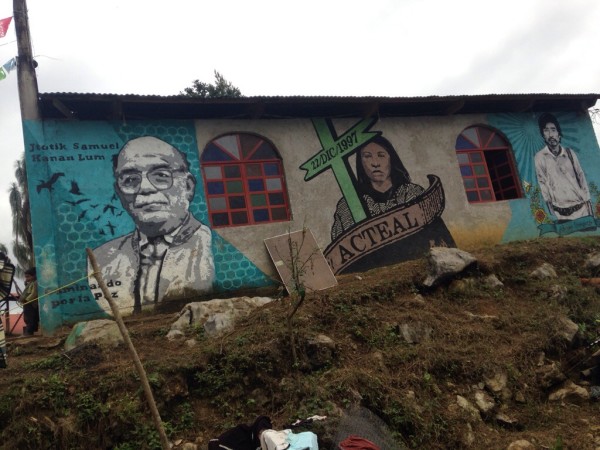 The remnants of the church in Acteal. Photo by Matt Earley.

(Editor’s Note: The following piece was written by Matt Earley of Just Coffee Cooperative in Madison, Wisc., who recently traveled to the Maya Vinic Cooperative in Acteal, Chiapas, Mexico, for a sourcing trip. Earley, Just Coffee and Higher Grounds Trading have been working with Maya Vinic for more than a decade.)

Maya Vinic traces it’s roots to the bloody ground of Acteal. In 1997 many of the MV farmers belonged to another local coffee cooperative. The Zapatista uprising and the government repression that followed had split many of the Mayan farming communities as producers and families were forced to choose sides. The co-op current MV producers belonged to was full of disagreement and conflict.

The families of Maya Vinic’s parent organization — the pacifist Las Abejas — did not choose sides. Or rather they supported the Zapatista aims of striving for indigenous and human rights, but they rejected using arms as an instrument for their struggle. This was and is a great moral statement, but it also made them easy targets for local paramilitary groups that were being armed and trained by the Mexican military to put pressure on indigenous activists. On December 22, 1997 tension in the highlands boiled over as a paramilitary group entered the community of Acteal and massacred 45 women and children in the community church. The survivors of the massacre later attempted to pick up the pieces of their lives and they formed Maya Vinic. They have been some of our best trading partners since 2002 and have been a real success story and a true inspiration.

Visiting Acteal is always an emotional roller-coaster. The mausoleum that houses the martyrs is heavy with a silence that cannot be expressed in words. The photos lining the walls of smiling children who lost their lives that day is heart-breaking. And even though I have seen them annually for years now, the feeling and depth of the sadness there is always fresh and very raw. The farmers of Maya Vinic have attempted to move on and to build new lives out of the ashes of the tragedy. However, this visit was a reminder that things in the Chiapas highlands — the poverty and conflict — are still as real today as they were in 1997.

Marcario Arias was the president of Maya Vinic for three years in the early 2000′s. His family was exiled from their community just before the massacre and he spent years living in refugee communities in the highlands. He returned home in 2001, even though some of the perpetrators of the massacre remained in his community of Puebla, they were never brought to justice. Marcario’s family and other Abejas families have lived in tense coexistence with the former paramilitaries until last year when conflict began anew.

Marcario is a Catholic and is the head of Puebla’s community church. The church was built on a faulty foundation years ago and he and other church members wanted to rebuild it from the ground up. The ex-paramilitaries happen to be Evangelical Christians and saw in the reconstruction a chance to rekindle old disagreements. They attempted to stop the reconstruction and– when it continued– they tore the church down. Marcario went to the local government to complain and to seek redress. When the ex-paras heard about this they began to plot revenge. After he returned a rumor started that Marcario and his friends poisoned the local water supply. Marcario was beaten, run out of town, and told not to return. He spent three days in jail in San Crisotbal while the local police sorted out the charges against him.

The local government tested the water supply and found that there was not and had been no poison. They gave Marcario a copy of the report and told him he was free to return. He caravanned with other community members back to the village with hopes that life could return to normal. The caravan was met on the way by young men with rocks and machetes and Marcario had to run for his life. After he fled, the mob went back to the village and began to threaten the Abejas/Maya Vinic families. They all gathered in a house to pray while the ex-paras burned three of their houses. As they watched out the window the attackers picked up a dog and burned it alive in a fire chanting “This is what we are going to do to Marcario!” They told those praying in the church that they were going to find gasoline to burn them alive. When they were gone the 32 families fled the village in terror.

Today 17 of those families are once again exiled and staying in Acteal. Marcario is in fairly good spirits, but is afraid and would like to go home. When we left him he was working with the local Catholic human rights group– The Fray Bartolome Center– to form a delegation that would protect him when he went back to the village to pick his coffee.

This is another example of why it is so critical to support co-ops like Maya Vinic whose farmers are trying to earn a decent living and live a dignified life. While markets and trade have their limits and “fair trade” has issues, we are building and supporting people on the edge when we buy their coffee. These connections are real. Some of you old JC supporters may even remember meeting Marcario when he came to Madison to give talks in 2005.

If you are interested in helping support Marcario and the other refugees at Acteal, please check back on our website and Facebook for details on how. We will be working with Higher Grounds Trading and others to take donations that will go to buy food, water, clothing, and other supplies for them.

Thanks for broadening our understanding of the on the ground reality in Chiapas and the all to real struggle for survival that is part of the complex landscape of our industry’s attempt to redefine quality to include not only quality in the cup but quality of life.

Thank you Matt for this story, commentary and reminder about the importance of our purchasing powers and our ability to create change.