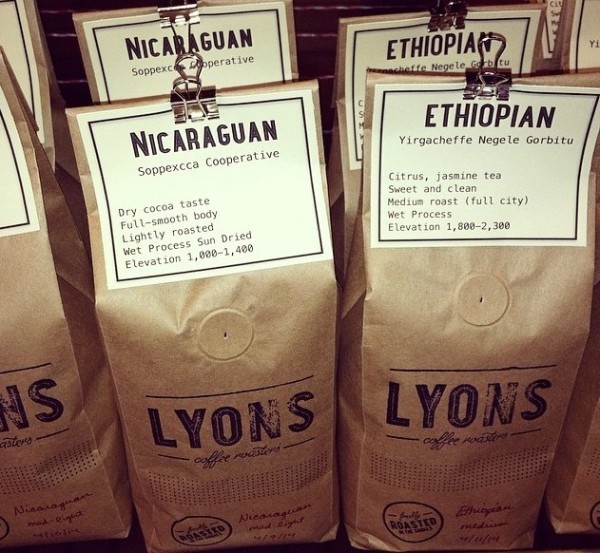 Coffee from Lyons Coffee Roasters. Facebook photo. As of this writing, Lyons only had five more bags in stock.

An Alabama couple that earlier this year opened the first specialty roastery in the Muscle Shoals, Ala., area since the 1940s is getting out of the game following homophobic tweets from the brother one of its potential business partners.

Kenny and Scarlett Lyons, who moved to Kenny’s hometown Florence after years in Los Angeles, say the decision to close Lyons Coffee Roasters is because the business was primarily a venture in fun. In a Facebook statement last week, the couple said:

When we started our little coffee roasting business in Florence, we said we just wanted to have fun with it. We knew it would take time and hard work, but also knew that it would be worth the effort. However, from the beginning we said that we would close the roastery if the enjoyment were gone.

That enjoyment was lost last week after Garrett Shirley, the brother of Muscle Shoals-based Shirley Ice Cream, a company that Lyons had immediate plans to do business with, made a series of homophobic tweets that began making the rounds in various social media channels. One tweet called the Boy Scouts of America “sissified effeminates” for considering a revision to a “no gays” policy, while another responded to a Colorado cake baker’s refusal to work with a gay couple. It read: “So homosexuals are raging over Cake Baker & Barber denials? How asinine as a culture can we get. That’s hilarious, not debatable!”

Shirley’s account was soon set to private, but that didn’t prevent an immediate backlash against the ice cream company, including Lyons backing out of the business deal. Local farm store Jack-O-Lantern Farms decided to no longer carry Shirley products. In response, local pastor Jeff Noblit of Grace Life Church of the Shoals called Jack-O-Lantern “gay activists:”

Support a brother who’s business is being targeted by gay activist. SHIREY ICE CREAM. Ask Jack-O-Lantern Farms to bring their products back!

In a Facebook post, the Shirley Ice Cream owners voiced support for Garret Shirley’s comments, which they say were merely expressions of “biblical-based convictions:”

Most of you know, Jack-O-Lantern Farms has removed Shirey Ice Cream from their store. Their stated reason was that they feared losing business by being associated with Shirey Ice Cream. Primarily they took issue with some of Garrett’s tweets where he explained his biblical-based convictions that show homosexuality to be sin.

One could argue unendingly about the verbiage Garrett used but that’s really a sideline issue.

Compelled to respond, Jack-O-Lantern owner Connie Carpenter made the following statement on the farm’s Facebook page:

When we decided to quit carrying Shirey Ice Cream it was not because of their beliefs. We think everyone is entitled to think what they want to. It was because of the mean way he said it. I don’t think you should intentionally hurt or demean anyone on purpose. We had to make a decision one way or the other and we made the decision that was right for us (and in our hearts). We understand that not everyone agrees with us and that is fine. Everyone has a right to their opinion as long as they don’t hurt anyone by being mean spirited about it. I am not highly educated as a lot of you are, but I hope I am saying all of this in a way that you can understand our feelings.

For their parting, Kenny and Scarlett Lyons said the following:

There were no winners this week in the online battle of words. Many innocent people were hurt. Justice wasn’t served. No soul was won for Christ. Love did not make progress.

The enjoyment we were looking forward to as the first local coffee roastery in the Shoals since the 1940s is gone, and since we’re left with a hostile environment to work within, we are closing the roastery. We want to be peacemakers, and we resist being drawn into bitter division between friends, businesses, and faith communities.

We loved roasting coffee for the Shoals, and we loved getting to know many people that we might not have otherwise. We’re looking forward to more family & friend time and enjoying all of the good that the Shoals has to offer.

How is this related to the Lyon’s brand? Based on this article it just seems that one of the wholesale accounts offended people. We definitely have customers that do offensive things when they are not in our shop. Not really sure how these dots connect.

yeah i’m a little confused as to what really happened.

They said that they would no longer want to work in the area if the joy was taken away of the conditions in the community became hostile. That’s what happened. I’m sure if the offender had apologized and changed their tune, that the roaster would have stayed. Instead, because the hostility continued, they lost their joyful energy.

I’ve heard it said that the only bad publicity is no publicity (TIC). If this is what it takes to shut down your business, I guess your not made for business. I tell my employees often that, “It takes all kinds, and they’re all out there”.