A New York-based photographer and former New Zealander and flat-white-drinker, Henry Hargreaves has compiled a serious collection of used to-go cups from some of the best coffee purveyors throughout the world, with a heavy emphasis on Brooklyn, Los Angeles, Portland, London, Sydney and Melbourne. 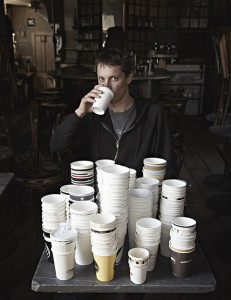 Henry Hargreaves, curator of Coffee Cups of the World

Why? “I think it’s something that should be a focus of the cafe, but so often is an afterthought,” Hargreaves tells Daily Coffee News. “To me, it’s a crucial part of the experience, like the cover of the book.”

Hargreaves began collecting the cups about a year ago after ordering a coffee from The Smile in New York, He loved the cup’s stamp. “I felt like I had for my money’s worth and didn’t want to discard it so easily,” says Hargreaves, “so I kept it and began my collection.”

Mostly on his own with some contributions from friends over the past year, Hargreaves has amassed some 200 cups, shooting them each in the same location with a Canon 5D Mark III. During his many travels, Hargreaves did notice one remarkable trend, describing the custom cup with stamped artwork as “very much an Anglo thing.”

(related: The History of the Coffee Sleeve, Practically a Work of Art)

Says Hargreaves, “Nice to go cups were rare in places like France, Italy and Germany, and when I did find them they were mostly owned by Brits or Aussies.”

Be sure to browse the Coffee Cups of the World Tumblr for more. You will get lost in there.