Not to Sound Alarmist, But Instant Coffee Is Taking Over the World 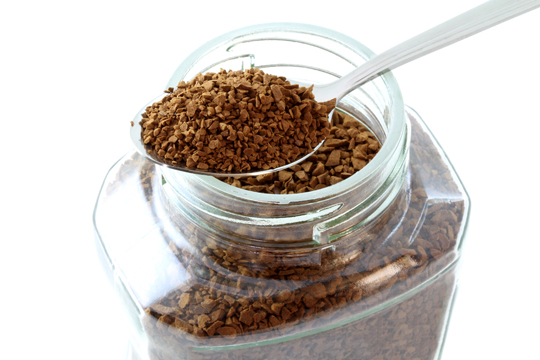 If you exist largely in specialty coffee circles, this may come as a bit of a shock: Half of the world prefers instant coffee over “fresh” coffee, and instant’s global market share is on the rise.

Moreover, the makers of soluble coffee products have been increasingly borrowing language and marketing tactics from the specialty coffee world to achieve these gains.

These are some of the findings from a recent Euromonitor International study confirming the market share growth of instant coffee products in much of the Eastern hemisphere, especially in countries like China, Turkey and India. It is not a coincidence that many of the countries and regions in which instant’s popularity has risen also still prefer tea.

Less surprising than the volume growth of instant coffee in the global market may be the market share increases — after all, countries like China and India are also helping lead the way in volume growth of specialty coffee. Instant coffee sales have tripled since 2000 to $31 billion in retail sales last year, and that number is expected to increase to $35 billion by 2018.

Check out this map, which divides the world in two by preference: instant coffee or fresh coffee. (Just to be totally clear on our definitions, instant coffee refers to traditional additive-filled, soluble, largely-not-actual-coffee products, while “fresh” here refers to pods and other ground coffee. Additionally, for the purposes of this map, “retail brewed volume” actually refers to retail sales by volume of home brewed products.) 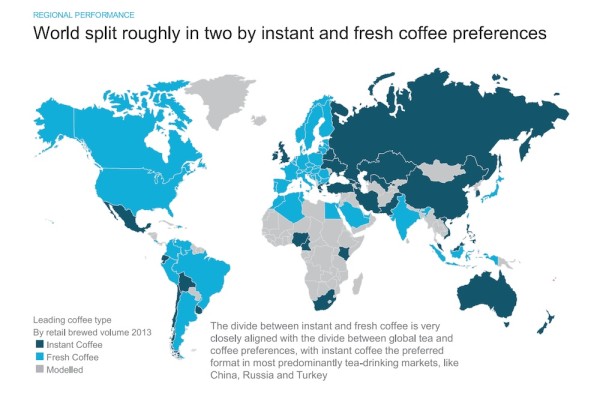 Among the other interesting takeaways from the report was the complete world domination of the Nescafé brand in the instant market:

Britons Are Still Buying Loads and Loads of Instant Coffee

Home consumption of instant coffee “continues to record strong growth in the UK,” according to the Euromonitor report. In fact, British consumers account for nearly a third of the instant coffee sold in all of Western Europe:

Like other predominantly tea-drinking markets, instant coffee has long dominated the British coffee market. Even as UK consumers develop a taste for fresh coffee, thanks in part to a robust on-trade culture, instant coffee has managed to remain relevant.

Some of the continued strength of instant in the UK market is attributed to new products that borrow some terminology  — and even some traces of coffee — from the specialty world.

(related: A Look at Some of the Best Coffee Packaging Designs of 2014)

For example, there is Nescafé Azera, pitched as a “barista-style” drink. Says Nescafé, “We all love barista style coffee. The intense aroma. The enticing look. The roasted coffee taste. Now you can enjoy all of that pleasure in the ease of an instant.” There is also Kenco Milicano, which is a mixture of actual coffee and soluble powder that the company oddly describes as the world’s first “wholebean instant.”

Euromonitor International suggests these kinds of “hybrid drinks” are expected to lead the instant category’s market growth in the UK and beyond.

Sorry but instant coffee in Poland definitely is much more popular (unfortunately) than fresh coffee. please chack your statistics.

You are correct that the instant coffee is capturing the world every moment. The diagram illustrates that India likes fresh coffee but in actual India is wholly dependent on Nescafe and Bru which are instant coffees.

Yes, instant coffee seems the majority preference as easy to make a cup and of course the preferences on the instant coffee type and quality depends on the money each majority in each country can afford to pay, so some countries in Europe and in Asia have niche for Freeze Dried Coffee good quality but some FD coffee are also no good taste as made using Robusta Coffee, so it depends on the coffee they used to drink, most instant coffee is spray dried (fine particles) or agglomerate form (granules form) but even they are processed at high temperature than freeze dried coffee (bellow zero)it does not means they are no good quality as some coffee are made from pure coffee and this can be from Arabica or Robusta or blends, but depends on raw material and process conditions, some maybe made with some barley or mixed with chicory as some countries like these blends. Even a market for low quality instant coffee exists anywhere. Despite Nestle dominates the market in most countries this does not mean that they do good coffee, as they adequate price and taste according each country and money customers can afford. There is also better coffee instant in most producers, but no one can have a real good taste of specialty coffee R&G and new development on this area is made in Brazil and perhaps in others countries. South of Minas Gerais in Brazil is the one of the best specialty coffee and this is growing fast. I know others countries like Ecuador,Nicaragua, and others they have specialty coffee too.
But instant coffee is also used widely worldwide to make for example the famous 3×1 and this product in China and Asia is majority as easy to prepare and people can afford to buy. About this several technicians can talk hours and hours.

I wouldn’t buy a Nestles product if it was the last coffee on earth.

I think you’ve got confused… not all instant Coffee producers are producing ‘additive-filled, soluble, largely-not-actual-coffee products’.

If you check the ingredients on these you’ll find that they are (using Nescafé Example) made from 100% coffee beans and nothing else.

Yes it is a fact that instant coffee is dominating the market in many countries but that’s not necessarily a bad thing. Tastewise sure it’s not as good as freshly brewed but good or decent instant coffee, especially not from giants like Nestlé, is basically just a stripped down version of coffee, without the special aroma fresh coffee has. That’s not bad. You just don’t get that flavour that makes it special, it’s just generic, but good. Not all instant coffees are “not real coffee products with additives”, no, plain spray dried or freeze dried coffee is pretty much just coffee. So I fail to see the problem. Taking into account the fast pace of life in today’s world, it’s plain to see that instant coffee makes sense because it’s quick and easy to make. If people had more time in their hands, then the time and effort to make freshly brewed coffee wouldn’t be such an issue. Enjoy what you want to enjoy. If people drink coffee for the caffeine, then they don’t like coffee and never will. If they do like coffee as a beverage then instant coffee is a start.