Announcing the 2015 Micro Roaster of the Year: Portola Coffee Lab 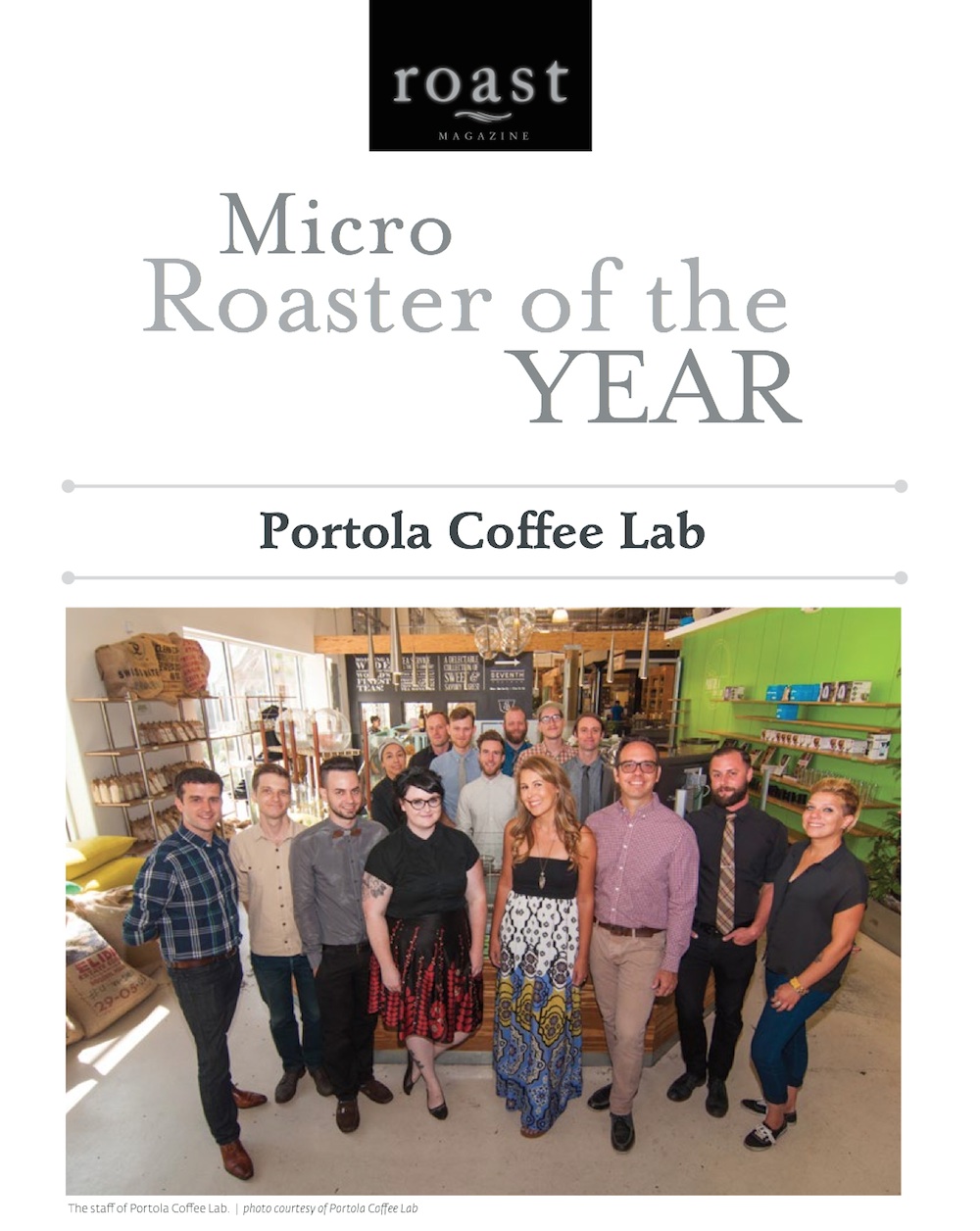 Retail locations: One; three more in the works

Maybe this is his way of paying it back.

All the years of putting off his homework until after midnight. The math and chemistry assignments he’d knock out of the park but wouldn’t start until the last possible moment.

“I was an unparalleled procrastinator through high school and college,” says Jeff Duggan, co-owner of Portola Coffee Lab in Costa Mesa, California. Smart but sluggish—at least without a caffeine drip.

Ask him and he’ll tell you coffee got him through every late-night cram session and early morning class. Not good coffee, mind you. Functional coffee. And lots of it. It may be hyperbole to say coffee is the reason he made something of himself, but not by much.

Flash forward to the present day. Jeff now spends his days thinking about coffee nonstop. How to use science and technology to improve both the quality and consistency of his roasts. How his coffee bar can push the envelope to show what coffee can be, not just as a beverage but as an ingredient.

“On paper, these were identical roasts,” he explains. “The cupping table told a very different story.”

Then he’ll launch into the intrinsic value of sensory roasting—the sights, sounds and smells a roaster needs to understand as much as repeatable, measurable variables. And he’s likely one of the few roasters who can speak to the potential of cloud-based learning systems to improve the skills and knowledge of baristas and wholesale customers.

“It creates a learning environment that’s ultra flexible,” he says, “while integrating multimedia tools such as text, graphics and images, and audio and video designed to increase the training efficacy.”

With his every action, Jeff is intent on nudging coffee to a better place—better quality, better experience, better environmental and social practices, better everything.

Is it any surprise Portola Coffee Lab—the coffee bar and roasting operation Jeff owns with his wife, Christa—was named Roast’s 2015 Micro Roaster of the Year?

Not to anyone who’s ever heard Jeff speak about coffee.

It’s About the Experience

The coffee bar at Portola Coffee Lab looks different than most. It’s more of an island than a bar, with low countertops that allow customers to walk around the counter and interact with baristas. The shape is deliberate. Portola Coffee Lab is in Orange County, a market traditionally dominated by chains.

“We were born in a county where ‘third-wave’ coffee didn’t exist,” Jeff says. Still, he and Christa knew they wanted a true coffee menu. Portola Coffee Lab eschews syrups and other additives, focusing as much as possible on the natural flavor of the coffee. Aside from the coffee varieties, the most exotic ingredients in the main shop are milk and the Belgian chocolate used for mocha.

The brewing methods are decidedly un-chain-like as well. Customers can choose between the Hario V60; the Hario Siphon, heated by halogen lights; or the Bunn Trifecta.

“I’m a firm believer that the same bean can taste like three different coffees based on how you brew it,” Jeff says.

The question is, how do you sell that to a demographic that walks into your shop for the first time and thinks, “What planet did I just land on?”

You create a customer experience that’s more inviting than pretentious. You build a coffee bar where it’s easy to see what baristas are doing and ask them why they’re doing it. Questions are currency at Portola Coffee Lab—the more, the better.

“It’s not just about selling a $4 cup of coffee,” Jeff says. “It’s about being open and accommodating, and being willing to answer the same questions hundreds of times a day, if necessary. The last thing we want to do is impose a sense of superiority on our customers by acting exclusive, but we also had to teach the people of Orange County that there are very distinct reasons our coffee tastes different.”

Then, after you succeed in educating your customers, you push their palates even further. At the edge of Portola Coffee Lab sits a “concept” coffee bar called Theorem—a six-seat bar that asks the question, “Is coffee a beverage or an ingredient?”

The answer is an emphatic, “Yes!”

Theorem began by offering two types of coffee service. The first was a reservation-only service that led customers through a fixed-price menu of unique coffees, recipes and creations designed by head barista Truman Severson. (This service was recently discontinued so the company can focus on consumer coffee and espresso training courses, which are in high demand.)

The second, now the primary service offered, is a walk-up brew bar with a rotating menu of boundary-expanding coffee drinks created by select Portola Coffee Lab baristas. No brew method is out of bounds, no experiment too far-fetched. And unlike Portola Coffee Lab’s main bar, non-coffee ingredients are encouraged.

Shortly before Theorem opened, writers from Sprudge.com took part in an advance seating, deeming it “one of the most ambitious, professional, and exciting coffee experiences we’ve ever had.” They described a menu that included five interpretations of the same Ethiopia Worka coffee—from a piccolo macchiato made with 6 percent milk from Straus Family Creamery to an “enhanced espresso, wherein a mixture of filtered water, blueberries, clove, and vanilla were heated and allowed to macerate together in a Hario TCA-5 siphon pot.”

“It’s truly a playground,” Jeff says. “It’s our space for pushing the envelope and experimentation. What’s great about Theorem is we don’t know what’s going to come out of that space next week or next month. It’s a totally blank canvas.”