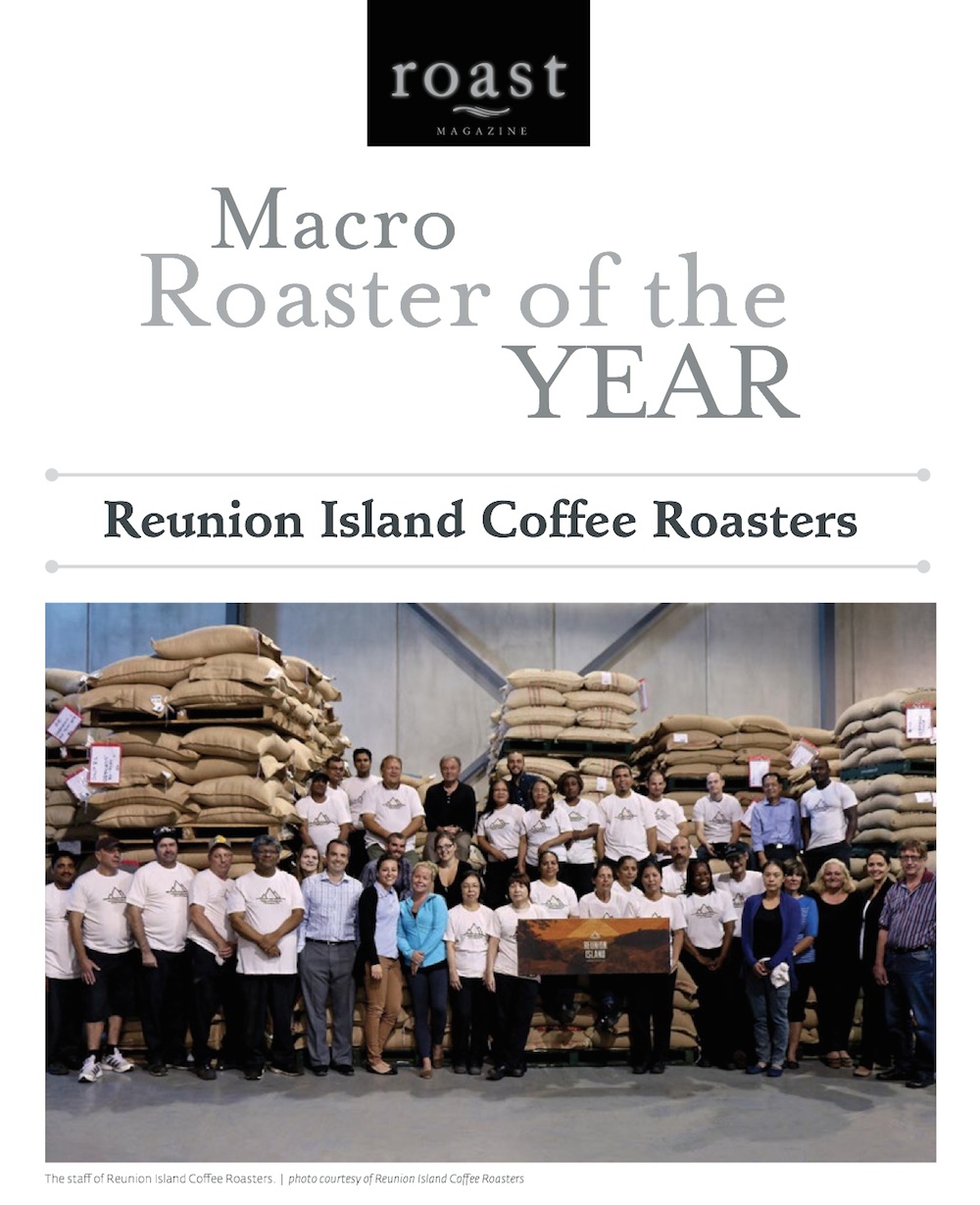 “But that’s how we’ve always done it.”

To Adam Pesce, those are fighting words. The director of coffee at Reunion Island Coffee Roasters in Ontario, Canada, doesn’t believe in sacred cows when it comes to running the business.

“My mantra right now is to kill our darlings,” Adam says. “We aim to be a progressive and forward-thinking company, from how we source to our sustainability programs to the way we set up production. Everything’s on the table, because that’s how you grow and evolve.”

Fast approaching its 20th anniversary, Roast’s 2015 Macro Roaster of the Year has grown and evolved plenty since Adam’s father, specialty coffee veteran Peter Pesce, opened the business in 1995. Once a modest roastery housed in a 3,000-square-foot facility in Mississauga, Ontario, Reunion Island is on track to roast 4 million pounds of coffee this year from its current Oakville location. The company began taking sustainability seriously in 2002 with the purchase of its first fair trade and organic coffees; now Reunion Island is a certified B Corporation, signifying the company’s commitment to meeting rigorous standards for social and environmental performance, accountability and transparency.

More recently, the company’s coffee program has undergone its own revolution. Upon purchasing a Loring Smart Roaster in 2013, Reunion Island killed its old darling of a roast style. The company is offering more light roasts than ever, “allowing our coffees to speak for themselves and really shine,” says Adam. Among the coffees benefiting from this are selections from Reunion Island’s new Small Lot Series, a curated monthly collection of micro-lot coffees tailor-made for the Loring. The limited-edition coffees are a departure from Reunion Island’s past lineup of blends and single origins. In Adam’s mind, Reunion Island is entering an exciting new era.

“Things have really changed course over the last couple of years,” he says. “Not so much in the style of company we want to be, but in the way we want to achieve it. We had a very short stint where growth was primary, and it was hard because we were trying to maintain quality rather than improve it. Now we realize that if we do everything we can to improve, the business comes with it. There’s no better sales tool than word of mouth from a really satisfied customer.”

Owner Peter Pesce established himself as a coffee pioneer with the opening of Bourbon Coffee in 1978. One of Canada’s first true specialty roasters, Bourbon was part of coffee’s “second wave” that swept through North America in the late 1970s and early 1980s. Peter was near the front of the wave, earning renown as an expert cupper. He eventually served two terms as chairman of the Coffee Association of Canada.

Bourbon proved so successful under Peter’s ownership that he couldn’t help but say yes when Kraft Foods approached with an offer to buy the company in the late 1980s. He worked at Kraft for a time, but missed independence. He opened Reunion Island Coffee Roasters shortly after his non-compete agreement ran out.

Peter Pesce still owns the business, but has taken a less active role in recent years—largely because of his confidence in the company’s current direction. Folks like Adam, Director of Operations Greg Rusciolelli, Quality Manager Seth Taylor, and nearly 50 other coffee aficionados have become a well-functioning team that’s not willing to sit still.

Adam has played a big role in the company’s evolution. He was a jack-of-all-trades at first, starting in the quality control lab nine years ago before moving to sales, supplies, and eventually buying and sourcing. Sustainability quickly became his passion.

“Pretty much everything we buy is either direct trade, Rainforest Alliance, or fair trade,” Adam says. “We’ve never committed to one model, because we don’t believe there’s one fix-all that works for every farm. Organic may not work at the top of a 6,000-foot farm at a 60-degree angle, but maybe Rainforest Alliance does. Sometimes the biggest issue is a labor issue, so fair trade makes the most sense.”

The company’s commitment to sustainability culminated in its B Corp certification in 2013. B Corporations must pursue sustainability throughout their supply chains, voluntarily committing to meet high standards for transparency, accountability and performance. It turned out to be a natural fit for Reunion Island.

“As we went through the assessment process, it became apparent that the tremendous amount of work we have done—both abroad and at home—had made more of an impact than we realized,” Adam says. “We’re 100 percent focused on quality, but sustainability has also been a real difference maker for us.”