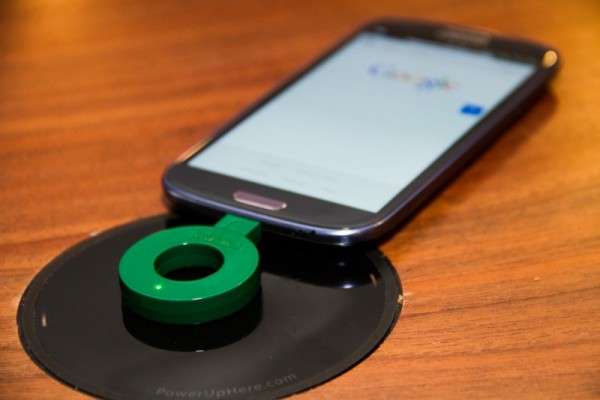 In what could prove to be a bellwether event for coffee retail amenities delivery, Starbucks has unveiled the wireless smartphone-charging system Powermat at some 200 Bay Area locations.

The company has been beta testing the Powermat system at numerous locations throughout the country over the past year, and Starbucks expects to follow the Bay Area rollout by introducing the technology throughout its U.S. locations, as well as to some international markets. Backed by Proctor & Gamble’s Duracell, Powermat is one of numerous proprietary wireless charging systems that have competing for lead market position, something that could be greatly aided by the Starbucks partnership.

For the in-store application, consumers wishing to charge their smartphones can choose to borrow or buy a Powermat-compatible ring — available for $9.99 — and they must leave their device sitting atop the designated “Powermat spots” that are built into Starbucks’ tables and countertops.

“This first market installation is a first step towards a national deployment of this amenity in our stores,” Adam Brotman, chief digital officer at Starbucks, said in a company announcement yesterday. “We were pleased with the customer response to the pilot tests we conducted over the past two years and we now expect an even greater level of customer satisfaction as we set forth to offer wireless charging capability on a national scale.”

It seems part of Starbucks’ interest in the technology is to draw consumers into stores, rather than merely offering convenience to existing customers. Of consumers, Powermat Technologies CEO Ran Poliakine said, “They know that the nearest charge is only as far away as the nearest Starbucks.”

There is no denying that Starbucks has been a pioneering force in coffee retail, taking what is arguably a “give everybody everything” approach to customer convenience and amenities. Of course, retail decisions regarding power supply access, wi-fi access and the like are often cultural ones — see this pop-up cafe housed inside a signal-blocking cage — but it will be interesting to see if and how this technology plays out among independent retailers in the coming years.