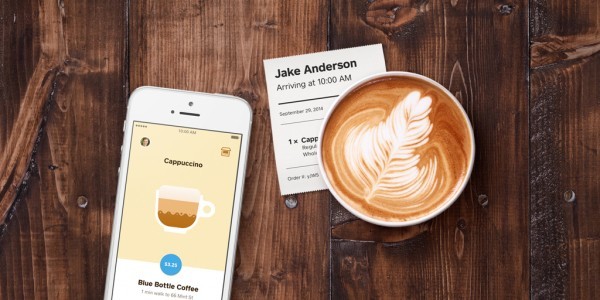 Partnering with Blue Bottle Coffee and a small handful of other shops in New York and San Francisco, Square has officially rolled out its new Order app, which uses location tracking to allow customers to place advance orders and notifies staff of impending arrivals. The company announced the app development in May — while simultaneously ditching its Square Wallet app — but it didn’t make the rollout public until yesterday, following pilot programs with some retail partners.

The company, whose Square Register program is a popular POS solutions in shops throughout the world, is calling the app’s highlight feature “arrival prediction,” based on location tracking. Coffee shop staff are notified when the customer is close to the store, with the idea that they can prepare the order to be ready for quick pick-up. Yesterday, Square explained the app to consumers:

You accidentally slept in and are running late for your 9 a.m. You really don’t want to forgo your morning coffee ritual, but standing in line at your favorite shop isn’t an option. Good thing you don’t have to. Square Order lets you place an order in just a few taps from anywhere (like, as you’re rushing to your car), and pick it up whenever you’re ready. How does this magic work? With first-of-its-kind arrival prediction technology, Square Order can tell when you’re close and alert the coffee shop to set your order in motion. When you arrive, it’ll be fresh, hot, and ready on the counter. No need to pay or tap — that’s already been taken care of in the app. Just pick it up and be on your way.

Despite Square’s relationship to Starbucks, cemented by a $25 million investment from the latter two years ago, Starbucks is not using the Order app, and is instead developing its own comparable pay-ahead-then-pickup app for a forthcoming nationwide rollout, according to Starbucks sources in a Re/Code report earlier this summer. Blue Bottle announced early last year that it was rolling out the Square POS and the now defunct Wallet — which allowed customers to order inside shops with their smartphones — at all of its retail locations.

A great way to cut in front of all the people who are patiently waiting in line and managed to get their acts together early enough.

This could be a disasterous curveball for behind the bar efficiency and also managing matching customers to drinks once they’re on the customer handoff bar
-curious to see how this changes workflow/cafe flow!