Rendering of the renovated and expanded Carabello Coffee headquarters. The shop and roastery currently occupy the right section of this rendering.

Cincinnati-area roastery and retailer Carabello Coffee has secured more than $40,000 through Kickstarter, with plans to buy and renovate its existing headquarters building for expansion.

Longtime roasters who opened the company’s flagship roastery/shop in Newport, Ky., in 2013, Justin and Emily Carabello say business has grown 80 percent in the past year alone, and they plan to occupy more space through an adaptive reuse of their historic building.

The couple maintains a deeply philanthropic mission for the company, contributing to specific causes locally, as well as to organizations in coffee-producing countries.

Considering the fundraising success, we caught up with Justin Carabello to talk about the expansion plans, how craft coffee has been advancing in the greater Cincy area, and how Carabello fits in:

Who are you working with for the design?

We are working with WORK Architecture + Design. They specialize in historic adaptive reuse projects and are a small firm just getting going. The main guy we are working with is Tyler Watkins. He lives three blocks from us and in the same historic neighborhood as the shop. So it is cool that he has a real tight connection in the neighborhood. 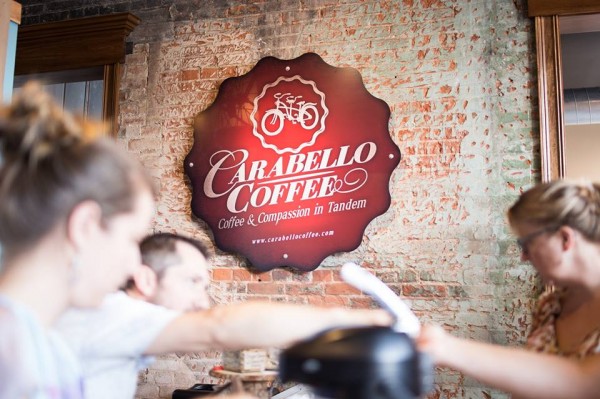 The Carabello logo in the existing bar.

The renderings of the exterior look great, but what are you hoping to achieve aesthetically inside the new space?

This is a pretty wonky historic building that kind of evolved as the city grew and changed. In our existing cafe, we have been able to take advantage of a lot of exposed brick. We paired that with cedar and some thick poplar and it has been really nice. We will carry as much of that through into the new space as we can, adding a good bit of bourbon-stained wood from a KY distillery. It was a check-cashing business previously, so there is a lot of demo work that needs to be done. It has a real bank-type feel that we want to undo. We are going to keep things really opened up as far as the floor plan is concerned. We will open up the large window areas that are stuccoed over right now and also put in some transom windows. That will let in a lot of natural light.

Our feel has been kind of historic, urban-industrial in some ways. Warm, but also not polished.

Will there be any renovations to the existing space aside from moving out the roaster?

Yes! We will add a larger kitchen, some office and dry goods storage space. We will have to completely gut it and change the floor plan. We will also have to blow an opening in the brick wall that separates the two spaces. Weird, but it is actually two old buildings that were joined together on the deed at one point — so we need to connect them internally.

How much of the expansion will be public-facing?

One of the things we’re excited about is adding a slow bar in the new space. Right now we are in an area of the country where we have been able to bring a lot of people into the specialty coffee fold by doing some small things like only brewing by the single cup in Clever coffee drippers after 11 a.m. or only offering the classic-sized espresso-based drinks, and doing other things like Chemex brewing, roasting on site, et cetera. 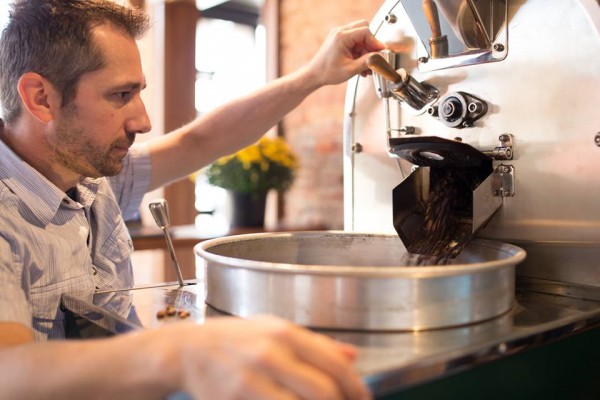 But we have also done it in anyway that starts a conversation with people. It’s pretty typical for someone to come in and order a caramel macchiato, meaning, really, they want a caramel latte. So, that gives us a chance to talk to them about the difference between a macchiato in a demitasse versus the latte. For a lot of people, discovering little things like that, and then tasting drinks that are superior to what they’re used to, has won us a lot of customers. We hold ourselves to high standards, but we’re accessible to people.

How does the slow bar advance this approach?

We can allow people to hang at a bar that is all about brewing manually, with an emphasis on process and discussion. So, we will have a shop within a shop. For those folks who want to meet their friends over a mocha or have a business meeting, we will have the existing cafe — albeit with expanded seating because the roasting operation will be moved — but for those coffee geeks, area baristas and people who want to learn more, they can visit the slow bar. There we will have coffees that we don’t have on the main bar, brew methods that don’t work in faster paced environments, signature drinks or drink builds that take more time. Plus, it will also be a great way for me to open it up for my staff to grow and experiment more in their craft.

We will also create some new designated workstation type seating for folks who want to camp and work for hours on end.

Are there plans to visually highlight the roasting operation and training lab, or will those areas be blocked off?

Yes, the roasting will actually move to the prime location in the building. It will be clearly visible from the sidewalk and road. It will be quasi-public, meaning, it will be visible and accessible when we want to invite people in, but it will also be able to be roped off while we work. We want to continue to connect people with the roasting, so we did not want to leave and go do it somewhere else.

In this area we will also be able to do wholesale customer training and run classes, do staff cuppings and training as well as barista jams or throwdowns — something we are not presently able to do because of the layout of our other space.

Best coffee I’ve ever had, and everyone who works there is awesome. I drive across the river to buy their coffee beans. Can’t wait for the slow bar.