What Is Craft Coffee? 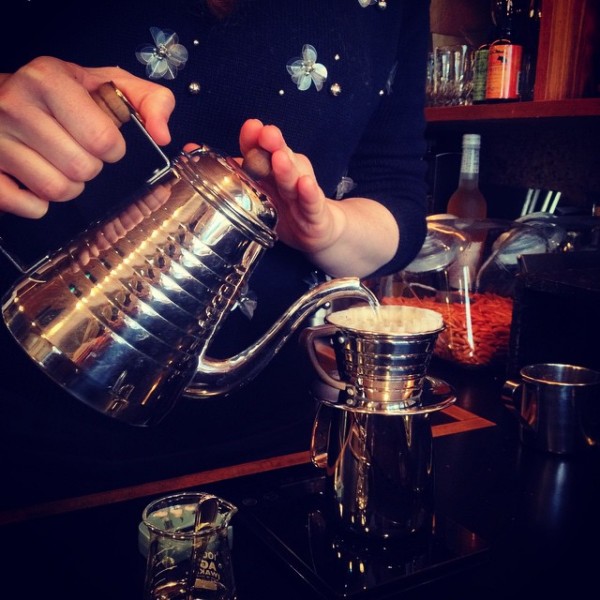 2014 Creative Commons photo by AJ Leon of a Kalita brew at Fuglen Tokyo.

Terminology integrity issues abound in the coffee world. Consider generic, hollow quality differentiators like “premium” or “gourmet.” Or the fuzziness associated with “direct trade.” Or the very phrase “specialty coffee,” which, despite having some grounding through accepted standards for green coffee as developed by the Specialty Coffee Association of America, becomes much more ambiguous when roasting and brewing get involved. Or, finally, the contemporary star of compromised coffee descriptors, the murky and oft-suspiciously-marketed “third wave.”

The one I’d like to focus on today is “craft coffee.”

First, a caveat: Craft coffee is not a real thing — no more so than craft doughnuts, craft beer or craft cocktails. Coffee, doughnuts, beer and cocktails have been made by hand with various degrees of care and ingenuity for decades, or centuries, and only in the past 10 years have we been bastardizing the noun craft and affixing it to them as an adjective. But all these things do have one critical production-related element in common, an element I believe gives the phrase “craft coffee” some legitimacy.

That element is, of course, attention to manual skill. The major dictionary publishers are in alignment on this: Craft is an art, trade or occupation requiring special skills, especially manual skills.

In coffee, opportunities for craftsmanship — the application of professional skill and manual precision — are apparent at almost all stages of production from farm to cup. But does a coffee have to have proven craftsmanship at all those levels to be labeled “craft?” If nowhere else, the term certainly can apply to the brewing stage, where opportunities range from inserting a pod and pressing a single button to manual control over every parameter and function.

What sparked my obsessing over this phrase recently was a press release from home appliance manufacturing giant KitchenAid. The company now has an official Craft Coffee Team of product developers, and it recently introduced three new products to its Craft Coffee line, including a siphon brewer, a French press and a manual grinder. They are soon to join the already available KitchenAid Pour Over Coffee Brewer, an automatic filter brewer that strives to replicate manual pourover action and results.

KitchenAid’s attempts to capitalize on the unprecedented and growing popularity of “craft coffee” among home brewers is understandable. In the release, KitchenAid Product Design Manager John McConnell says:

The brand’s craft coffee design team focused their efforts and multiple innovations around one simple mission: to make it easy for people to drink a better cup of coffee in the comfort of their homes.

That all sounds well and good.

Good coffee is becoming more prevalent today, much like craft beer. And what you’re seeing is that once people are exposed to craft coffee, there’s no turning back.

Ok, we’re still with you. But then there’s this from McConnell:

We’re taking the manual aspects out of craft coffee, which just makes it easier and more accessible for everybody.

That’s where the record scratches. Taking the manual aspects out a craft is to undo it. It is the very manual-ness that defines a craft.

It’s entirely possible that KitchenAid’s new products do have the ability to produce stellar results, even when touched by untrained, nonprofessional hands. (Their stand mixer is a proven winner in its high-end home category.) But should we not try to protect one of the only remaining reasonably definable terms in the coffee industry?

Calling it “craft coffee” is as foolish as calling the craft beer market “Blue ribbon beer”.

As soon as some one starts a trend, there are people who will use it to sell. That selling is what kills the terms we use. Then we have to find new words to differentiate ourselves. For my future shop, I decided to start my own term. Who know, maybe someone will want to sell it.

The promise of quality is destroyed when a coffee’s flavor does not meet the expectations created by marketing.

Interesting. I have been using the term “craft roasted coffee” since 1994 when I started roasting. It is so adorable that the new kids think they invented it all in the last few years. But honestly, pourover etc was old in 1970 when I first took coffee seriously. But then the internet wasn’t there to make everyone who can open google an instant expert.
Carry on

Man, I don’t know who you are, but you just became my new best friend! A seriously terse and apropo observation.

Fantastic response. Mirrors my experience and observations. Thanks for posting! The other irony is that most of today’s third-wave “craft” roasters really don’t know what they are doing and their coffee is evidence of that fact!

Craft beer actually does have a legal definition put forth by the Brewers Association. It has everything to do with volume produced and ownership, very little about the product itself. It’s split into 3 categories: Small, Independent, and Traditional

Is it important to officially define coffee in this way or in another (reasonably) agreed-upon way? I think in order to differentiate great coffee from the status quo, we need to call it something.

We can just call great coffee. Um. Great coffee. And maybe that could be the next term. As a small roaster 75,000 lbs per year. I don’t call my self anything but a small roAster. “Hand roasting” which I even hate because I’m obviously using my hands. Because I have hands and I use them. The need to always call something something is an artificial construct so that we can name it and know it. Like when we leaned to point at a cat or a dog or mom or dada. I’d rather not call it anything but coffee. And if it’s great it won’t need a name