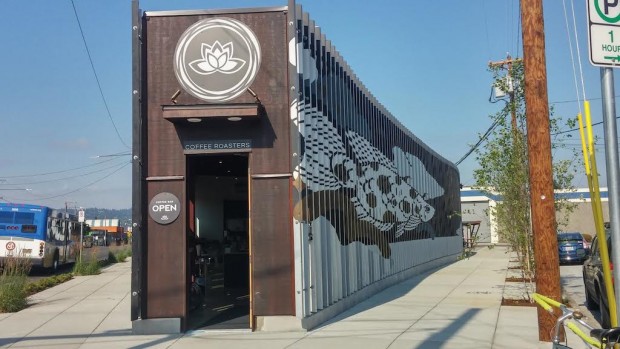 Portland micro-roaster and retailer Seven Virtues Coffee Roasters quietly opened the doors to its second location in June as part of a nascent cluster of micro-restaurants housed within The Zipper, a new construction project by the literally groundbreaking Portland firm Guerrilla Development.

The wedge-shaped single-story facility occupies a triangular block bordered by Sandy Boulevard, NE 27th Street, and NE Pacific Street in the Kerns neighborhood of close-in Northeast Portland. Seven Virtues is the first of seven businesses to open in The Zipper, which will eventually also boast four restaurants, a full bar, and a “punk rock” nail salon. 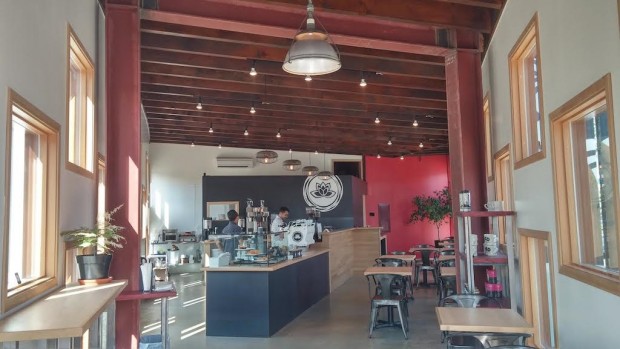 Inside Seven Virtues in The Zipper. Photo by Howard Bryman for Daily Coffee News

“I think it’s great because in the long run, we’re not opening up all by ourselves,” Seven Virtues owner Mike Blair told Daily Coffee News. “Usually when you have a shop and you open up, it’s just you, and you’re waiting for people to come and you’re waiting for people to realize you’re open — which is what we’re going through now anyway, but probably in a couple weeks someone else will open.”

The 8,000-square-foot building sits on what was previously a 12,600-square-foot used car lot. A shared internal seating area opens up to a shared patio seating area with fire pits and custom bike racks, although the 950-square-foot, corner-fitting coffee shop does not directly open out to the communal areas. The shop instead offers about 10 indoor tables and a bathroom of its own, with plans for its own sidewalk seating. “We’re a coffee shop, so we’re used to being our own entity anyway,” said Blair, who also imagines patrons wandering back and forth between his shop and the rest of the Zipper.

The overarching vision for the Zipper and other Guerrilla Development commercial spaces is to foster a manageable path of growth particularly for food carts and other small businesses. The Zipper will offer patrons a festive and diverse cart-cluster-like atmosphere, yet with plumbed bathrooms and other brick-and-mortar creature comforts. 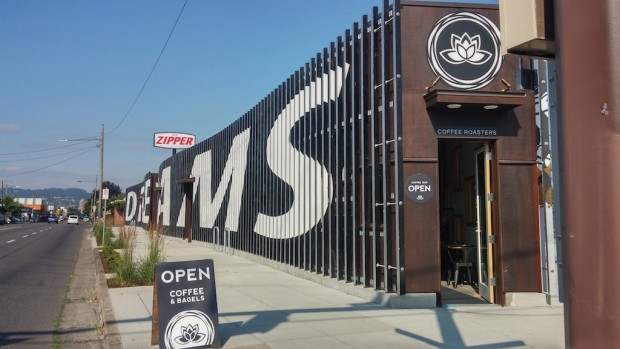 Blair appreciates the hands-on approach Guerrilla takes in assisting transitions for smaller businesses. “They’re incredibly helpful,” he said. “They went with every single business owner downtown to get a business license. They walked us through it. When I was there with them, there were a few times going through the process where the city was like, ‘No, you’re going to have to come back,’ and Kevin [Cavenaugh, owner of Guerrilla Development] would kind of push in and say ‘Well, what if we do this, what if we do that?’ We got our business license in one day, and some people said it would take six months.”

Seven Virtues roasts on a 12-kilo Probat roaster at the Aspect Coffee Collective, a behind-the-scenes communal roasting facility owned and operated as an offshoot of Mr. Green Beans, a Portland home-roasting and brewing equipment and education resource. Ten-ounce canisters of Seven Virtues whole beans are available for sale at both of their locations, and though wholesale is not a focal point of growth, the company does maintain a couple espresso accounts and will sell for events. The new shop prepares exclusively single-origin coffee drinks with a Mazzer Robur grinder, a two-group Synesso Cyncra for espresso, and a Fetco for drip. 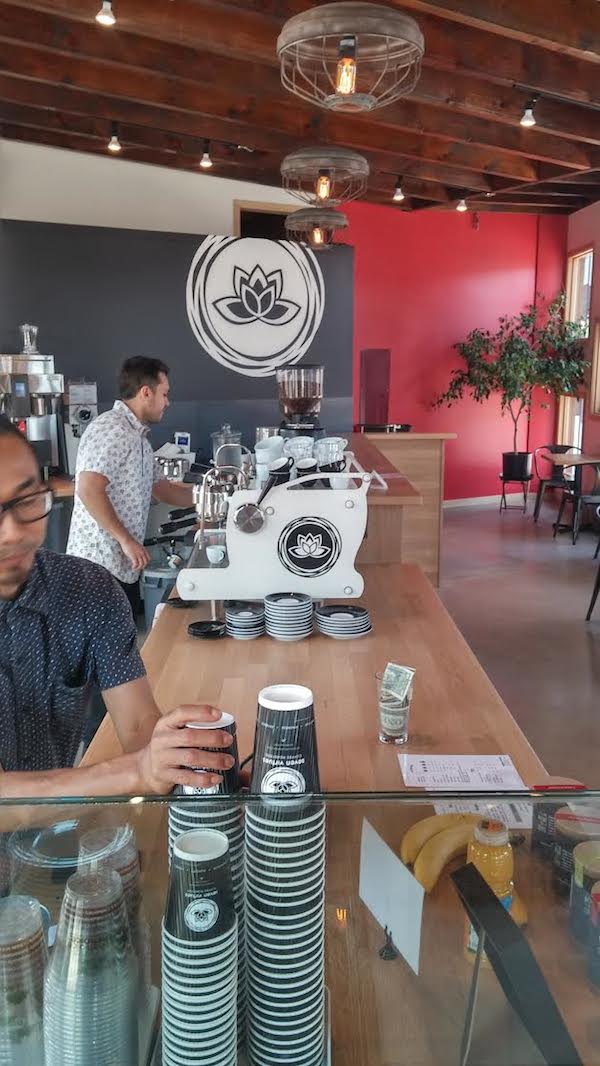 The original Seven Virtues shop on NE Glisan Street offers a full breakfast and lunch menu that includes vegan and gluten-free options baked in-house. In such close proximity to a wide array of quick-bite lunch options, the new spot will focus instead on quicker grab-and-go breakfast items such as bagels and pastries, with some after-hours desserts for the adjoining restaurant crowds.