Hidden Heroes: One Woman’s Fight to Revive a Coffee Community in Opatoro, Honduras 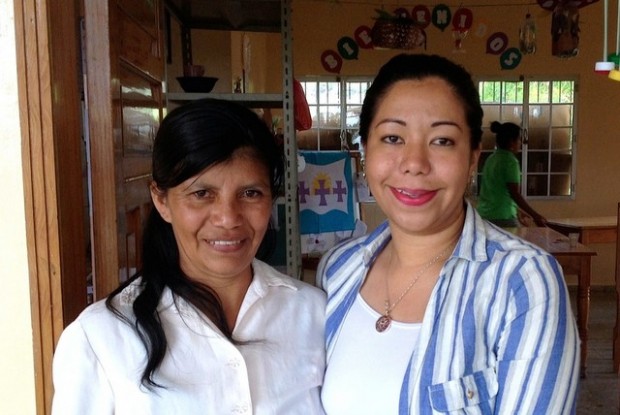 Dunia Martinez pictured on the right. Photo by Hugh Aprile.

Hollywood loves a good comeback story. So when I think of the struggles of a coffee community in Honduras called Opatoro, I can’t help but think of them in terms of a Hollywood script. The pitch might go something like this:

In 2012, Dunia Martínez, newly elected mayor of Opatoro in rural Honduras, began receiving daily visits from coffee farmers looking for help. A disease called coffee leaf rust was ravaging their crop. Young people were leaving in droves to seek opportunity in the big cities of San Pedro Sula and Tegucigalpa. “Don’t go,” she would plead with them. “It’s dangerous, there are gangs there.” They would all nod in response, “We know Madame Mayor, but we need jobs. We need money.”

Dunia, herself a coffee farmer, also considered walking away from coffee and telling her constituents to do the same. “Coffee has let us down,” she thought. But one morning, as she walked through her farm, inspecting the leaves on her plants, she thought of her parents and her grandparents who were also coffee farmers. Coffee is what her family knew. It’s what her community knew. Coffee was more than a crop, it was a way of life. Dunia decided to fight back. Her community would rise again.

Over the next two years, Dunia led a charge to get Opatoro back on its feet.  She didn’t have enough money in her meager municipal budget to fund a recovery program, but she knew that money was out there. She met with government officials in the capitol. She knocked on the doors of aid agencies and nonprofit organizations. She negotiated with reluctant bankers and sought out investors, including coffee companies that were buying coffee from her community.

Two years after coffee rust hit her community, she started to see the tide turning. Farmers were receiving low-interest loans for renovating their farms with new plants that were more resistant to disease. A new training program, jointly funded by the government and coffee companies, was teaching farmers the latest and best technology to improve production and quality. Coffee buyers started to visit the community more frequently, seeking out the high quality coffee produced there. Opatoro coffee was in demand.

One day, a young man knocked on her office door.  She had met him several years before when he was thinking of moving to the capital to work in construction. “I’m back Madame Mayor, I’ve come to take over my family farm.” Dunia smiled. The struggle wasn’t over, but for the first time in years, she felt hope for the future of Opatoro.

Dunia Martínez is the current mayor of the municipality of Opatoro located in the department of La Paz, Honduras. I’ve had the privilege of meeting her several times over the past few months, and I can say that Dunia is just as driven to save her community as the fictional character described in the pitch. Dunia estimates that between 2012 and 2014, about half of the 14,000 residents of Opatoro fled to the larger Honduran cities as a result of the coffee leaf rust crisis, which had decimated a majority of farms in the community. The mass exodus of the community’s coffee producers, as well as the reduced productivity of the remaining farms, led to a sharp downward economic spiral.

What is, for now, more fiction than fact, is the story of Opatoro rising from the ashes of the coffee leaf rust crisis. Dunia explained to me that she allocates around 500,000 Lempiras (approximately $24,000 USD) of the limited municipal budget to support the 2,000 or so remaining coffee producers in her municipality, mostly through the establishment of community-managed coffee plant nurseries. “It’s not close to enough money for what the producers need, but it’s what we have.”

In response to this situation, Dunia has, in fact, been knocking on doors, of the central government, of NGOs, of banks and microfinance institutions — anyone who might be interested in her cause. Some of Dunia’s aspirations for the farmers in Opatoro include the following:

In the Central American coffeelands, mayors like Dunia are often on the frontlines of the battle to save coffee and their communities. Dunia’s leadership gives me hope for the future of Opatoro as a thriving coffee community. Of course, it helps that Opatoro has the right agro-climatic conditions for quality coffee. None of the farms in the municipality are under 1,000 meters in altitude, and Opatoro is one of 19 municipalities in the Montecillos mountain range that fall under Honduras’s first protected origin denomination, “Marcala Coffee.”

Hollywood loves a comeback story — Opatoro’s story could be one the coffee industry would love too.

Hugh Aprile
Hugh Aprile is the CRS Director for Regional Agriculture and Water Initiatives for Central America. He is based in Managua.