Kickapoo Coffee Goes Full Solar, Challenges Other Coffee Companies to Do the Same 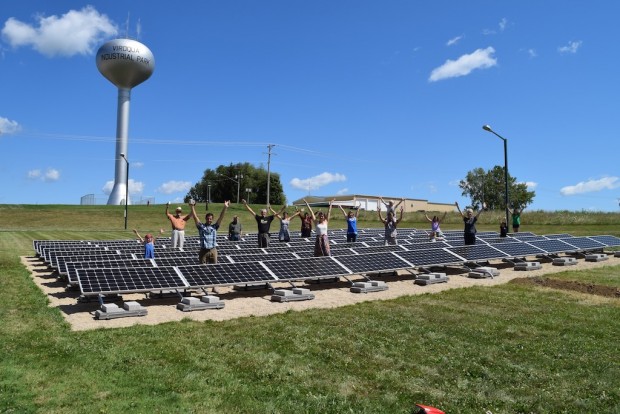 The Kickapoo Coffee team soaking up some rays alongside the 80 new solar panels.

Kickapoo Coffee Roasters has become one of the first commercial coffee roasters in the United States powered entirely by solar energy, with the notable exception of its rare, gas-powered Probat G30.

TJ Semanchin, who founded the progressive coffee roastery along with Caleb Nicholes, recently told Daily Coffee News that the installation — including a 25kW, 80-panel solar array — will pay for itself in energy savings within seven to eight years, eliminating all the company’s electric energy costs and minimizing its carbon footprint. “This is going to offset all our electricity,” Semanchin said. “From a business perspective it’s kind of a no-brainer.”

More important to the Kickapoo team than business in this case are core values of the company related to environmental and social sustainability. Semanchin said he hopes the solar project, which was initiated in Spring of 2015 and completed within months in late July, will represent a challenge to other coffee companies, especially those who speak publicly about sustainability initiatives, either at origin or at home.

“We can’t close ourselves off to these global issues of climate change and we can’t pretend that we all don’t have a carbon footprint,” Semanchin said. “But we can say now that our electric is not contributing to it.” 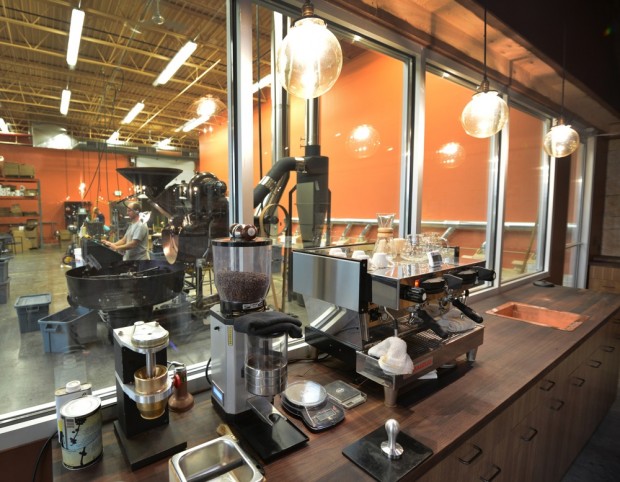 Inside the Kickapoo HQ in Viroqua. Photo courtesy of Kickapoo Coffee.

As with most solar projects for businesses in the private sector, funding for Kickapoo’s solar initiative involved a creative mix of sources. Local renewable energy experts Ethos Renewable Power led the project, helping secure a state Focus on Energy grant to cover 21 percent of the cost. Sue Noble, executive director of the Vernon Economic Development Association — the group that also happens to own the massive former National Cash Register factory building in which Kickapoo has occupied a small section since 2013 — was able to secure a USDA REAP grant that covered another 25 percent of the cost. The remainder of the project costs was funded by local community investors, who will be repaid based on energy cost savings until the system is paid off. Additionally, Kickapoo will benefit from a 30 percent federal tax credit for renewable energy systems.

According to the EPA greenhouse gas equivalency calculator, the Kickapoo solar array represents the equivalent of 17.5 acres of trees being planted.

“It helped that we were working with a company that was really good at navigating the politics of renewable energy,” Semanchin said. “But the design and install of this system, the cost and the size efficiency of the panels — all these things have really improved over the years. Now that we’ve done it, maybe it can prove to other businesses that it’s not that crazy of a concept.” 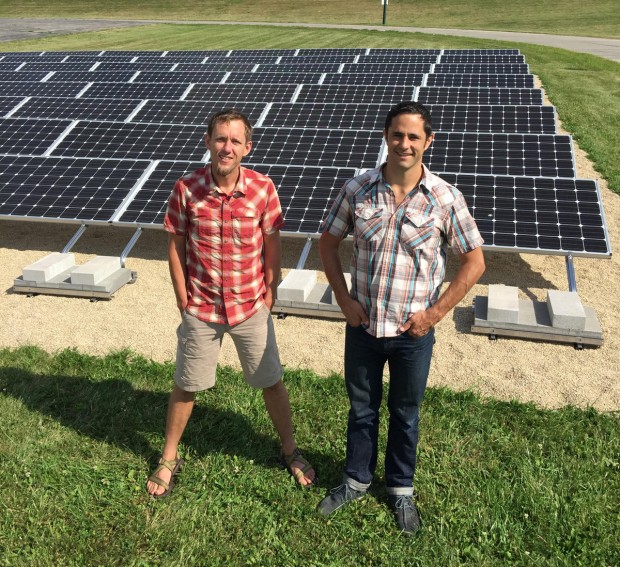 To outsiders, rural Wisconsin may seem an odd place for a progressive energy project, but Kickapoo’s solar array isn’t likely to shock any locals. Located in the beautiful Driftless region of Wisconsin, Viroqua and the surrounding areas became home to what Semanchin described as “back-to-the-landers” in the early 1970s, and many of the vestiges of progressive culture exist there today through new generations of Viroquans. Sustainable farming and food culture are particularly advanced in the area, home of the country’s largest sustainable dairy manufacturer Organic Valley.

Said Semanchin, ” The all-organic, high-end food scene is well-established here and we’re proud to be a part of that.”

(editor’s note: An earlier version of this story incorrectly stated that Kickapoo was the first roastery in the United States to be powered entirely by solar power, with the exception of its gas-powered roasting machine. Mocha Joe’s Roasting Co., in downtown Brattleboro, Vt., is similarly powered entirely by an off-site, 11.28 kW Photovoltaic Tracker system, with the exception of its roasting machine.)

Now, this is the kind of idea from a coffee company I can get behind.
this is 4thwave coffee.

Bravo! I hope wind power & water conservation are in your future plans too.