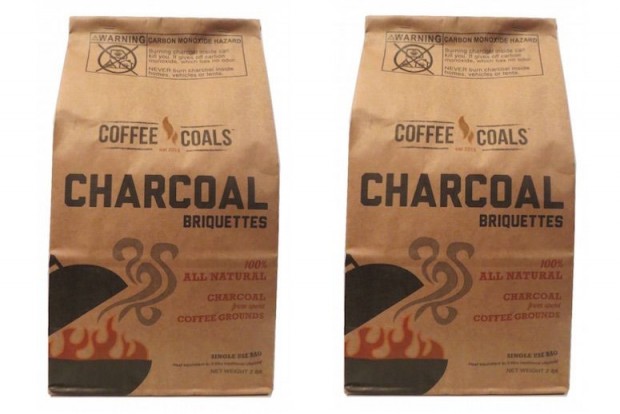 There’s a new product working its way out onto retail shelves called Coffee Coals, a charcoal briquette made entirely of spent industrial coffee grounds. Through a guarded, proprietary process conducted in a facility in West Lafayette, Ind., grounds are transformed into charcoal that contains no petrochemical additives or industrial binders. The coals are bound instead using a natural, edible binder, and because they burn hotter than conventional coal, only two pounds of coffee coal is required to heat a standard backyard grill as opposed to 3.5 pounds of the conventional counterpart, the company says.

Sold in single-serving two-pound bags for a little over $3 per pound, they purportedly get up to cooking temp more than twice as fast as conventional charcoal, maintain that temp for about an hour depending on outdoor conditions, and impart no coffee scent or flavor to the items they cook. “It does not smell like coffee whatsoever,” owner Rich Bruins told Daily Coffee News. “It’s a rich charcoal aroma.”

It’s also a bit more efficient as a waste diversion than it may seem, because while the coal is dry, the spent coffee source material is very wet. “Coffee grounds are usually about 60 percent water,” said Bruins, noting that each briquette is actually comprised of more than twice its weight in waste.

Coffee Coals is a new entry into the brewed-coffee waste-diversion product market, which includes beauty products such as exfoliating soaps as well as other environmentally-minded combustibles, such as Java Logs for burning in a fireplace instead of wood. The London-based Bio-Bean company also collects spent coffee to repurpose into biomass fuel “pellets” capable of heating entire buildings, and they soon may also generate coffee-based biodiesel to fuel public transit systems.

The inspiration first came to Rich Bruins while doing missionary work that involved researching solutions to problems faced by farmers in a coffee-growing community in Guatemala. With his background in mechanical engineering, he helped identify the community’s need for more efficient conversion of field waste into usable energy, then traveled to Guatemala in the summer of 2013 to help implement a process of compacting scrap vegetation into blocks that burned more efficiently. 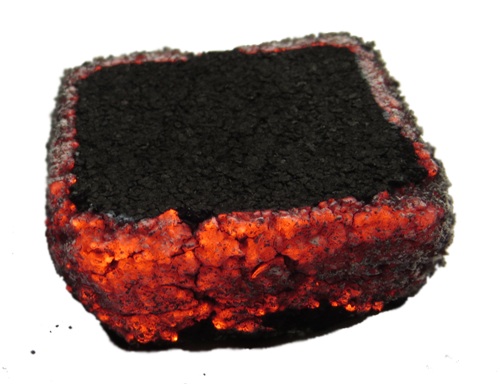 “We would take their biomass — their field waste and animal waste — and dry it out, and that would break down the cell walls,” Bruins told Daily Coffee News. “Then we would soak it in water, so it would become this nice sticky mixture, and then it was able to be compressed into a briquette and then dried again as a final product.” It was during the 18 months of communication, research and preparation for the Guatemala implementation that provided the impetus to put some of the same principles to work on U.S. coffee waste.

It was toward the end of 2013, after returning from Guatemala, that Bruins created his first coffee coal briquette. He then took time to perfect the method and chart out a business plan before quitting his mechanical engineering job in January of 2014 and going into the coal business full-steam. The first wave of the product was made by hand to test the market and see if there would be any interest at all. Encouraged by the feedback he found through local retail outlets in the Spring of 2014, he paused again that fall and was successful in finding investors to scale the operation bigger.

“There’s a lot of factors that go into it, some of them environmental, some economical,” said Bruins. “Economically, there are coffee companies that have to pay to get rid of their waste.” Bruins said that depending on the nature of the product made from coffee — a flavor or an extract, a ready-to-drink beverage, a jarred instant coffee — not all spent grinds are in suitable condition for composting, and not all companies are inclined to dispose of their waste via compost anyway. Plenty of grinds wind up in landfills, or are incinerated along with other wastes.

Coffee Coals’ pitch to coffee companies is that there is not only a financial incentive through the free removal of heavy coffee waste, but the model also follows a waste-repurposing eco-mentality that can be shared with consumers, investors and other audiences. Bruins also contends that the superiority of Coffee Coals to conventional coal justifies what portion of the company’s source material is rerouted from use as compost. “It’s a good nitrogen source,” said Bruins, “but it’s also kind of acidic. So in specialized applications — if I remember right, berry-producing plants, some fruits, and pine trees I believe like slightly acidic soil — it can be beneficial there. But for a whole lot of plants, it’s not the best compost.”

As far as the clean, organic, specialty-grade grinds that gardeners and local composters like taking off the hands of progressive local coffee shops, the Coffee Coals company is not in competition, as it’s only worth their while to partner with high-volume industrial-scale companies to produce a commercial-size batch of coal. Although if a regional coffee company with at least few outlets wanted to engage the Coffee Coal company for a sort of private-label partnership in order to brand and sell coal made from their own spent grinds, Bruins wouldn’t rule it out. “It takes a lot of material to make our charcoal,” said Bruins, “so if we’re going to go through the effort of doing private-label and all that it would have to be a substantial roaster, but it’s definitely something I would consider.”

For now, Coffee Coals are still working their way out onto regional grocery and hardware store shelves and are also for sale on Amazon, although it could rapidly grow far more widespread should the company’s intended model prove successful. As early as next year, the coal company hopes to concretize its symbiotic relationship with factories by setting up multiple permanent manufacturing facilities of its own in warehouses and other buildings on or very near the campuses of their large-scale coffee manufacturing partners.

“We want to start with the companies that are most sympathetic to the cause, and are willing to give the most incentives to work with us,” said Bruins. “We’ll set up shop in their backyard and make charcoal that way. Then as we grow, set up at more coffee facilities.”