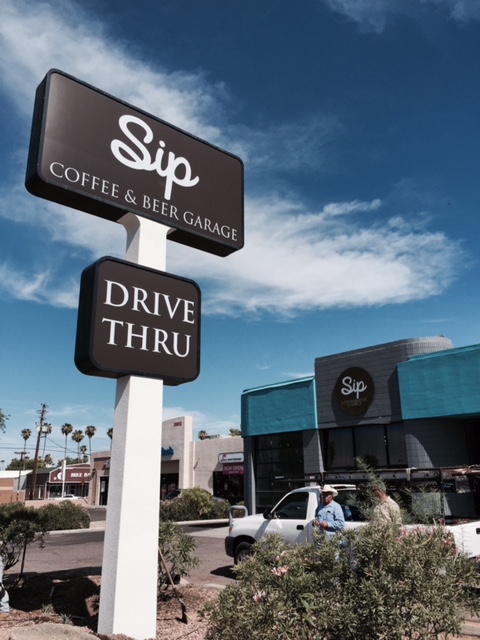 When Travis and Tida Radevski opened the Sip Coffee & Beer House in early 2014, it was intended to introduce a slice of heartfelt small-town living into the touristy hum of Old Town Scottsdale, Ariz.. Serving coffee roasted by the Tempe-based Cartel Coffee Lab alongside a full wet bar, a small food menu and regular live music, the atmosphere might swing from relaxing to exciting over the course of the day, but the goal is for it to always be a comfortable, communal and progressive spot to hang out.

Only 15 months later, the Radevkis are at it again, this time in bustling central Phoenix, transforming a former oil change service station into the Sip Coffee & Beer Garage, slated to open in October 2015.

Travis Radevski told Daily Coffee News that the Sip coffee program, while creative, is also pretty straightforward and refined. “Jason Silberschlag, the owner of Cartel Coffee Lab, is sort of a mentor of mine,” said Radevski, “and he has a very strict policy that he follows with his coffee, and it’s ‘no foo-foo, let the beans talk.'” Radevski said Sip embraces Cartel’s mostly light-roasted style and respects the purity and quality of the coffee by shying away from specialty drinks. At a bar where spirits also flow, some cocktail experimentation is irresistible, although even then, they try to keep it pure and classy.

“We’ve been playing around with some different drinks with cold brew and messing around there, but it’s trying to stay pure to the form and to the bean, and not really overpower the bean” said Radevski, adding that the Sip House bar has consistently served a popular, traditional espresso martini, and has been playing around with a cold-brew Manhattan. “Our bartenders are great at following the trends and seeing what’s out there, seeing what people are experimenting with.” 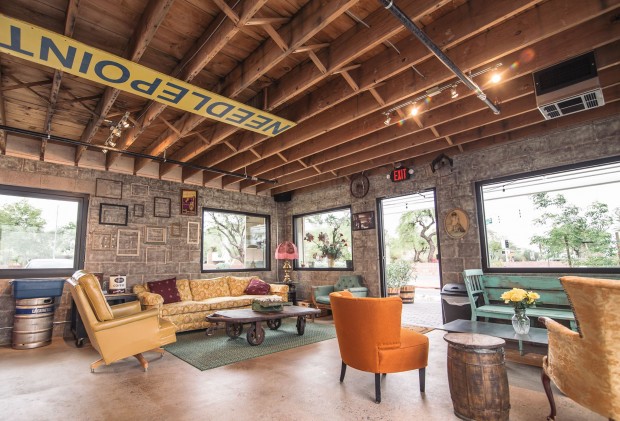 Inside the Original Sip Coffee & Beer location in Scottsdale

The new location will be only slightly bigger than the original one, and with that extra space Radevski plans on building out the alcohol counter to be on par with the coffee counter, including 20 feet of bar for each side of the service coin — but this does not necessarily represent a shift in focus. “We’re just as dedicated to coffee as we are beer,” said Radevski, noting that in the original location, they’d wished that they could have built a bigger bar, but simply didn’t have the space. Of the Garage, Radevski said, “In this location, we have the ability to build that bigger bar.”

Cartel will remain the go-to coffee for cold brew at the Garage, although they will be rotating through a variety of other area roasters, switching companies with each bulk order. Presently that rotation includes the Scottsdale roaster Altitude Coffee Lab, Presta Coffee Roasters from Tucson, Bergies out of Gilbert, and the Piexoto Coffee and Riviera Coffee companies, both from Chandler.

Naturally a business so committed to an evolving coffee program has entertained some notions of roasting its own, especially as it is expanding so rapidly. “We’ve considered it. One of our current baristas, that’s his goal, to get into roasting,” said Radevski. “We 100 percent plan on going down that road when it’s appropriate. If we’re lucky enough to get a third location, I think it would warrant us doing our own roasting.” In the short term, however, innovations such as a new bakery kitchen and staff pastry chef bringing all their baked goods in-house will keep the business moving forward.

Another game-changing innovation expected to bring about a major boost in revenue is a coffee and pastry drive-through window, which will be built into what used to be the westernmost oil-change bay of the new building. The fully enclosed drive-through will offer drivers a welcome momentary respite from the punishing Phoenix sun, and will also be exceptional for the true craft coffee drinks it will serve, prepared on a classic two-group Linea identical to the one that will be behind the internal coffee bar. “We’re hoping we can pump the drinks out as quickly as we can, without jeopardizing or hurting the integrity of the coffee,” Radevski asserted. “We’re still going to pull the length of shot that we feel is appropriate, we’re not going to sacrifice that just to speed up the line.” 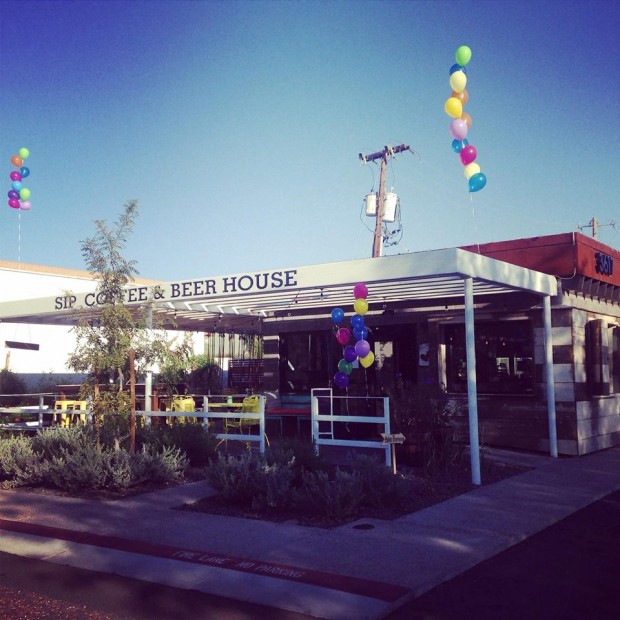