At Red Bay Coffee, A Pioneering Profit-Sharing Model for All Workers 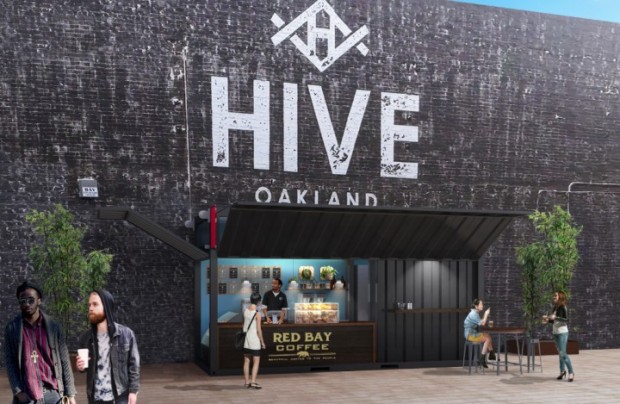 Rendering of the forthcoming location at The Hive by Gensler Architects

Progressive East Bay entrepreneur Keba Konte has enjoyed quite the winning streak the past couple years, although he’s not in it for himself. The Red Bay Coffee founder and proud citizen of Oakland, Calif., strives primarily to do right by his local community, and if all goes well, he won’t stop there. Konte aims not only to diversify the predominantly white male world of specialty coffee roasting and service, but also to disrupt the traditional café business model in the process.

With the fast-growing roaster’s first coffee service kiosk currently under construction, the plan as it stands is to establish a profit-sharing arrangement among workers — splitting 100 percent of the profits evenly among everyone on staff, based on hours worked per month. Furthermore, hiring efforts will focus specifically on attracting and assisting workers that otherwise experience barriers to employment related to race, ethnicity, gender, size, age, incarceration records and other challenges.

Red Bay Coffee was founded in February of 2014, roasting coffee in a tiny space in the converted basement of Konte’s Fruitvale neighborhood home, which they then sold and brewed at pop-ups, market stands, and a few wholesale clients around town. This past June, Konte pitched the progressive profit-sharing Red Bay model in a campaign on Kickstarter and collected a happy boost in excess of $87,000 from over 800 backers to fund the establishment of the first branded café. That café will be housed within a converted shipping container on the grounds of a new mixed-use commercial development called The Hive, located on Broadway at 23rd Street in Uptown Oakland. 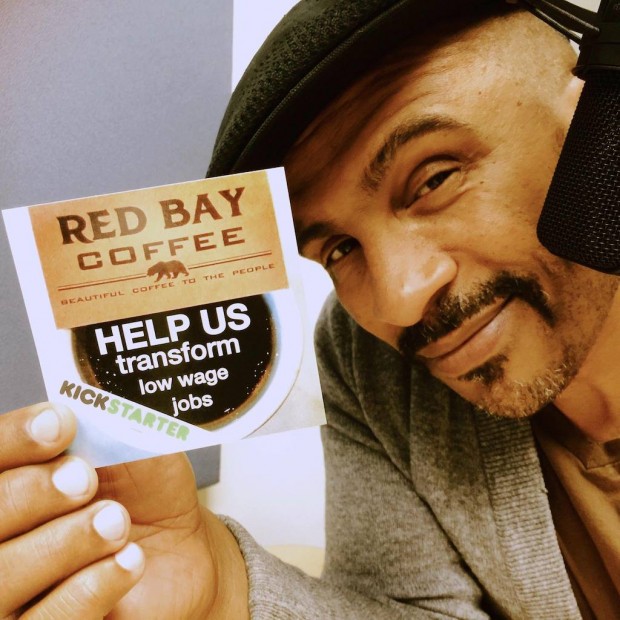 At roughly the same time this past summer, despite fierce competition from other local coffee start-ups, Red Bay was also awarded the coveted and lucrative spot at the Downtown Berkeley Saturday Farmer’s Market formerly occupied by a once-fledgling Blue Bottle. After rounds of tastings and much deliberation, Red Bay narrowly won out over Highwire Coffee Roasters, another progressive East Bay outfit.

Konte’s goal with the upcoming Red Bay café is to transform traditionally low-wage jobs into gainful employment that provides a living wage — at least $20 per hour, according to projections. “It’s an idea. We’re going to see how this thing goes,” Konte told Daily Coffee News. “We’re all hoping for the best, and we’ll adjust and improve as we go along. Given that we haven’t seen this done exactly like this before, we’re just figuring it out as we go.”

The general idea is for all entry-level workers to start at the legal minimum wage plus tips, then receive an even cut of the café’s overall monthly profits based on the number of hours worked. Apart from that groundbreaking departure, everything else will be pretty standard in terms of employment at a café. Raises to the hourly wage will still happen and will be merit-based. The staff will be structured and tiered, including shift leaders and salaried management positions. All full-time workers will eventually receive a benefits package, and everyone, from owner Keba Konte down to the newest hire — after an approximate 30-day probationary period — will get an even cut of the profits.

While there are plenty of non-sales-related factors that affect monthly profits, such as the need to hire new workers, upgrade equipment, alter the shop’s hours, and so forth, those decisions will still be made by café leadership, consisting of Konte and his management team. But they will not be made without input from his front line as well. “The way I run my other cafés is I have an open ear to the staff,” Konte said. “They’re right there on the ground, they’re interfacing with the customer more so than I am. I definitely take their input in a valuable way.” 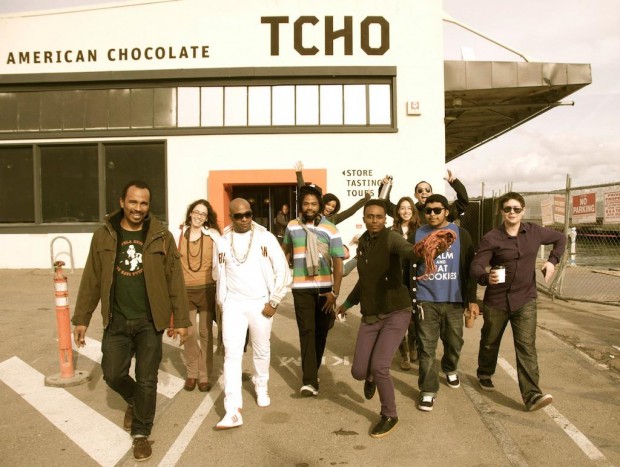 While the egalitarian model is new, Konte is no stranger to the industry himself. In 2006 the self-made coffee maven co-founded North Berkeley’s Guerilla Café, an overtly political Afro-chic shop that also happened to be the first coffee-dedicated wholesale café client of Blue Bottle. It should be noted that Konte is also no stranger to politics, in that before his life in coffee, he was a professional photojournalist. Konte documented the election of Nelson Mandela in South Africa in 1994, as well as the Million Man March in Washington D.C. in 1995. His work as a photographer also extended into the commercial realm of music photography, including album covers and other shoots with popular hip-hop artists ranging from Master P, MC Hammer, Andre 3000 and Goodie Mob-era Cee Lo Green.

In 2012, Konte opened a second shop called Chasing Lions Café, located on the campus of the City College of San Francisco. That one served Four Barrel, to which Konte was drawn for its admirable sourcing practices, attractive branding, overall quality and just for the sake of something new and different. By that point he’d been tinkering with roasting coffee at home for several years with a wooden paddle and a wok, until finally in 2013 he completed the Boot Coffee Master Roasting program.

Red Bay was founded at the “first crack of 2014” as Konte likes to say. At the beginning, the entire Red Bay “Coffee Dojo” production space was housed within the basement of Konte’s Victorian home in Fruitvale, where they roasted on a San Franciscan one-pounder until scaling up into a Probat L12. The L12 has for the past six months lived offsite, in a tiny space leased in the corner of the kitchen of a nearby fried chicken restaurant. The roaster fits there and operates up to code, but there’s no storage, which makes it really only the slightest bit more feasible than fitting the entire operation in the basement.

“We literally bring our greens, several hundred pounds, there every roast day. And we bring everything roasted back,” said Konte, adding that the cumbersome process occurs up to four times per week. “The team that we have, they don’t know any different, but it’s hard work. But it was the situation that enabled us to get going, and be independent.” The Coffee Dojo in Konte’s basement is home of Red Bay’s cupping, brewing and espresso training lab, green storage, and roasted coffee bagging, packaging and labeling workshop. 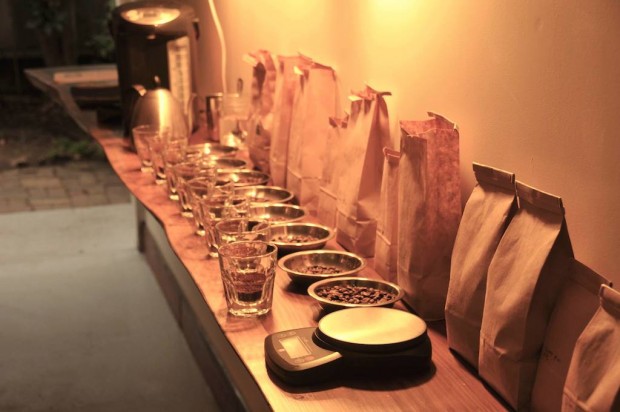 at the Coffee Dojo

Currently Red Bay serves pourovers and cold brew, sells bulk beans in refillable quart-sized jars at the Berkeley Farmer’s Market, and operates a regular Friday pop-up outside Miss Ollie’s at Swan’s Marketplace in Oakland. Konte expects that Red Bay café space — involving the conversion of a shipping container — will be ready for business by November of this year, at which point Red Bay will join Drake’s Brewing Company, a restaurant, a bakery, Numi Tea, and the co-working space and entrepreneurial event venue Impact Hub Oakland at the Hive.

Impact Hub Oakland is an especially important future neighbor of Red Bay, as they’ve been an instrumental ally in helping Red Bay acquire the space. The coffee shop will be subleasing from Impact Hub, drawing power and plumbing from a shared wall, and it was the Hub management team that connected Konte with the building’s development group. Said Konte, “They’re the ones that invited Red Bay to bring a coffee operation there.”

The bustling location and accessible rent would be major assets to any startup but especially one that needs a healthy profit margin right off the bat in order to prove an important social economics theory.

Konte hopes not only to open other Red Bay profit-sharing coffee locations, but also to inspire other companies to follow in its footsteps, both within and beyond the coffee industry. “Most readily from manufacturers,” said Konte. “Whether it’s beer, baked goods, something where there’s a strong brand presence. We proved with our Kickstarter that people are into the idea and they want to support it.” 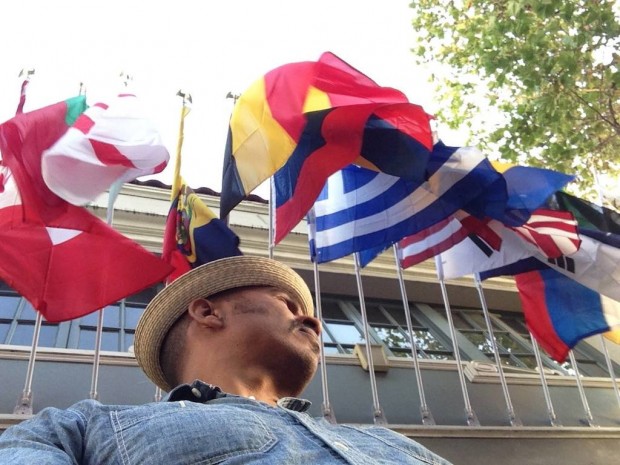 Konte also noted the inherent difficulty in scaling up a business that, rather than banking and building on its profits, splits them to be taken home by the workers. Of start-up capital and initial returns, Konte said, “If someone puts that money up, they’re risking it, they can’t just give all the profits to the workers. Not only do they need to recoup their investment, but they need to be rewarded for their risk. If the crowd is funding this capital start-up, then that alleviates the risk of the entrepreneur.

“But how do we scale up the investment? I think the best that we can do right now is to establish this model, document what we’re doing, share the challenges and the successes that we’re having, share the stories and the impact that we’re having on the workers. If we pull it off and it’s really having an impact, I think we or someone else will find the solution to capitalizing these kinds of operations in the future.”

Go Konte! Good for you, and your employees!