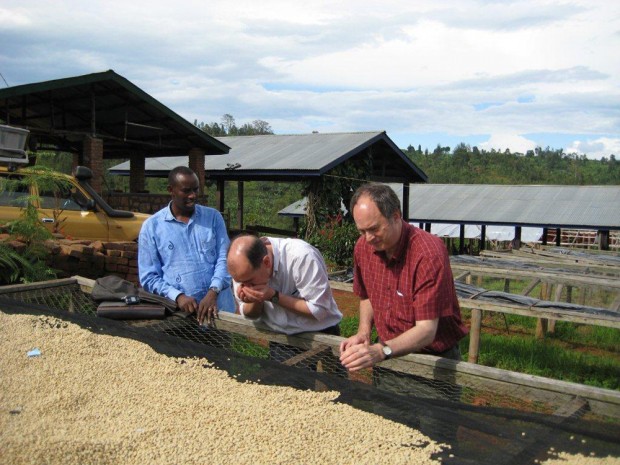 Despite the incredibly fertile coffee ground found throughout the African Great Lakes region — which comprises coffee-producing countries including Rwanda, the Democratic Republic of Congo, Kenya, Burundi, Tanzania and Uganda — many producers there have been hampered in recent crop years by generally low yields and potato taste defect.

Bolstered by a $1.8 million cooperative agreement with the U.S. Agency for International Development being formally announced today in Washington D.C., a team from Michigan State University is launching a three-pronged effort to address those issues through applied research, farmer capacity building and policy engagement.

The initiative, beginning in Rwanda, is called the African Great Lakes Region Coffee Support Program. Part of the U.S. government’s Feed the Future initiative, the Great Lakes program represents a significant investment in origin-level assistance in one of the poorest parts of the world, where coffee remains a critical source of income for millions of smallholder farmers.

In an announcement yesterday, the MSU news service noted that Rwanda, in particular, has found international success in the specialty coffee market, but that success has been mitigated through recent low yields and infestations of antestia bugs, which cause the potato taste defect.

MSU has a long history in agronomy development both domestically and internationally, and researchers from the university have been working on the ground in Rwandan coffeelands for the past 15 years. But this is not merely a farm-development program. The MSU team says it plans to help Rwandan producers improve access to the international specialty market through numerous strategies, including establishing a “policy environment that will provide incentives for producers to invest in their labor, land and cash resources.”

Industry and governmental partners in the program include Starbucks, the Coffee Exporters & Processors Association of Rwanda and the National Agricultural Export Development Board of Rwanda. From MSU:

A seemingly fundamental contradiction is that coffee productivity in the region is among the lowest in the world, yet international buyers consistently rate Rwandan coffees among the best in the world. Program leaders will work to create an environment that will increase investments and link prices to quality.

The team also will increase awareness of the issues through radio, SMS and other outreach channels, publicizing how they affect the entire value chain, from growers to coffee baristas.

For more on the challenges facing the region’s coffee producers, particularly those in Rwanda and Burundi, we recommend searching your library for the May/June 2015 issue of Roast Magazine. In it, Artisan Coffee Imports President Ruth Ann Church, who has been involved in the Great Lakes program development through her role as a graduate researcher at MSU, takes a detailed look at farm-level economics in the region, while proposing solutions to address existing issues that could serve to benefit the coffee industry as a whole.

The May/June issue is available here.