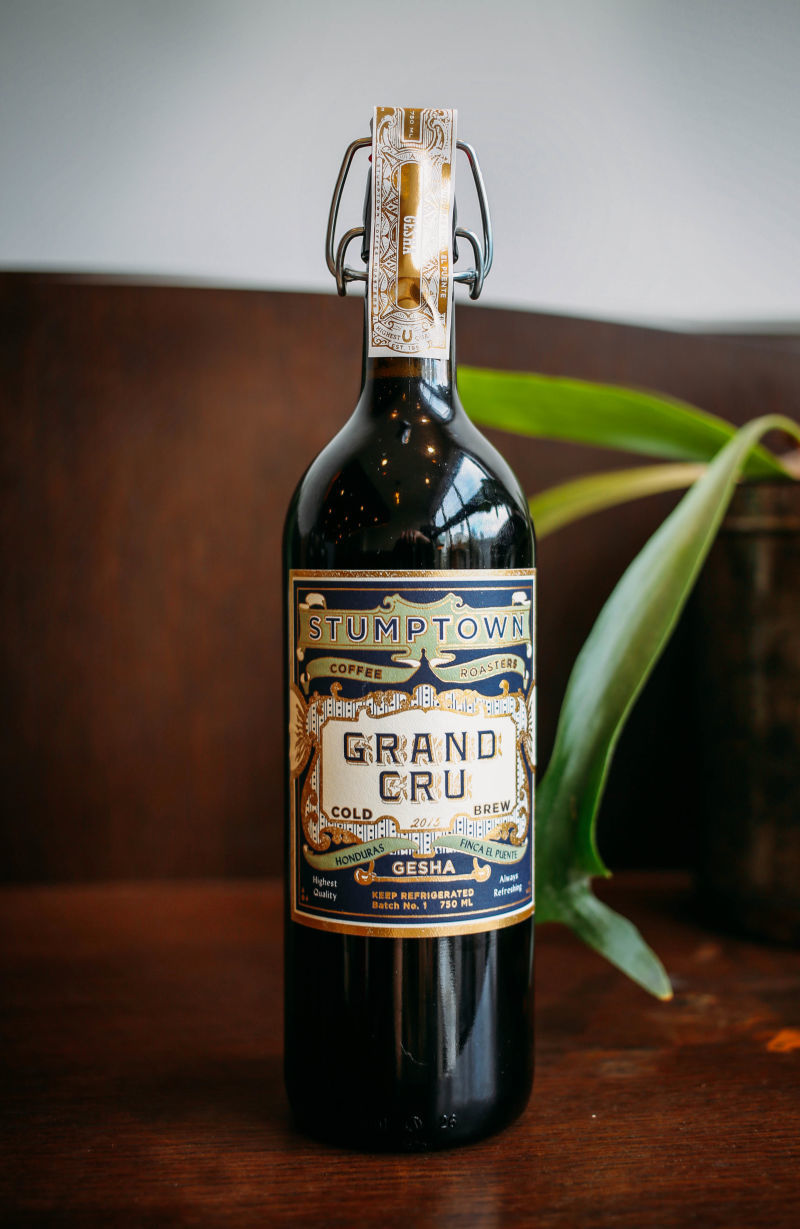 Back in April of this year, Stumptown Coffee Roasters broke new ground in the ever-expanding field of cold brew coffee by releasing a cold brew packaged in a nitro-pressurized can. The company raised the bar once again over this past weekend, as it rolled out its annual Grand Cru coffee not in whole bean format as they’ve done in years past, but as a high-end bottled RTD cold brew product.

The coffee, packaged in a wine-like 750-millileter bottle, is not only a single-origin from Honduras, but a Gesha, which is perhaps the most recognizable and highly-reputed of arabica varietals.

Stumptown cold-brewed the entire lot of Finca El Puenta Gesha for the 2015 Grand Cru bottling. “This year we just looked to do something different,” Stumptown Director of Cold Brew Diane Aylsworth told Daily Coffee News. Online teasers for the product were disseminated through social media earlier in the week, prior to the Friday, Nov. 6 unveiling of the new product, which appeared on Stumptown branded café shelves the same day.

Small amounts of the top-of-the-line cold brew were also kegged for limited-time service in Stumptown cafes. Given the precious nature of the premium, low-yield crop, the Grand Cru Gesha will not appear on every grocery shelf where Stumptown beans or beverages are otherwise sold. “It’s a very limited production,” said Aylsworth, stating that draught and bottles sales will continue in all nine Stumptown cafes through the end of the year, for as long as supplies last.

Based on previous years’ success with crops from the Finca El Puente in Honduras, which Stumptown has purchased since 2012, the company decided to highlight this year’s Gesha through a brew method about which they’re especially passionate. “Cold brew in particular brings out different flavor notes,” said Aylsworth. “It really highlights the delicateness in certain coffees.”

The label, designed in-house by Stumptown Lead Designer Jenny Censky, calls to mind a sort of combined aesthetic of vintage liquor bottles, certain European beers and modern-day boutique artisanal bitters. “We were looking to overall redesign our Grand Cru packaging, to take these special coffees and put them in elegant packaging that reflects how beautiful and elegant the coffees are that inside,” said Aylsworth, noting the sophistication of the wine-style size and shape coupled with the coolness and masculinity of a swing-top seal.

Going forward, Aylsworth said she plans on continuing to do a Grand Cru cold brew bottling annually. “I’m not sure what next year will look like or be,” said Aylsworth. “But it’s a way of highlighting the farm, the varietal and the producers via cold brew that hasn’t really been done before.” Aylsworth also stated that there’s yet another Stumptown cold brew surprise coming in January 2016. Whatever that might be remains currently undisclosed, though we will report as soon as the information becomes available.

The Finca El Puente producers Marysabel Caballero and Moises Herrera were present in Portland for the parties and events to celebrate the fruits of their handiwork, which are now on sale in all Stumptown café locations with a sticker price of $28 per bottle. That list of cafés is also on the rise, as Aylsworth reported that a new Stumptown retail location will be built into the upcoming Ace Hotel currently under construction in New Orleans, La. It will be the company’s first location in New Orleans and is slated for opening in February, 2016.