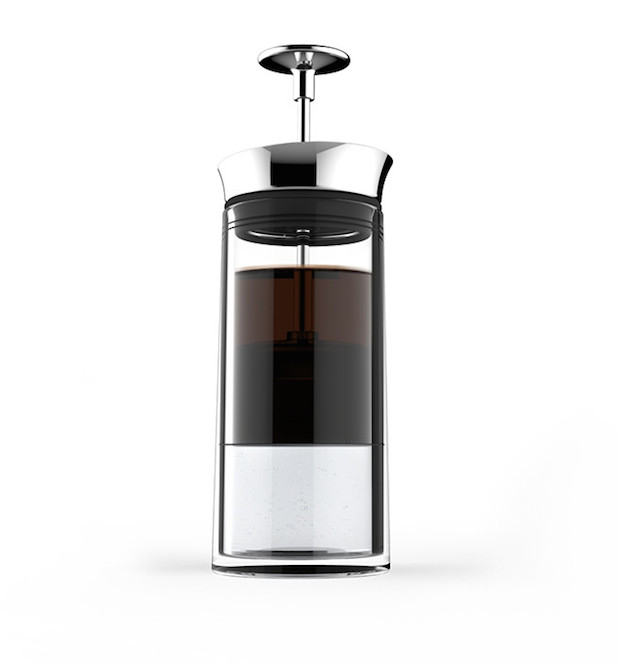 All images courtesy of American Press.

When water and coffee are combined for an active method of brewing, it’s usually the water that’s moved through the coffee and not the other way around. Yet with a novel brewing system called the American Press, the opposite is true: grounds contained in a sealed filter basket are manually pushed through the water, which presents an intriguing new set of variables to consider.

Factors such as water temp and input ratio are familiar, while the relationship of dose and grind with brewing duration and water pressure as manipulated in real time by the user’s manual pressing technique — the pushing of the coffee basket down through the water — constitutes a new and unexplored interplay in the brewing process. So while the American Press looks very much like a French press, it actually has more in common with Aeropress and espresso in terms of fundamental brewing principles.

The production process for the brewer is only just approaching its pre-manufacturing fundraising stage, having achieved certain social media goals prior to a scheduled Nov. 9 soft-launch of a formal IndieGoGo crowdfunding campaign that kicks off in earnest the following day (update: the fundraising campaign is now live here). Yet the device itself and the product rollout plan have been in steadfast development for more than four years.

The American Press has gone through several rounds of prototyping and already appears in several polished-looking promotional videos. Its inventor, Alex Albanese, has taken it to various roasteries and cafes in the Detroit area for taste and experience testing among professionals and consumers alike. He believes that the American Press will hit a sweet spot between usability and innovation, having an Aeropress-caliber impact on the connoisseur demographic while also appealing to coffee novices with its familiar form, simple process and easy clean-up.

The brewing carafe is a double-wall insulated Tritan, which is the same clear, resilient, BPA-free and dishwasher-safe co-polyester resin used in Vitamix pitchers, CamelBak bottles and other popular vessels. The top cap, handle, plunger and filters are all solid stainless steel, including a pouring spout designed to be drip-free. The structure of the filter basket is also Tritan. The seals around the filters are silicone, which fit tightly enough to direct positive water pressure but are smooth enough for easy operation.

The lower filter is wider gauged for better water flow into the coffee, while the steel mesh upper filter is spec’d to a filtration fineness of 150 microns, which is finer than the Able Disc Fine though not as fine as the 60-micron wire-mesh Kaffeologie S Filter. Albanese has stated that if demand is there, an optional super-fine filter can be designed and included later, as the filters are easy to install and remove from the device. 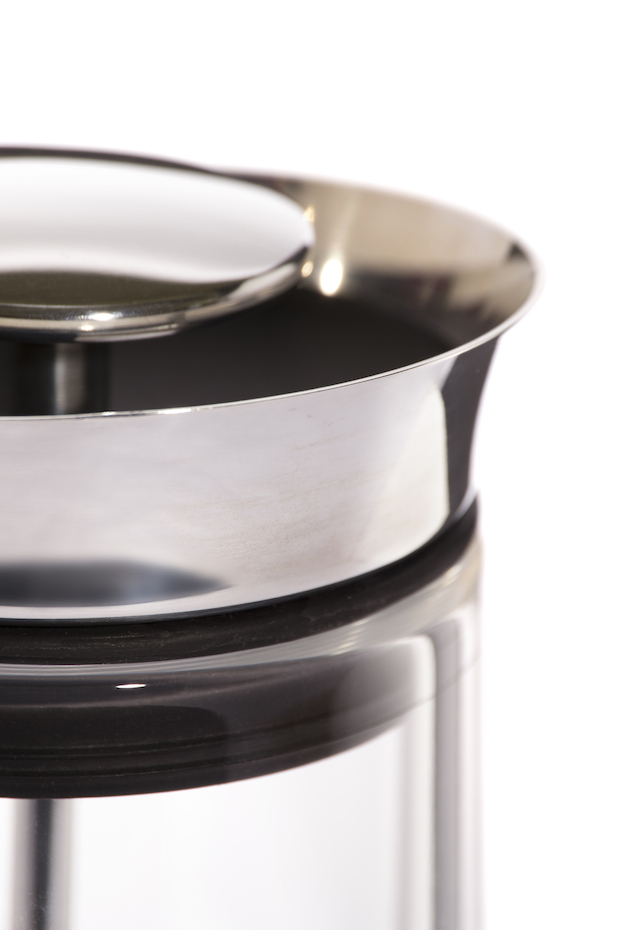 Albanese, also the founder and CEO of the American Press company, is a self-described “washed-up physicist” with a background in applied physics and human-centered design, which is the approach to design from an anthropological perspective, studying closely how people interact with products and looking for unmet needs. As a longtime coffee-lover, Albanese was naturally drawn towards coffee-related products, and found himself studying the way people interact with French presses.

“It’s not that hard to clean out a French press, but people just don’t like doing it,” Albanese observed. So initially the goal was to make a French-press-like brewer that was simply easier to clean, although soon after making his first few prototypes, Albanese realized there was much more to his idea than easy clean-up.

“I try to avoid overstating the ‘easier to clean’ part,” said Albanese, noting that the hands-on nature of the brewing method coupled with its spectacular display of the brewing event are the aspects more central to its appeal. “To see the column of clear water just kind of disappearing and turning into a column of coffee is one of the most interesting things about it. It really is this sort of magical water-to-coffee moment, it’s very visual, it’s very engaging.”

The name came about not in an effort to wave any flags, but as a means to differentiate his design from the French press — which is itself actually Italian — as well as simply due to a distaste for the portmanteaus and made-up words that dominate consumer goods these days. Meanwhile, prior to pursuing the American Press dream, Albanese had put his research skills to work for other heavy hitters in the consumer products industry. This included some consulting work for Dyson, the makers of vacuum cleaners and bladeless fans.

“They’re all about prototyping,” said Albanese of the Dyson company, which imparted in him the importance of investing in pre-manufacturing fine-tuning as he set out to make the earliest American Press prototypes himself. Said Albanese, “I spent four months in a machine shop, walking in initially and not even knowing how to use a drill press. I didn’t know how to use a tool to save my life.” 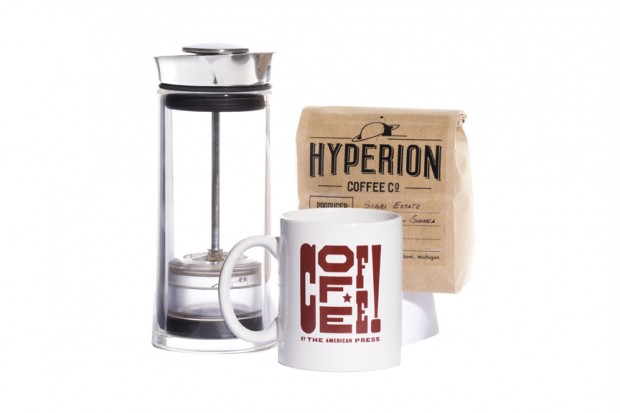 Albanese considers prototyping to be a form of insurance against problems down the line. “It doesn’t matter who you are, it could be Dyson, it could be Bodum, it could be anybody,” he said. “You don’t know for sure that your first run at tooling is going to work.” Yet while bigger companies have the finances to cover additional runs of tooling if the first run is faulty, the fledgling American Press company does not, which makes the greatest possible extent of certainty an even more important asset.

“What I’ve done with this, in addition to all the other homework, is put a lot of work into prototyping to make as sure as possible that we can just cut a check for tooling and it’s going to come out right the first time around,” said Albanese, “which is also to the point of not just getting the product to crowdfunding backers, but getting it to them as fast as possible.”

The business plan depends on the crowdfunding campaign that Albanese and his team of marketers and consultants have been preparing for months. Albanese’s strategy of Facebook and other social media benchmarks, combining market research with valuable pre-campaign word-of-mouth publicity, calls to mind another recently successful coffee-related project: the Precision Coffee Grinder by Handground, which made concerted social media and publicity efforts prior to launching a campaign that set a goal of $35,000 and netted over $300,000.

Albanese says that after all these years and so much invested in expensive prototyping and other preparations, the friends-and-family money tap has been tightened off, but if the campaign is wildly successful right off the bat, he thinks he might be able to wring out a few more behind-the-scenes loans to cut a check for tooling before the campaign is even over. “I can honestly say that if the campaign blew up the first week, and I could get the folks that have gotten me this far to just cut the check I need for tooling, and everything went really smoothly, then I could potentially get these to people about three to five months after the campaign closes.”

While the likelihood of a first-timer’s manufacturing endeavor going “really smoothly” may seem slim, Albanese is optimistic even there, having pursued factories he learned about through industry connections. Unable to find a manufacturing plant on American soil that could do all that needed to be done, Albanese settled on a factory overseas that has “made stuff for the big boys,” including some well-known and well-reputed brand-name products. “They know what they’re doing, they probably make half the stuff that’s in Bed Bath and Beyond,” said Albanese. “It’s a pretty hardcore, high-end factory.”

“If I were to plan for delays, what I would be telling people is still probably above average,” added Albanese, who believes the worst case scenario would be six months after cutting a check for tooling.

The American Press designer envisions a scenario in which the product is introduced to patrons in service environments rather than to shoppers in retail stores, in hopes that people get to see and experience the brewing process while also learning about coffee in general. “I think it would make a great experience for people at a restaurant or café, and they would walk away with a much more in-depth understanding of the product than if it were just sitting on a store shelf,” said Albanese, who reported having already engaged in extensive discussions with one national department store chain. 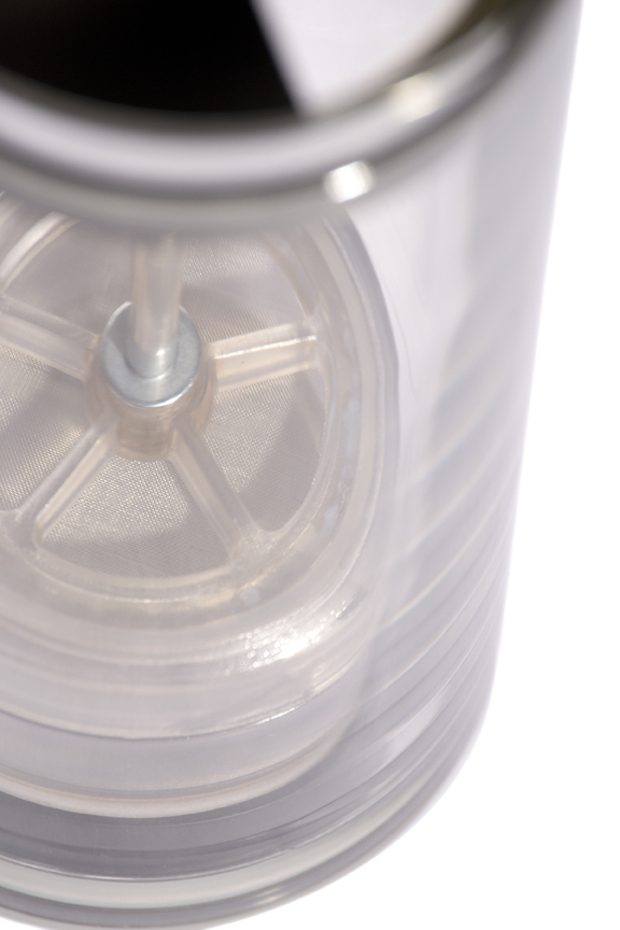 Yet he’s averse to going the department store route for reasons beyond the non-interactive nature of a static shelf display. For one thing, cafés see the novelty as exciting and attractive, whereas department stores tend to view innovation as problematic in terms of product recognition and categorization. Moreover, Albanese is reluctant at this point to sign any contracts with retailers whose primary objective seems to be to drive the retail price of a new product down as far as possible, without considering its effect on the quality of the product. Said Albanese, “I really care about this product, I’ve invested a lot of time in it. I have no interest in making a product that I don’t believe in.”

Albanese said that future products and accessories in the American Press line may include additional filters for other applications such as steeping tea, or a glass carafe once there’s money in the budget for further R&D. Before going higher-end, though, he intends to introduce a lighter-weight model that is more geared towards camping and travel, that would also have the benefit of a lower price point. As the current model is essentially a single-serving brewer, he also intends to develop a larger model for multiple servings at once. For now, though, Albanese believes that the ease of use and the enjoyment of the spectacle of the American Press will inspire users to take pleasure in making multiple brews in a row, taking turns watching a magical “water to coffee” moment unfold again and again.