The Top 30 Coffees of 2015, According to Coffee Review 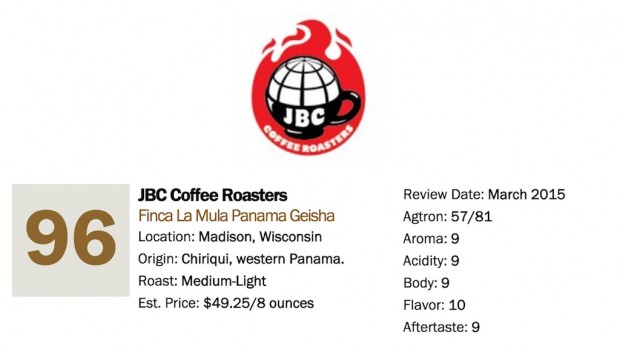 The $120-per-pound Geisha has mostly sold out from JBC’s warehouse, but the Coffee Review team described the coffee — which earned 97 points on a 100-point scale — as having “elongated beans and a distinctive floral and chocolate cup,” while being immense, sweet, juicy and intricate with aroma and flavor notes of lilac, jasmine, peach, apricot, rosehip and more. JBC has announced that a final release of the coffee will be available in January 2016.

“We selected the top thirty coffees based on quality (represented by overall score), value (reflected by most affordable price per pound), and a ranking of other factors that include distinctiveness and uniqueness of style, certifications such as fair trade or organic, and general rarity,” Coffee Review editor and lead taster Kenneth Davids said in an announcement today.

Panama and Ethiopia were origins reflected by six coffees each on the 2015 list, which is dominated by single-origin offerings, with most coffees traced back to individual farms and/or mills. Other origin countries well represented on the list include Kenya (4), Colombia (2) Nicaragua (2), Costa Rica (2) and Sumatra (2). Nine coffees on the list were submitted by roasters based in California.

Hi..
I’m a beginner Barista here in Malaysia..
I want to learn all about coffee matters..