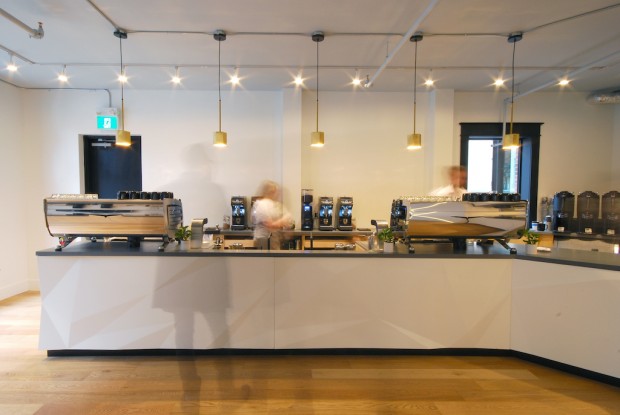 Leave it to the tech sector to go state-of-the-art when staking a café. In Toronto, the consumer and enterprise digital development firm Konrad Group is serving as parent company for Quantum Coffee, a new upscale coffee and espresso bar that opened the doors of its inaugural location at 460 King Street about three weeks ago. So far, patrons and baristas alike have been enjoying the fruits of the first Poursteady machine imported north of the border.

“It’s a really fun thing that I think non-coffee people decided that they could build something that was beautiful and worthwhile. I really think it achieved both those things in that it still lets the customer interact with the machine,” Quantum General Manager Max Waters told Daily Coffee News.

Waters considers the Poursteady to be a step up from the Clover machine, for example, which is one example of an industry predecessor in the field of outstanding high-volume single-cup brewing. “The Clover is just a brick that sits on the counter and makes the customer a beautiful cup of coffee, but there’s no theater, there’s no involvement. You don’t get to see anything happen, whereas the Poursteady allows all those things to happen and still allows the barista to have an interaction, and we can still show people that we’re programming the Poursteady,” said Waters. “We’re standing there watching the pours and fixing them if we don’t like them.” 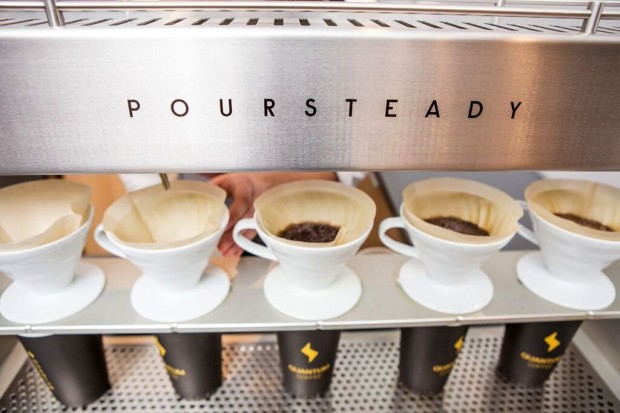 The Poursteady is an automated pour-over machine designed by a small New York-based team of coffee-lovers consisting of a former NASA engineer, a robotics specialist, a product designer and a graphic designer. The earliest prototype debuted in 2013 at the World Maker Faire, and in 2015 the machine won the Best New Product award at the annual SCAA Event in Seattle. Finished production-line machines have only recently started trickling out into the field. Future updates to the machine include Bluetooth integration and other improvements.

Waters said that both the quality and the culture of pour-over in the café environment has improved with the Poursteady. One on hand, it has eliminated the tendency from customers to form preferences or ignite competition between baristas by voicing their opinions of cups from one barista over another, even though the parameters of the machine are still set by humans. Quality-wise, the consistent temperature of water from the machine is an improvement over the inevitably descending temperature of water in a handheld, disconnected kettle.

“Some of my baristas have even said, ‘I’ve been getting nuances out of the cup that I’ve been drinking from the Poursteady that I wasn’t able to pour myself,'” said Waters, citing remarkable stone fruit notes from a recent Rwandan coffee in a Poursteady cup that had previously proven elusive. “That’s kind of interesting to me, that they would actually admit out loud that they think the robot makes better coffee than they do.” 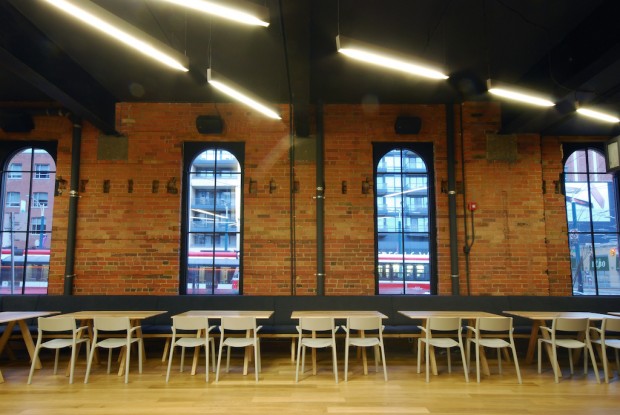 Waters comes to Quantum’s GM post after a series of barista directorial positions around Toronto, including as founding Head Barista at the first two locations of Jimmy’s Coffee. Between those and the current coffee gig, Waters took a break from the bean to work as a fishmonger, managing a seafood shop. There she found correlations in the required attention to detail as well as a demand for manual dexterity. “I’m handy with a portafilter, I’m handy with a knife,” said Waters. “All other things are possible.”

The coffee at Quantum comes from the 40-year-old family-run roastery Classic Gourmet Coffee, based in Vaughn, Ontario, just north of Toronto. “They still believe in the Maillard effect,” said Waters, who appreciates the company’s passion for quality and innovation while also maintaining respect for the finer points of older fashions. While there’s a place for lighter roasts on Quantum’s brew bar, Waters errs on the side of tradition for espresso.

Of light-roasted espresso, Waters said, “To me it’s an experiment on the customer. It’s very fun for a barista to experience these different flavors you can get from your machine. But for a customer, it’s not what they are used to, it’s not what they’re going for.” Waters therefore opts for CGC’s Northern Italian-style blends for the espresso program at Quantum, with which she innovates in other ways. 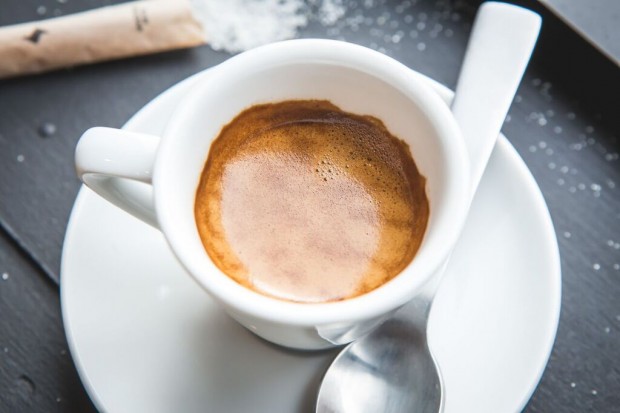 A rotating specialty drink offering appears on the cafe’s menu as the Quantum Planck, named after the German physicist that won the Nobel Prize in 1918. “It’s my only science joke in the whole store,” said Waters, who for the shop’s opening stretch has offered a Crème Brûlée-style coffee drink consisting of a 5.5-ounce single-shot cappuccino with a dab of simple syrup in the cup, then “a mess of sugar on top, and then the torch.” The sugar on top is caramelized via blowtorch into a shell on the surface of the drink, a technique Waters learned through consultation with area pastry chefs. This will eventually be phased out and replaced by a cascara-based drink of some kind, followed by other drinks in an ongoing rotation of specials.

As for future iterations of Quantum Coffee overall, while there are no concrete plans on the table, the idea being bandied about by the Konrad Group is to at least establish an outstanding café wherever they have their own offices. This includes New York City, Chicago, Vancouver, BC, and San Jose, Costa Rica. On even the slightest possibility that she could one day help manage a shop in Costa Rica, Waters said, “Trust me, [it] was very tantalizing when I took the job.” 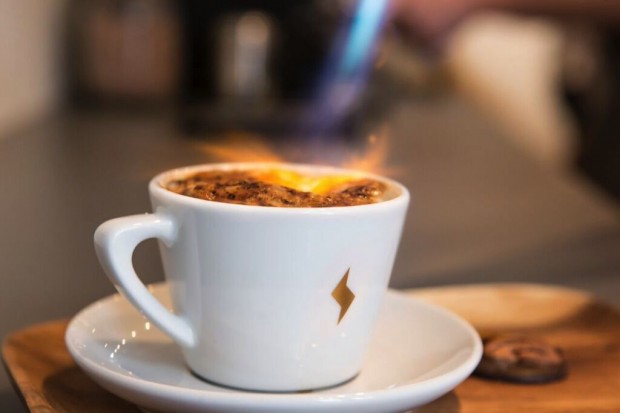 This looks so great! I’ve been several times already, it’s such an awesome spot.

This place is lovely. It’s bright and clean and spacious. The staff are friendly without being overly effusive or putting on that fake customer service grin. The London Fog I had was the best I have ever tasted. I will definitely go again.