Treviso, Italy-based espresso machine manufacturer Sanremo introduced its flashy yet utilitarian, motorcycle-inspired Café Racer machine to the world at the HOST Milan conference this past November, garnering no shortage of oohs and aahs for its striking appearance and impressive technology.

Behind the sculped lines and above the kickstand-like feet of the two or three-group machine are two insulated boilers dedicated to each group, one for brew water, one for circulating pre-heat water through the structure of the group. A single additional boiler handles steam and hot water, and the temperatures of all these boilers are individually settable through an app on the user’s handheld device of choice. Volumetrics and other brew parameters are also controllable through the app.

The first Racer to park on U.S. soil will be inside the new Infusion Coffee + Tea café that opened its doors in Tempe, Ariz. back in April of this year — the first retail outlet of the ICT brand. Originally, Infusion was the tea-selling offshoot of the Espresso Italia coffee wholesale and distribution company, founded decades ago by the inimitable Patrick O’Malley, who, after stepping back from the roasting business for a few years, returned to the flame about five years ago. 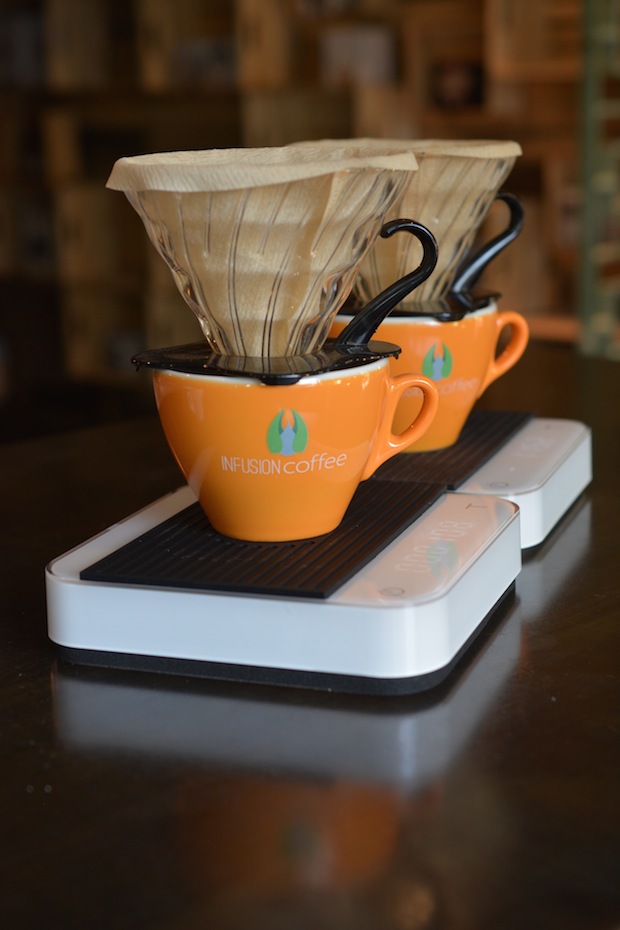 O’Malley’s bean-browning arsenal now includes no fewer than five roasting machines — a 30-kilo, a 15-kilo, a 10.5-kilo, a 1-kilo, and a 250-gram machine, all Ozturk Bay, all modified, the fruits of which are now reaching the public directly through the Tempe café, with the buildout of a larger second shop hoped to begin in Scottsdale by around February 2016.

While the current ICT café is offering no fewer than 14 single-origin coffees, each available brewed half a dozen different ways, O’Malley also continues to import and distribute roasted coffee from Italy for the restaurant wholesale market through the Espresso Italia business. “My ego’s not so big that I need to sell my stuff to everybody,” O’Malley told Daily Coffee News. “I don’t have any problem selling [the imported coffee]. It is what it is, it’s Italian coffee. We re-sell it and I’m proud of it because I love the people that own it. They’re like family.” 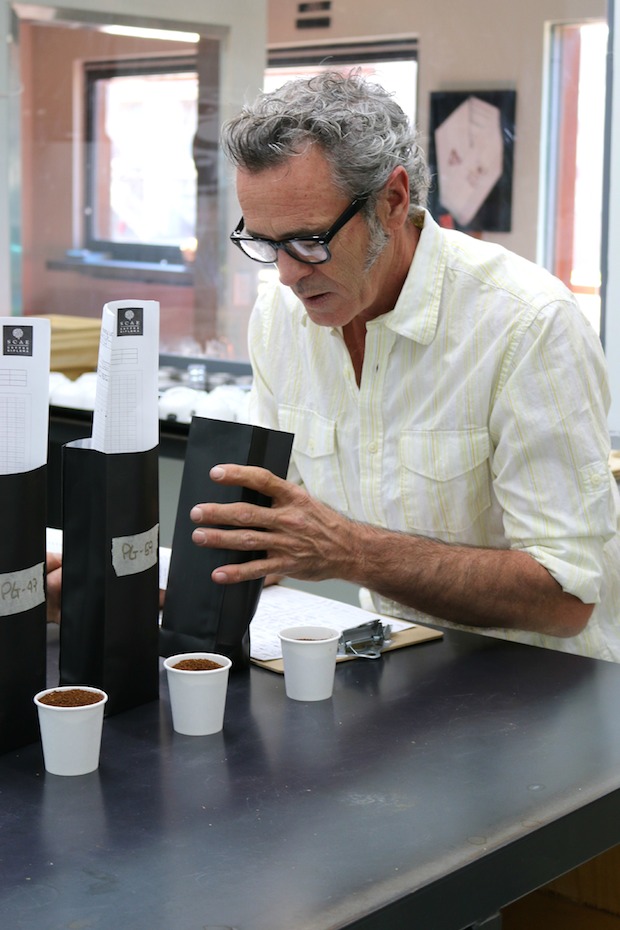 With decades in the industry under his belt, O’Malley’s got a lot of close friends in the coffee world, including in the U.S, Europe, and in various coffeelands. The ICT head roaster is also founder of the International Barista Coffee Academy (IBCA) USA, which is the only coffee training center in the US authorized by the Specialty Coffee Association of Europe to offer SCAE diploma-track courses, which makes sense given that O’Malley himself is only the person in the U.S. ever to have received the coveted diploma.

The ICT retail shop is attached to O’Malley’s IBCA educational facility, which still has a few phases of build-out due to complete. When it’s all said and done, the facility will include a WBC training and competition stage in full view of ICT patrons, where aspiring competitors will be able to hone their skills in front of a coffee-drinking audience in Tempe.

Elsewhere among O’Malley’s list of achievements is the foundation and continued operation of LiquidTech, an espresso machine maintenance company that services scores of different brands and models of commercial coffee gear for shops throughout Arizona and beyond. All things considered, O’Malley was therefore a valuable member of the crack team of industry veterans Sanremo assembled as a sort of extended R&D division in developing their highly-customizable Café Racer machine.

Nicknamed the S.W.A.T. — Sanremo World Academy Team — the team also included 2015 World Champion barista Sasa Sestic, Italian WBC competitor Giacomo Vannelli, Los Angeles-based champion barista Eden-Marie Abramowicz, and several other heavy-hitters from the UK and Australia. It was basically the Avengers of specialty coffee, working shoulder to shoulder to drum up ideas for improvements to Sanremo’s Café Racer and Opera V2 machines, as well as the innovative triple-hopper Revolution grinder, all of which were revealed at HOST Milan in November.

The team convened for three weeks in Treviso in June 2015 to experiment and evaluate Sanremo’s prototype machines, providing feedback at that point that they were able to follow up on with the finalized versions over the weekend surrounding the HOST Milan event. “During the show, we had a chance to play with it, but not like you would in a test setting or a lab setting,” said O’Malley of the Café Racer. “So I can’t wait to get my grubby hands on this thing.” 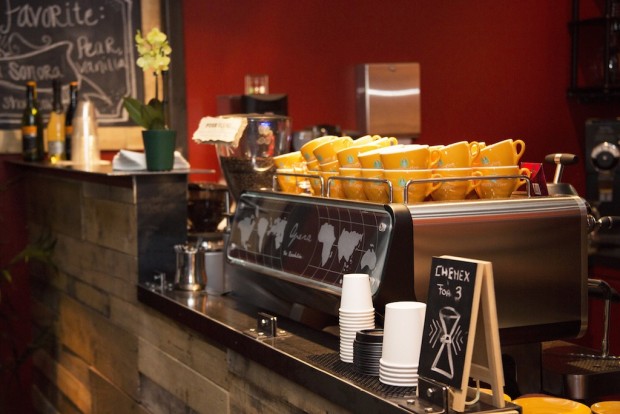 The Sanremo Opera currently atop the Infusion bar. Image courtesy of Infusion Coffee

“The hydraulic stability and the thermal stability of this machine, I don’t think I’ve ever seen anything like it,” said O’Malley, who anticipates putting the sleek and compact Racer on the front bar at the ICT café in Tempe and moving the Opera machine back into lab for training and profiling.

“The Opera has more of a distinct place in the market, in my view,” said O’Malley. “It really belongs in a café that has a roasting facility that really wants to showcase the machine and the different profiles that you can create with it.” O’Malley considers the advanced capabilities of the Opera — and especially the Opera V2, which, among other upgrades, features custom Acaia scales integrated into its drip trays to communicate with the machine’s internal computer via Bluetooth for even greater management of brew water volume and flow — to be a tool for profilers seeking to mine every possibility out of a given coffee. The Café Racer, meanwhile, is built for the Linea PB or Synesso Cyncra market — more of a dependable, accessible, and impeccably stable everyday machine. 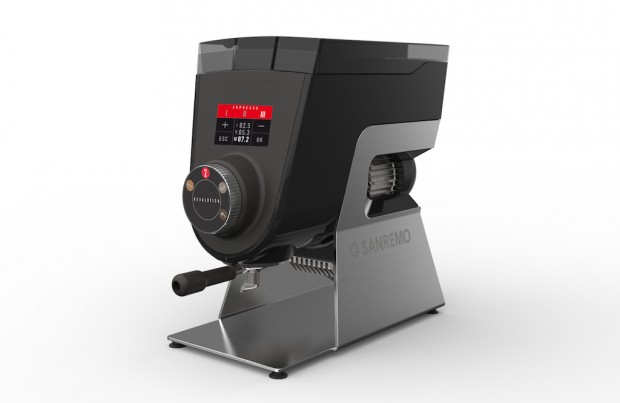 Another head-turning rollout at HOST Milan by Sanremo this past year was the smart, space-saving Revolution grinder, which has three hoppers feeding into a single grinding chamber. The grinder thereby eliminates the need for two additional counter-hogging machines, while also granting baristas the power to concoct custom ground-coffee blends on the fly. The S.W.A.T. provided input on these clever tools this year as well, and so ICT will likely be the first company to have one or several on bars in the US in 2016. O’Malley anticipates putting two Revolutions on the bar in Tempe, and will eventually have them on the bar in Scottsdale as well.

O’Malley hopes to receive his pre-production Café Racer for in-house testing at the IBCA lab early next month. “Sasa’s getting one, [2013 UKBC Champion] John Gordon’s getting one, and then myself,” said O’Malley. “They have a couple of them in cafés in Italy right now, running the same tests.”

The tests Sanremo has developed require several skilled coffee pros to work in tandem to perform, involving complex and rigorous demands on the machine while recording its performance — tests a bit too involved for performance on the bar while also serving customers. “Our protocol that we set for the testing is pretty stringent. It takes a team effort to do,” said O’Malley. But once those results are fed back to the manufacturer and the requisite certifications are cleared, Infusion Coffee+Tea’s Café Racer will be revved up and ready for some laps around the menu for the public by mid-year. 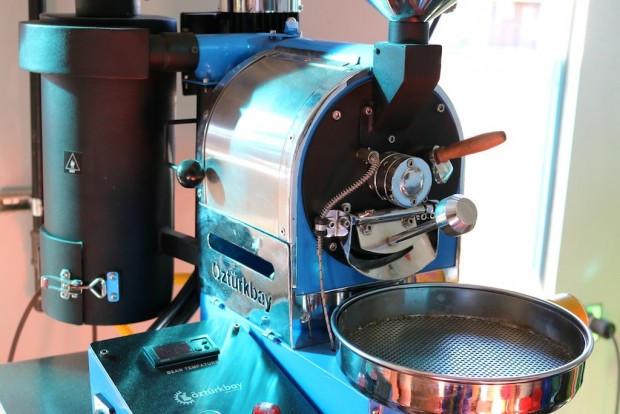