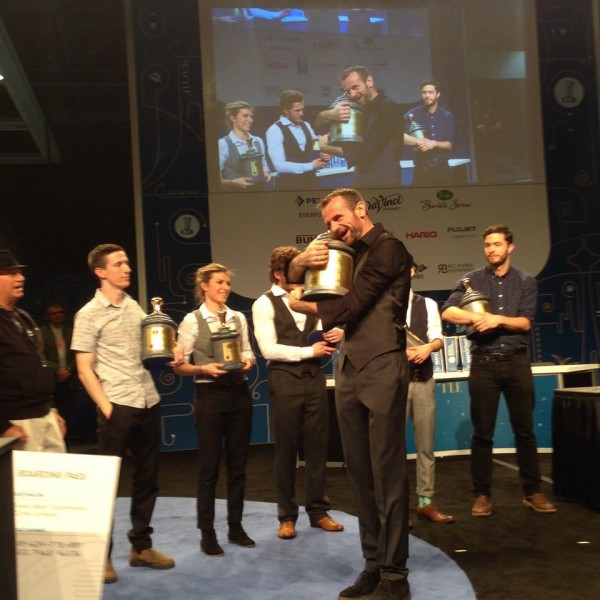 Sasa Sestic hugging his trophy moments after hugging Izaki and moments before hugging many others (SCAA photo).

The incredible routines throughout the final day of the 2015 WBC, presented by Dublin-based World Coffee Events, were fitting punctuations to what has been the largest WBC to date. Over the three-day event, 49 baristas competed from the 57 countries that now have sanctioned national competitions.

Sestic takes over for Hidenori Izaki of Japan as the reigning world champion, a title that has had positive and lasting impacts on the careers of Sestic’s other predecessors since the inaugural WBC in 2000. Sestic becomes the second Australian world champion, following Paul Bassett of Bassett Espresso, who won in Boston in 2003.

This year’s 2015 WBC is also the swan song for the competition cappuccino course, which is being replaced at next year’s WBC in Dublin by a more broadly defined milk-based drink.

Despite the ferocity of competition — intensely expressed following long hours of preparation — this year’s WBC also did well in maintaining a spirit of collaboration, which was perhaps most evident on the final day through competitors’ post-routine public discussions with past world champions James Hoffmann (2007), Stephen Morrissey (2008), Pete Licata (20013) and Hidenori Izaki (20014). Imagine the four of them huddled around espresso shots inside a vacuum sealer brought to the competition stage by Put, who during the day’s final routine said the process reduces the amount of carbonic acid and associated bitterness.

This is the cutting edge of preparation and flavor, and we congratulate Mr. Sestic and all this year’s competitors for its continued sharpening.