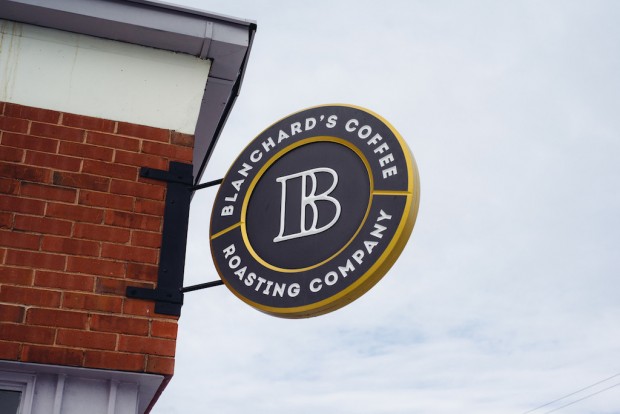 Currently in its 10th anniversary year, Blanchard’s Coffee Roasting Co. celebrated with a fresh re-branding and is continuing the party by way of a major expansion.

In November 2015, the company relocated its operation into a new, larger production and QC space at 1903 A Westwood Avenue in Richmond, Va., barely skipping a beat from the old location to the new. Time off production was of course not an option in order to keep up with the schedule that’s gotten the company where it is today, therefore it was within the space of one weekend that their old 30-kilo-capacity Toper was relocated and their shiny new Loring S35 Kestrel started turning its first beans brown in the company’s new “Roast Lab.”

Phase two of the expansion project is now also nearly complete, with the establishment of a new training facility and public classroom. The 1,000-square-foot education center consists of two different café-caliber coffee service setups, one of which centers on a Modbar installation, the other a more traditional La Marzocco station. The equipment represents two different ideals, featuring the manufacturers with whom Blanchard’s has a relationship: Modbar, La Marzocco, Mahlkonig, and the batch brewing triumvirate of Bunn, Fetco and Curtis. 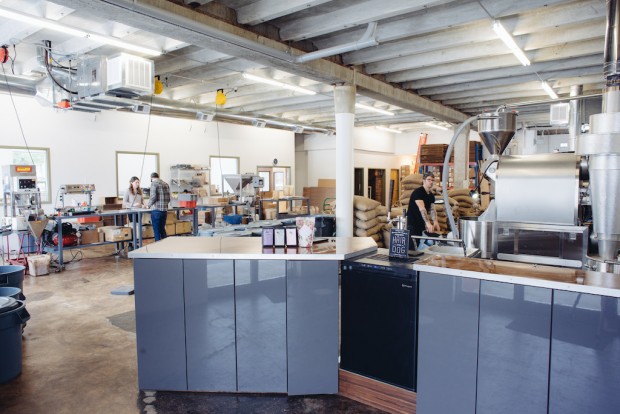 “We have two coffee shops’ worth of equipment side by side that we’re building out, so that we have a lab-like training facility for our clients and for public events,” Blanchard’s Coffee Roasting Director of Sales and Marketing Stephen T. Robertson told Daily Coffee News.

Naturally such a resource now also includes some de rigueur cold-brew equipment. “We’re doing some cool cold-brew stuff in partnership with Confluence,” said Robertson. “Right between our two coffee shop set-ups is a 12-keg tap system, so we’ll have that stuff up there, too.”

Training events in the lab will be primarily for wholesale clientele, ranging from general overviews to more specific SCAA-oriented classes. Additionally, public brewing workshops are also in the works, in an effort to ensure that consumers are getting the best from the Blanchard’s beans they buy in stores. “We have no idea what people are doing with our coffee once they get it,” said Robertson. “There’s a good chance that some really good coffee is getting ruined at home, because in general, the average coffee consumer probably doesn’t know what exactly to do.” 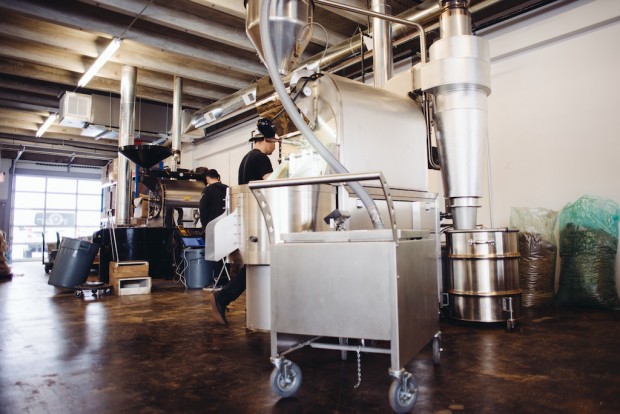 Blanchard’s hopes to change that by providing some guidance and instruction to any consumers willing to learn, which is also in an effort to do justice to the coffees the company so carefully sources and roasts. These include several offerings the company imports personally and directly from farmers without any assistance from intermediaries.

These exclusive coffees are sometimes allocated for collaborations with special events or clients. One example is the Finca San Jose De Las Nubes from Nicaragua that goes into the Quirk Coffee, a co-branded special for the design-forward Quirk Hotel. 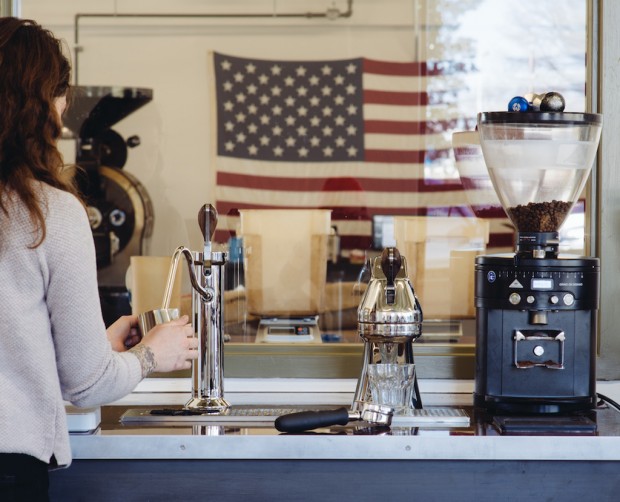 As it happens, Blanchard’s Director of Operations and Lead Roaster Seth Bauserman just got back from a jaunt to Nicaragua. “We went to be with our good friend and partner Bayardo Reyes at his farm Finca San Jose in Matagalpa,” Bauserman told Daily Coffee News. “Harvest is in full swing and we are very excited about how it is cupping. Bayardo is a special guy and what he and his brother are doing on his farm is very exciting on all levels, and we are very proud to be a part of it.” 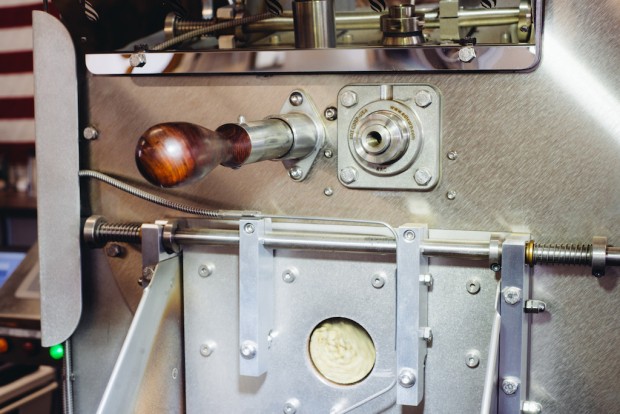 With production capacity now more than doubled, it’s safe to say that Blanchard’s can proceed full steam ahead without much concern over the next expansion. “We’d love to have the same problem that we did when we moved three years ago, and say that we didn’t plan well enough in advance,” said Robertson of the good fortune inherent to a company’s growing pains. “But at the same time, the nice thing about what we’ve done is that for the first time as a small business, we’ve actually planned way ahead of what our needs were.”

“We’re being proactive instead of reactionary,” added Robertson, noting that the Westwood Avenue building has an adjoining section of another several thousand square feet that’s not currently included in their lease. “We have the first right of refusal on that,” said Robertson, projecting that when Blanchard’s runs out of storage space in their new facility as it currently stands — which Robertson thinks is likely to happen fairly soon — they’ll be able to rent the rest of the building and then spread out production even more. 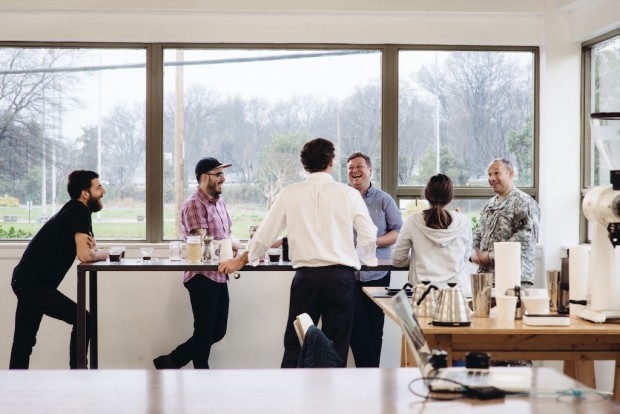 “It is the culmination of many years of hard work manifested in one space, and that is something that makes us feel very proud,” added Bauserman. “Being a small business you are always holding things together with tape, sweat, and enthusiasm, hoping to just keep moving forward. But now that we have become a little bit more established and found some breathing room we were able to do what we have always wanted.”

Blanchard’s new Roast Lab training and education center is expected to be complete by mid February. 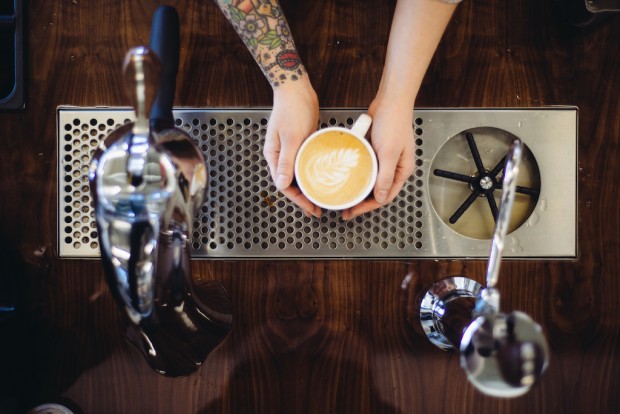