On a World Tour with Classic Rock Coffee 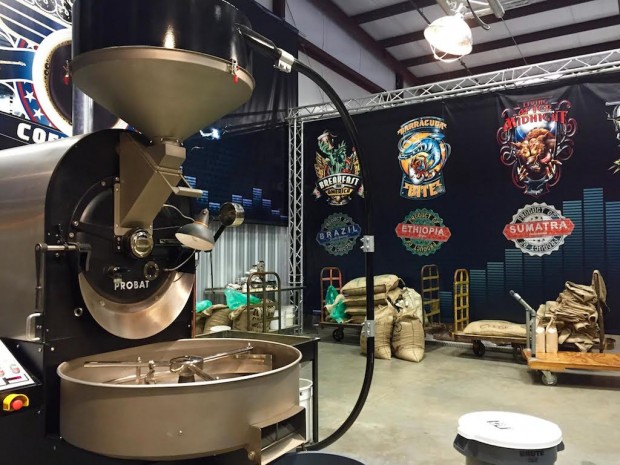 At the Classic Rock Coffee Co. headquarters in Springfield, Mo. All photos courtesy of CRC.

There was a point in the summer of 2015 during which the method of “sonication-assisted extraction” made echoes throughout the coffee sphere. The first product of this process to hit shelves was the Elixir cold brew, which purported to use sound waves generated by music as a kind of molecular-level agitation during the brewing process. It all seemed very mysterious and left plenty of questions unanswered, although one question we never even got around to asking was what effect sound waves might have during the roasting process, well before brewing. And what if the beans were not simply sonicated, but rocked?

“We always used to joke about that,” Classic Rock Coffee President and Founder Kent Morrison told Daily Coffee News. “We had a big PA system sitting by our roaster, and were like ‘hey, there’s music in our beans now.'” In the case of this steadily expanding, five-year-old Springfield, Mo.-based chain, one effect this has had is evidently a rapid global franchising success.

When the Missouri coffee company first opened its brand to franchising, they expected the first shops to be in places like Kansas City or St. Louis. “But what happened is our first one was in Pakistan,” said Morrison. “We then sold India. Then came Midland and Odessa, Texas, and then came UAE.” Other countries with CRC stores up and running or soon to open include Bangladesh, Egypt, Morocco, Lebanon, Nigeria, Hungary, Kuwait and more.

“The truth is, we weren’t advertising trying to gain these international ones, but apparently a lot of them look at American franchises to find out new concepts that they’re interested in bringing into their countries,” said Morrison. “The music, or the music theme anyway, is what brought most of them to us. It wasn’t the coffee, because obviously they hadn’t been over here to try it.”

Their international buyers do eventually come to the states to sample the coffee though, as well as to experience the atmosphere before signing on. In the 20,000-square-foot Missouri headquarters that houses the flagship cafe attached to their U.S. roasting plant, the atmosphere includes walls adorned with framed concert ticket stubs, tour posters, vinyl record jackets, actual guitars and truss-mounted stage-style lighting. 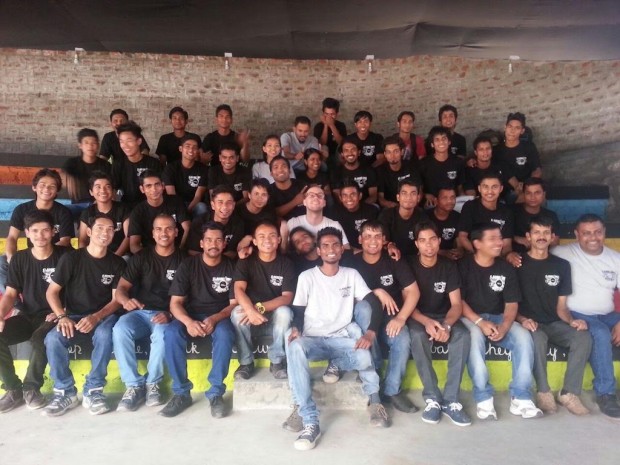 The menu includes smoothies, shakes, snacks, all of which extends to other franchise locations. A ton of merchandise — grinders, brewing gear, filters and accessories, and branded items like T-shirts and mugs — is also for sale. Though the company doesn’t recommend the plan to franchisees due to the cost of so much extra square footage, the Springfield location includes an actual stage for live in-house rock shows.

Meanwhile, underneath the high kicks, windmill strumming and blacklight artwork, the coffee is by no means an afterthought. In fact, CRC goes to significant lengths to ensure that the specialty coffees at every CRC location are fresh, high-quality and well-prepared. This means they don’t simply shake hands and say goodbye to their franchisees, nor do they roast and ship coffee to them from the U.S.

According to Morrison, the most economical way of doing that would be by boat, which is not only still too expensive but also way too slow, leaving coffees far from fresh by the time they reach their distant cafés. Instead, they dispatch roastery overseers and franchisee trainers Chris McGuire and Mason Jones to every far corner of the earth to establish production roasting facilities and to train franchisees in the arts of roasting and preparing excellent coffee.

“In Dhaka, Bangladesh, for instance, we have a little Probat P5 over there. We actually trained them on roasting and we use Cropster so we can check in on their profiles on a weekly basis,” Jones told Daily Coffee News. “Same in Nigeria, same with the UAE.”

Jones explained that every franchisee is equipped with a Probat P5 and then supplied with green coffees from CRC’s line-up of their signature single-origins. All of the roasting for U.S. stores is done in Springfield on a Probat P-25. Most of their green coffees are sourced through Café Imports. 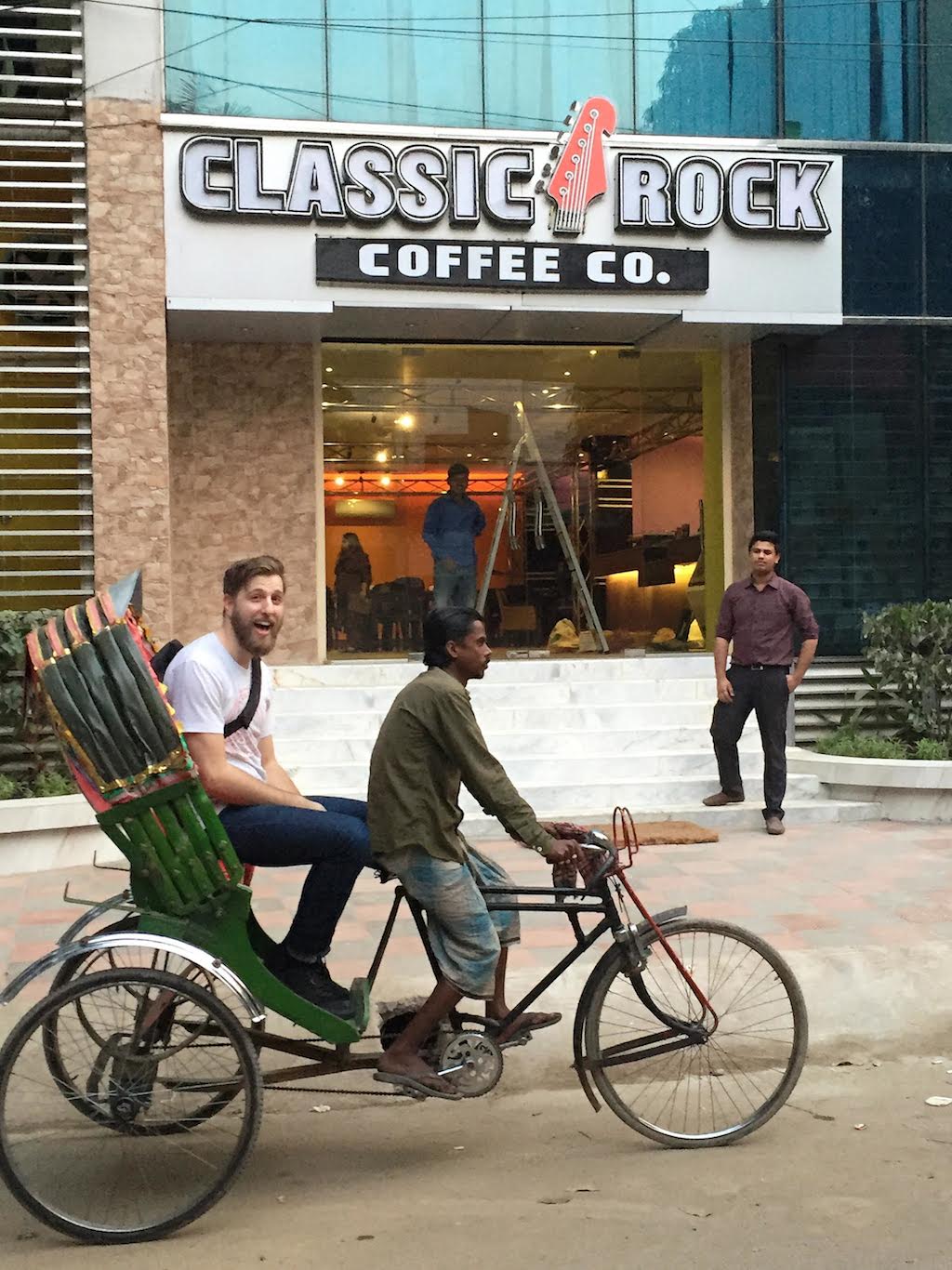 The plan has worked for all locations so far, except for India. “Importing coffee into India is a no-go. You can’t do it. So for that location specifically, they send us probably 10-15 different samples green, so we could sample-roast them,” said Jones. “In India they use all Indian coffees, but we have QC’ed all the coffee that they use.”

Apart from ensuring a fresh-roasted product, setting up roasteries at every new site is a matter of providing franchisees with the opportunity to grow. “They bought the rights to their whole country, so at some point, they’re going to be roasting and supplying for six, seven or either different stores, not just their one single store,” said Morrison.

Brewing gear at CRC locations include Mahlkonig grinders, Fetco batch brewers and La Marzocco espresso machines, typically either a Strada or a volumetric GB5, for preparing coffees naturally wrapped in rock-oriented names. The Back in Black coffee is always a single-origin bean from Guatemala, while Breakfast in America is always a light-roasted Brazil. Their menu of flavored espresso-based drinks is also decked in rock references, such as the Cinnamon Girl honey-cinnamon latte, and the Crazy On You caramel latte.

The company even runs what amounts to an online radio station, a web-based music feed called The Double Shot for streaming to any of its locations around the world, and goes so far as to include an occasional pause for station identification: “You’re listening to the Double Shot, streaming live from the Classic Rock Coffee mothership in Springfield, Missouri.” For copyright reasons, none of their items is named specifically after any bands, and all of the necessary fees and licenses are paid and acquired for use of the music, so it’s all good, clean, above-board fun.

As for whether the sound waves from a face-melting Jimmy Page guitar solo or Keith Moon cymbal crash actually affects the roast, there haven’t been any scientific studies done as yet. “We think music is making our coffee taste better,” said Morrison in jest, adding, “It’s making our environment better here, definitely.”