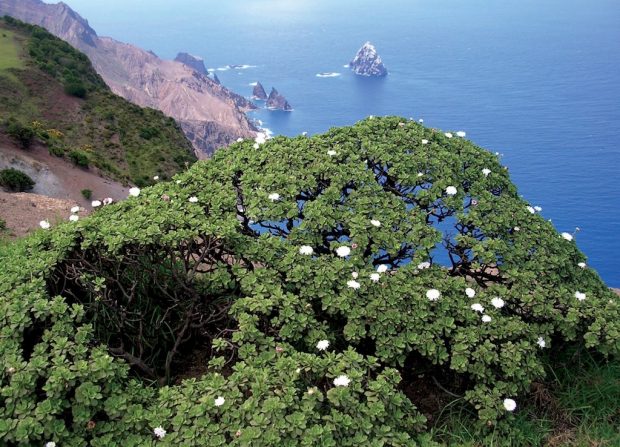 A view of St. Helena courtesy of sthelenaisland.info

Best known by outsiders as the remote tropical island where Napoleon was exiled by the British before his death six years later, St. Helena is also one of the coffee world’s most mysterious and sought-after coffee origins.

Though few records of the history of St. Helena coffee production exist within public view, the volcanic island’s coffee history has been by all accounts sporadic, with quality and quantity seeing sometimes drastic differences from one year to the next.

Starbucks today announced it is releasing 204 8.8-ounce bags — at $80 per bag — online beginning Sept. 1, while its Reserve-brand stores at Peachtree in Atlanta, Harvard Yard  in Boston, Williamsburg in New York and Oak & Rush in Chicago will also have limited quantities available for brewing. Twenty five pounds of the coffee sold out in four days at the Starbucks Reserve Roastery and Tasting Room in Seattle, where the coffee was roasted.

In total, Starbucks has roasted 220 pounds of St. Helena coffee, representing a third of the island’s total output for the crop year, Starbucks said.

Situated between Rio de Janeiro, Brazil, and Southwest Africa, the 47-square-mile volcanic island can be reached only by a days-long voyage from Angola, where the nearest commercial airport exists.

The coffee found on the island is widely considered to be a “green-tipped” bourbon variety that originated in Ethiopia and made its way to St. Helena in the early 1700s through the British-owned trader East India Company by way of the Port of Mocha in Yemen. 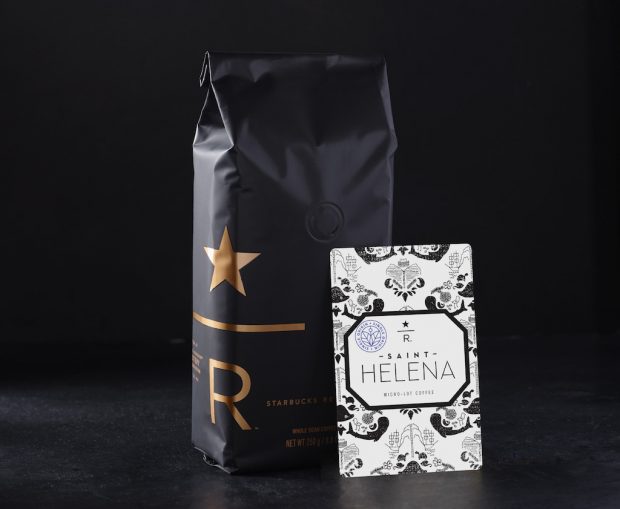 Coffee flourished as a primary export in St. Helena in the 1990s under the stewardship of Englishman David Henry. According to the St. Helena tourism site sthelenaisland.info, approximately 18 acres were occupied by coffee cultivation in the heyday of the late 1990s, with approximately 20,000 trees and a potential to produce 12 tons of green coffee per year, about a quarter of which was destined for export.

By the mid-2000s the industry there had floundered, and today only a few acres on the lush island are devoted to coffee farming.

“We are thrilled to be able to share this very special coffee,” Starbucks coffee specialist Leslie Wolford said of the St. Helena offering, which was sourced by Starbucks green buyer Ann Traumann. “It is a delicate cup with subtle floral aromas leading to soft citrus fruit and caramel notes. This is just one example of how our scale and longstanding relationships with farmers allows us to bring the most incredible coffees to our customers.”

St. Helene Coffee really is something and it’s good to know that Starbucks is bringing it for the general public to experience. However, like everything Starbucks does, this really is very very expensive. I understand it’s rate and maybe people buying St.helena coffee might support the local farmers, the selling price should have been more affordable. Just my little take!

It looks like the peak of St Helena is 818m, while the farmable land is likely below 700m. How does this coffee score? Is it really something special, or just rare? Is elevation not as important as we are lead to believe? Are there any special climate considerations to the island?

I believe because it’s a cool but tropical, mild, and mountainous island in the path of the trade winds far from continental influences, each meter of altitude is “worth more” than a meter of altitude of a mainland coffee plantation. It’s not the number that dictates why high altitude coffee is good, but the climatic conditions. St. Helena has extremely favorable climatic conditions even at relatively low altitudes. I mean, at 700 meters high on St. Helena, you’re just a few miles from the sea. In some parts of the world, 700 meters high could be thousands of miles from the moderating influences of the ocean.