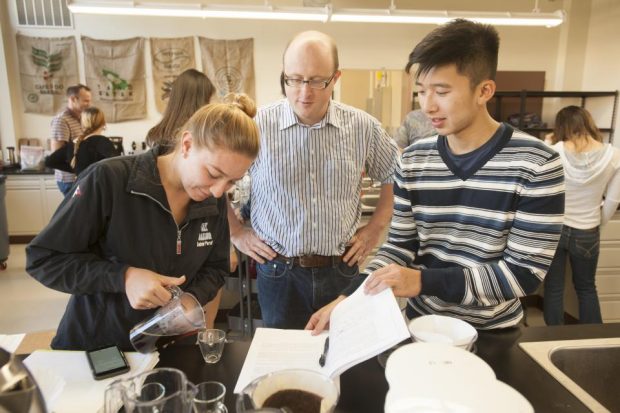 Associate professor William Ristenpart talks with Sabrina Perell, community regional development major, and Kyle Phan, an undeclared major, about the taste of their brew during a UC Davis “Design of Coffee” class in 2015. UC Davis photo by Gregory Urquiaga.

The University of California, Davis, has announced that a $250,000 gift from Peet’s Coffee will go toward a brick-and-mortar establishment for its academic Coffee Center, which will include the Peet’s Pilot Roastery.

“The pioneering center and pilot roastery will be devoted to post-harvest coffee research and engineering, an underrepresented field, and aims to be the leader in coffee science,” UC Davis announced today.

After professors at UC Davis first introduced science curriculum based around coffee in 2012, the university launched a full-fledged Coffee Center within its Foods for Health Institute in 2014, later unveiling a coffee laboratory.

With the new roastery and coffee center, the University announced it plans to expand on programming and education related to many aspects of coffee, from coffee genetics and sustainability, to chemical composition and sensory analysis.

“UC Davis already has tremendous expertise in a variety of disciplines that pertain to coffee, and now the Peet’s Coffee Pilot Roastery will provide a physical infrastructure to help focus that expertise on cutting-edge coffee science and education,” said Bill Ristenpart, a UC Davis chemical engineering professor who along with professor Tonya Kuhl first designed the “Design of Coffee” course in 2012.

Ristenpart and Kuhl will co-direct the UC Davis Coffee Center along with colleague Jean-Xavier Guinard.

This appears to be a bellwether moment for coffee as a subject of academic pursuit. Just last week, the Texas A&M University Board of Regents voted in approval of The Center for Coffee Research and Education, which will include collaboration with the nonprofit World Coffee Research.