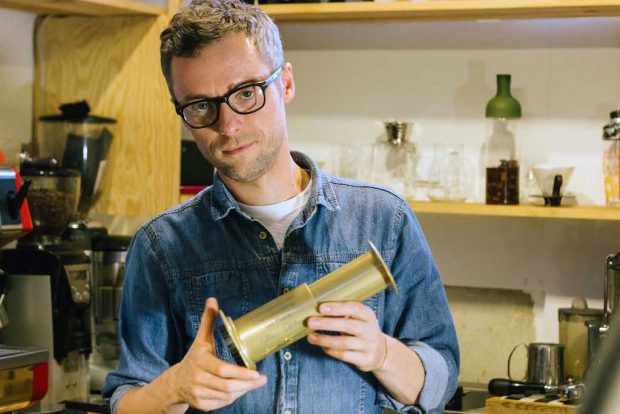 We can’t all be a reigning world Aeropress champion, though through the wonders of the information age, any of us can take a crack at brewing like the champ, either at home or in the café.

This year the top honor was earned by Filip Kucharczyk, founder of Poland’s Cafe Targowa and co-founder of the roastery Czarny Deszcz, and the team at European Coffee Trip has agreed to share their step-by-step video in which Kucharczyk demonstrates his winning recipe.

Sure, it closely resembles the thousands of other inverted Aeropress recipes throughout the coffeesphere — there’s water, an Aeropress, coffee, a grinder, time and the manual actions of agitating and pressing — but this one’s the big winner, and sometimes, for the sporting crowd, that’s important.

For more specifics on the recipe, check out the European Coffee Trip interview with Kucharczyk. In the meantime, you can brew along with the champ:

All well and good but this method would double the cost of my morning caffeine habit. I use the more standard ratio of 18 grams coffee per 300 grams water brewed for the same length of time but with water 60 seconds off the boil and coffee ground slightly finer than filter/pour-over. It’s a very satisfying brew but I’m guessing maybe not quite as smooth as this winning recipe? I may give it a try but I’d be looking at an extra 35 dollars a month if I adopted it and my income doesn’t match my expensive taste in single estate coffee as it is! 🙁

I’m not sure the 35 grams of coffee is correct. That would twice what I use for some very good tasting coffee.