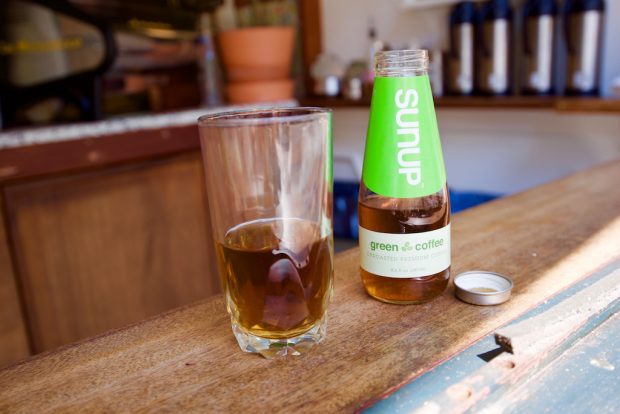 Is another new day is dawning for cold RTD coffee? Be it flash-chilled, pressure-brewed, slow-dripped or nitro-infused, nearly every imaginable method of preparing roasted coffee for delivery in bottles or cans at this point has been tested. But what about unroasted coffee?

The product, made from a blend of “premium” green coffees, is touted by the company for its refreshing flavor, low acidity and intact, natural antioxidants. Sunup states that the brew is made strong enough for the 9.5-ounce bottle to provide an equivalent caffeine dose as a “large” iced coffee, and is committed to sourcing only certified organic ingredients.

Sunup inventor and company founder Nate Pealer started experimenting with brewing unroasted coffee at home five years ago. “Initially I was really curious about why we all roast coffee in the first place, and wanted to know why we couldn’t brew the beans raw,” Pealer told Daily Coffee News. He quickly found that it was not exactly easy to get the best from the super-dense greens.

“Think of it like trying to get flavor out of wonderful little pebbles,” said Pealer of the process. Brewing of Sunup is therefore more of an extended process with significantly hotter water than standard brewing, though he’s keeping his proprietary details under wraps. “I am very proud of our process and have worked very hard to develop it. My lips are sealed.”

With no formal coffee training or experience beyond a longstanding love of coffee and many books read  on the subject, Pealer began the adventure using beans purchased from Sweet Maria’s and has since shifted to Royal Coffee New York as the business has scaled up. While SM and Royal both specialize in selling specialty grade coffee, Sunup branding uses the term “premium.” 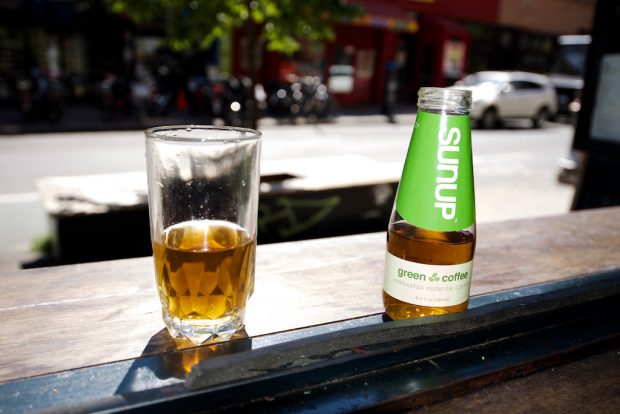 Part the reticence to adopt specialty lingo is due to the simple fact that he’s not roasting coffee, while so many of the standards and methods of the specialty coffee world are based on qualities found in roasted coffee. At the same time, as an industry outsider to this point, the verbiage wasn’t something terribly ingrained in his approach anyway. “Choosing the word ‘premium’ over ‘specialty’ was not a calculated move,” said Pealer. “I’m planning new packaging for 2017 so I will reconsider again what works best for Sunup.”

A similar matter of perspective informs such descriptions as the beverage’s “farm fresh” taste, while the regions in which those farms are located remain unidentified despite how differences in origin might have some bearing on the coffee’s flavor.

“The taste is more like a tea because we don’t roast the beans, so ‘farm fresh’ is just meant to help describe our coffee as tasting ‘from nature’ as opposed to ‘from roaster,'” explained Pealer, adding that they haven’t yet determined whether the origin-related differences in the flavor of roasted coffee correlate to similar differences in brewed green coffee. “We work with green coffee exclusively, so haven’t studied any congruencies. We know what we like in our green coffee, though.”

Future iterations of label design might address the mildly ironic opacity of the origins of the coffee in the otherwise see-through drink. Given the specialty coffee movement’s ever-advancing spirit of transparency and support for farmers, Pealer agreed it would be nice to provide more information about the blend that’s currently made up of mostly Central American and African coffees. As he’s still tinkering with recipe, however, it was impractical to do so initially.

The issue will grow simpler in the future as the Sunup product line evolves. “We hope to grow our company to the point where we can offer single-origin green coffees,” said Pealer, noting that the realities of batch sizes and bulk ordering for packaging materials makes it impractical at so early a stage to diversify beyond the initial blended offering.

Sunup started making deliveries in May of this year. Looking ahead, Pealer said that there’s been interest from cafes in using Sunup for unique coffee-based drinks, although for the most part they’ll remain focused on the bottle RTD market.

“We have many exciting things planned for 2017, including an unsweetened Sunup,” said Pealer. “Organic, unroasted coffee is a micro niche in the coffee business, and we are a tiny company of only four people, but we love what we are doing and are very excited to share our passion for and the benefits of green coffee with more people.”

I enjoyed reading the article about the green coffee brewing. The green coffee always been our one of tradition daily cup in part of middle east. We normally spice it up with cardamom and cloves with a hint of cinnamon. We prefer to drink it twice a day in morning and evening especially with dates on side.