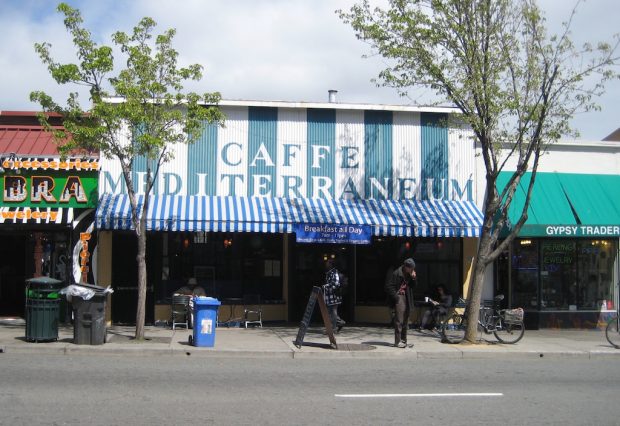 In the coffee retail landscape of the United States today, dominated by gigantic, public-traded chains and their smaller, rapidly proliferating venture-capital-backed competitors, it’s become increasingly rare to find independent cafés that have been able to stay in business for a matter of decades. Even rarer is the café that has provided a setting for some truly inspired moments in American cultural history.

Caffe Mediterraneum — better known as Caffe Med or The Med — has been by all accounts one of these gem-like cafés. First set up inside a bookstore on Telegraph Avenue near the University of California, Berkeley, in 1956, The Med is a perfect representation and East Bay progenitor of the American café counterculture that first took off with the Beat generation in late 1950s and into the 1960s. Inside, creative and political energies toward social progressivism and activism throughout the decades have been fueled by Italian-American-inspired espresso drinks that have lived on to today.

So it’s not surprising that several generations of patrons from throughout the café’s history flocked back to The Med one final time last week to say goodbye to the shop and its current owner Craig Becker, who according to a Berkeleyside report is handing over the keys to new owners on Jan. 1 for a major renovation and likely an end to the Med legacy.

One important piece of that legacy is the latte, that combination of a simple shot or two of espresso with more frothed milk than had ever been imagined in the cafés of the rest of the world. The latte, of course, is now a ubiquitous menu item in American cafés of all kinds, where it’s commonly filled with syrups and other flavorings for concoctions that might have seemed utterly ridiculous in 1956. (I’m looking right at you, S’mores and Pumpkin Spice.)

I first read the name Caffe Mediterraneum in Kenneth Davids’ seminal book, “Coffee: A Guide to Buying, Brewing and Enjoying.” In it, Davids tells of his encounter with Med Co-Owner Leno Menoirin who once told him that he invented the caffe latte in 1959 in response to customers complaining about the small size of the macchiatos or cappuccinos they were being served. Today, Caffe Med itself has the origin story on its website:

While Seattle may have made this drink famous, it was invented here at the Caffe Mediterraneum in the late 1950’s. Lino Meiorin, one of the owners, was the first Italian-trained barista in the Bay Area. Customers were not used to the strong flavor of a traditional Italian cappuccino and would ask Lino for more milk.  Speaking in Italian, he would tell the barista to put more latte (milk) in their cup. Finally he thought of putting a larger drink on the menu with  the same amount of espresso but more steamed milk, and calling it a caffe latte.  At first it was served in a bowl but soon they switched to a pint beer glass. Today lattes are often served in a wide mouth cup in order to show off hearts, rosettas and other latte art designs.

Apart from its coffee history, Caffe Med was a frequent destination for poet Allen Ginsberg, who is rumored to have written parts of “Howl” in the café. And you film buffs may recall a scene from “The Graduate” in which Dustin Hoffman’s character Benjamin Braddock is sitting in the window seat at Caffe Med and spots Katherine Ross’ character Elaine Robinson walking down Telegraph Avenue before he chases after her on a city bus.

Here’s the Med in film: