Arabica Genome Sequenced in Pursuit of Quality and Adaptation 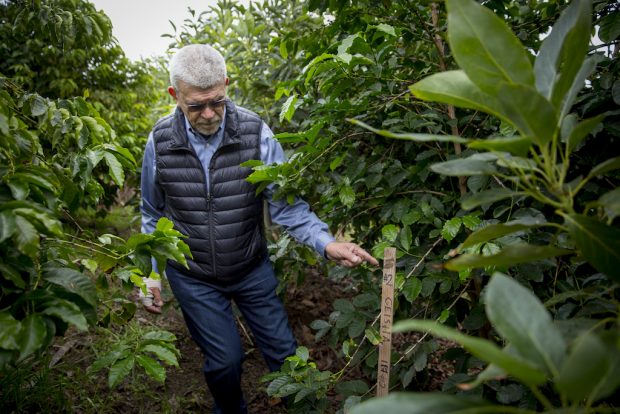 UC Davis researcher Juan Medrano points to the marker that indicates the tree used to sequence the arabica genome, at Good Land Organics in Goleta, Calif.

The University of California, Davis, has released the first public genome sequence of Coffea arabica, a step researchers believe could provide the foundation for new high-quality, adaptable coffee varieties.

“This new genome sequence for Coffea arabica contains information crucial for developing high-quality, disease-resistant coffee varieties that can adapt to the climate changes that are expected to threaten global coffee production in the next 30 years,” said UC Davis College of Agricultural and Environmental Sciences geneticist Juan Medrano. “We hope that the C. arabica sequence will eventually benefit everyone involved with coffee — from coffee farmers, whose livelihoods are threatened by devastating diseases like coffee leaf rust, to coffee processors and consumers around the world.” 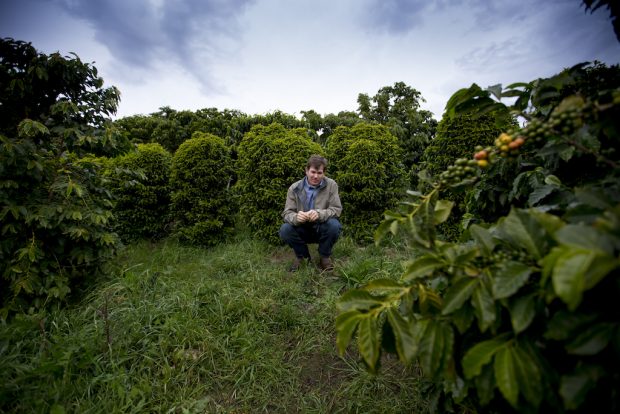 For the project, researchers collaborated with Jay Ruskey of the Good Land Organics farm near Santa Barbara in California’s Central Coast region. For several years, Ruskey has been growing arabica coffee in California with the belief that coffee can become a viable agricultural product for the state.

Researchers collected 23 samples of Geisha coffee trees at different developmental stages from Ruskey’s coffee farm, coming to estimate after the sequencing that the UCG-17 Geisha has a genome composed of 1.19 million base pairs, which is approximately one-third of that of the human genome.

They have also sequenced samples from 22 other Geisha trees to better understand genetic variation within the variety, as well as within 13 other arabica varieties. Unfortunately, in first-of-its-kind research published last year, World Coffee Research found relatively little genetic diversity among 947 arabica samples.

“Going forward, the researchers will focus on identifying genes and molecular pathways associated with coffee quality, in hopes that these will provide a better understanding of the flavor profiles of Geisha coffee,” UC Davis said in an announcement of the arabica sequencing, which followed the first ever genome sequencing of coffee, of C. canephora (robusta) in 2014. 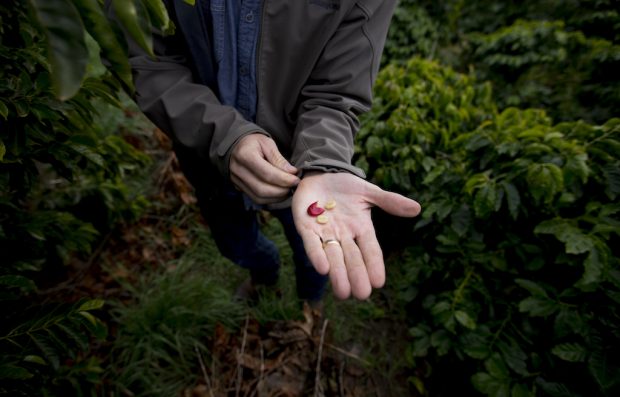 Ruskey squeezes out a coffee bean at Good Land Organics.

Funding for the UC Davis genome sequencing project was provided by Japan’s Suntory group, one of the oldest beverage companies in Japan, which produces a range of alcoholic and non-alcoholic beverages under various brands.

“We anticipate that functional analysis of the genes identified by the C. arabica sequencing will lead to development of new, disease-resistant coffee varieties with enhanced flavor and aroma characteristics,” Yoshikazu Tanaka, senior general manager for Suntory Global Innovation Center Limited, said in the UC Davis Announcement. “The Suntory Group will continue its research and development efforts to identify formulas and raw materials for creating coffee beverages that have higher added value, with a focus on safety, security and good taste.”

The new genome sequence has been posted to Phytozome.net, the public database for comparative plant genomics.

Oh yay! GMO- coffee!! The best thing about this news, for people like me, is that it gives me hope that traditional farmers will earn more money from their non-gmo heirloom coffees in the future. So cheers to that!

And also, every argument, including climate change, used to propagate the claims for needing GMO plant varieties is pure fictional fear mongering. The only real driver behind the GMO industry is the corporate profits of said industry. Thankfully, everyone is slowly waking up to this truth.

Agreed. Soon we will see GMO Round-up Ready(TM) coffee growing like corn in Iowa. Will that be good for smallholder farmers around the world? Will that be good for our heath or the industry? Who benefits here really? I can see engineered varieties coming where plants die at a specific year and their beans cannot produce seedlings.

We are coffee growers and factory located in the New Guinean Islands Regions of papua New Guinea. We are interesting to grow UCG-17 Geisha.
Can you help us on this matter？

Awaiting for your reply.

Thanks and kind regards,
Eugene