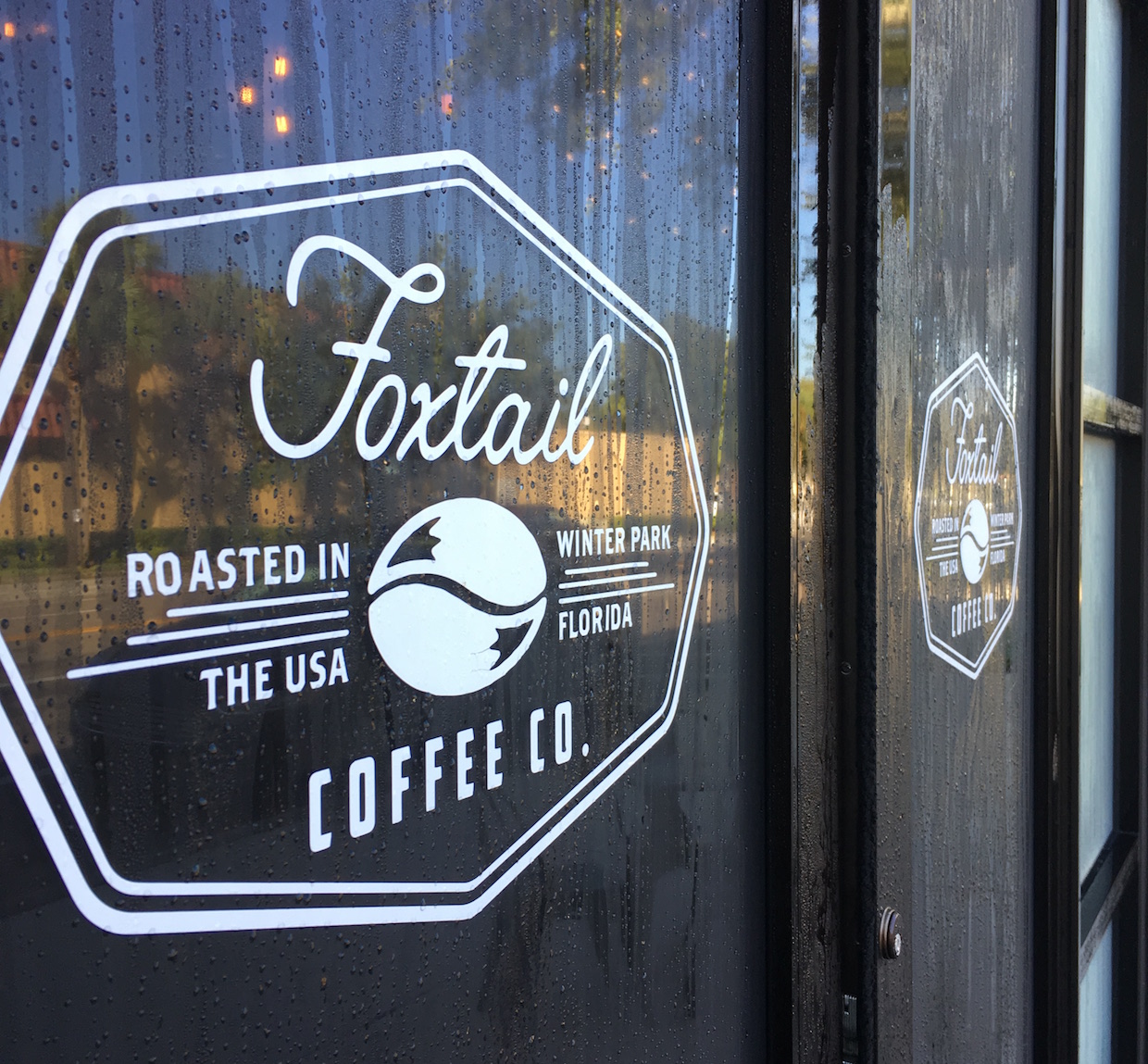 Foxtail has opened inside the DoveCote brasserie space in downtown Orlando. Foxtail plans for two more bars in the coming months. All images courtesy of Foxtail Coffee Co.

While foxes spend most of their time in isolation, the Foxtail Coffee Co., flagship roastery cafe in Winter Park, Fla., is no longer alone, with the opening of a second bar in downtown Orlando late last month. The company, which introduced itself to patrons in Winter Park a mere eight months ago, has two additional retail concepts in the works.

The newly opened shop is in downtown Orlando, where a coffee counter associated with upscale brasserie DoveCote was converted into a full-service Foxtail espresso bar. 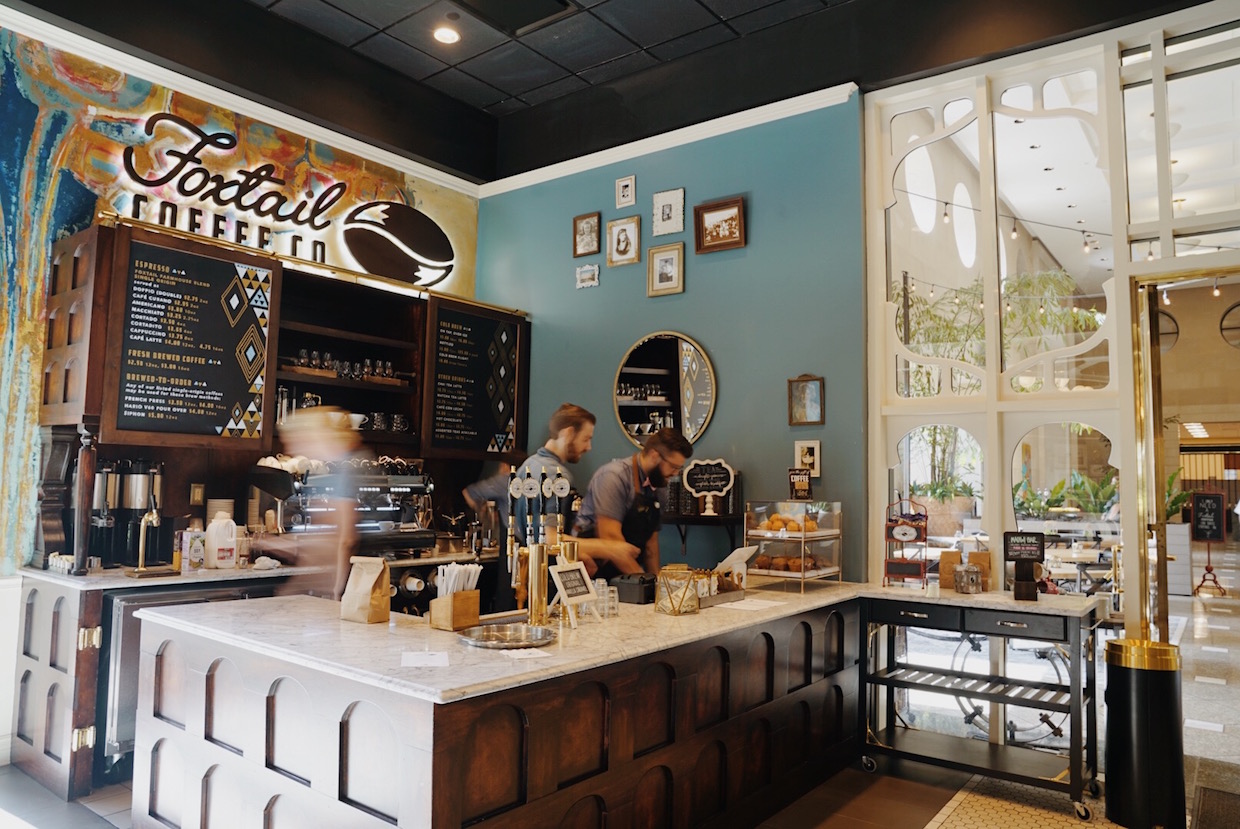 Accessible to the public either through the lobby of the Bank of America Building at 390 N. Orange Ave. or through the restaurant, the DoveCote Foxtail now offers its full range of single-origins and blends prepared as espresso drinks on a 3-group Nuova Simonelli Aurelia machine paired with Mazzer Kony and Mini grinders, as well as V60 pourovers, Fetco XTS batch and siphon brews.

Patrons can order coffee drinks and pastries either over the counter or from a table inside the brasserie, receiving full restaurant table service even if only ordering coffee and sitting with a laptop or having a meeting, as the area’s corporate clientele is wont to do. 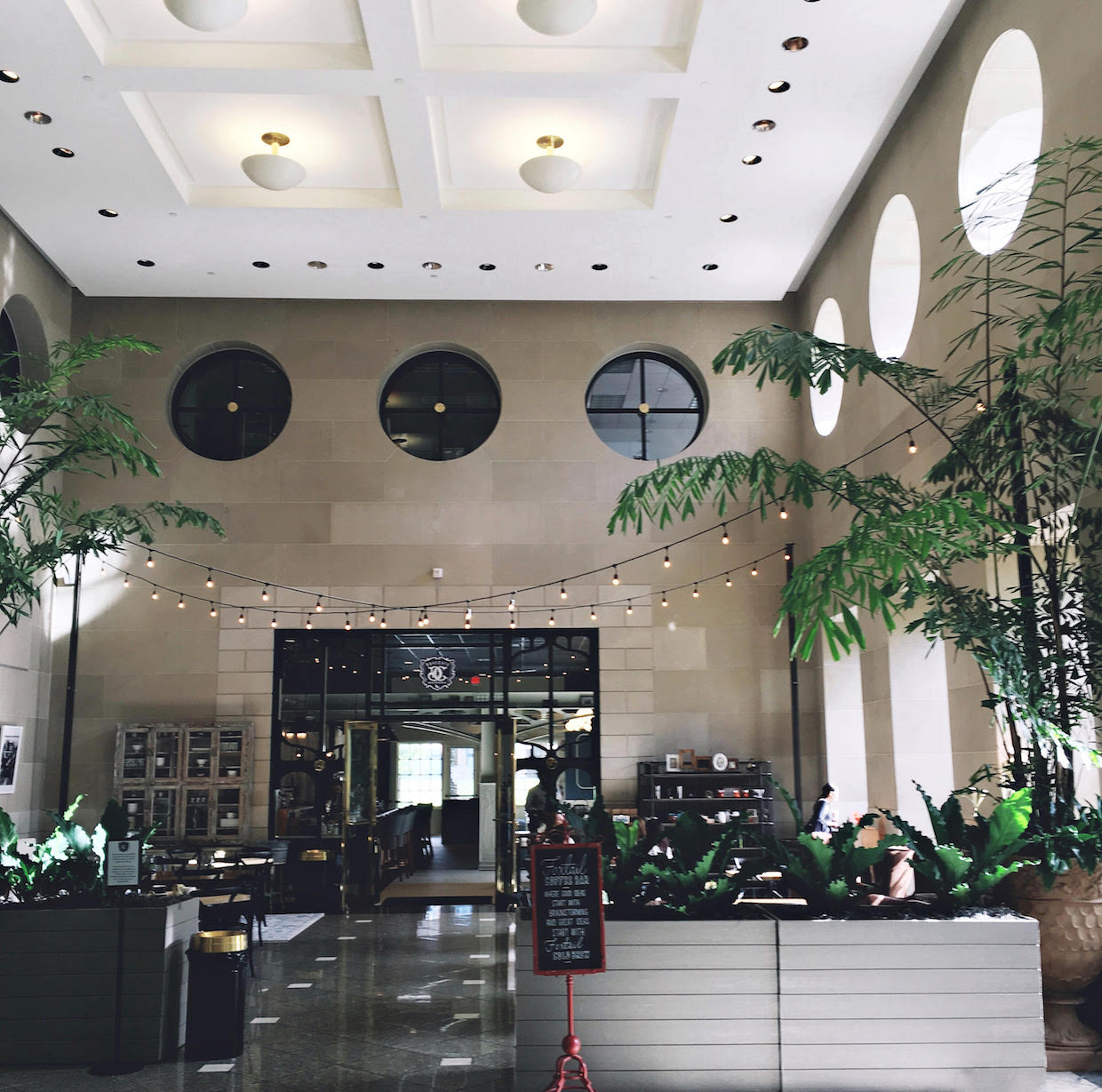 The lobby of the new Foxtail bar.

Foxtail’s third location in slated to open in October in the forthcoming Hourglass District. There Foxtail will be join a bakery, a tamale cook, and other small businesses, and will offer walk-up service through a window that opens onto an old automotive service station whose gas pumps will be operated by an auto service tenant when the market opens.

Not long after that opening, Foxtail expects to reopen their flagship following an expansion that will involve taking over the space next door for an additional service bar that constitutes the company’s fourth retail location. “We’ll have a little more space there to do a few more things so it’s not all so grab-and-go,” Foxtail Coffee Co. Co-Founder Iain Yeakle told Daily Coffee News. 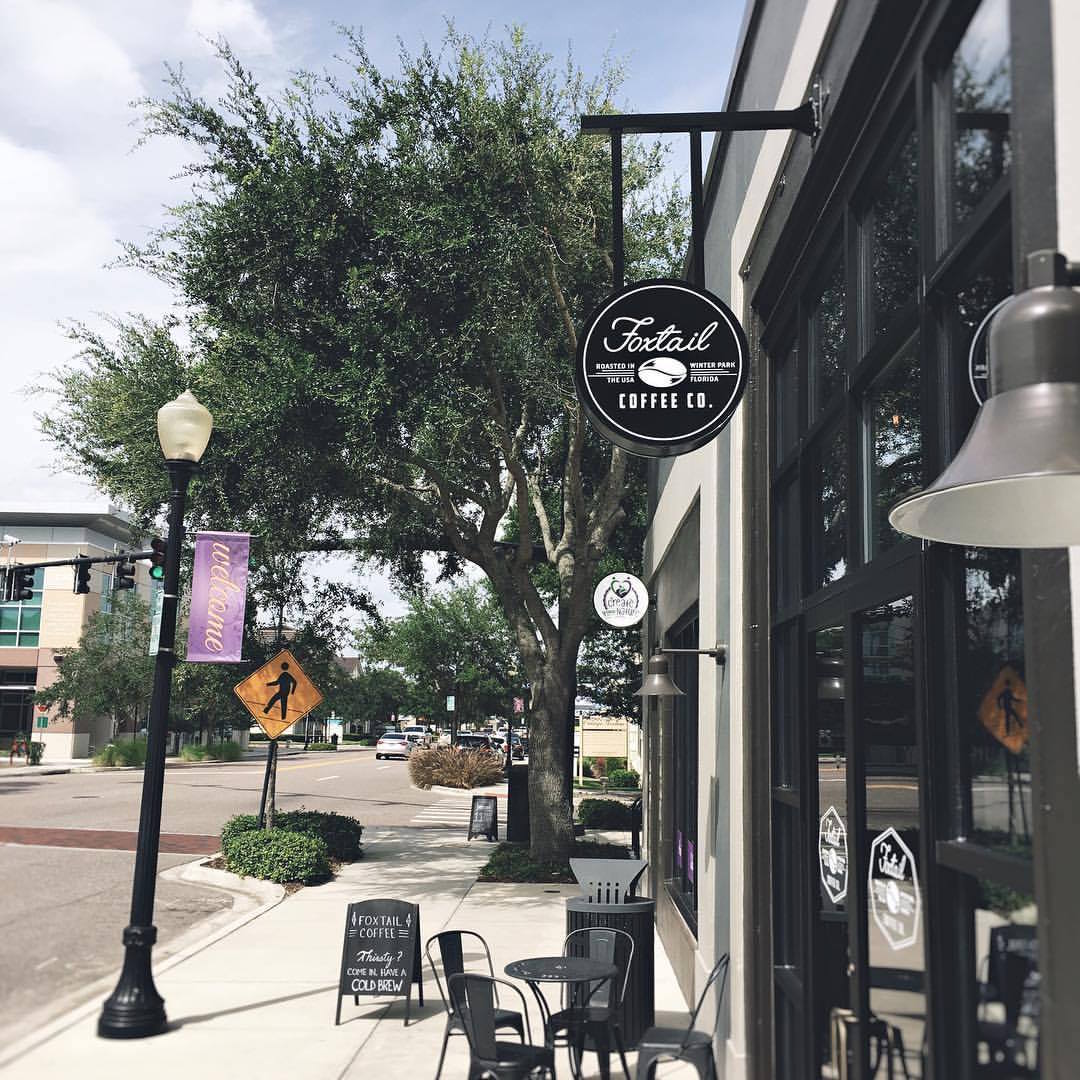 The expansion, which they’re calling Foxtail’s Farmhouse, will add another 1,400 square feet and feature another 3-group La Marzocco machine alongside a menu of local beer, spirits and wine, plus light bites such as charcuterie and few other small plates.

Coffee for all locations and wholesale accounts are sourced through import partners that include Café Imports, Olam, Royal Coffee New York and occasionally through relationships with the farmers directly. 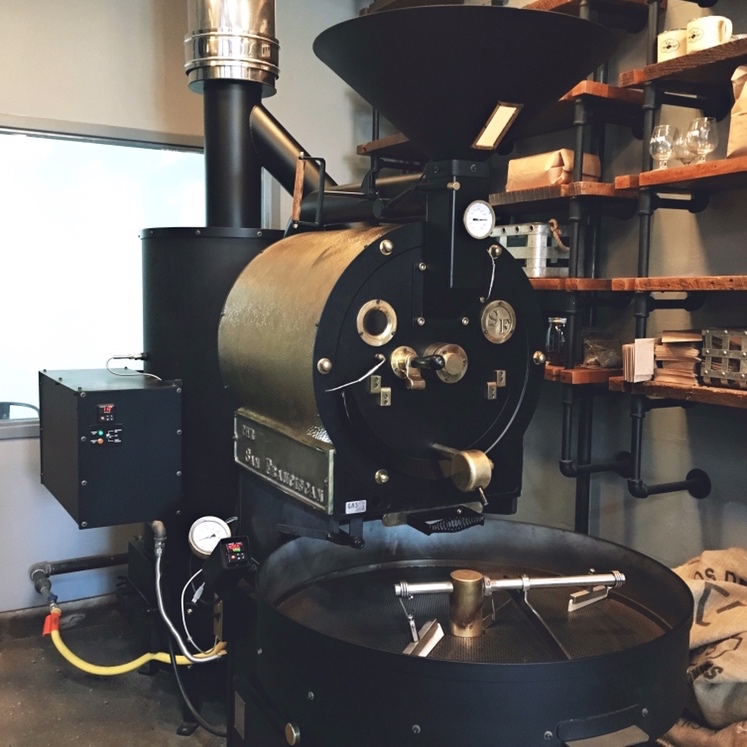 “We like to be as socially responsible and environmentally responsible as possible. There’s really no future in agriculture besides sustainable agriculture,” said Yeakle, who is passionate about sustainability both with respects both to present-day quality and for future supply, as well as for farmers’ safety today and their families’ safety tomorrow.

“I’m not crazy about certain pesticides that then leak into the aquifers and come up in a spring which then a whole town is now drinking. I mean, these are long-term effects that aren’t really monitored in a lot of these countries,” said Yeakle. “I understand that it’s not an immediate thing that happens, but if we do long-term studies on these types of things, I believe that we will find that sustainable agriculture and limiting our use of pesticides and keeping the rainforest intact are all very important things for growing coffee continuously.”

With equally intent deliberation, Yeakle explores each bean he sources by sampling roasts pulled in ten-second increments to determine where exactly each shines brightest, a point that differs from bean to bean, lot to lot. 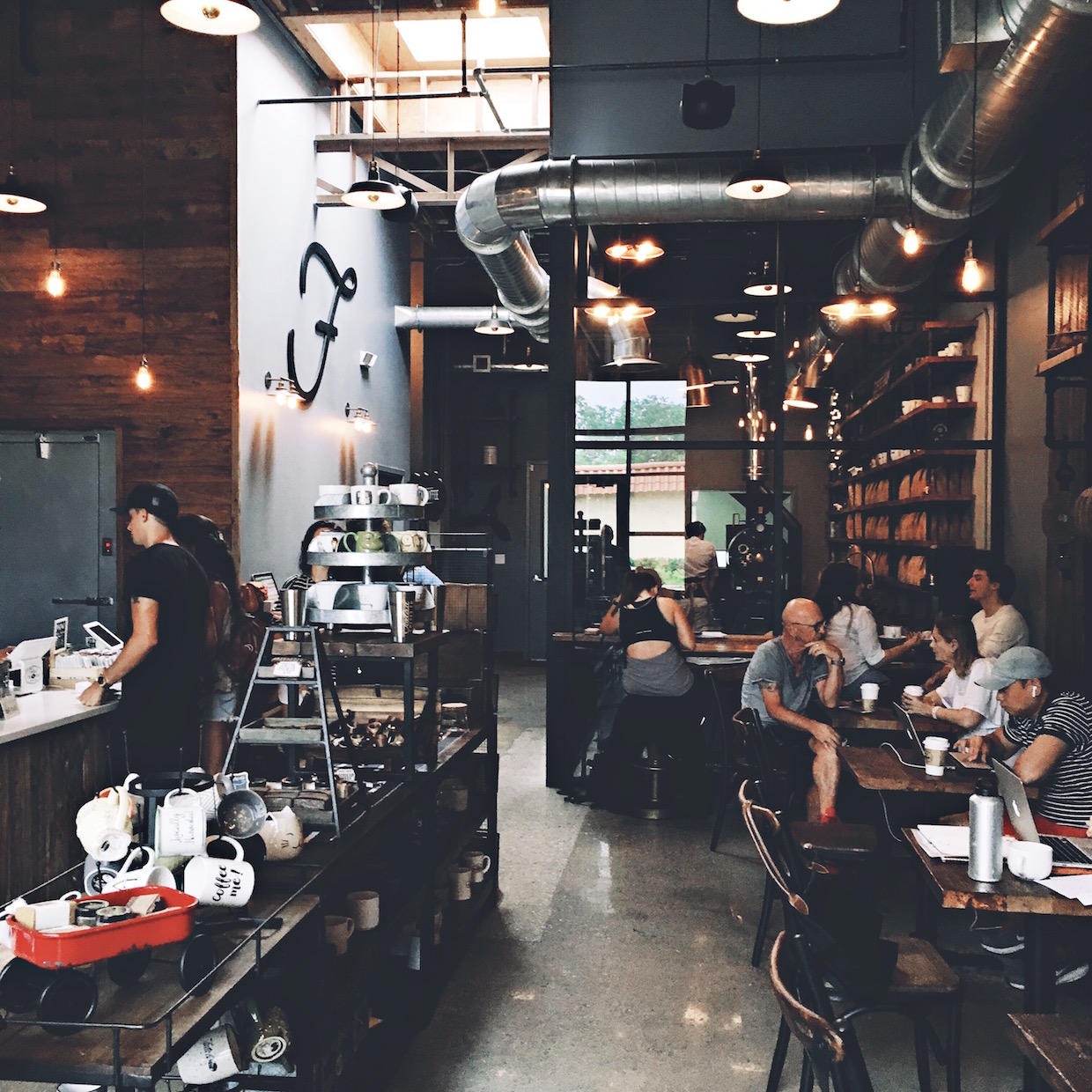 In the midst of all the current retail growth, Foxtail is also growing its wholesale business, although retail is decidedly the company’s foremost concern at the moment.

“We’re having a lot of fun creating spaces for the community,” Yeakle said. “A lot of people go to our shops to study and to meet, and those are things that you don’t get out of wholesale.”