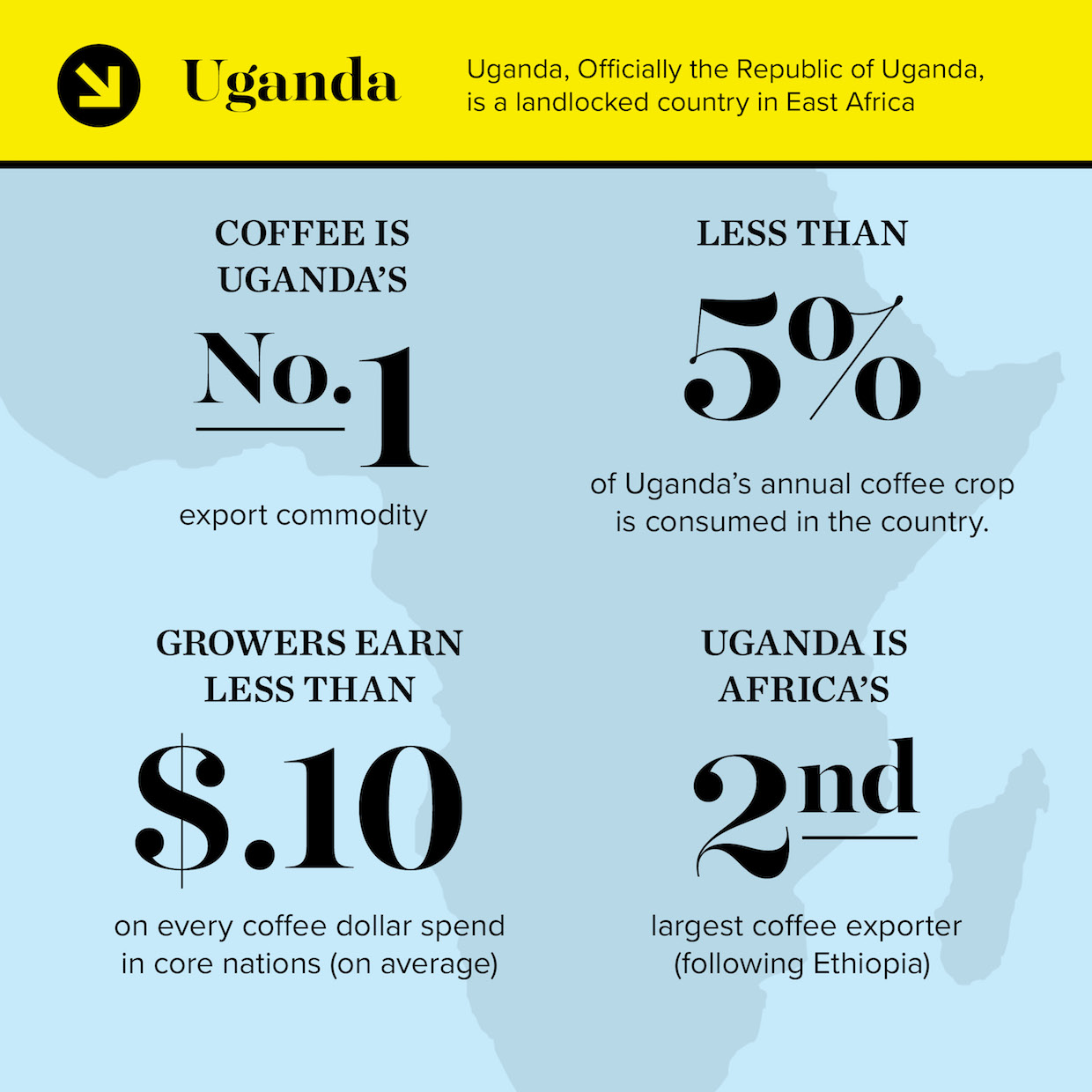 For her research, Lehigh Associate Professor of Sociology Kelly Austin spent 11 months observing and conducting interviews in a coffee-growing community in eastern Uganda’s Mbale district on the slopes of Mount Elgon, where high elevation and other natural conditions provide particularly fertile ground for arabica growth. Interviewees were between the ages of 30 and 76, and all had been involved in coffee farming for years, many since childhood.

Austin’s full report, titled “Brewing Unequal Exchanges in Coffee” and published in the Journal of World-Systems Research, notes a number of additional issues that have hampered sustainable coffee production throughout many parts of the coffee-growing world. Here are a few of the report’s highlights:

Austin observed the widespread practice of felling large native trees to make way for additional coffee plants. Interviewees perceived that trees not only diminished growing area, but were competitors of coffee plants for key nutrients — perceptions that have been generally been proven untrue by agronomists working in the coffee sector.

An additional problem within this particular region, as noted by Austin, is soil degradation and the potential for landslides.

“Landslides represent a key environmental threat in the region, and the connections to increased deforestation on the steep hillsides are clear,” Austin wrote in the report. “For example, when entering the Bududa District, there is a large sign or billboard warning of the dangers of felling trees in creating conditions that lead to landslides. Despite this, high levels of population growth and the desire to earn money pressure farmers to expand cultivation sites into unclaimed, forested areas. In fact, a landslide that claimed five lives just occurred in Bududa in 2016 during the time of the second wave of interviews.”

Austin observed a remarkably high incidence of coffee growers who had contracted malaria, particularly among growers in shade-covered, damper areas suited for the cultivation of coffee seedlings.

“Every respondent said they had acquired malaria, often multiple times, during the last coffee harvest season,” Austin wrote. “Though direct causation cannot be made, it is common knowledge in the community that the mosquitoes endemic to this region prefer ‘bushy,’ wet areas that are characteristic of coffee gardens and that the harvesting of coffee requires much more time spent outside in the garden, while other local crops (e.g. bananas, cabbage) do not share these qualities.”

Lower Rates of Education Among Children

Throughout the world, coffee production is known to often involve children, primarily as pickers on family farms. Austin noted that even if families have access to a school, the average household income of around $100 per year in rural areas necessitates all family hands be used in harvest season.

“When it is harvesting time, attendance goes down,” a coffee grower who is also the headmaster at a local school told Austin.

Another coffee grower said during an interview, “There are many parents who use their kids to grow and harvest. Some parents tell their children not to go to school to help pick the coffee. Some kids who do not go to school [at all] sneak into the coffee gardens and steal the coffee. Then they use the money for gambling.”

Austin said every one of the women she interviewed said that women principally grow, harvest and carry coffee, yet only men are involved of the selling. She characterized this as a stark inequality that only compounds the inequalities inherent in the global coffee trade.

“It must be emphasized that in the end, the average male coffee grower in Bududa will only make less than two and a half cents on every cup of coffee sold in Northern markets. This is a gross injustice,” Austin wrote. “The average female coffee grower in Bududa will make nothing. If she’s lucky, she might escape the coffee season with only aches and pains, and no permanent scars. By bringing gender into the discussion of unequal exchange, the hidden, unpaid labor of women becomes manifest in the systematic devaluation of primary sector and other labor-intensive products that women are disproportionately responsible for generating.”

Viewing all of this through the lens of unequal exchange theory — which, if we may oversimplify for the purposes of this report, aims to shine a light on systemic exploitation in trade between developed countries and developing countries — Austin concludes that, on a macro scale, “The coffee industry should be brought under regulation.”

“The coffee growers in Bududa are grossly underpaid for their coffee, and trading in green coffee will never accrue the profits gained in the global North from transporting, roasting, marketing, distributing, and selling the coffee in upscale coffee houses,” Austin wrote. “As coffee production happens to produce an ideal habitat for mosquitoes, reduces school participation among children, exacerbates the lower status of women, and, in some cases, leads to enhanced deforestation and erosion, there seems little possibility that the long-term negative well-being consequences might ever outpace any economic gains of cultivating coffee.”

The full report — which includes much more insight into how coffee is traded at the local level — can be found here.

No kidding. It is sinful that anybody in the coffee industry isn’t aware of these issues. That’s why fair trade, organics and traceability are so important. It is also why hiding our ignorance behind meaningless slogans is not.