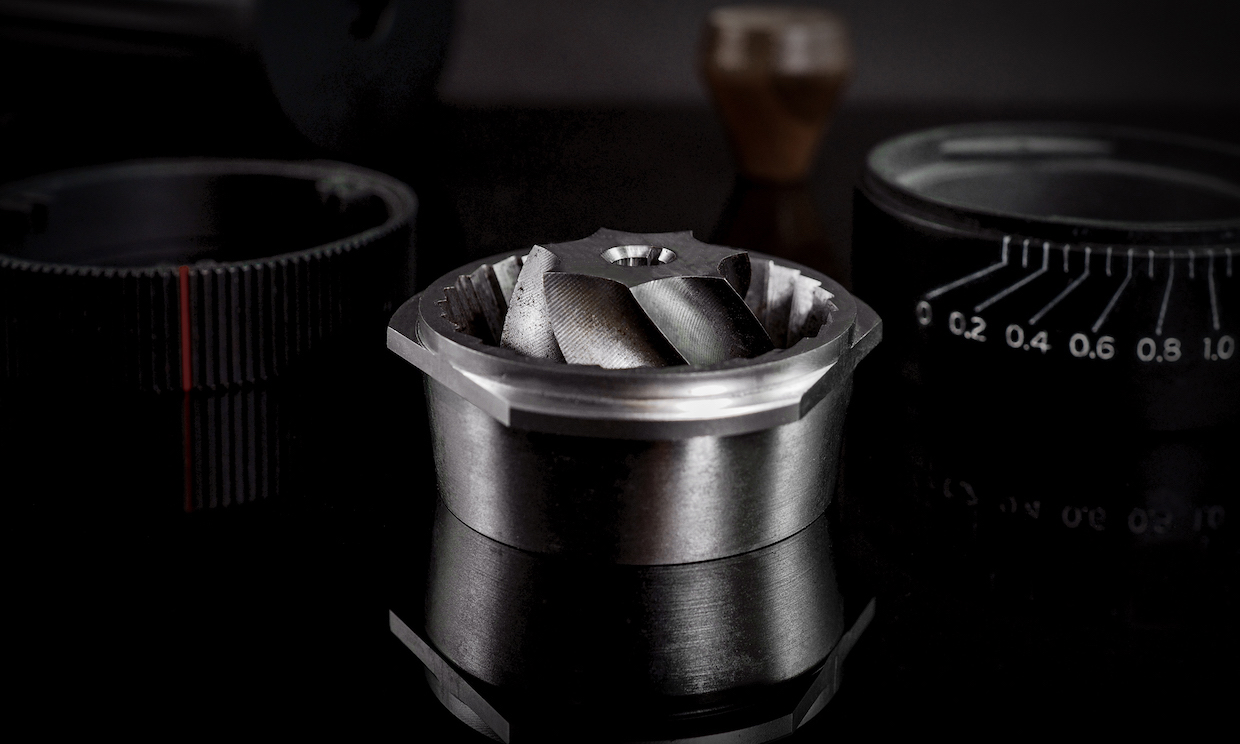 As 2017 draws to a close, two players in the handheld grinder space are looking forward to a bright new year: Kinu Grinders is establishing its U.S. base of operations in Florida while readying a new product line; and the new Canadian company Kansu Coffee is releasing its first product, the Hiku Grinder.

The Hiku features its own patent-pending conical burr and adjustment system within a sleek black anodized aluminum body with walnut knob. The machined aluminum body is textured for grip and features etched setting indicator marks for stepless adjustments. 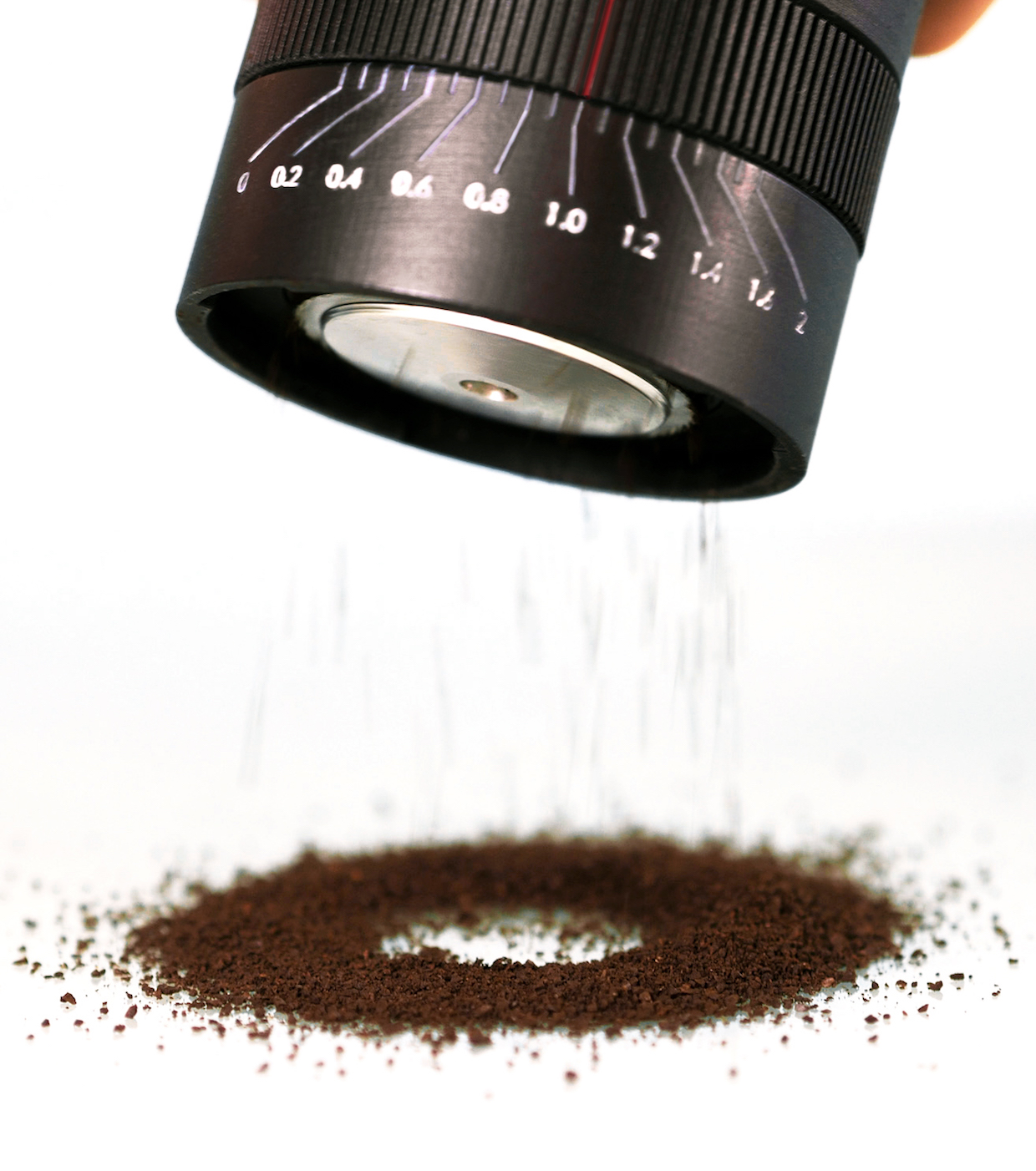 The seven-fluted cone burr of the Hiku burr set is 41 millimeters in diameter, nesting within a 55 millimeter ring burr, making it what the company says will be the largest burr set of any high-end handheld grinder. Despite its burr size, the company contends that its cutting geometry also makes it highly efficient and easy to use.

“The development of Hiku was a significant undertaking but we are very proud of the fact that we so far have three patents pending for unique innovations contained within the product,” Kanso Coffee Founder Amanda Zhong told Daily Coffee News.

With a capacity of about 50 grams of whole beans, the Hiku will weigh roughly 1.8 pounds by itself and is slated for delivery to Kickstarter backers who have more than doubled a fundraising goal in a current crowdfunding campaign.

Additional products in the Kanso Coffee line to be revealed at first as add-on rewards for crowdfunding backers include a coffee scoop with a bowl of either walnut or maple that echoes the shape of the grinder’s handle, and a test-tube bean storage system featuring a marble base that holds 12 borosilicate glass 20-gram-capacity tubes with maplewood stoppers with built-in degassing valves. 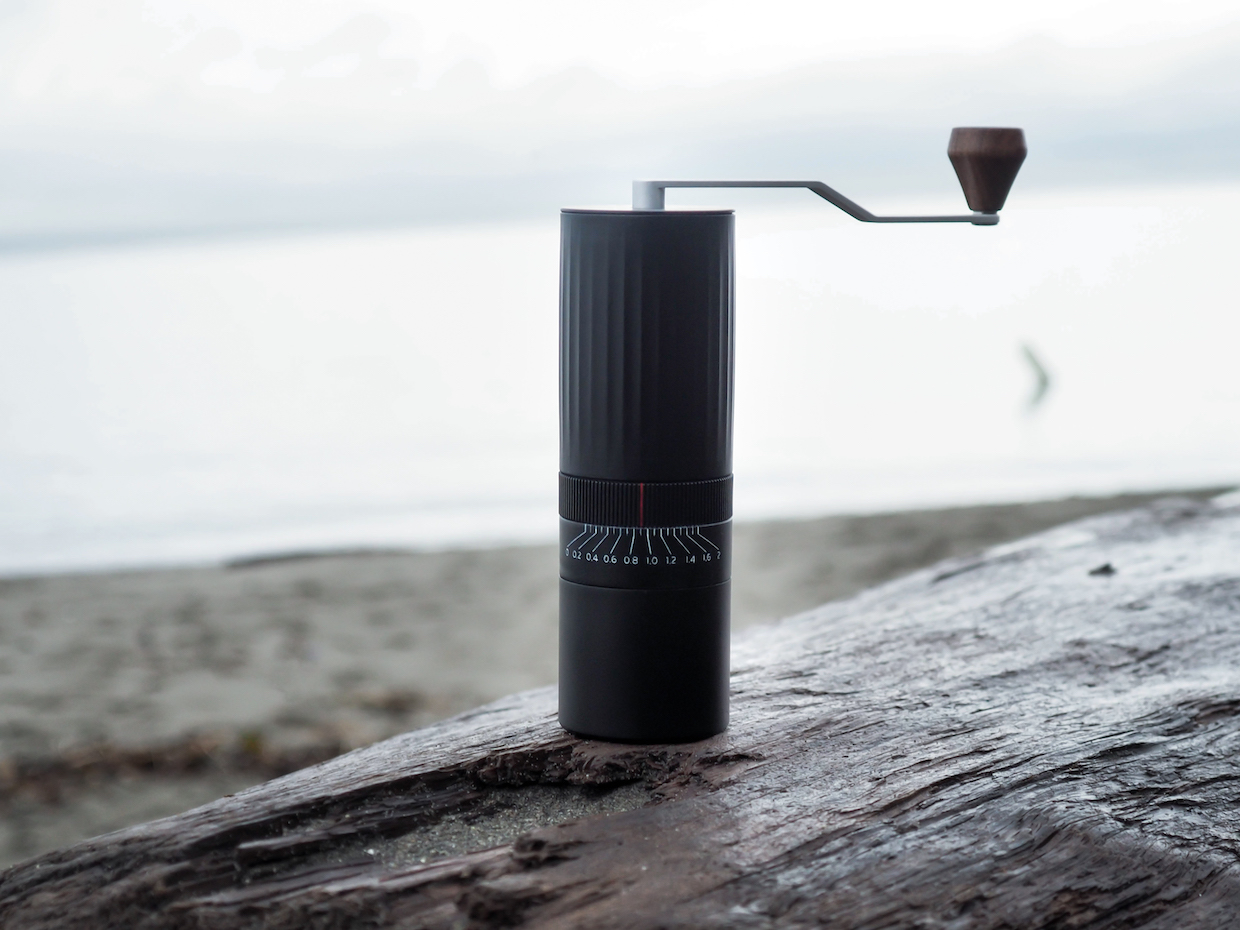 The Hiku grinder is expected to carry a suggested retail price of approximately US$229 after fulfillment of discounted preorders, and will be followed by a variety of other devices from Kanso Coffee.

“We definitely have follow-on products planned, including coffee brew devices, and in various stages of design,” Zhong said. “However it’s a bit early for me to formally announce anything since we’ve placed a focus on the successful launch of Hiku first.”

Meanwhile in Florida, Dr. Michel Nedeff, a fellow former dentist and longtime friend of the German Biernatek family, which founded the Kinu company, is heading up operations for the newly established North American arm. The partnership will involve holding U.S. patents and legally structuring the company from an office in Coral Gables, just outside Miami. 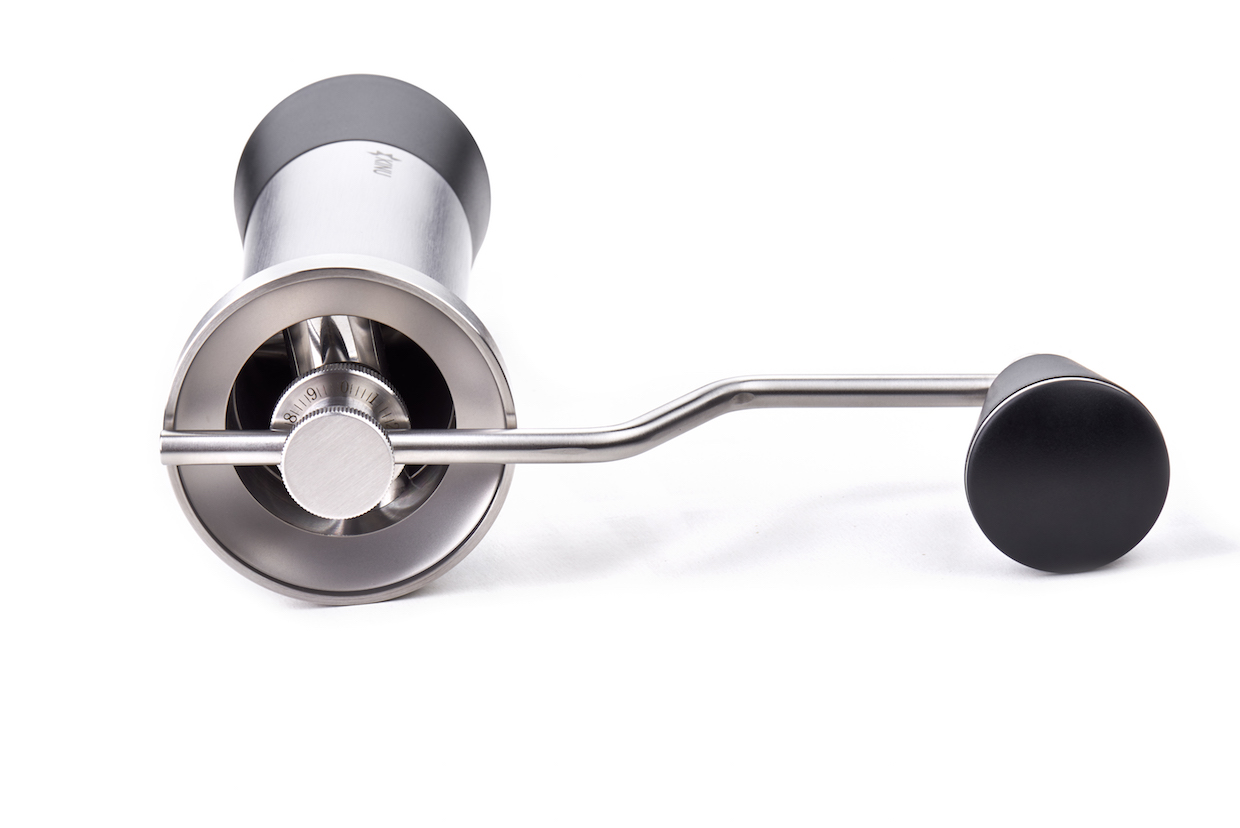 The Biernateks will continue handling business for the European and Asian markets from their home base in Germany. The company’s online store opened last month, featuring an improved M47 grinder. Additional Kinu models will be available for sale in the new year.

Based on feedback from users of the limited initial runs of the M38, M47 and M68 grinders the company rolled out last year, the new M47, which will be priced at $299, features the same patented Kinu alignment system and “screwless” construction yet with upgrades including a rubber gasket that keeps the adjustment stopper more securely in place and “Black Fusion” treatment on the burrs for greater resistance to rust and corrosion. 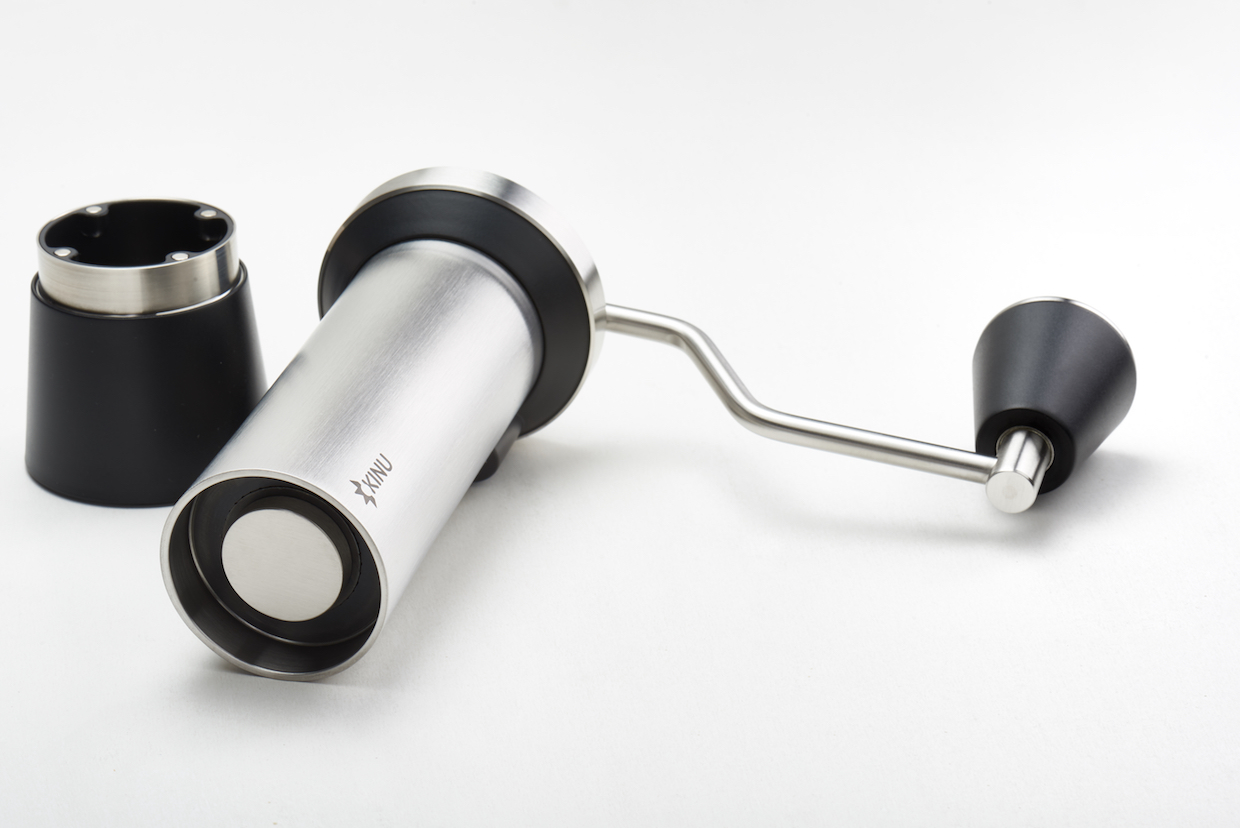 The ground coffee receptacle has evolved to be secured by magnets and nests within the column towards the burrs snugly enough as to generate a vacuum of suction as the users pulls it off, sucking any remaining particles out from among the burrs and  defeating any static cling for what the company contends results in zero retention.

A new clicking, micro-stepped adjustment mechanism is designed for grind setting repeatability. The grinder can therefore be adjusted for different methods in full revolutions and by larger marked gradations, and finally by clicking 0.01-millimeter steps for fine tuning between different coffees. 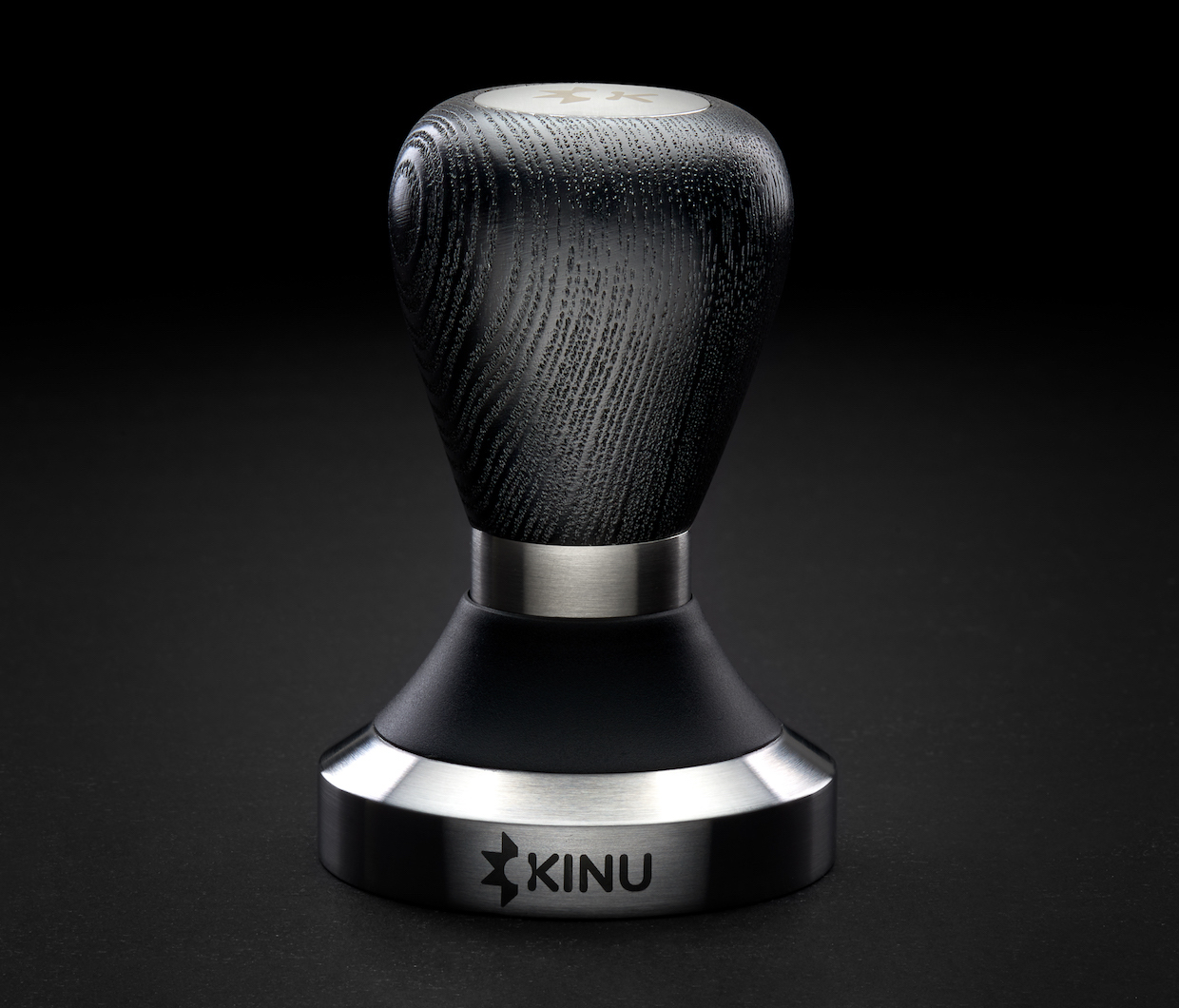 In 2018, a revamped M68 will launch with an estimated price of $950, constructed fully in stainless steel and featuring a suction mechanism on its base that holds the unit firmly enough in place for one-handed grinding of at least a single dose if the table or countertop is textured; longer if suctioned onto a smooth, flat surface. An adjustable tamper called the T58 and t-shirts featuring the company’s new logo design round out the inaugural offerings of the recently launched webstore.

Fact check here….
Kinu grinders have been around for quite some time now.
I have played with an m47 in April and it was not even the first iteration.

Hiku on the other hand is not available yet.
As with all kick starters, there is always the risk that the campaign may not get funded.

The hand held grinder with the biggest burrset (not counting table top units) is the helor 106 packing mazzer 71mm burrs.

I had high hopes for hiku but the dig at OE and false claim make me wonder how well have they done their home work….