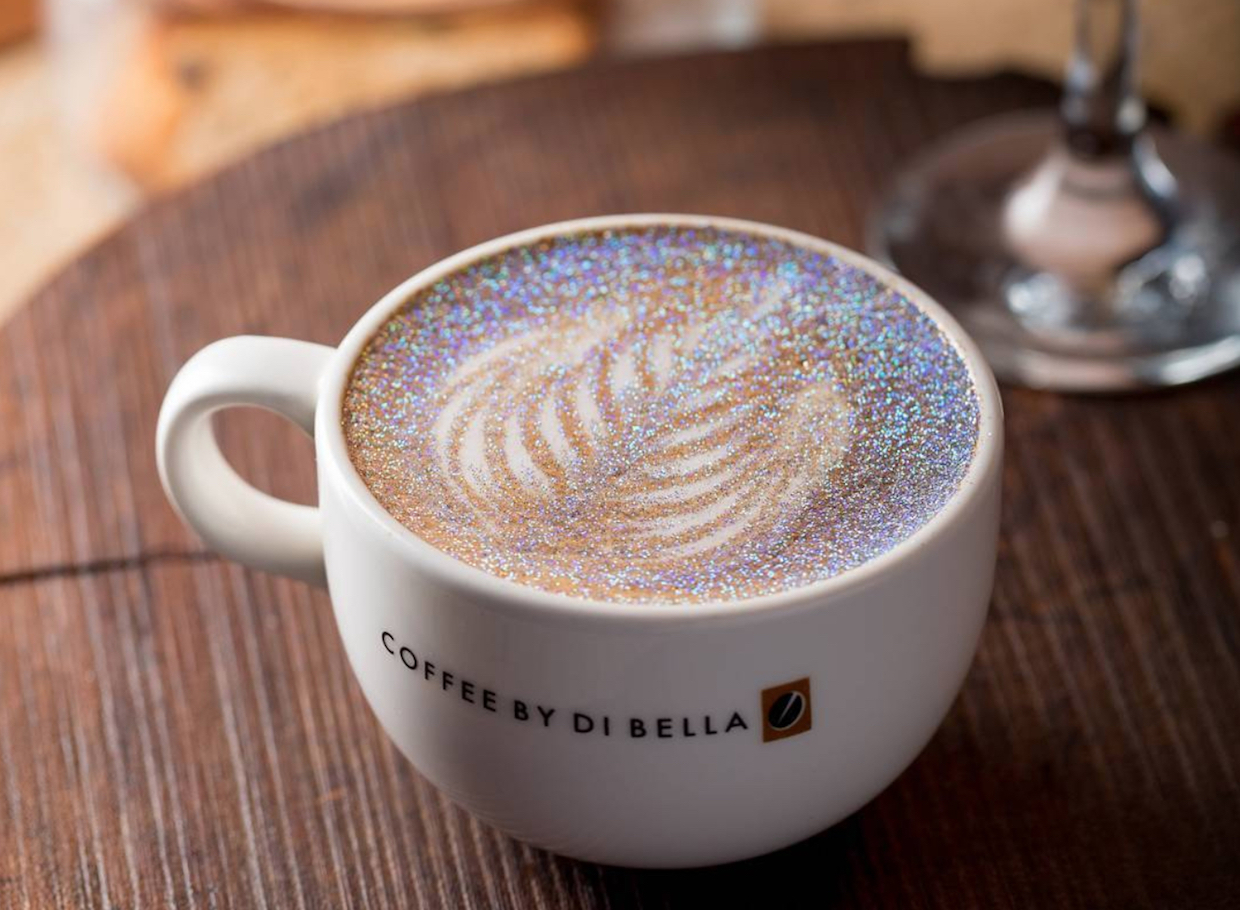 Whether they needed it or not, what lattes got in 2017 was a sprinkle of fairy dust.

In early November, reports began to emerge about shiny gold and holographic-looking “diamond cappuccinos” made at Coffee by Di Bella in Mumbai. A reflection of the shimmery rainbow trend in baked goods and unicorn-themed blended frozen drinks, these blingy capps looked like latte art made with a melted disco ball.

“One coffee joint is making all your dreams come true,” PopSugar gleefully reported, adding on Instagram, “Do you think this will make our insides sparkle?” Others were more skeptical. Writing for Mashable, Rachel Thompson sounded horrified. “Aside from the fact these sparkly creations are highly Instagrammable, it might be high time we left coffee the hell alone,” Thompson wrote.

In just a few months, these glittery lattes have spread like confetti at a 4-year-old’s birthday party to U.S. cafes from Bellevue, Washington to Sarasota, Florida. As they do, some have begun questioning whether that holographic effect on Di Bella’s “diamond cappuccino” can really be created without using non-toxic (but not edible) disco dust — the sort of glitter that scientists already classify as an environmental hazard.

“It could be that this stuff is inert and passes through your body,” Donald Schaffner, a professor of food science at Rutgers University, told Daily Coffee News. “The more nuanced answer is we don’t know about the safety of this. This is putting something in your body not designed as food. I can’t recommend it.”

The distinction with glitter, as cake decorators well know, is “non-toxic” versus “edible.” The latter, sold by baking suppliers and made with ingredients like sugar, gum arabic, maltodextrin, cornstarch and food coloring, can have a more muted visual impact. They don’t taste like anything and can add a little gleam.

Certain brands of rainbow disco dust are marketed to bakers as non-toxic, like crayons and Play-Doh. Unlike sugar-based decorations, non-toxic glitters are not considered edible. In January 2016, the Food and Drug Administration issued a statement advising bakers to remove these kinds of decorations before serving them to people.

“It has to be edible,” said Marianna Naum, a food policy analyst with the FDA. “Food contact safe is very different than edible. There are glitters and dust that are edible and are specifically produced for use in food. Those would be OK.”

At Point Loma Coffee in San Diego, manager Jane Wardlaw noticed the #glittercoffee concept through the Instagram curation of @thetrendybarista.

“Who doesn’t love a little sparkle for New Year’s?” said Wardlaw, who developed a glitter cappuccino as a holiday weekend promotion. For 75 cents extra, customers could also add sparkle to a hot chocolate or a latte.

Wardlaw bought pink and gold edible glitters from a cake supply company called Bakell, mixed the two together in a sifter and shook them onto the tops of drinks. It didn’t change the flavor, she said, but it gave the foam a soft, subtle shimmer.

“It didn’t translate quite as well as I’d like into pictures,” Wardlaw said, noting that some Instagrammers must have used a larger quantity of glitter. “But when it was in the daylight it would sparkle.”

Coffee by Di Bella, part of the Australian-born Di Bella coffee empire, has been close-lipped in the press about what makes its diamond cappuccino sparkle, saying only that it’s crystal sugar and food coloring. Drinkers have been skeptical because of how the glitter on those drinks behaved — it not only looked like disco dust, it stuck to lips like gloss and didn’t dissolve when mixed with water.

The edible glitter Wardlaw used didn’t dissolve quickly, but it didn’t leave its mark either. “Unless you’re a messy drinker, it just goes right down,” she said. “The most mess we got was from the baristas loading the sifter. They would be covered with glitter remnants. It made for a couple of really sparkly baristas for the day.”

Schaffner, the Rutgers scientist, expressed bemusement about glitter coffee when it came to using non-toxic glitters for the sake of visual impact. “As a food safety professional I can’t recommend something FDA says is not safe,” Schaffner said. “But if this was acutely toxic we would know. If people were falling over in coffee shops in Mumbai and London, we would know about it.”

“As people make food decisions, it’s about having more information and being able to make a true risk benefit calculation,” Chapman said. “I don’t want to go into a coffee place and buy something I think is food and it turns out it’s not food.”

Chapman wasn’t sure how to recreate a holographic sheen effect with edible substances, but said it wouldn’t surprise him if a scientist had figured out a way around plastic mirroring. But if that sprinkling is plastic, customers should know.

“There are physical hazards that could present themselves,” Chapman said. “Think about things that are not digestible … popcorn kernels, stuff our body can’t break down. Plastic is similar to that from a physical standpoint.

“When it comes to something like this I don’t know if we have a system to communicate those risks and help people make those choices.”

Could Starbucks be debuting a line of #glittercoffees by next summer? The food scientists were doubtful — consumer advisories for food safety can vary by state, and the process to get such a thing approved nationally would be “tedious,” Chapman said. He could see chains using inspiration, though. In the UK, Costa Coffee unveiled a limited time glitter upcharge around the holidays.

“It’s like the unicorn latte,” Chapman said. “Coffee chains and businesses are looking to differentiate.”

Schaffner will keep his personal coffee unadorned. For him glitter coffee is better seen than consumed.

“I would look at it, photograph it and share it on Twitter with a quippy comment about making your food holographic,” Schaffner said. “But I wouldn’t drink it and I wouldn’t recommend that my family or friends drink it.”

“it might be high time we left coffee the hell alone,” Thompson wrote.” ‘Nuff said.

Amen, that sums it up nicely !

Why is the company able to hide their ingredients and LIE about it? Why is there no Indian authority that looks into this? They even deleted comments on their instagram after a youtuber(!) who is not even a scientist revealed it’s plastic. This is shady af. I can’t believe they’re getting away with this, and pretty sure this wouldn’t even be possible in Europe. The press was gullible and happily advertised this instead of doing actual journalism. People loose their jobs over the smallest scandals nowadays. This is actually a huge deal and didn’ t cause any stirr?!

No need to actually credit any of the people who investigated it or anything? Not even when you are paraphrasing them?

OMG this is literally my new favorite. FYI the glitter on https://www.thesugarart.com/ is quality and would probably work great… Im going to see which products I have at home and will try out some glitter coffee!! Thanks!!