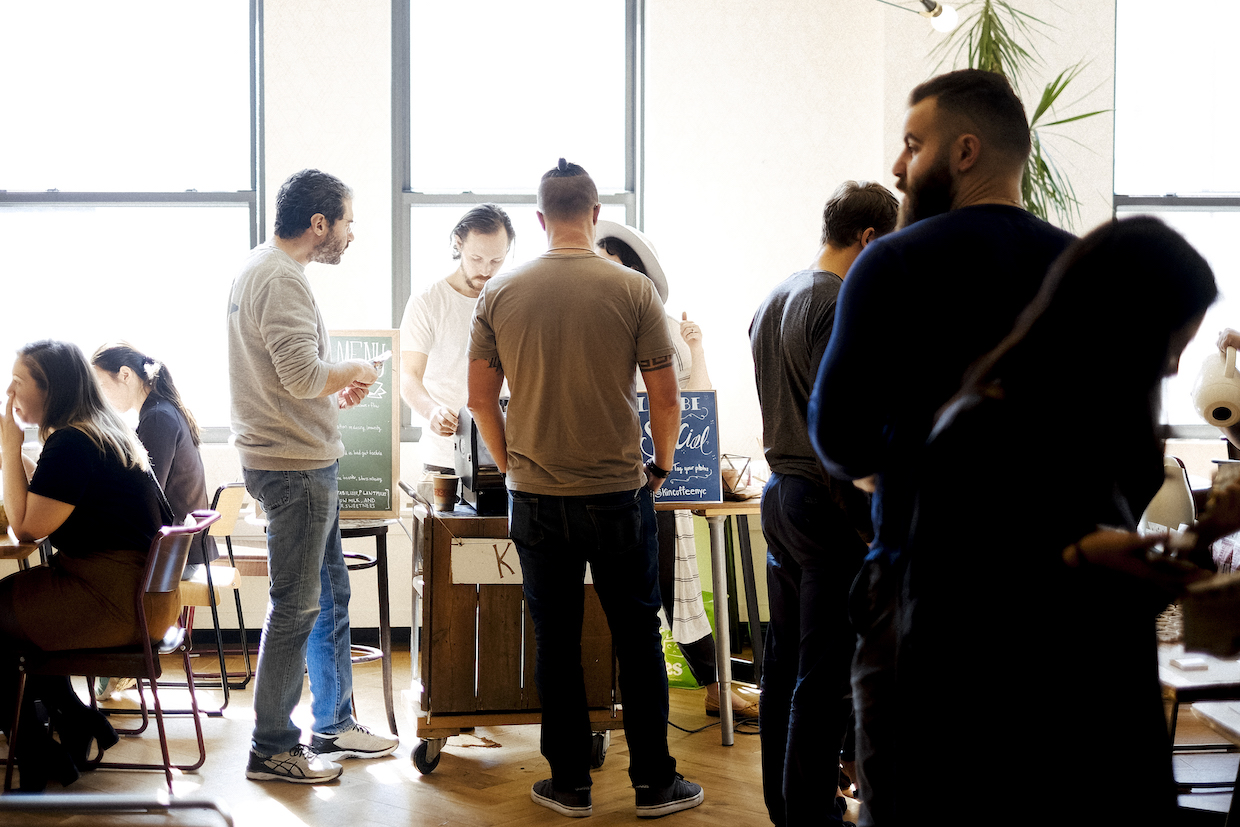 When she was freelancing as a stylist on film sets and photo shoots, Tabi Akins noticed that some companies would shell out for a private chef, ready to prep food to order.

“I remember this 16 hour shoot,” Akins told Daily Coffee News. “The private chef would make anything you wanted throughout the day. And the coffee was just this pot of coffee that sat there all day. It didn’t get turned over. They were sending interns out to get coffee at the nearest Starbucks.”

After hearing about a friend who helped do coffee service on the set of “The Walking Dead,” the idea for a new company sprang to live, and about a year and a half ago, Tabi and Mike Akins launched KIN Coffee from their home in Brooklyn, New York. 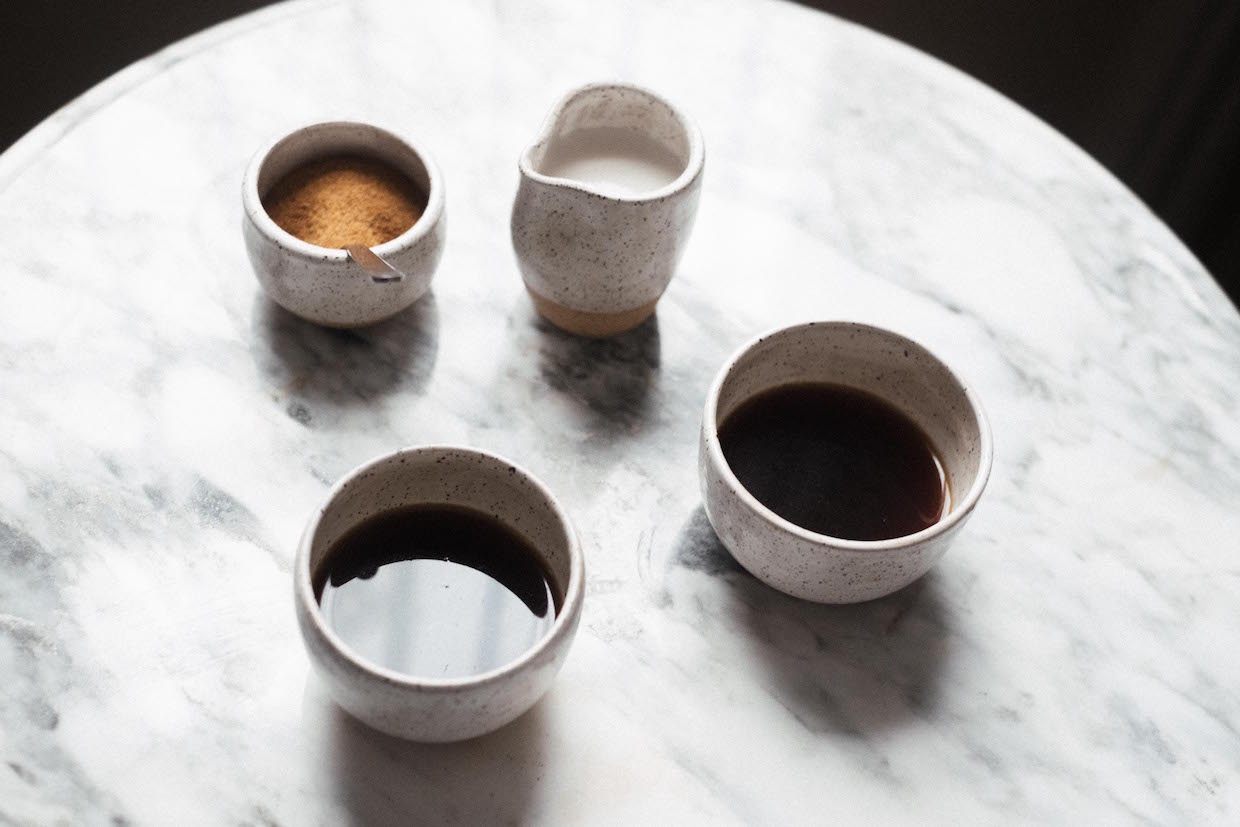 The Akinses believe the demand for high-end coffee catering is increasing, and their independence from a brick and mortar business combined with their small size has allowed them to grow at their own pace. A cafe could come later, but for now, everything’s on wheels.

“I think small scale is very valuable to people right now,” said Mike Akins, who has worked at such notable New York cafes as Hungry Ghost and Ninth Street Espresso, as well as at the importer Crop to Cup. “Just openness, flexibility, things like that. … It goes back to the products you use, how they affect the world around you, sourcing milks and dairy-free options in the most responsible way. Those are things the coffee world is moving towards and sees as valuable.”

Tabi and Mike Akins hail from Atlanta and will be married nine years this March. Cafes played a part in their early courtship, first at chain spots and then at Octane, which at the time served Counter Culture coffees. 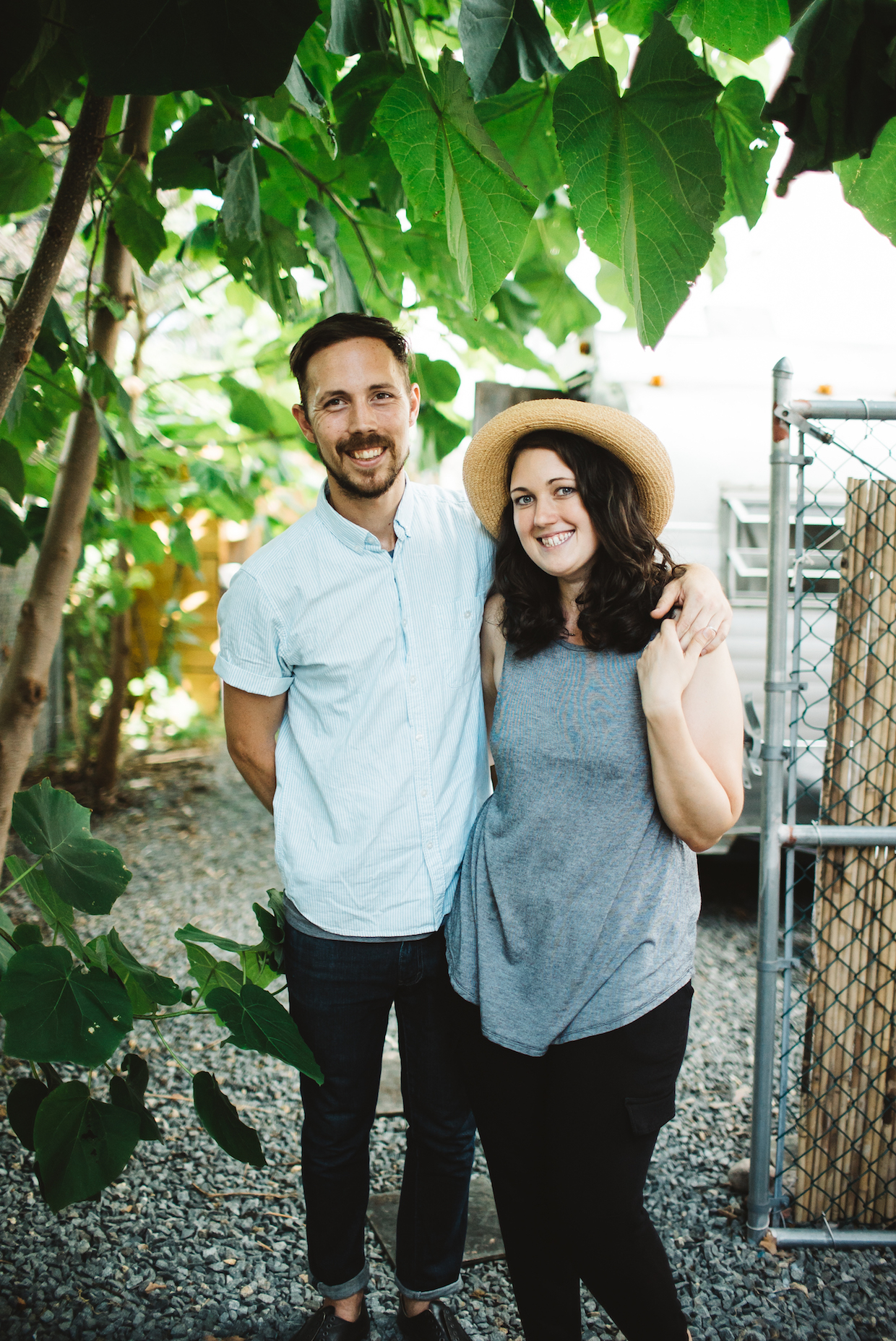 “That got us into coffee at a different level,” said Mike, adding that he laterl earned from the “militant machine” at Ninth Street Espresso, where there were just four menu items: hot coffee, cold coffee and espresso with or without milk. “They are just really good at their craft. I learned speed, I learned consistency from them.”

KIN Coffee aims combine Tabi’s industry connections with Mike’s coffee know-how. With the help of nearly $6,000 from an Indiegogo crowdfunding campaign, the Akinses renovated a 1974 Scotty Serro vintage camper in 2016. An old Blue Bottle pourover stand anchors their mobile v60 pourover coffee cart, where they also serve Toddy-made cold brew. KIN has been renting a La Marzocco GS3 but plans to purchase a Linea mini in the near future. 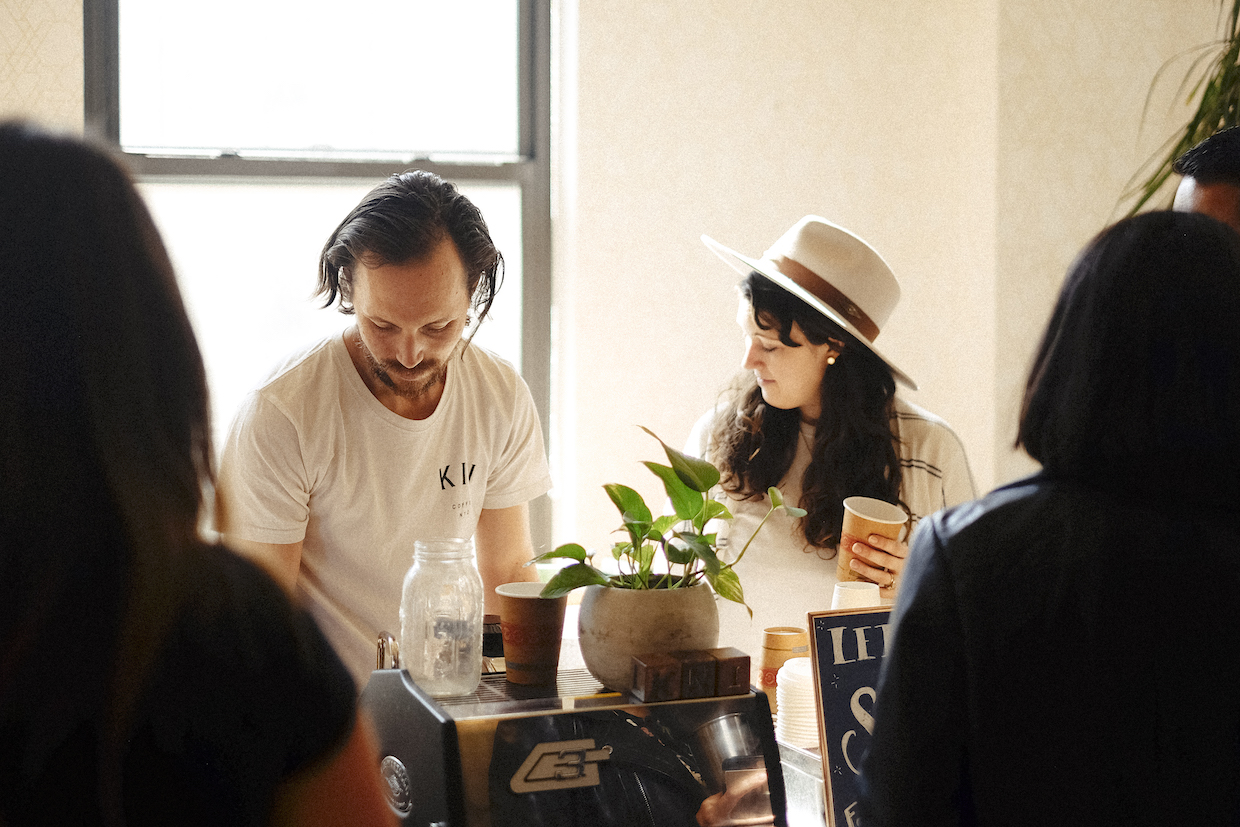 As for the coffees, Mike likes to buy from his friend Joel Eastlick, a roaster who recently relocated from New York to Tampa, Florida. Because Eastlick Coffee does not have a brick and mortar space either, Eastlick is “not locked into a certain region or profile,” Mike Akins said. “He cups constantly and continuously gets new samples. He’ll have nine coffees at once in his repertoire.”

When KIN shows up at an art event or coworking space, Tabi takes orders while Mike makes the coffee. Until recently, Mike has also kept up a few outside barista shifts to “keep [his] head in the game.”

“We’re creating the cafe experience at these events,” Mike said. “If you’re on a shoot all day, you’re not stopping and taking a second to get a pourover, taking the time to talk to somebody.” 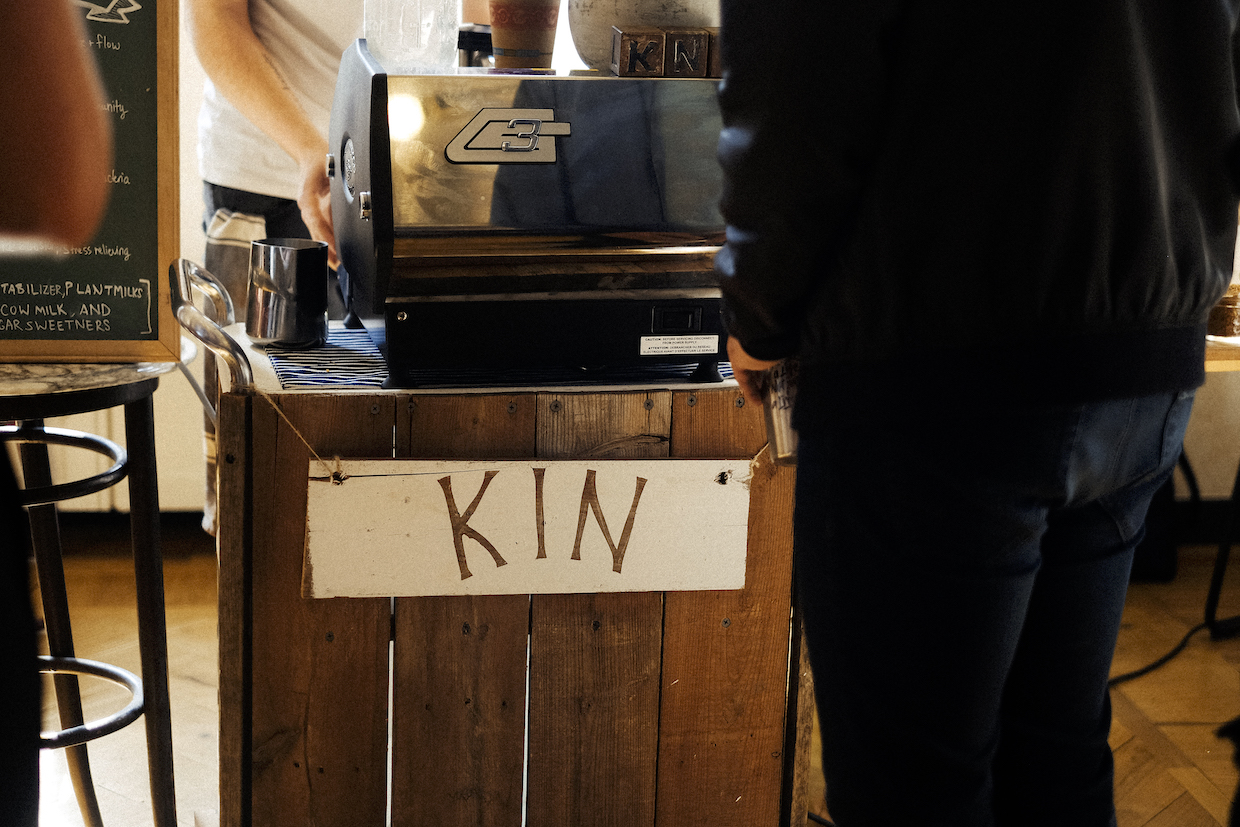 KIN has been doing office parties and festivals, and finally gearing up to get into the production world. In addition to catering, KIN Coffee recently launched a home products line featuring handmade ceramics from Red Hook artist Chrislyn Durham. Tabi envisions pieces like these as analog to special cocktail glasses, a way to bring the cafe home.

“Our love for coffee has always been built around the ritual aspect of it, the community aspect of it,” Tabi said. “People really come together around coffee. That’s been beautiful and surprising … It’s a whole different experience to be served something. Even if that coffee was best quality, there’s something different about the experience of being served coffee rather than filling your cup out of a drip machine.”

Would be cool to see something like this in Seattle, I work at ATLAS Workbase right now and I think it would be neat: https://www.atlasworkbase.com/seattle/coworking-space/