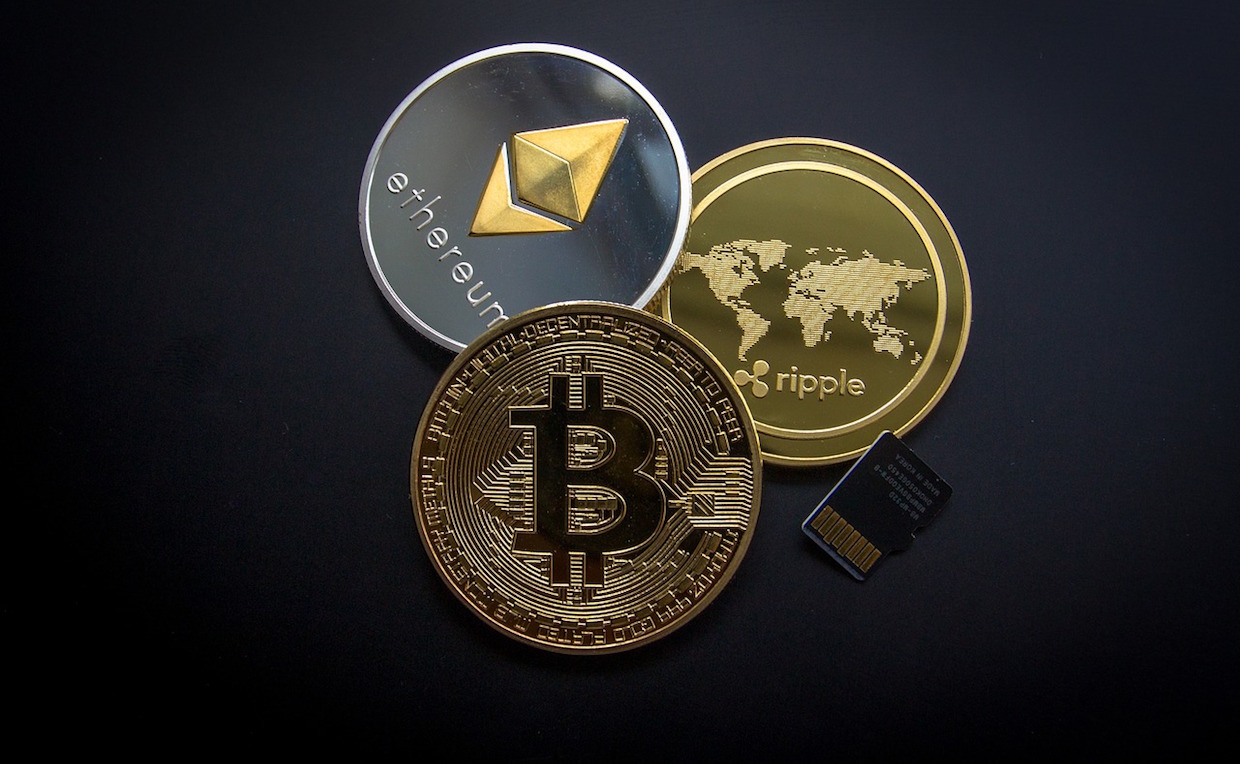 As media coverage of the cryptocurrency craze careens across categories from tech to finance, business to politics, and even occasionally crime, a slowly growing number of specialty coffee people are taking notice. Individual companies are gradually beginning to accept Bitcoin and other cryptocurrencies as payment, and some are wading more deeply into crypto’s less charted waters.

Take Pull Espresso Machines, which now accepts cryptocurrency for payments on Pull machine purchases. Pull’s owner, Todd Millar, even has a small “rig” set up for “mining” Bitcoin and other currencies himself — more for the personal edification than for the financial reward.

“I’m trying to understand a little bit more by being involved in it, by actually doing the mining part of it,” Millar told Daily Coffee News, aware of the irony of embracing bleeding-edge technology to help support a business building electronics-free manual lever espresso machines with a sort of old-world ethos. 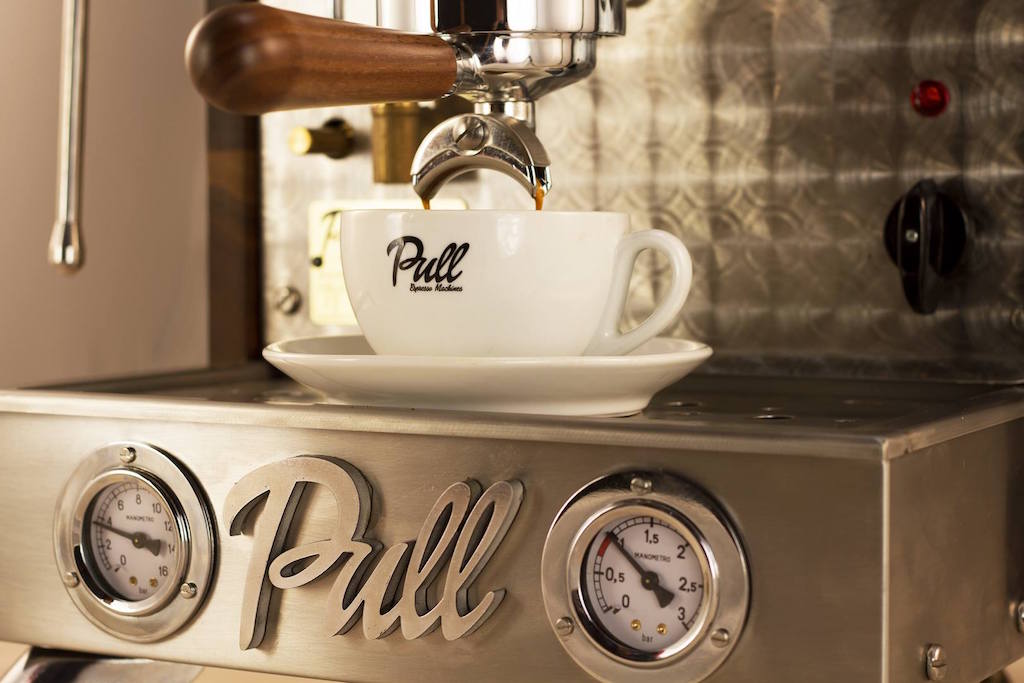 The “rig” in use for his small mining operation is a bunch of linked, high-performance computer graphics cards dedicated solely to the task of receiving and verifying a never-ending stream of encrypted transactions that, once sorted, are stored forever in a decentralize public ledger. In the case of Bitcoin, the successful verification and entry of each transaction is also what triggers the release of new coinage into circulation. A portion of this and of the tiny Bitcoin transaction fee is rewarded to the race-winning rig, hence the term “mining.”

Millar admits that while the cryptocurrency phenomenon is hard to grasp, it fast becomes an intellectual rabbit hole the closer one gets to understanding it.

“I can choose to hang on to the crypto and speculate the market, or I can immediately take that exact value and turn it in for real U.S. dollars,” said Millar. “There are lots of companies, lots of services that do it for very small fees. For me, it’s a more secure way of doing business, especially with international customers. This is a global business, it’s not just the USA, not just the U.S. dollar. Using a global currency like this really opens us up as a company.”

Millar does generally keep the cryptocurrency he earns as opposed to exchanging it for U.S. dollars, though. So does Pourtables maker Libra Coffee, another retailer in the specialty coffee industry with an interest in cryptocurrency. Libra is primarily an online roasted coffee merchant, offering a subscription service and a la carte coffee products purchasable the old-fashioned way, via credit cards. 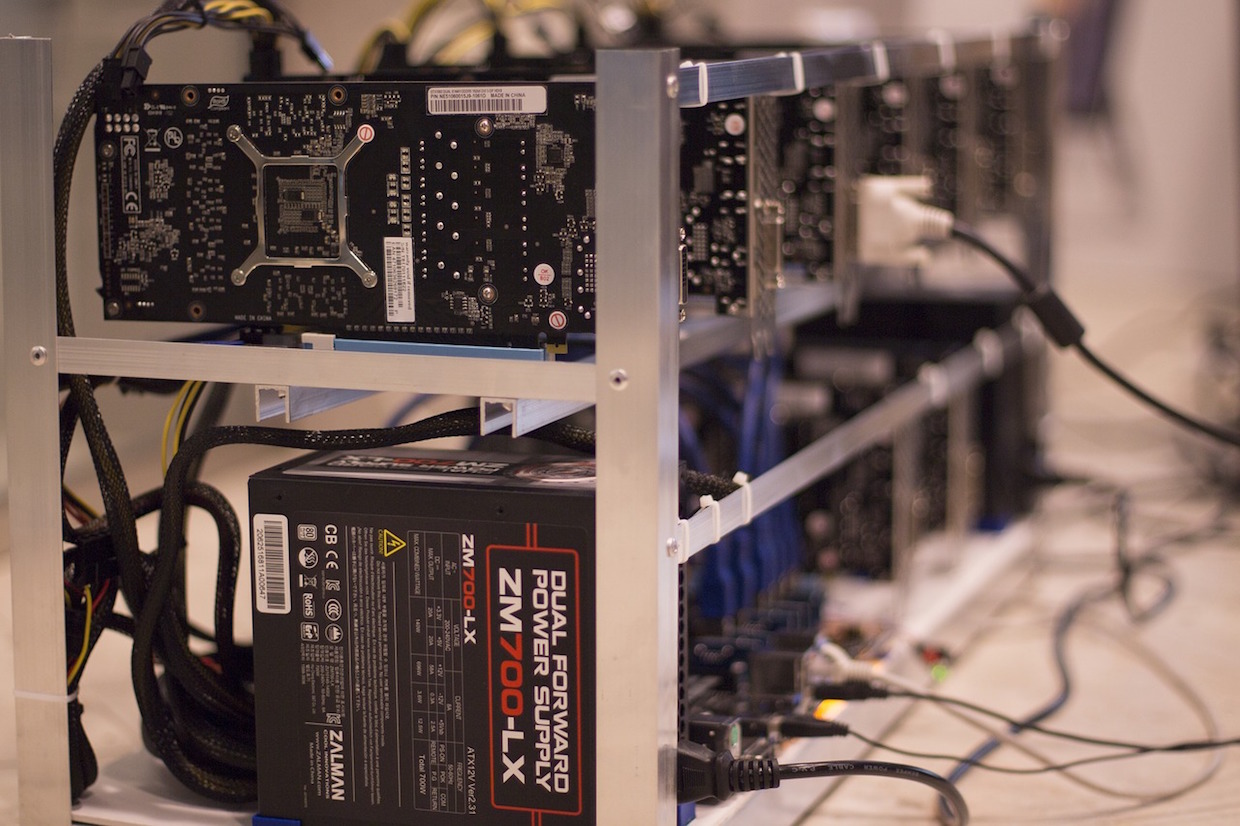 “Generally, credit card companies take 2-4 percent transaction fees straight off the top for just being a middleman,” Libra founder and roaster Eric Medina told Daily Coffee News. “My thoughts are that if Bitcoin or another cryptocurrency is mass adopted, then it will allow us to increase our profit margin.”

Medina is an enthusiast and a believer to the extent that Libra Coffee has launched a special coffee blend called HODL, as an appeal to crypto culture. “HODL” stands for “Hang On for Dear Life,” an expression among crypto-fans for times when the speculative value of a currency swings wildly.

“Terms like HODL, Lambos, To the Moon, and all the other vernacular is a fun way to communicate about the trading volatility of the crypto space, but for Bitcoin to actually replace central bank money we have to spend it and replace it, and not day-trade it,” said Medina. “HODL coffee is a way to spend your Bitcoin, and if we get enough companies to do the same then you grow the Bitcoin/crypto economy.”

As an equipment manufacturer and seller, Millar has been burned by customers, by suppliers, by credit card companies, and others. For purveyors like Millar and Medina, the breakneck boom-and-bust rollercoaster of Bitcoin — or of any of the other 1,500+ currently traded cryptocurrencies — value is neither a draw nor a deterrent. Millar points out that risk is an inherent part of any business. 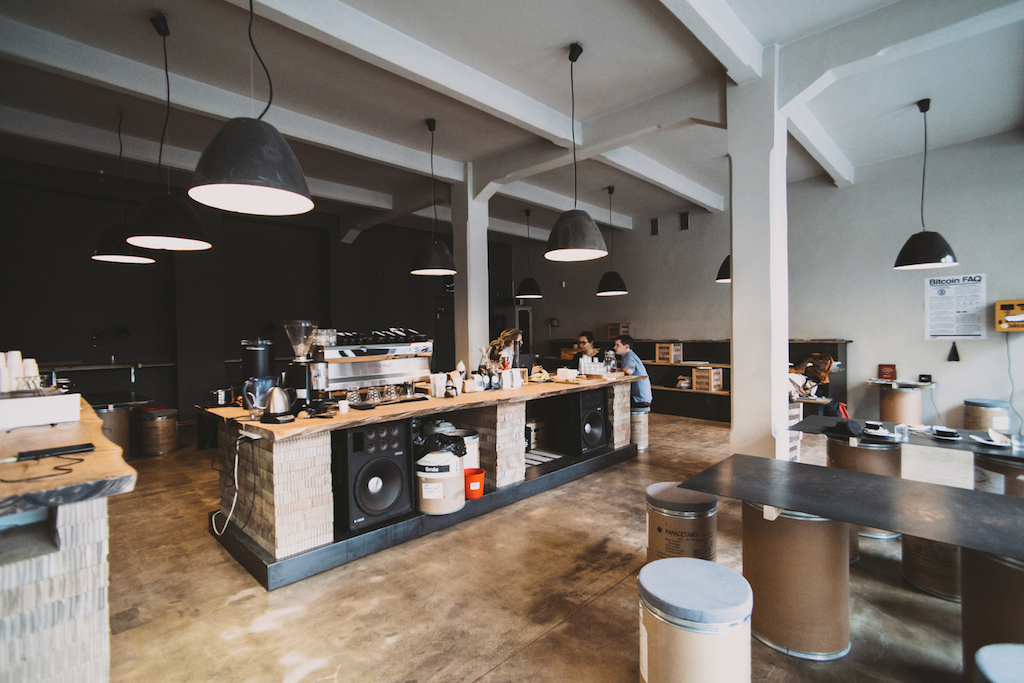 A handful of coffee retailers throughout the world have been early adopters of this mentality when it comes to crypto. A new cafe in Dublin, Ireland, currently accepts the cryptocurrencies Litecoin and Ethereum. A Prague cafe called Bitcoin Coffee, operated by a kind of collective of crypto-anarchists under the name Paralelní Polis, has been accepting Bitcoin since as far back as 2014, creating a retail space that is inintentional disorienting to visitors accustomed to traditional cash payments. Yet another new cafe in Singapore accepts various forms of cashless payments, including Bitcoin and its own cryptocurrency, Ducatus.

While such operations currently live with the value swings associated with crypto, it’s the security, transparency, cost-efficiency, speed and control inherent to the underlying platform that provides the appeal. That underlying technology is the blockchain, for which currency exchange is only one of many possible applications.

Blockchain is a system of recording and encrypting data in an interlocking way, while also being a system physically comprised by a decentralized network of computers, rather than one central server. Both factors contribute to the security and transparency it provides.

A network spread far and wide is not only less vulnerable to singular hacking attacks or outages, but also alleviates the need to trust any one single entity or institution. Cryptocurrencies are considered to have entered the mainstream, after all, in reaction to the financial crash of 2008, when trust in big banks and the governments that bail them out reached a breaking point.

By circumventing these institutions, participants not only dodge the fees they charge for doing business and the delays inherent to their systems, but also the need to have any faith in their security, their integrity, or how responsibly (or not) they handle one’s finances.

When a user sends a transaction request into a blockchain, rather than going through a single institution or entity, it’s broadcast throughout a decentralized network of, in most cases, thousands of individual computers, often referred to as “nodes,” around the world, setting off a race to see which node is the first one to solve the virtual puzzle that generates the encryption according to a given system’s protocols.

The winner of that race is rewarded with a bit of cryptocurrency — the source of which differs depending on the type of cryptocurrency involved — and then the rest of nodes keep working essentially until the majority of them have verified that the first one got it right. The record is then sealed throughout the great decentralized ledger, as it were. 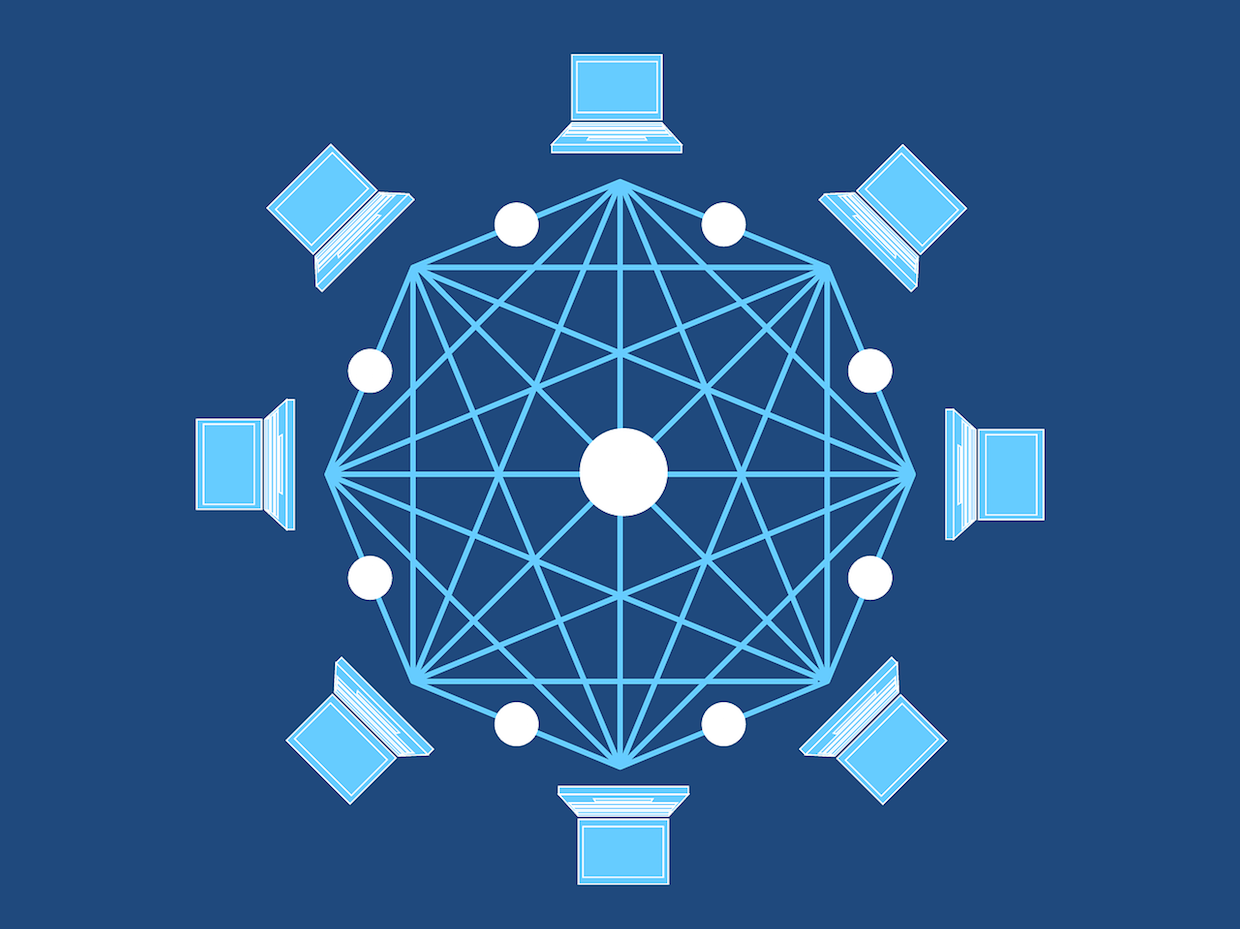 Each of these records, be it a financial transaction, a contract, or other sort of exchange, is then stacked one on top of another in a manner not unlike virtual Lego bricks, in that the encryption of the next file actually incorporates a number or some other data point drawn from the record before, like one Lego nob sticking upward into the next Lego brick. A bunch of these records is eventually sealed into a “block,” and eventually the blocks interlock as well, hence the blockchain.

These transactions are all completely visible to anyone on the internet, which gives the system its valued transparency, even if the identities of the humans involved can be kept secret if they want. Yet it is by virtue of the interlocking cryptography that if anyone attempted to change any part of a record after it is sealed, it would instantly cause a disruption throughout the entire chain. There is no computer on Earth fast or powerful enough to not only crack but also change and correct an entire blockchain all at once, especially given that these chains are also continuously growing. It is therefore considered to be incorruptible.

Not only does blockchain technology now provide the basis for “smart contracts,” it can also be used to record prices paid, quantities ordered, shipping and receiving info, and other data points for a variety of industries. In the case of specialty coffee, this includes coffee varieties, altitudes, processing methods and other origin-related details, all in a format that can never be altered or lost once the record is sealed.

In the next installment of our two-part series on cryptocurrency and blockchain, we’ll take a look at how blockchain technology actually works when applied to specialty coffee at origin.