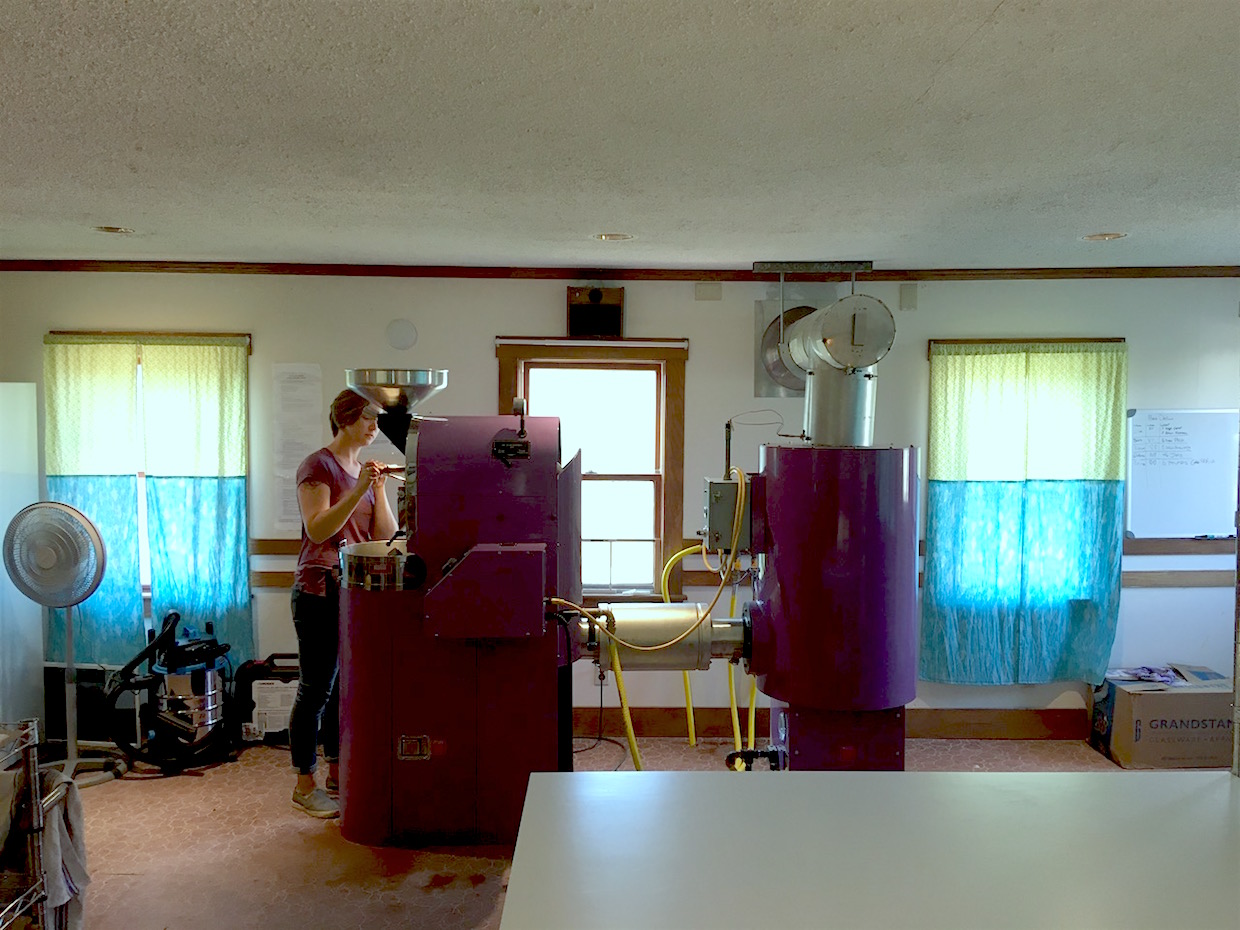 Living roughly 12 nautical miles off the coast of Maine, surrounded by the Atlantic Ocean, the year-round population of the tiny island of Monhegan has to fend for itself in many ways. It also must balance the need to cater to the seasonal uptick in tourism and part-time residents.

Earlier this summer, a new roasting company took up the flame to become the island’s resource for fresh-roasted coffee, although in time Monhegan Coffee Roasters intends to provide more than beans alone, while also moving coffee from the island to the mainland.

“Currently, there is one place open to the public in the wintertime, and that’s the general store,” Monhegan Coffee Roasters Co-Owner and Head Roaster Carley Mayhew told Daily Coffee News. “Part of the idea behind the roaster was to have a business that was sustained with off-island orders so we could have our doors open to whoever happens to walk by in the middle of winter and wants a cup of coffee, without relying on that revenue stream to stay operational.” 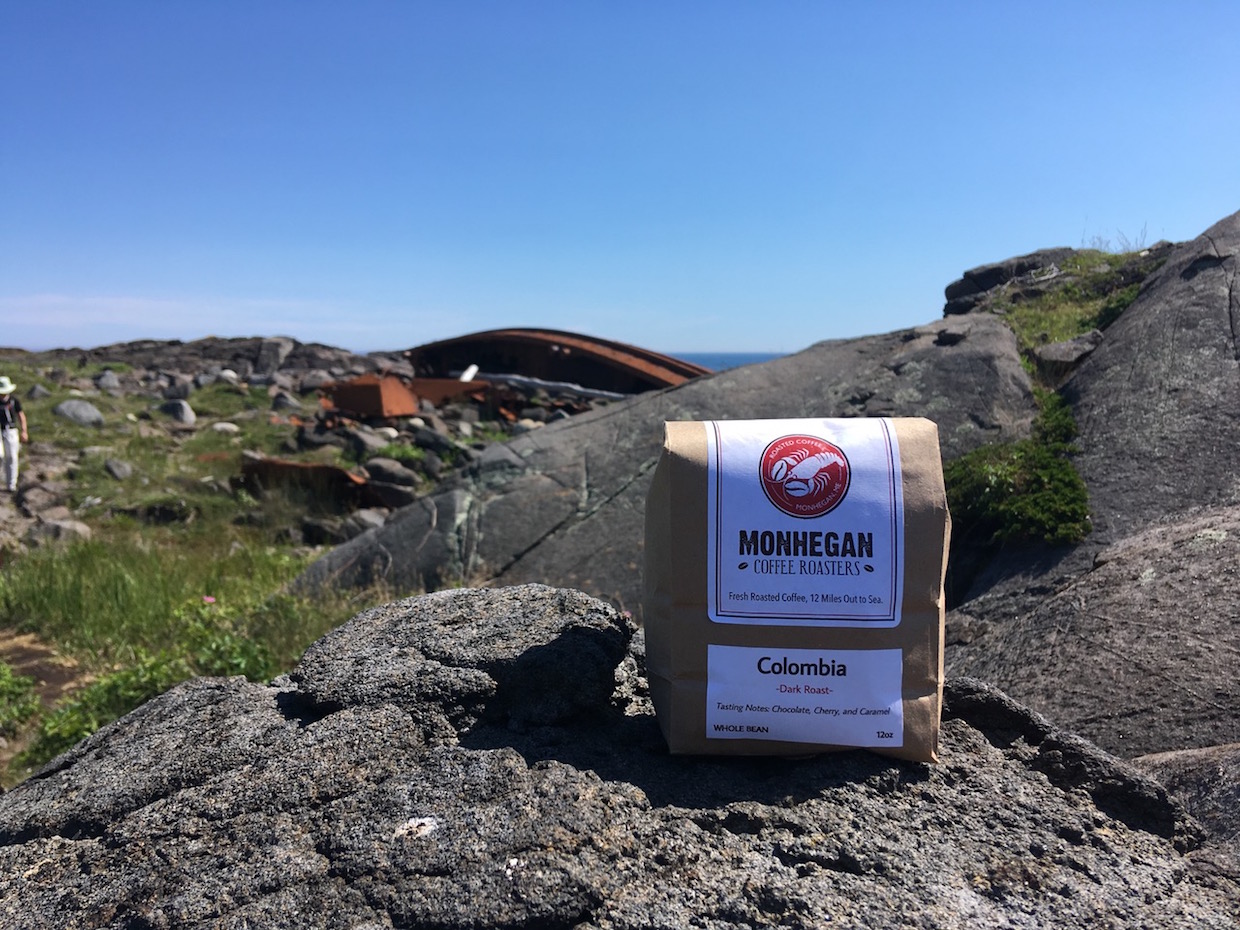 Mott Feibusch, Mayhew’s partner in coffee and in life, added that the impact of their business on the workers at origin is another positive outcome they hope to achieve.

“We have been loving coffee from other islands,” said Feibusch, “and that really starts another conversation about sustainability for not just our tiny Maine Island, but the communities and farms where we are sourcing from.”

Mayhew and Feibusch have lived on Monhegan since 2015. The pair met in the woodworking program at the University of the Arts in Philadelphia, where Feibusch sought skills that would come in handy on the island on which he already knew he intended to live full-time, after having spent so many happy summers at his grandparents’ house there as a child.

“Being on an island, it isn’t easy hiring a contractor when everyone is busy getting ready for the season ahead, so it is important to have the skills to do it yourself, or to trade skill sets,” Feibusch said of the months spent building the roastery up to code for inspection. “Neither of us are great plumbers, but we have a friend that is. I went and worked on a roof for that friend, and he plumbed in our three bay sink.”

In addition to the coffee business, Feibusch and Mayhew both still work other jobs, although Feibusch said this is not necessarily for financial reasons. Feibusch is both a cabinet-maker and half of the two-man crew at the island’s power station; Mayhew is a visual artist and the island’s postmaster.

“We live in a community of around 60 people year-round, so it’s not just a cash flow reason to have a few balls in the air at all times,” said Feibusch. “We need to keep things running out here.” 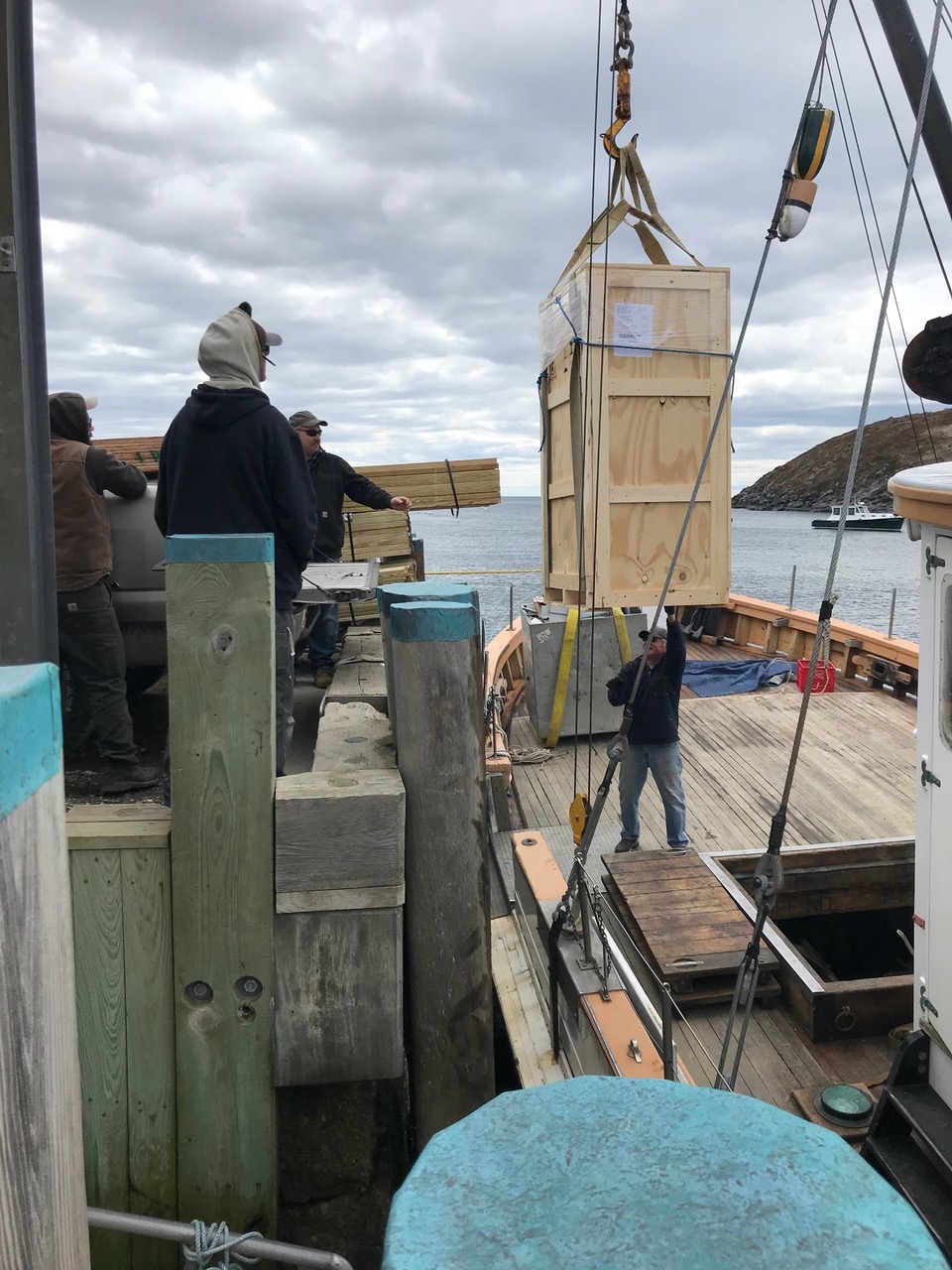 “This is all a part of doing business out here, and we knew about the risks going into this, but it can be stressful seeing that much money literally dangling in air.” — Monhegan Coffee Roasters Co-Founder Mott Feibusch

Monhegan Coffee keeps its Diedrich IR-3 running along with a propane-fueled catalytic afterburner in a roughly 700-square-foot space the company shares with equally newly launched local chocolatier La Nef Chocolate, while the couple’s home is across the street from the equally critical local resource, the Monhegan Brewing Company.

“Monhegan is about a mile long and three quarters of a mile wide, so we are essentially neighbors with everyone,” said Mayhew. “Matt and Mary Weber, the owners of Monhegan Brewing, have been extremely supportive of our business and provide another venue to sell our beans and cold brew. We also collaborated on a beer, their Mad Cow Coffee Milk Stout, which is infused with our cold brew. We have a blend that we sell only at the brewery. We call it Half Seas Over, which is an old English term for being just the right amount of intoxicated.”

Operating a roastery on an island as small and remote as Monhegan carries its own complex set of challenges. Apart from 100-percent humidity in the summer and having to pull double-duty running the power station or delivering mail, many things are also substantially more expensive.

“Everything takes an extra step to get to us, which means we have to pay double the freight,” said Mayhew. “There are no cars on Monhegan, only work trucks that stay out on the island since we do not have a car ferry. This means that everything we bring to the island is handled by the boatline in some way, usually indicating an extra charge.”

Operating off the grid as its own municipal power district, Feibusch said the island’s power plant includes a 10-kilowatt solar array in addition to some diesel-fired micro-turbines, for which everyone pays roughly seven times more per kilowatt hour than power customers inshore. And apart from additional freight fees, the need for everything to be shipped in also overwhelms the very small island with packaging waste. 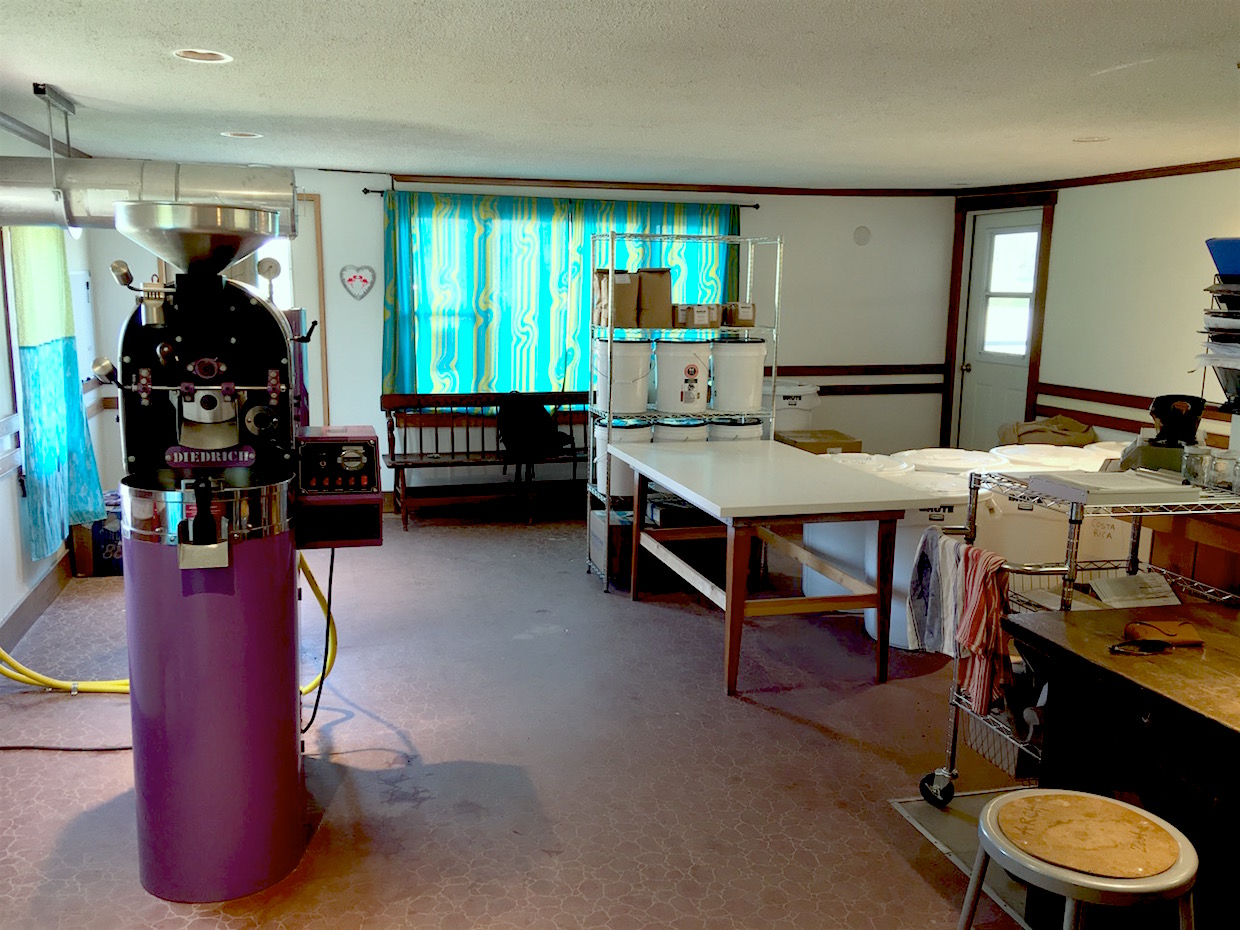 “This was a bigger concern of ours when we were starting up than most other environmental factors,” said Mayhew, who provides reusable buckets to wholesale accounts and opts for a valveless, directly compostable Kraft paper bag for retail beans, counting on rapid product turnover to account for freshness.

“We are sure this will evolve as we grow, but we will continue to look for environmentally friendly solutions,” said Mayhew. “We want it to be easy for our customers to handle the waste our products create. Conservation is key, and we debate whether our afterburner is better or worse for the environment because we burn more fuel, but our exhaust is cleaner, and the neighborhood doesn’t smell like roasting coffee.”

The coffee itself starts off as greens sourced through Royal Coffee New York, before being darkened in a team effort, with Feisbusch manipulating the mechanized variables while Mayhew listens, looks and sniffs.

“I love machines, and I get really in tune with the sounds they make, and why they make them,” said Feibusch, whose tastes run darker, while Mayhew prefers a lighter roast. “I fiddle with the heat and air control, and write down all the changes to those things and when they happened, while Carley is manning the trier. We are at the point where Carley, who has a more refined palate, suggests we try and develop a different flavor, or bring out a fuller body, and I make a couple of changes to what I call our ‘call sheet.'”

Stylistically, Mayhew said Monhegan Coffee prioritizes body, based on feedback from the community. And though it’s a dark-roast-loving market, the MCR nevertheless takes care not to push profiles into bitterness or past the point of recognizable origin characteristics.

“We aim to highlight the natural flavor of the bean,” said Mayhew. “We are attending a training in the fall that will hopefully cover some of our grey areas, but for now, we are getting great results from our beans with a slightly later and extended first crack on most roasts.” 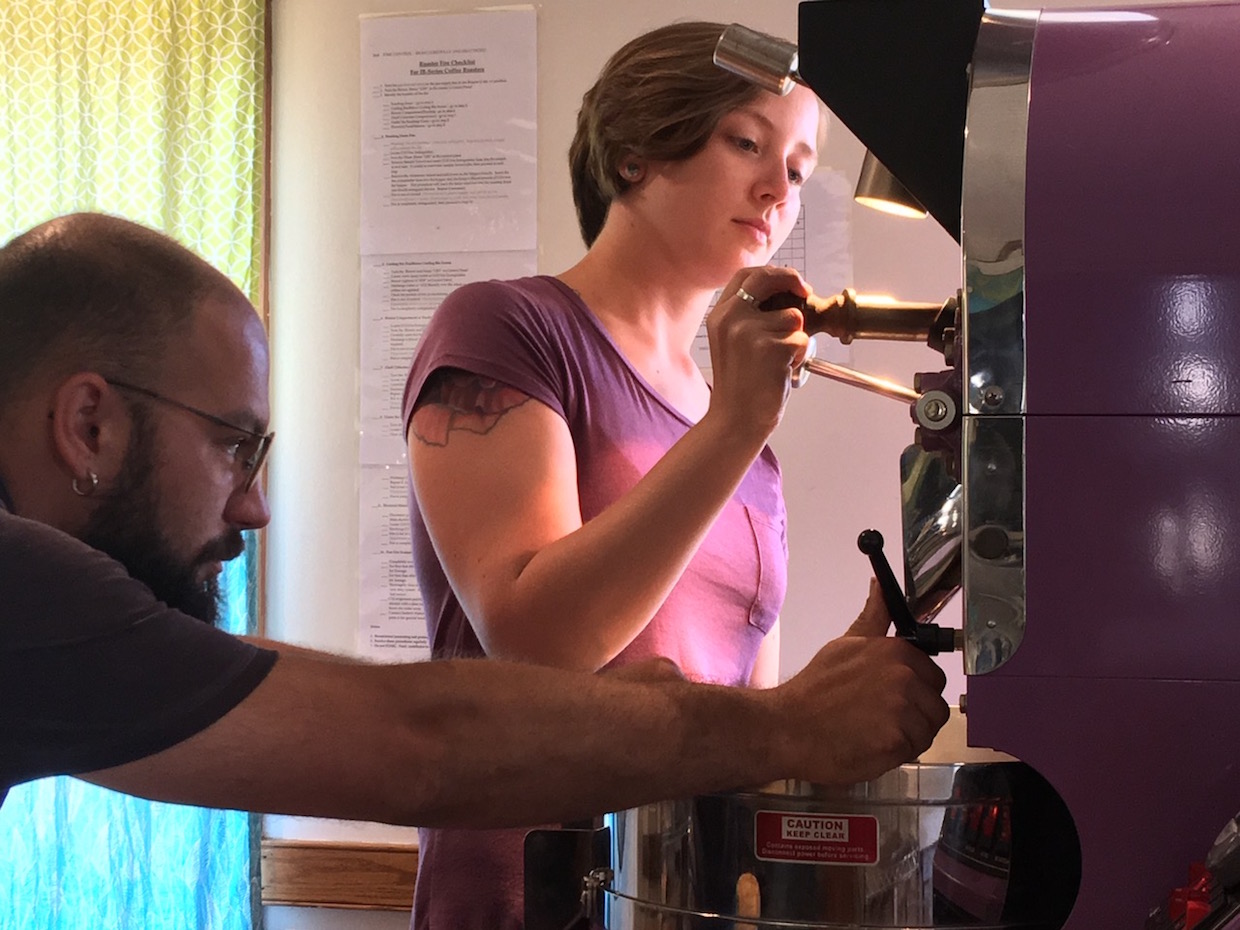 Monhegan Coffee Roasters intends to grow slowly, meeting demand as it comes, although the duo also looks forward to setting up a coffee shop that constitutes an expansion both for the business as well as the community.

“We hope that it would entice more people out to the island to stay for longer by creating another social spot, which would in turn help sales, which would mean maybe we would need to hire someone,” said Mayhew. “Having gainful employment year round would help another person live here year round, and yeah, we want a sustainable community.”

While Mayhew appreciates what the coffee company can bring to the island, Feibusch also expressed excitement about what it sends out, possibly including himself.

“The prospect of going somewhere warm for a week in the middle of winter is pretty appealing when it comes to living on an island 12 miles off the coast of Maine, so sourcing beans directly from farms and being able to create relationships where we can buy lots a year in advance would be ideal,” said Feibusch. “Promoting direct trade practices and talking about how that relationship is more important than a stamp of approval comes up a lot in conversation, and when we are fielding questions about our business practices. It’s a good goal to work towards these relationships, but we still have a long way to go before we get to that point.”

I’ve read the history of Monhegan Island, and how it played key roles in the development of the New England coast long before even the Mayflower sailed. Fasciinating that these two have settled there, and have a vision to make a go of a real live roastery.