Thousands Protest in Kaffa, Ethiopia, as Coffee’s Origin is Politicized 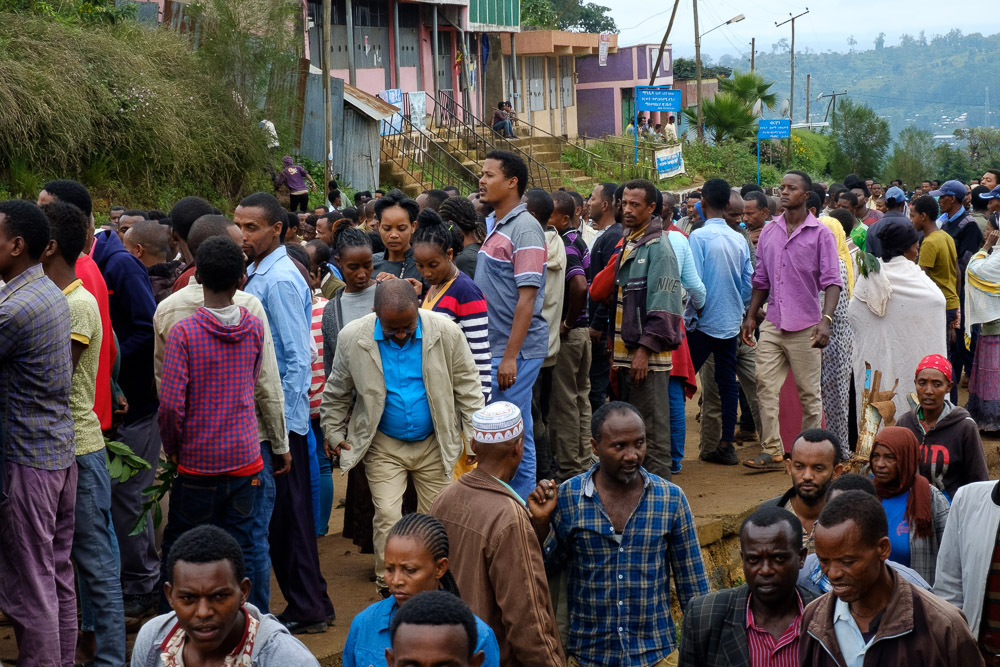 Thousands of people from Kaffa, Ethiopia, gathered in Bonga to protest following a controversial tourism sign at the airport in Jimma. All photos by Emily McIntyre.

Kaffa, Ethiopia: The people here carry their identity close to the bone, pride pulsing with their blood — and never was this clearer than on the days of Nov. 7-11, 2018, when they staged peaceful protests in Bonga, the administrative center of the Kaffa zone.

The Keffa people, who had never protested before, had blocked the roads for 50 kilometers surrounding Bonga, and had absolutely no intention of relinquishing until their demands were met or the federal soldiers were brought in, whichever came first. Some travelers, both foreign and Ethiopian, were stuck in local pensions and hotels, while others remained in nearby Wush Wush and in coffee washing stations off the beaten path with no food. 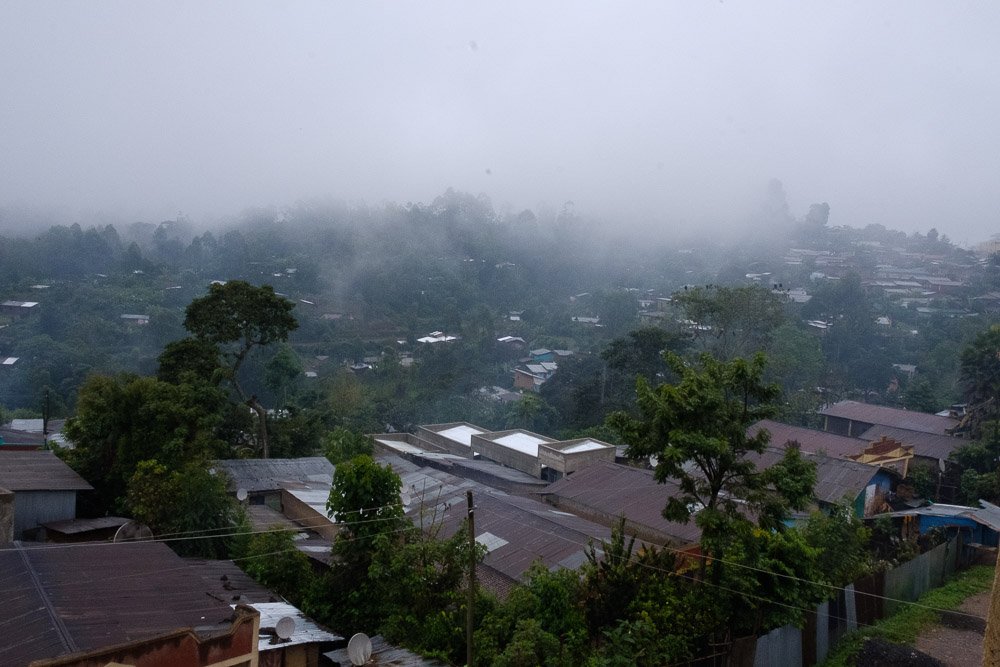 A view of Bonga from a nearby hotel. Roads were blocked, leaving many travelers confined.

Every road was blocked: Blocked with straggling lines of stones as red as the road; blocked with pale tree branches; but mostly, blocked with people — thousands of them. They walked slowly. Land Rovers, Toyotas and Nissans moved among them, with drivers eventually coming to full stops to allow the eddying crowds to grow more dense, lining not just the streets but also the buildings nearby, the heaps of rubbish and road material, and the tops of gates and walls. In nearly every hand there was a coffee branch. Gleaming green leaves shaded beans that looked airbrushed, green into red, red into pink.

“Coffee is from Kaffa!” They shouted, over, and over, and over, shaking their coffee branches. Fresh-faced teenage boys inched through the crowds in trucks with loudspeakers while organizers and crowds echoed the call and response. “Coffee is from Bonga! They must answer us! We demand answers!” Women greeted each other by smiling and bumping shoulders. Children ran underfoot with bright colored shirts and muddy feet. It was a district-wide block party, a rally, and a stubborn demand for answers all at once. 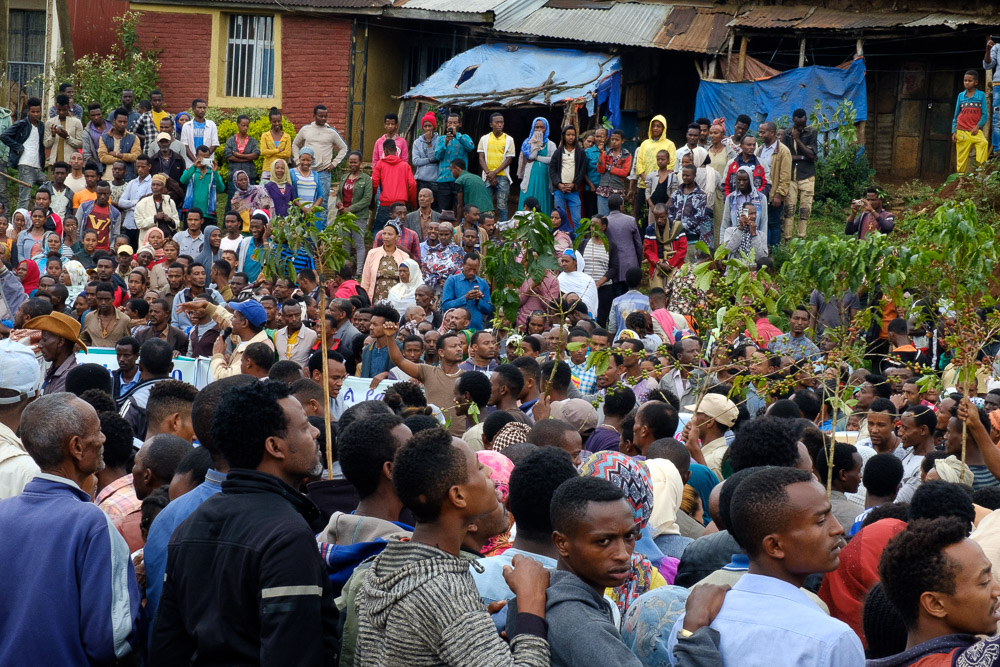 Why did the Keffa people plan demonstrations that brought tens and possibly hundreds of thousands of people from the nearby woredas to shout at the top of their lungs, “Coffee is from Kaffa!”?

In an historical context, Kaffa and Jimma (sometimes spelled Djimma) have had a long-standing jostle over which region, precisely, is the origin of coffee. To outsiders, it seems like a moot point — Kaldi and his goats are apocryphal, lost in the mists of the stunning multi-layered mountains of western Ethiopia — but to people whose tribal and village allegiance is a central matter of identity, the distinction matters.

The Jimma regional airport has huge banners saying, “Welcome to Djimma, the home land of Coffee Arabica!”, a claim based on the fact that Jimma was once the capital of the Kaffa Province before it was dissolved. The government-funded National Coffee Museum in Bonga is also an institution standing idle. It can’t be opened until somebody official says exactly where the origin of coffee is. Meanwhile, coffee is the lifeblood of the local people and a major source of revenue for everyone in the area. 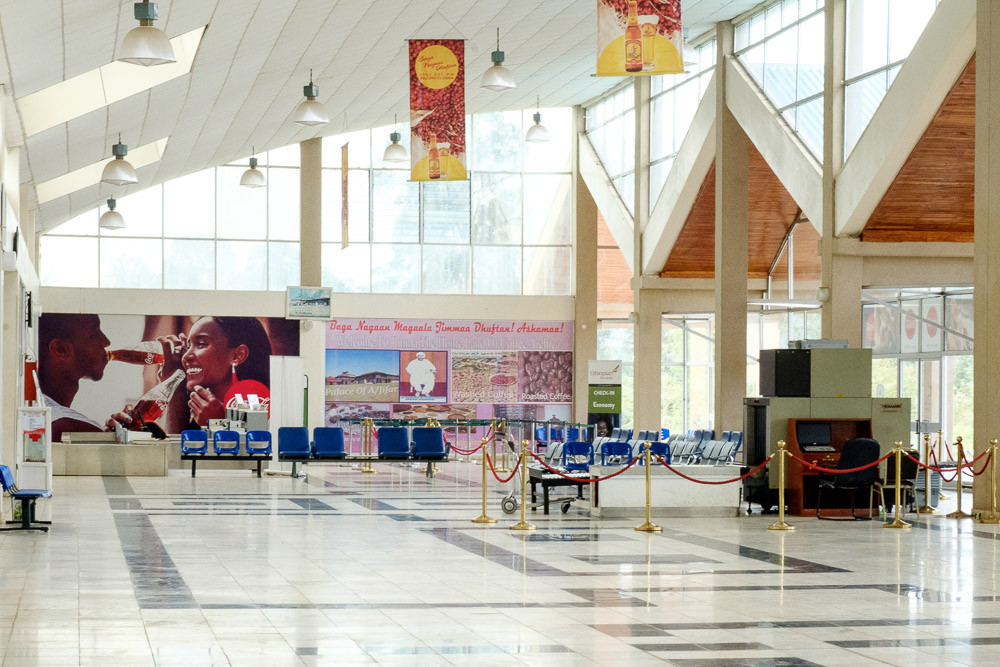 According to a Reporter Ethiopia article written by Brook Abu and published on Nov. 10, an original posting by Ethiopian Airlines was this:

“Join us on December 4-5, 2018 as coffee lovers from all over the world come to the beginning of it all- where humankind has been enjoying a great cup of coffee for centuries! Coffee producers, roasters, exporters, researchers, writers will gather at the UN Conference Center followed by a coffee safari to Kaffa-the region that brought this magical bean to YOU!”

Shortly after, “Kaffa” was edited to “Jimma.” This was exactly what the people feared. With social media accelerating the transmission of news, 200 local organizers pulled together an enormous number of people for a peaceful protest in Kaffa.

A protest organizer (referred to here as E for the sake of anonymity), a father of two in his mid-30s, said he and his team had worked very hard to keep people peaceful. “We are trying to protect everyone,” E said, adding with quiet conviction that “Coffee is for Kaffa. This is beyond an economic question.” 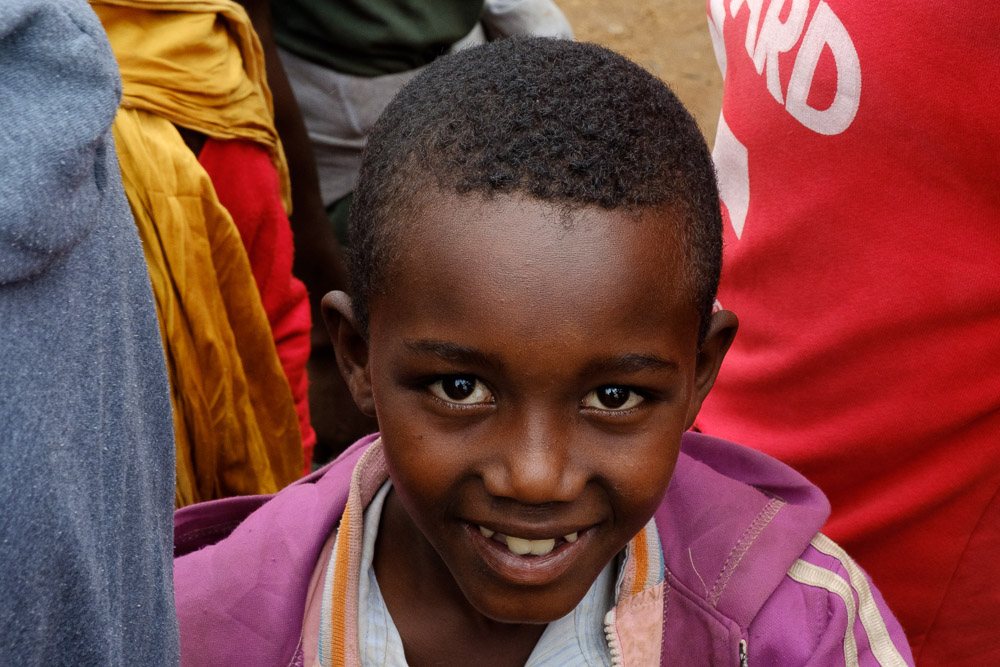 A boy at the protests in Bonga.

Unspoken was the implication that if the protest became violent — if any of the young people lost their self-control and threw a stone at someone, or took a stick and bashed a vehicle — the federal soldiers waiting in Wush Wush would descend.

Beyond what may be the purest intentions of the youthful protesters, there are some clandestine elements at play here. New Ethiopian Prime Minister Dr. Abiy Ahmed has cost a lot of corrupt men a lot of money. If he isn’t tightening the restrictions on what coffee exporters can use their financing for — it’s an all-too-common practice for exporters to sell endless boxes of coffee at a loss in order to have foreign currency and clout with the banks to finance importing more profitable items, like trucks — then he is wresting government housing back from men who’ve illegally occupied and then rented them out, and he is handing the keys to the actual disabled and extremely poor people for which they were built.

He’s making it harder to do business without paying proper taxes. He is, in other words, making things more difficult for many men who have made their fortunes off of other people’s misfortunes — and those men refuse to go down without a fight. 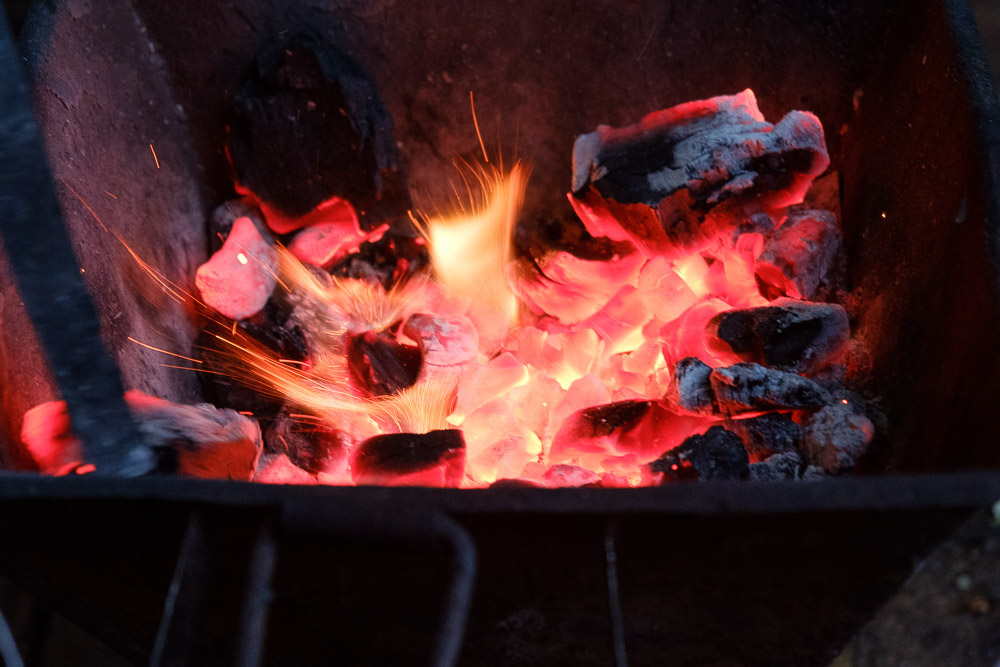 The rest of the world has heard news of increased violence in Ethiopia since Dr. Abiy’s election. What you may not realize is that many of these conflicts have been caused by the old guard exerting their influence to destabilize the country, spreading rumors to convince local people that, for example, because Dr. Abiy is from Jimma, these recent social media posts are proof that Oromia is favored by the new government. If they can cause enough trouble, enough deaths and destruction, Dr. Abiy’s government might fail. They can have their power back. It is the youth and the local people who stand to lose.

Starting peacefully, the protests slowly turned more intense as the government made no response and there were rumors of soldiers arriving. On the third day, the Coffee & Tea Authority issued an apology for any misunderstandings — but didn’t ratify Kaffa as the birthplace of coffee. Protest organizers began to pull sticks out of teenager’s hands and shout pleas for peace over the loudspeakers. Shops had been closed for days. Hotels were running out of food. Protesting was one thing, but blocking the roads was a different, larger infraction.

Finally, on the morning of Sunday, Nov. 11, the local police — who had until then stood by with smiles on their faces supporting the protests — began to clear the roads, manually shifting stones and branches from the red dirt under the broad sweeps of Kaffa’s blue-green hills. The mood turned ugly. Youths threw stones and shouted threats. The police called the federal soldiers, who entered Bonga around 6 p.m. The crowd melted away without a shot being fired. Kaffa’s first protest had no casualties.

Some arrests were made of the zone officials, who shouldn’t have authorized the blocking of the roads. Five days after it began, the protest was over, but its implications are broad and immediate. A few days later, the Kaffa leadership council voted to apply for separate statehood, following the recent recognition of Sidama as a separate state. 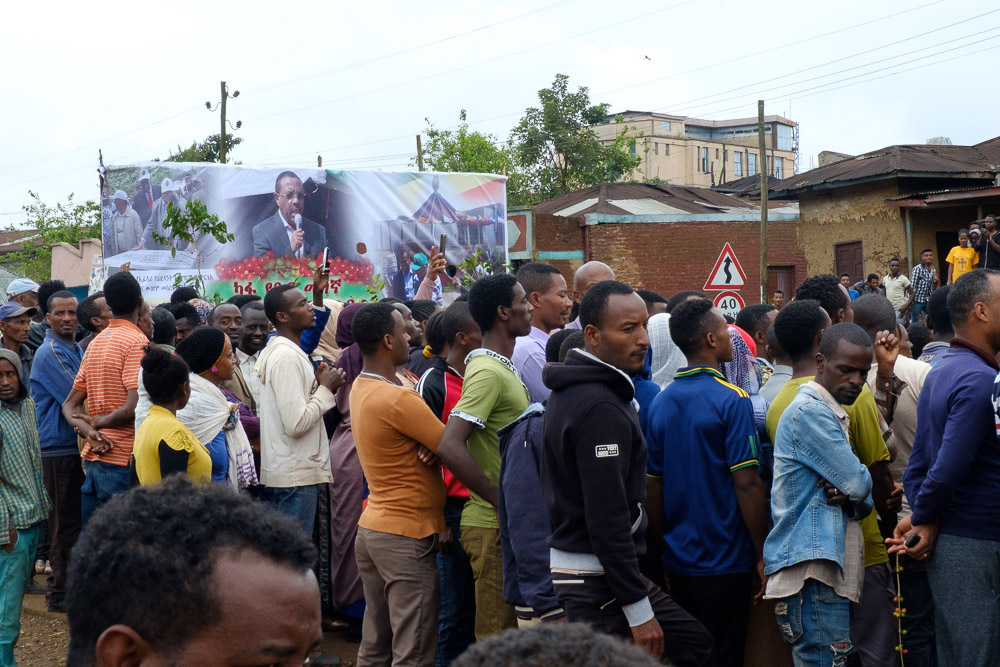 Since the Coffee & Tea Authority apologized for the misunderstanding but did not announce Kaffa as the birthplace of coffee, the controversy continues. Still, whether the exact site is Kaffa or Jimma, Ethiopia will remain the mystic motherland for coffee, wreathed in mists of frankincense and rich like a sini cup full of traditional buna.

Emily McIntyre
Founder and CEO of Catalyst Trade, Emily McIntyre is a serial coffee entrepreneur and journalist focused on re-inventing specialty coffee sustainability. Based in Portland, Oregon, Emily has lived in Ethiopia and consulted in nearly every aspect of the coffee supply chain from farm to the cafe. Learn more at www.catalyst-trade.com.

Do you have photos of the protests in the road? I do. I was in a Land Rover.

I’m from kafa, oromo brothers are majority and we love each other and we also love jimma city but we hate a person or any organizations or may be regjons who tries to still our culture…