On an Island in the DRC’s Lake Kivu, Coffee Begins to Bear Economic Fruit 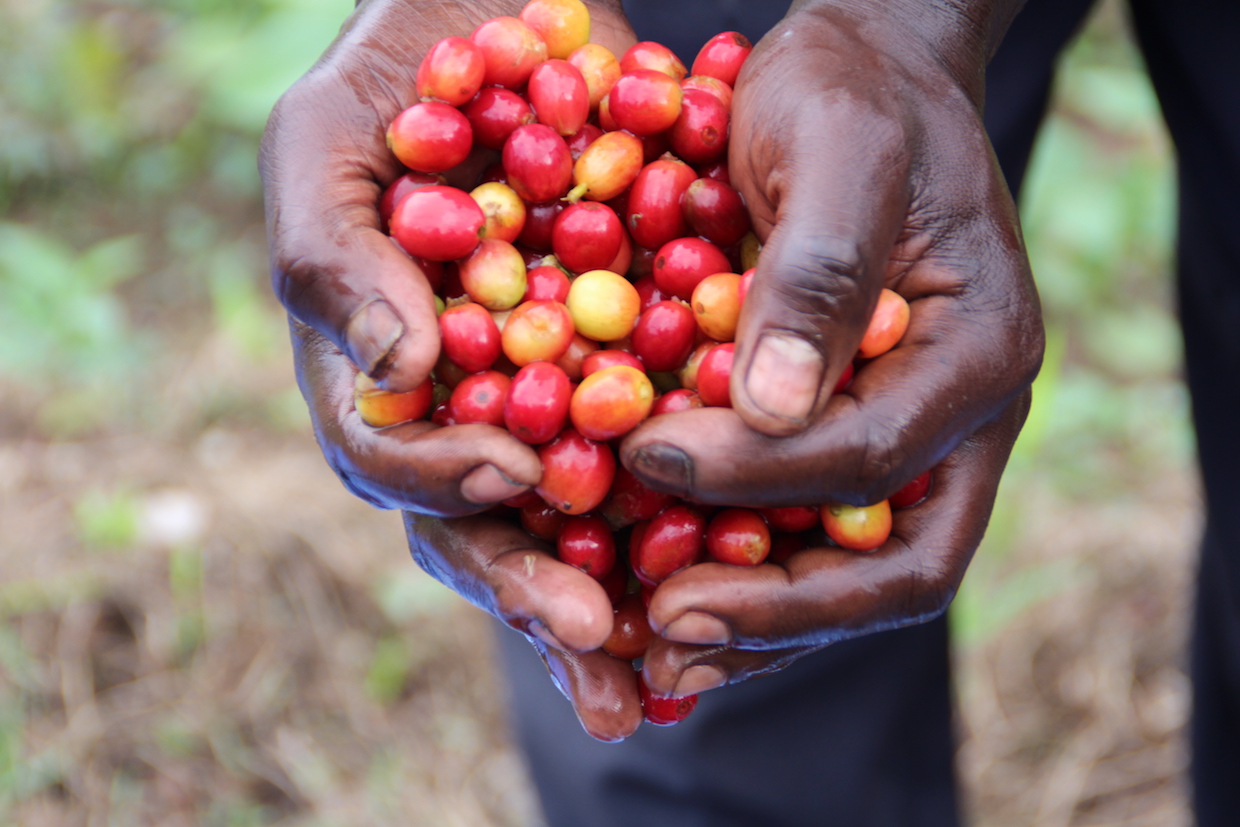 Coffee cherry heading to the CPNCK cooperative on the island of Idjwi in the DRC. All photos courtesy of Ensemble Pour La Différence.

Among the many recent private and public efforts to support the Democratic Republic of Congo coffee sector, one is quite literally on an island.

In the Lake Kivu area provinces where arabica and robusta are commercially grown, production once soared in the 1980s prior to a civil war in 1993, from which civil conflict and political turmoil persisted for decades. In 1989, the DRC produced an estimated 238 million pounds of coffee, according to estimates from the U.S. International Trade Commission. By comparison, in the 2017/18 crop year, the DRC produced 44.8 million pounds, according to International Coffee Association statistics. 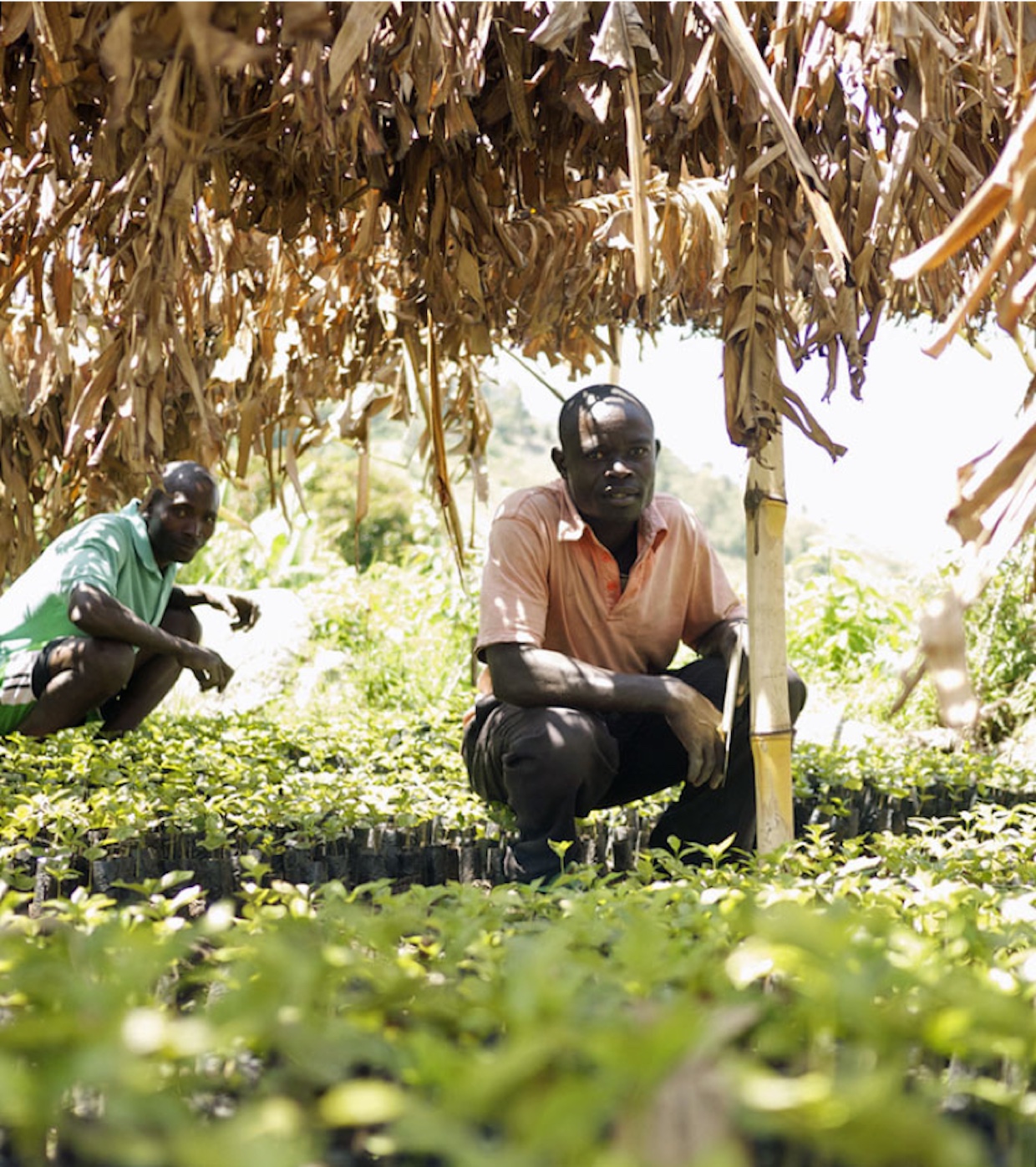 Much of the sector-level focus on DRC coffees in this decade has been on the production of high-quality arabica for premium export markets. Among those parties working to make coffee a sustainable cash crop for DRC coffee farmers is Ensemble Pour La Différence, a social enterprise that’s registered as a cooperative in South Kivu, and as a charity in the UK.

The group recently released some illuminating survey results from its interviews with coffee farmers on the Lake Kivu island of Idjwi, where a remarkable coffee-focused agricultural transformation has been occurring. Because of its remote location, the island has been something of a safe haven from the decades-long Congo conflict, yet that very geographic isolation has also resulted in few trading opportunities, with farmers often selling their crop to buyers in Rwanda by the rickety boatload at much lower prices than they might fetch on the open market, according to Ensemble.

So in 2013, Ensemble partnered with the island’s CPNCK cooperative, providing a loan that in turn led to the first full-container shipment of green coffee off the island. The group has since been facilitating container shipments annually, seeing increases in both production and quality scores. Ensemble now says some CPNCK coffees are being purchased by Starbucks.

Despite the improved market access and demand for the specialty-level coffees, Ensemble’s own interviews with farmers suggested more work is needed before arabica production on the island can be considered a standalone path to prosperity. For example, the average volume that farmers reported selling to CPNCK in 2017 was 480 kilos. However, 58 percent of those farmers estimated that they would need to sell at least 60 kilos to CPNCK to meet the needs of their children.

With these numbers in mind, Ensemble is currently trying to attract support to increase CPNCK shipments from four containers in the most recent crop year to 15 containers.

We recently caught up with Ensemble Pour La Différence Co-Founder Mike Beeston to talk more about the CPNCK partnership, touching on issues of empowerment, scaleability and economic sustainability. 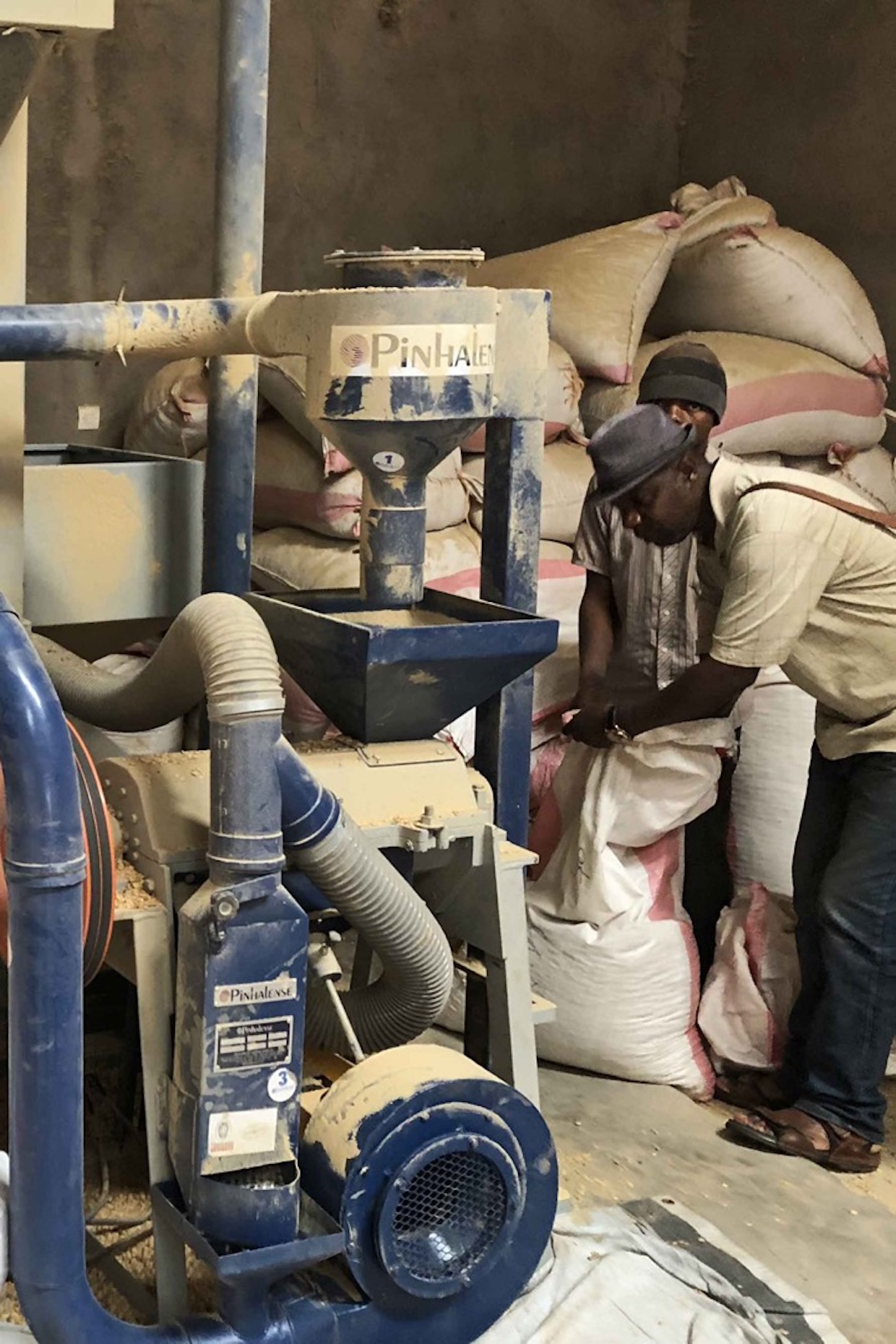 DCN: Is coffee the primary cash crop on the island? For how long has it been commercially produced there?

Mike Beeston: Coffee is currently the primary cash crop on the island. A small quantity of quinine is grown and exported to a pharmaceutical company, and crops such as cassava and fruit are sold in Bukavu and Goma, but the quantity and value is small and insignificant in comparison to coffee.

Coffee was introduced in the 1940s during the colonial period when the Belgians recognized that local strains of Bourbon trees had the capacity to produce excellent coffee and encouraged the Congolese to set up micro plantations. Belgian and German ‘negociants’ bought and exported the coffee to Europe. President Mobuto effectively nationalized the industry, which grew in volume and became Congo’s most important agricultural export, all of which fell apart during the Congolese wars.

What processing and milling facilities does CPNCK currently have, and what are the goals moving forward?

Thanks to a partnership with Rikolto, a Belgian NGO specializing in agronomy, CPNCK has been able to install 19 micro washing stations on the island. The partnership has also enabled the building of a warehouse for triage and storage and the installation of a de-husking machine. Essentially CPNCK is now able to manage a fully integrated process from grower to international buyer.

The fully integrated process means the cooperative can avoid the delays and costs inherent in sending café parche to the de-husking factory in Goma and enables the cooperative to manage the process of quality improvement. The improved operational efficiency and higher quality coffee generates more demand and more income for the island. Most coffee growers simply want a better life for their children. CPNCK gives them that hope. 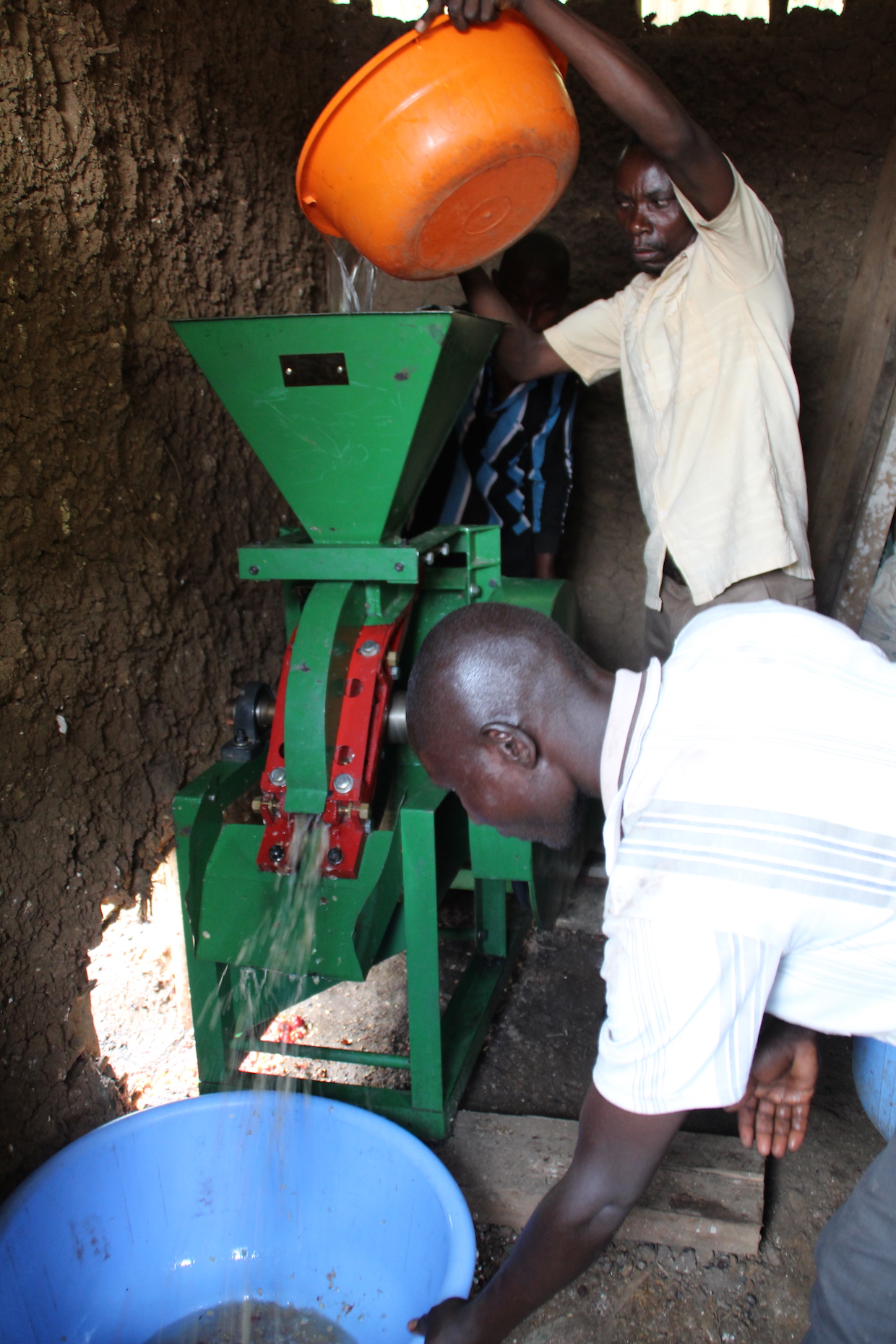 The cooperative washes the coffee cherries at the micro washing stations outside of which it has set up drying platforms. After approximately two weeks the café parche is sent to the de-husking mill and a final process of triage prior to bagging and export.

However, there is a lot of coffee on the island and CPNCK buys only a part, which means a lot of coffee is still sold into the Rwandan market. This coffee tends to be washed by the growers themselves using old hand mills and dried outside on the ground before being taken across the lake to Rwanda.

Can you outline the governance structure of the coop and explain how Ensemble Pour La Différence relates to that?

The cooperative has a management team and an advisory board. It buys washed coffee beans from the micro washing stations, which are managed by CPNCK members living nearby, and then coordinates the de-husking and triage process. The cooperative is responsible for securing contracts with international buyers and organising transporting the café verte either to the DRC border or to Mombassa. It is also responsible for providing agronomy advice to the growers and it has a social responsibility, as much as possible, to support the health and education of their families. 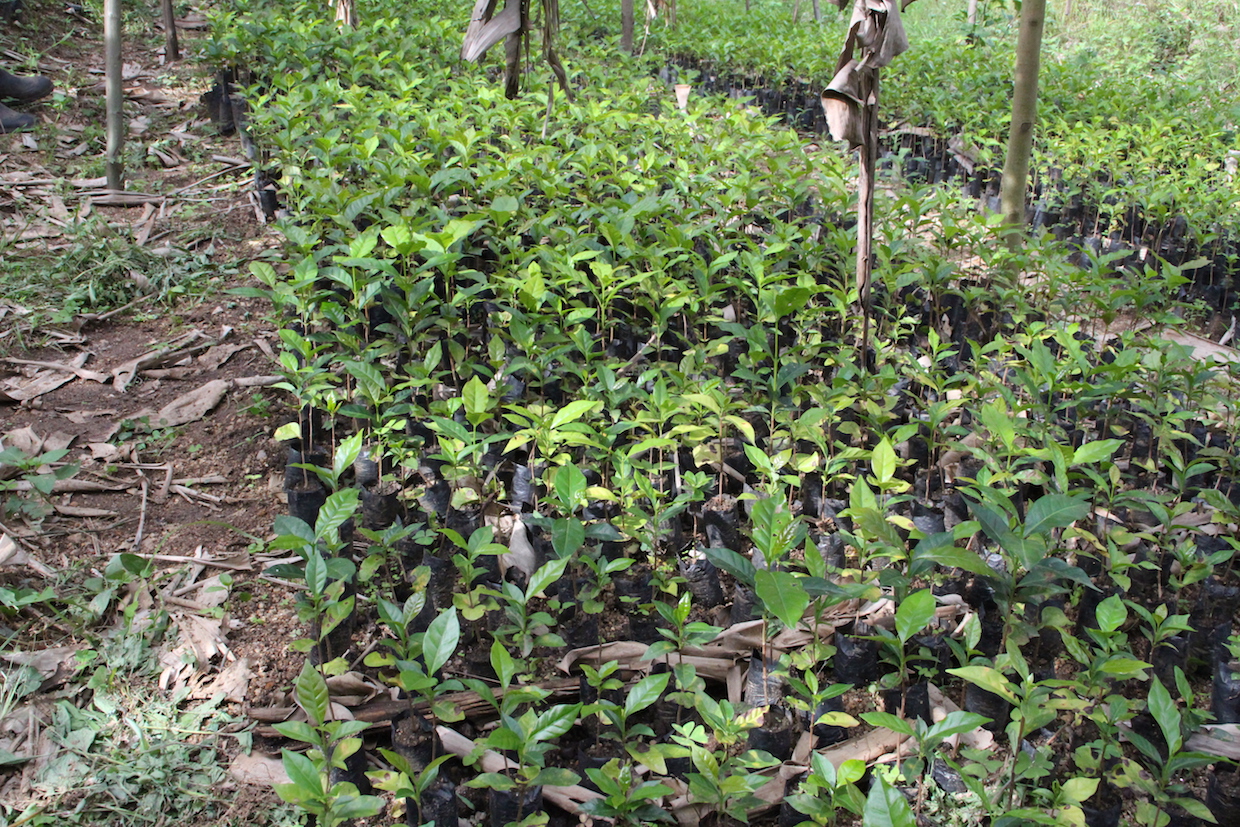 Why in the past has it been more lucrative for farmers to sell in Rwanda?

The industry grew successfully during the 1970s, 80s and early 1990s, by which time it was exporting 120,000 tons per year. The Congolese wars 1996-2002 and the chronic insecurity that followed completely destroyed the export industry. The coffee growers had no choice but to find alternative buyers, which they did by smuggling coffee into neighboring countries where it was absorbed into that country’s coffee industry.

In CPNCK’s case, the growers had to row across Lake Kivu in wooden canoes, a distance of five kilometers to Rwandan shores. The journey took two days and sudden storms frequently caused the boats to capsize. Local people say that 2,000 coffee growers have drowned when crossing the lake to Rwanda. Once on shore the growers had little choice but to sell their coffee at whatever price they could get, often for far less than market prices, before starting the two-day journey back to Idjwi.

Can you describe some particular challenges related to coffee production on an island as opposed to the mainland?

There is no power on the island, which means the micro washing stations and the de-husking machines have to run on a generator, which adds considerably to the costs of production. Transport has to be by pirogue boats, which means that transport away from the island is time consuming and also expensive. Other than that there are no particular issues. 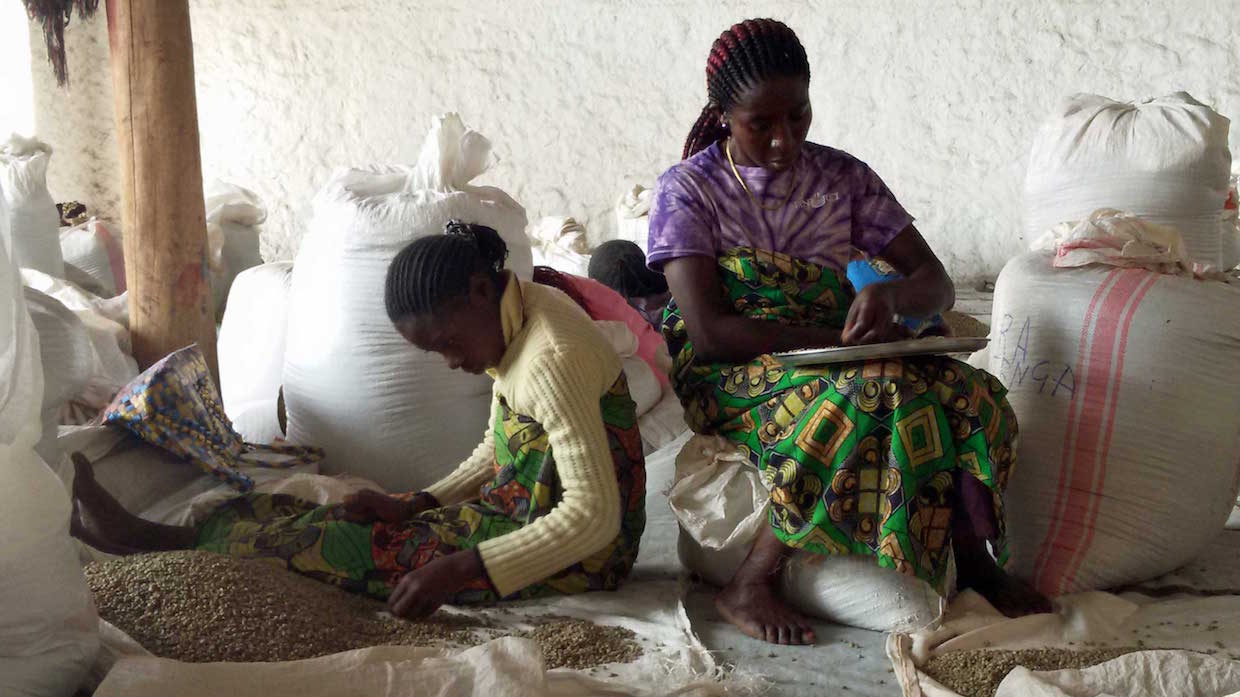 What specific indicators do you have that suggest coffee farming can be a viable long-term solution for these farmers?

The cupping scores are consistently above 85. This year the cooperative will install a cupping lab, which it will use to educate the growers and help them to appreciate quality and use quality as a base for sustainability. With the growing reputation of coffee from Kivu will come increased demand. At the moment CPNCK is exporting only 15 percent of the island’s potential. The combination of high quality and possibility to increase exports makes coffee a viable long-term solution.

How many farmers (approximately) currently sell to CPNCK?

If CPNCK is the only buyer, are there any mechanisms in place to ensure farmers are able to get a reasonable or fair price?

The cooperative sets a buying price that it thinks is fair and initiates the purchase of coffee beans. When the coffee is sold, the cooperative takes a part of the profits to pay for its running costs and distributes the balance back to the growers. In other words, the growers receive a basic payment and then participate in any profits.

The president of CPNCK is very active in building relationships with international buyers and attending events. Additionally, the cooperative has an office in Goma with specific responsibility to engage with buyers, most of whom are either based in or regularly visit the area.