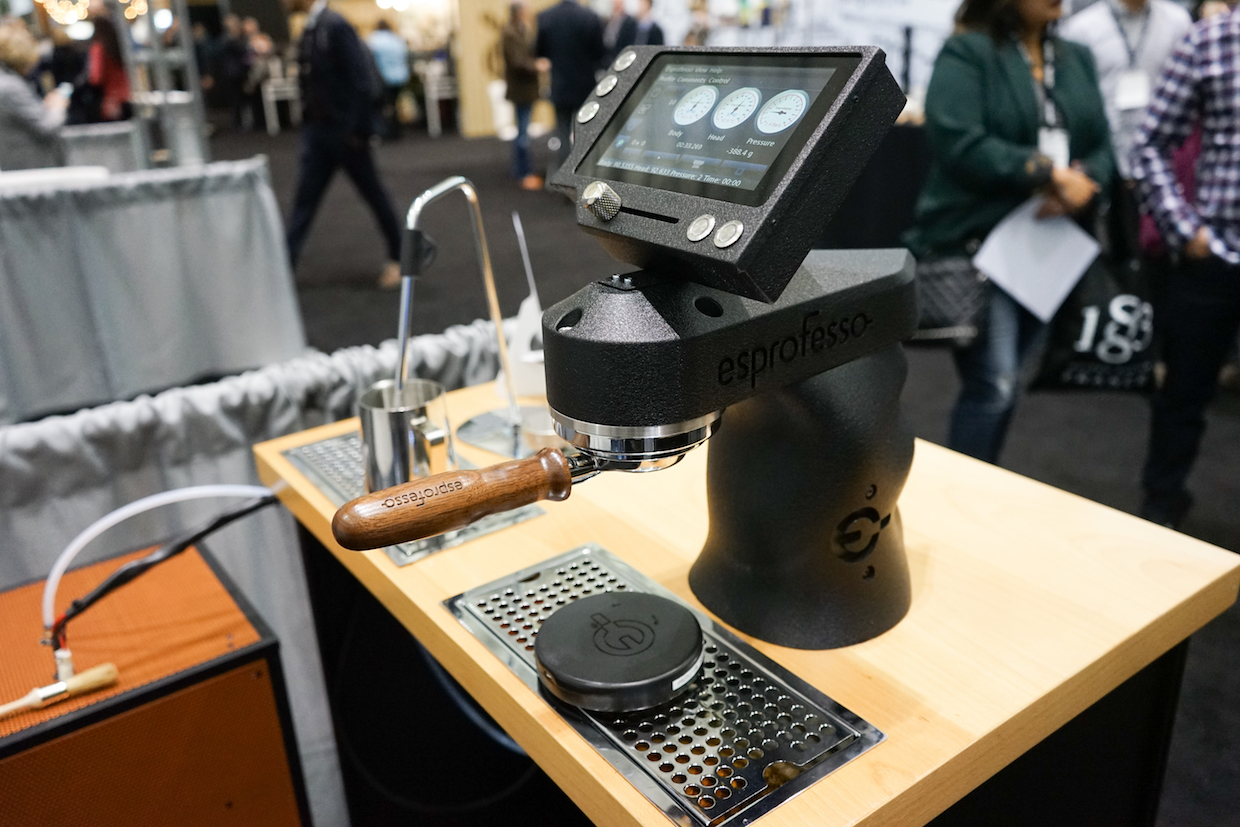 An Esprofesso group on display at the SCA Expo. Daily Coffee News photo by Howard Bryman.

Tijuana, Mexico-based brand Esprofesso launched its first product, a barista-centric under-counter espresso machine, at the SCA Expo in Boston today. Designed and manufactured in Mexico, the Esprofesso machine is the creation of Fabian Sánchez, the 2003 barista champion of Mexico and owner of 16 coffee shops.

“After so many years of waiting for a machine to do what he wanted, he decided to go the drawing board and do his own machine,” Esprofesso Sales Director and Fabian’s brother-in-law Albert Sánchez told Daily Coffee News moments after the machine was introduced to the public. The family company also includes Fabian’s brother, Chief Engineer Germán Sánchez Arreola. 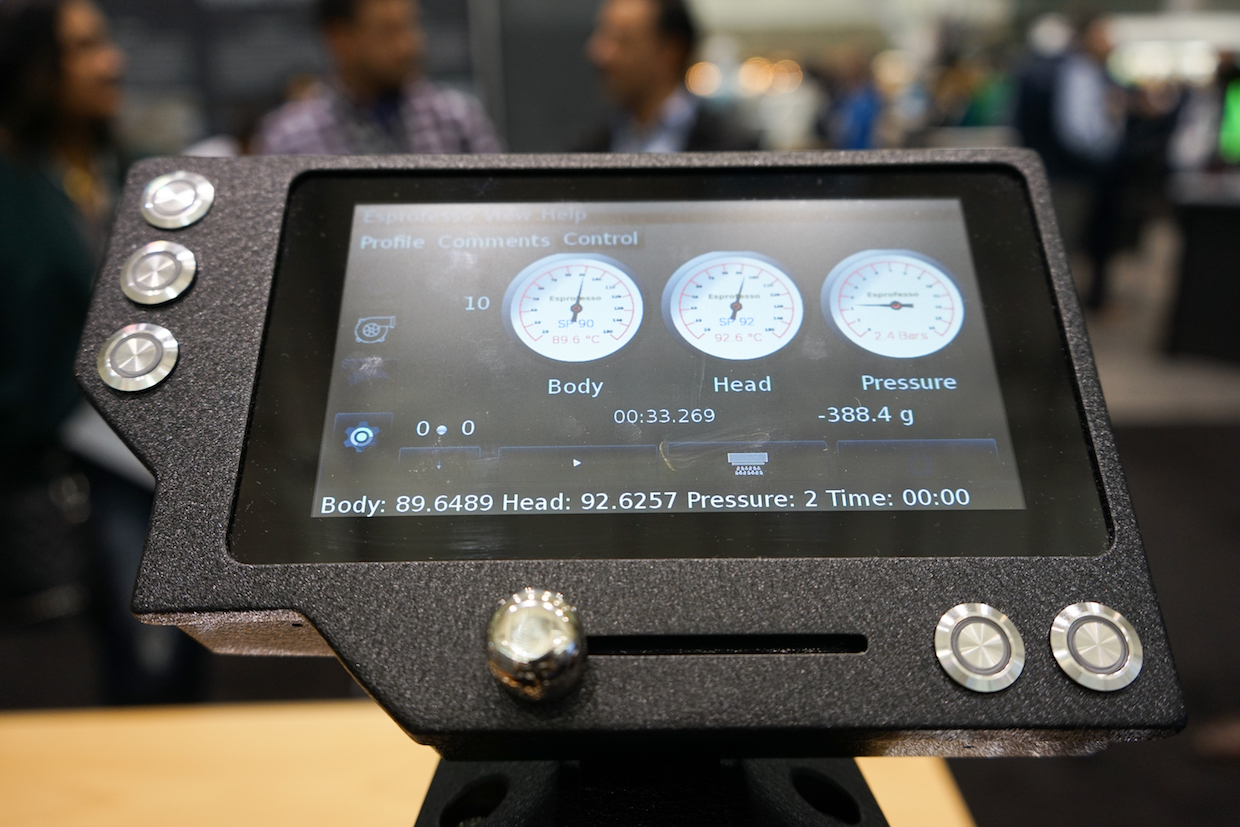 At the bottom of a 7-inch touchscreen interface mounted upon each group, a potentiometer slider allows users to create a water flow profile recorded in real time for repetition, storage and sharing via the cloud. The screen displays the temperature of water in the under-counter body, water at the group, and pressure at the group.

Stored shot profiles can be executed automatically by baristas with a single button of one of five waterproof buttons on the group. Cafe owners can monitor the shot profiles, their usage frequency and other data through a smartphone app. Fresh water is heated first in the under-counter body via heat exchanger through a tank that stores only distilled water, avoiding corrosion and mineral buildup, after which a coil heats the water inside the counter-mounted unit for precision at the group. 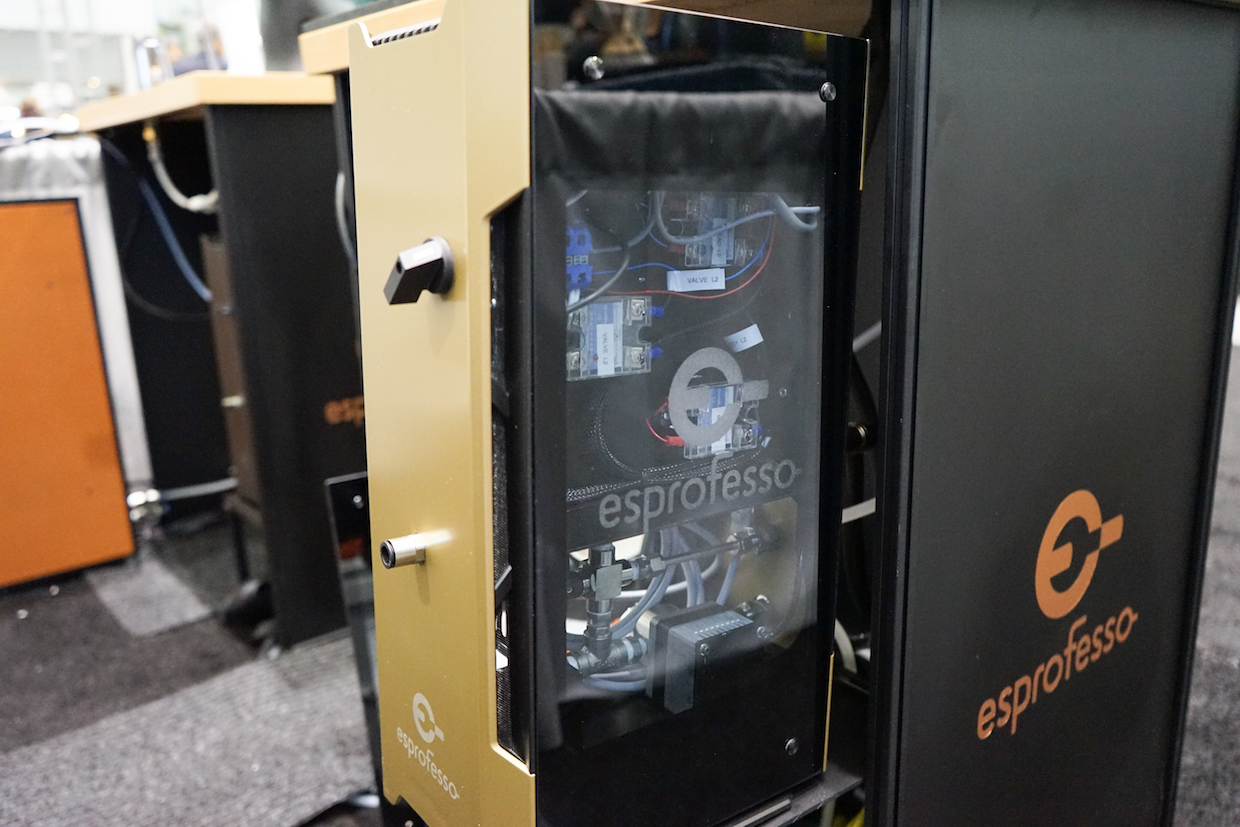 Boilers are made of stainless steel. The aluminum grouphead housing is available anodized, custom powder-coated or chromed. Sánchez said the group assembly maintains about 120 milliliters of water at brewing temperature at a time, which is double the volume needed for a double shot.

The system also includes a wireless bluetooth scale for placement under the group that communicates with the touchscreen computer for incorporating shot weight into the profile. A standalone under-counter steam unit is also available as part of the system. 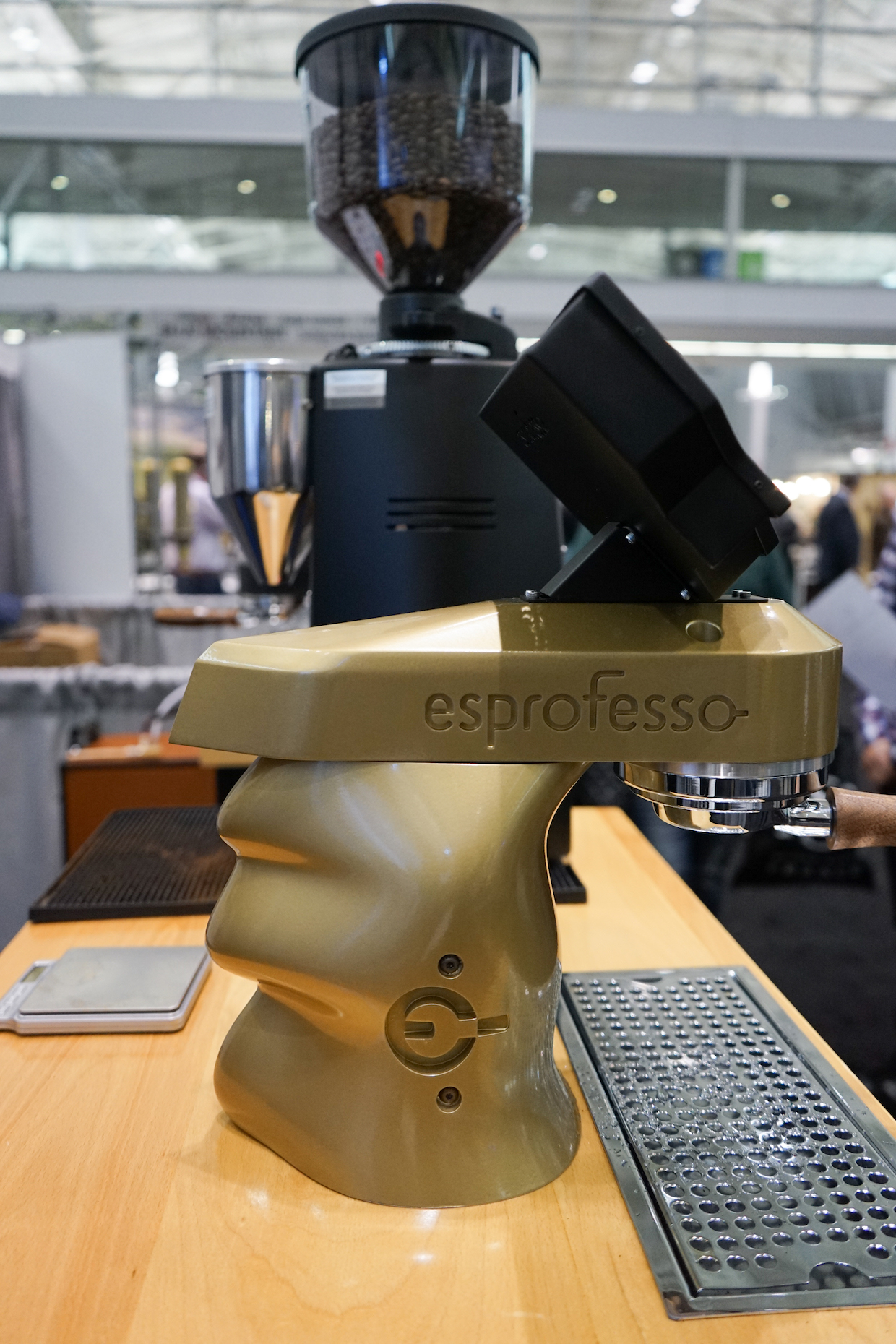 With this machine, Esprofesso aimed for features that offer advantages to both the barista and the shop owner, while also maintaining a striking, modern and distinctly Mexican appearance on the counter and in the cafe. The counter-mounted brewgroup assembly, when viewed from the side, is shaped to resemble the eagle-masked warrior known as Caballero Azteca, according to Sánchez

“It’s a modern design with a little bit of our ancient history,” said Sánchez. 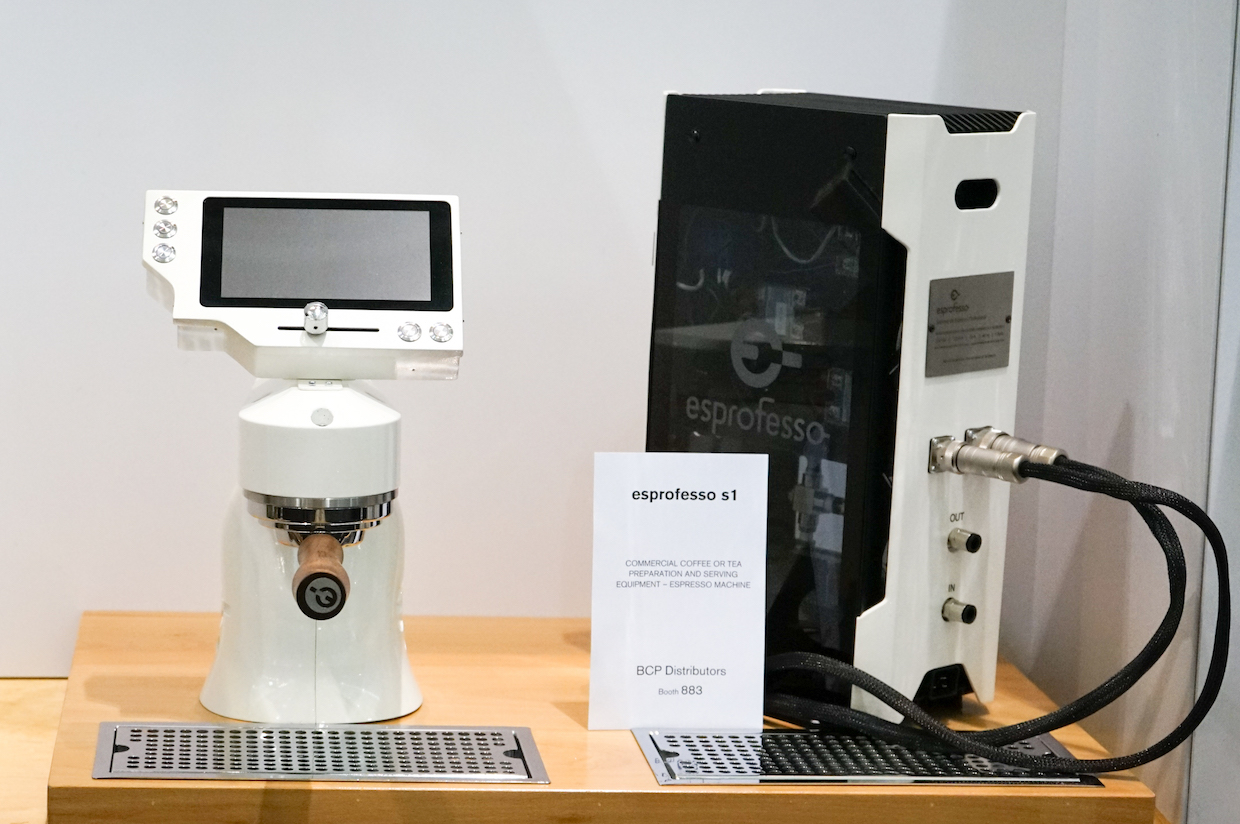 The company, which has offices in San Diego as well as its home based of Tijuana, Mexico, has officially launched sales of the Esprofesso this week and is currently seeking distribution in the U.S. Pricing ranges from US $10,500 for a single grouphead and steam unit combo, up to US $25,000 for a three-group, two-steam set. 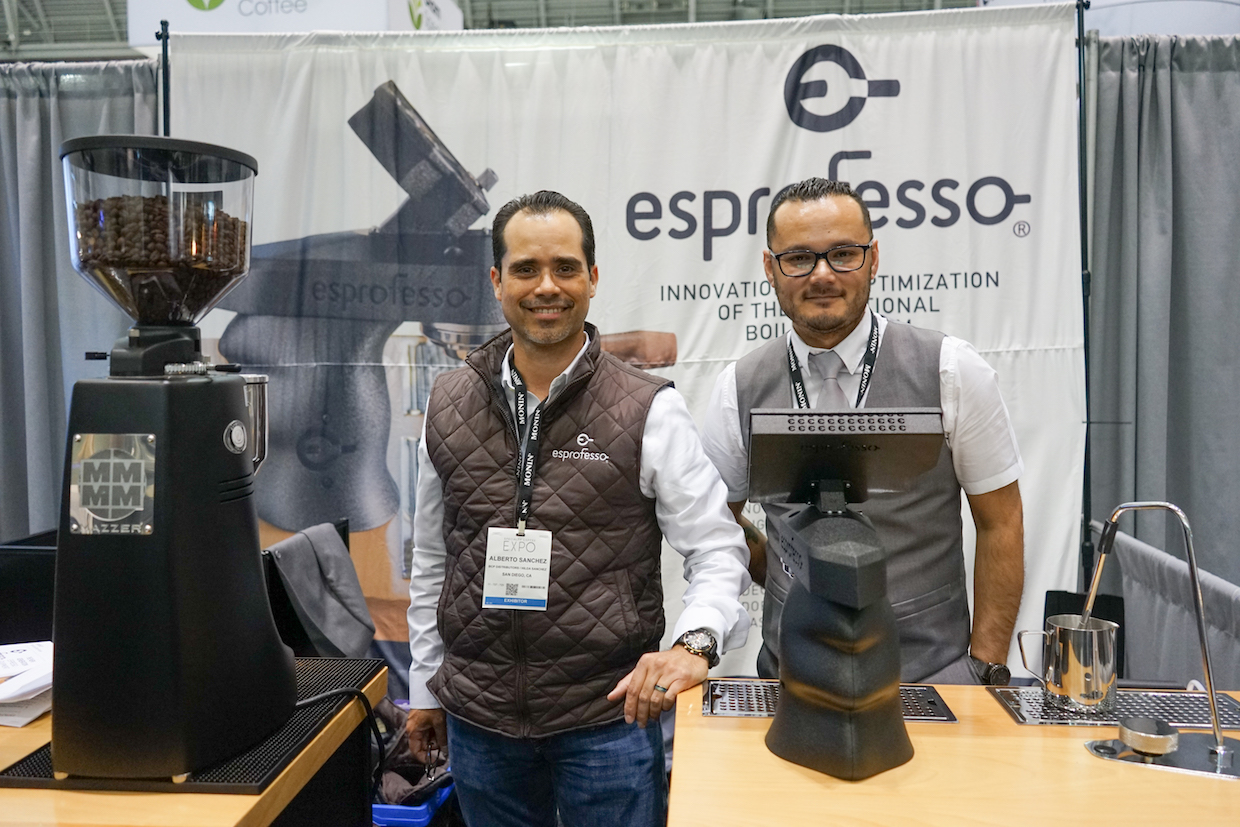 Members of the Esprofesso team at the SCA Expo in Boston. Daily Coffee News photo by Howard Bryman.