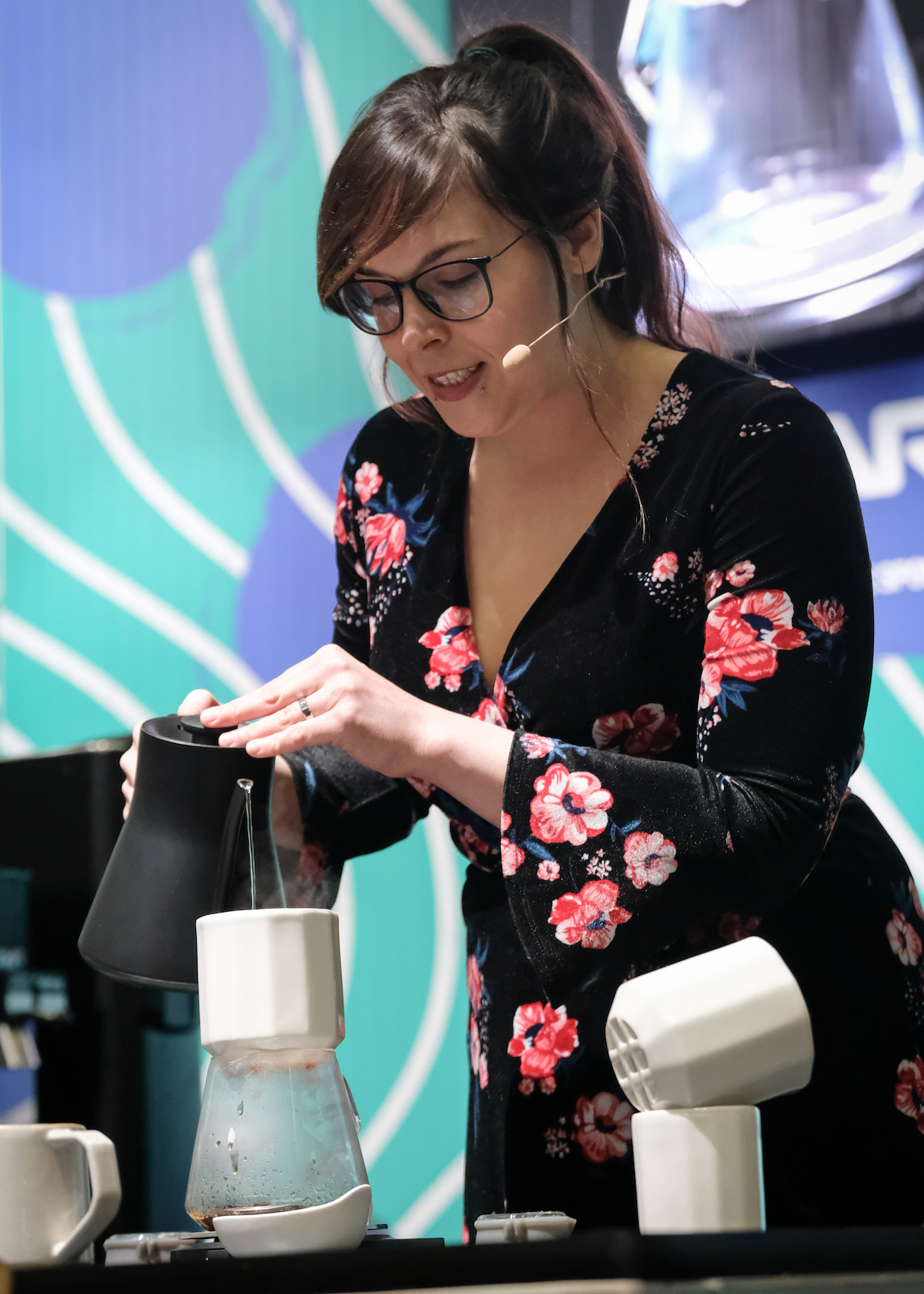 2019 United States Brewers Cup champion Kaley Gann won her title this year with a brewer of her own design called the KG90.

Soon, competitors and casual consumers alike will have an opportunity to develop their own KG90 routines, as Gann has partnered with Kansas City, Missouri-based ceramics manufacturer Convivial Production to put the device into production for retail sales and distribution.

Coffee competitions are, after all, a natural hotbed of innovation, as baristas strive to demonstrate not only a firm grasp of their chosen coffee and of coffee in general, but also a willingness to push the envelope. Yet while new ideas abound relating to processing techniques at origin, brewing parameters and more, when it comes to brewing those cups on stage, baristas often fall back on tried and true tools of the trade. Competing with a unique, original brewer carries its own additional set of potential risks and rewards.

“Innovation is a huge advantage, and I think judges like to see that,” Gann told Daily Coffee News. “I worked really hard on designing and implementing the brewer, so I think that paid off and I was able to show that in my performance.”

However, with limited time on stage, the challenge then becomes finding the most effective balance of talking points between the equipment and the coffee itself.

“Finding enough time to talk about all the reasons for the design was very difficult,” said Gann. “I felt I had almost too much to talk about this year, so maybe I couldn’t present as much information about each topic as I had hoped. Overall, I think I did well with it.”

Gann, who currently works as cafe operations manager for Messenger Coffee, developed the KG90 over a period of about three months following a Brewers Cup qualifying event in Denver. The earliest prototype, made of borosilicate glass with stainless steel wiring at the bottom to support the filter, was “very ugly but functional,” and provided the barista with proof-of-concept as far as her own brewing goals were concerned.

“I then asked female-owned and operated company, Convivial, with whom Messenger already collaborates,” said Gann. “I showed them the design I wanted, and they were able to mold a few brewers with the design. It worked beautifully.” 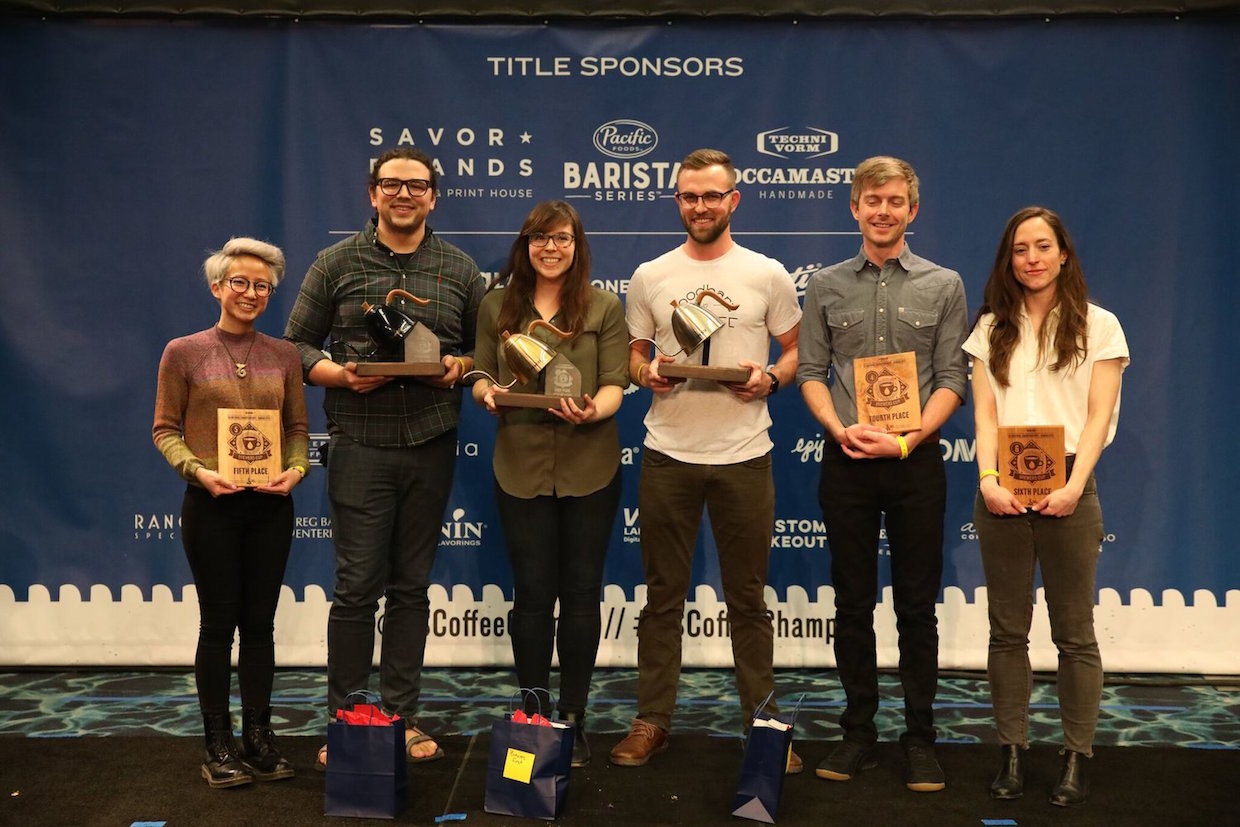 Gann (center) won the 2019 US Brewers Cup with the KG90 after placing third in 2018. Courtesy photo from US Coffee Championships.

The KG90, named simply for its inventor’s initials and the 90-degree angle between the flat bottom and the straight-up inner wall, is also straightforwardly named to reflect its quick, unhindered brew principle. The bottom is completely wide open, no holes or anything else that mitigates flow beyond the grind itself; just the bare minimum of support for a flat-bottom filter. The intent is to amplify flavors and complexity in the cup through a finer grind of coffee, while maintaining fast flow to preserve crispness and clarity and to avoid the muddling or over-extracting that occurs with too much contact time.

The higher extraction yields, boosted flavors and clean cups Gann achieved with the KG90 won her the U.S. title, and though she didn’t make it to the finals of the World Brewers Cup competition in Boston this year, the baristas that did were notably also incorporating similar ideas into their performances and equipment.

2019 World Brewers Cup Champion Jia Ning Du won using flat-bottom filters in Origami drippers that have large holes at the bottom for faster flow. World runner-up Patrik Rolf of Sweden had a brewer of his own design that also features a large hole underneath a flat-bottom paper filter.

The KG90 will offer baristas in cafes and in homes anywhere the chance to put these theories to work in their logical extreme, with the flat bottom paper filter opened as widely as possible. The brewer will be ceramic, a material chosen for its beauty, natural heat insulating properties and non-interference with flavor. The bars at the bottom will also be ceramic.

“The ceramic actually isn’t very fragile on the bottom, which was an initial concern of mine,” said Gann. “The clay, firing, and thick bars keep it structurally sound while still keeping the brewer very open.”

Gann said the KG90 will also likely be the first of what could grow into an extended line of products.

“We are starting small with the brewer, providing some filters, and maybe a cute cup to hold the filters,” said Gann. “We also discussed designing a custom decanter to sell as a set. Convivial already sells some beautiful mugs — I used some as my service vessels for both Nationals and WBC — so any of those could be sold with the brewer. Right now, we will likely just begin with the brewer.”

Gann expects the finished product to launch by this fall. Meanwhile, simultaneous to KG90 development, working at Messenger and prepping for next year’s world championships, Gann is pursuing a variety of side hustles. She’s taking exams this month to become a Certified Personal Trainer; she works for her friend’s vegan taco pop-up called Dead Beet Tacos; and she is training for a half-marathon.

Said the vegan brew-champion inventor, personal trainer, cafe manager and marathoner, “I clearly always like to have something going on.”