Can You Taste the Roasting System? Matching Roasting Profiles on Different Machines 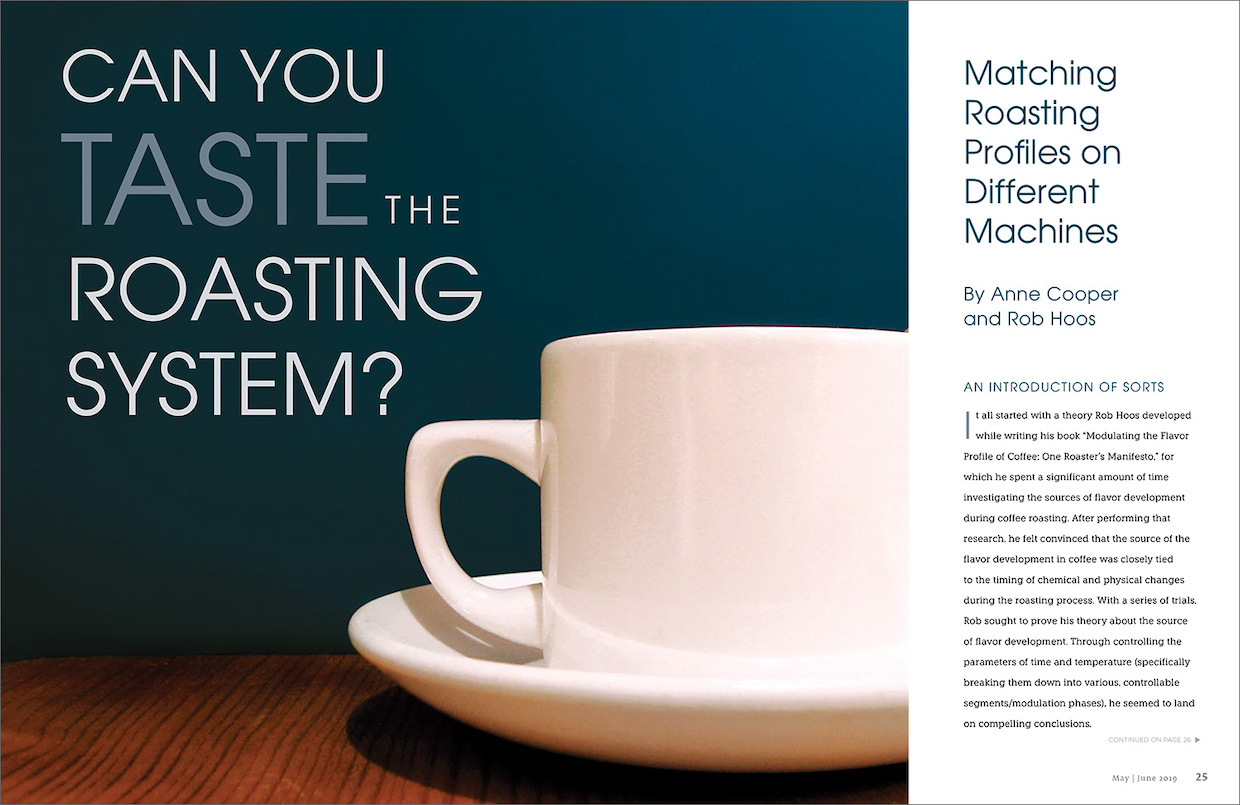 (Editor’s note: The following comes from an article by Anne Cooper and Rob Hoos that appeared in the May/June 2019 issue of Roast Magazine. Click here to read the full article.)

An Introduction of Sorts

It all started with a theory Rob Hoos developed while writing his book “Modulating the Flavor Profile of Coffee: One Roaster’s Manifesto,” for which he spent a significant amount of time investigating the sources of flavor development during coffee roasting. After performing that research, he felt convinced that the source of the flavor development in coffee was closely tied to the timing of chemical and physical changes during the roasting process. With a series of trials, Rob sought to prove his theory about the source of flavor development. Through controlling the parameters of time and temperature (specifically breaking them down into various, controllable segments/modulation phases), he seemed to land on compelling conclusions.

One of the logical conclusions was that many of the noted differences between roasting machines/systems derived from different placement, thickness and types of thermocouples as well as differences in terms of heat transfer controls. Theoretically, the coffee bean was less influenced by these differences that so many roasters, manufacturers and coffee professionals fixate on, and more impacted by the profiling and roasting style of the roaster operator. Provided one could control the roasting system to create a certain timing (in the modulation phases) of chemical and physical changes in the bean during the roasting process, one could then create whatever flavor profile was desired.

Rob started exploring this theory professionally by offering profile-matching services for individuals searching to transition from one type of machine/roasting system to another or from one roaster manufacturer to another. During much of this time, he consistently ran into the same preconceptions, namely that the flavor of a coffee was rooted in the particular machine and not the profile being used. However, for many people, this profile-matching service was an eye-opening experience. In one to two batches, the profile usually could be mimicked so closely that customers came to understand that they need not worry about transitioning between machines and manufacturers. Rob carried on practicing profile matching from 2013 until last year, when a friend, colleague and fellow consultant with a similar roasting mantra offered him an opportunity to share his work with a wider audience.

Anne Cooper, a 25-year veteran of the coffee industry, learned about Rob’s research and contacted him. Anne’s extensive roasting consulting experience on multiple roasting systems around the world, paired with Rob’s work, became the genesis of a new teaching tool for roasters. Anne and Rob worked together to further explore Rob’s concepts and put traditional claims on flavor development (that the machine influences the flavor) to the test. Using their knowledge and experience, the pair developed a workshop — Can You Taste the Roasting System (CYTTRS) — for the Specialty Coffee Association (SCA)’s Coffee Roasters Guild.

The two planned to do a beta test at Firestarter — a yearly workshop event hosted by Anne held before Melbourne International Coffee Expo (MICE) — before formally unveiling the course at the 2018 Specialty Coffee Expo in Seattle. This article is meant to explore the concepts addressed in the CYTTRS workshop and the experiences the authors had putting coffee professionals around the world to the test. 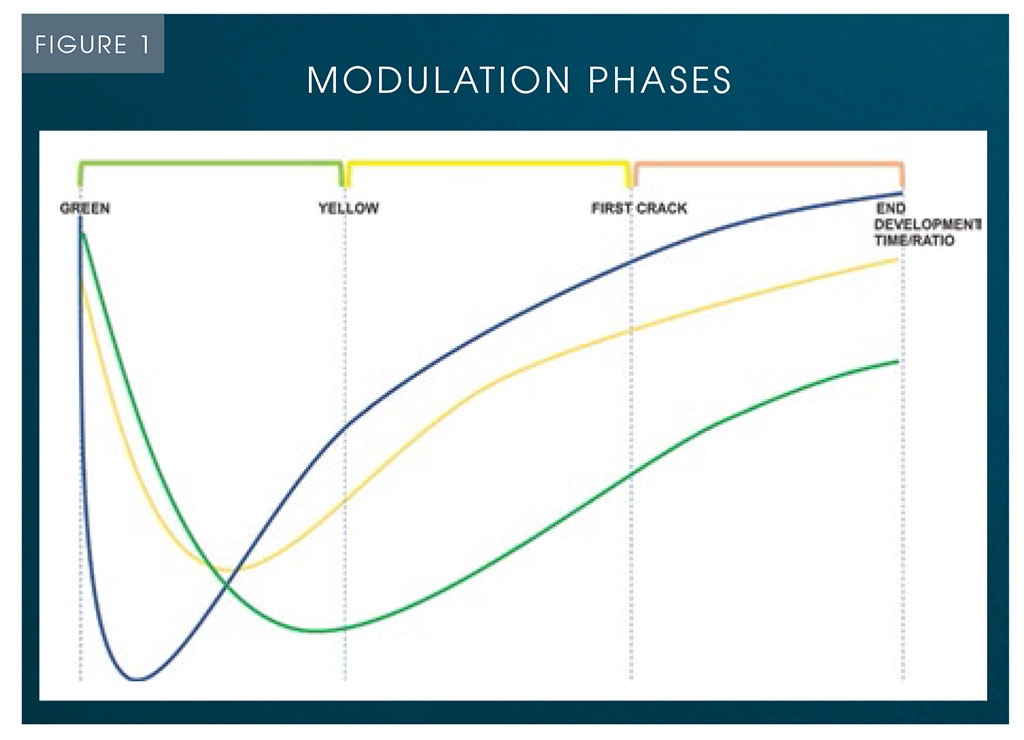 The focus of this research was to explore whether coffee professionals would be able to taste the difference (via triangulation) between the same coffee roasted on three different roasting systems/machines, assuming that the roast, on all roasting systems, ended with the same whole bean and ground color, while matching the time at yellowing, time of first crack and end development time/ratio. If no difference could be detected, then this should demonstrate that the development of flavor during coffee roasting is the result of matching the modulation phases in the roasting profile (see Figure 1, above), and not machine-specific heat transfer mechanisms as per current community claims and legacy beliefs.

By way of definitions, let’s unpack this a little bit.

Triangulation is a style of tasting where the taster is presented with a triangle of three cups of coffee. In the triangle, two cups are the same, and one is different. The goal of the taster is merely to find the cup that is different from the other two. Random chance would suggest that 33.33 percent of the time, tasters can find the “off/different” cup.

The elements of the roast profile, which Anne and Rob were targeting, start with the whole bean and ground color of the coffee. Whole bean color is the color of the exterior of the roasted coffee seed as defined by a colorimeter (handheld Javalytics, Lighttells and ColorTrack were used by Anne and Rob for their experiments). Ground color is similarly the color of the ground coffee as read by a colorimeter. To ensure a homogenous reading of the ground coffee, promote uniformity and expose maximum surface area of the inner parts of the bean, a fine grind setting was used to ensure that the grind particle distribution and sieve size were not impacting results, and only one grinder was used.

Yellowing is defined as the time when the batch (as viewed by the trier) is roughly 70 percent yellowish in color, and very little or no green color is remaining (and the coffee has not begun to brown yet). Yellowing is often used to signal the beginning of the Maillard reaction, though the brown pigment being visible would suggest that the Maillard reaction has begun a little beforehand.

First crack is designated by the smell of vinegar and/or audible popping of the coffee as it swells and releases water vapor pressure.

Development time/ratio is defined as the time from first crack to the end of the roast (in relation to the rest of the roast).

The goal is to match the timing of the modulation phases of these chemical and physical indicators, as well as the end color of the roasted coffee. Temperature is not used as a measurement in this experiment, as thermocouple readings between machines are not consistent. (For further explanation, see the article “Our World Through a Keyhole: Understanding the Limitations of Thermocouple Readings” in the September/October 2017 issue of Roast.)

For our pilot project, we chose three roasting machines/systems that, as conventional roaster wisdom/community claims on the subject would suggest, are considered completely different in terms of the flavors they may produce.

To begin, we used a Probat UG15 (also the control), Loring S35 and a Diedrich IR-5. On each machine, we matched the timing of the above-mentioned events (green to yellow, yellow to first crack, and first crack to end development time/ratio) as well as the end color (whole bean and ground with an allowable variance of +/- 3) and then submitted them to tasting by triangulation to the specialty coffee community. 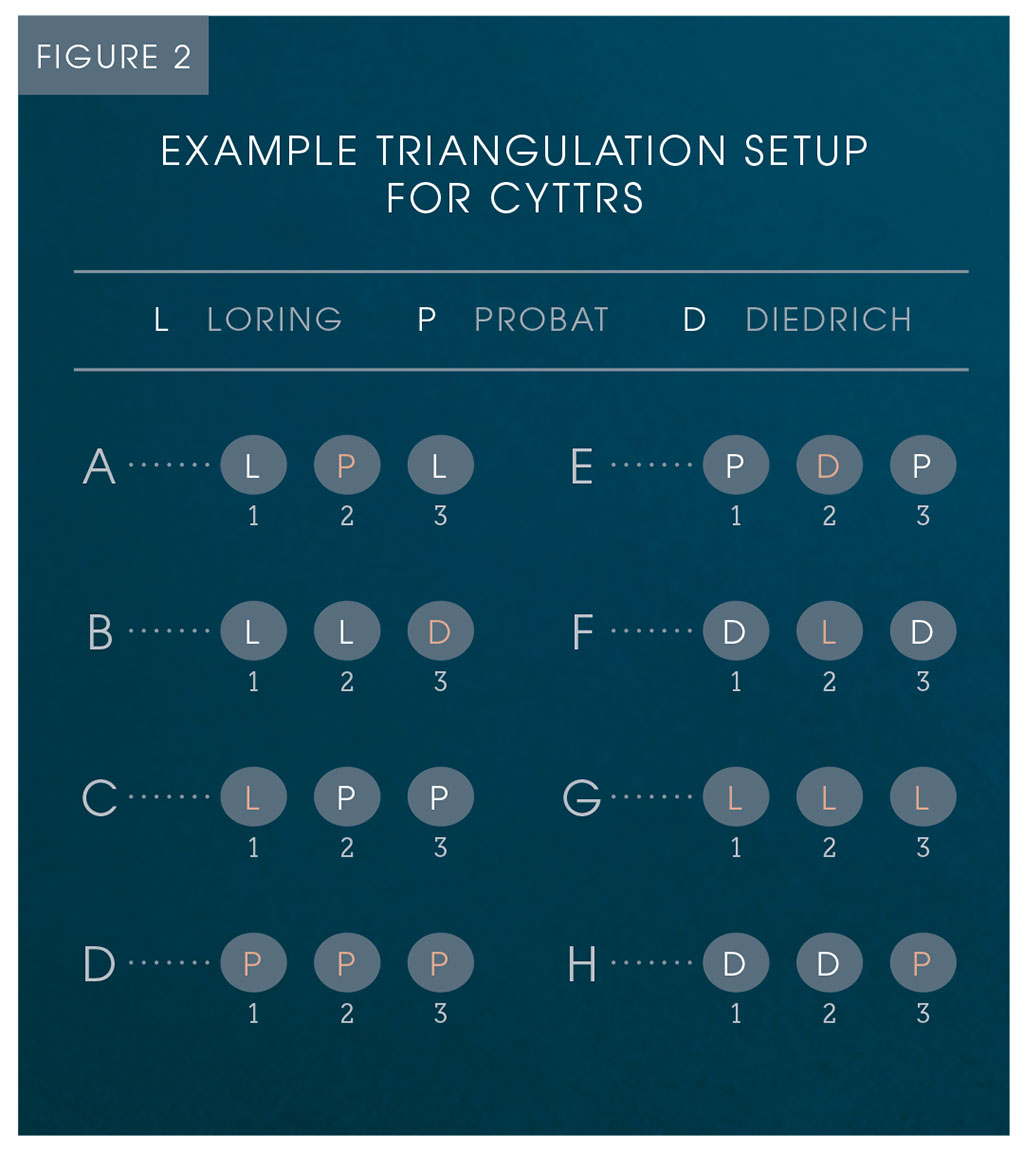 ANNE COOPER is an Australian roaster with 25 years of experience in the coffee industry. A former member of the Roasters Guild Executive Council and Education Committee, Anne now works with her training and consulting company, Equilibrium Master Roasters. She endeavors to educate and inspire current and future flamekeepers with her extensive roasting skills and knowledge, gained through working with small- and large-scale roasting companies on a wide range of roasting machines, and various roasting processes and techniques.

ROB HOOS is director of coffee at Nossa Familia Coffee in Portland, Oregon. He is the lead consultant for Rob Hoos Coffee Consulting and author of Modulating the Flavor Profile of Coffee: One Roaster’s Manifesto. Hoos is a former member of the Roasters Guild Executive Council and a specialized lead instructor, subject matter expert and content contributor for the SCA.

I don’t know Anne, but I DO know Rob, and he is light years ahead of probably anywhere I’ll ever be. Having been exposed to his thinking, I began to suspect it would be possible to take a hand-graphed profile (the results of which were excellent on a specific coffee) done on a hand-controlled gas fired drum roaster, and “translate” it to the ADR system on a SonoFresco roaster. It took a bit, partly because the SonoFresco does not have a real time temperature readout (though one can call up a spot temp at will, but this is clunky to do). However, one DOES have that big glass bowl for watching the coffee as it changes colour, gets lighter and thus dances higher, and the sounds are also “right there”. After some trial and guessing, I began to get good results, and now have preset profiles and batch weights for most of my better coffees on the SonoFresco. Sure beats roasting by hand on the drum machine when I need somecoffee quickly and don’t have the time. It can also be used to set up a remote location with a programmed SonoFresco such that anyone can weigh the green, call up the two-figure profile, punch GO, come back in twenty minutes and have it done properly and consistently.

Once I land on the properly “translated” curve for the SonoFresco I cannot tell the difference in flavour.. and I like to think I have a fairly accurate palate.