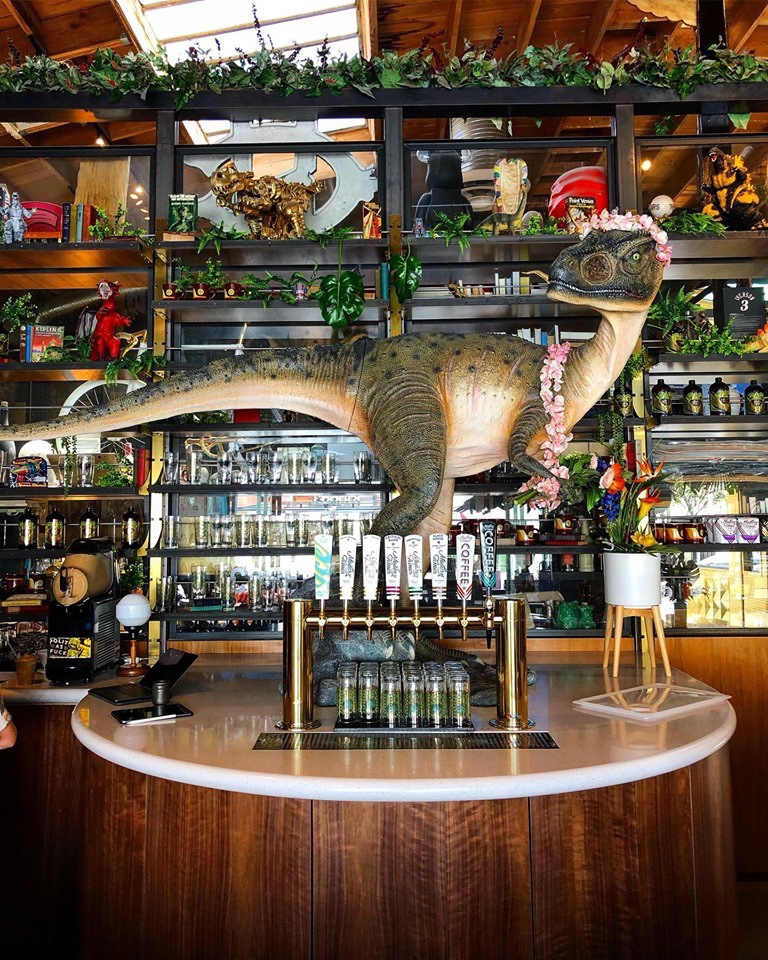 San Diego beer brewing and coffee roasting company Modern Times has always had a flair for fun and immersive interior design. One of the newest examples of this is a life-size velociraptor glaring down over the row of Modern Times tap handles at the company’s latest collaborative venture, The Invigatorium coffee house and beer bar.

In San Diego’s East Village neighborhood, the Invigatorium is the 13th unique concept brought to life by the San Diego creative hospitality company Consortium Holdings, which is no slouch itself when it comes to extravagant interiors. While Consortium is staffing and operating the Invigatorium, the coffee, beer and events on site are pure Modern Times. 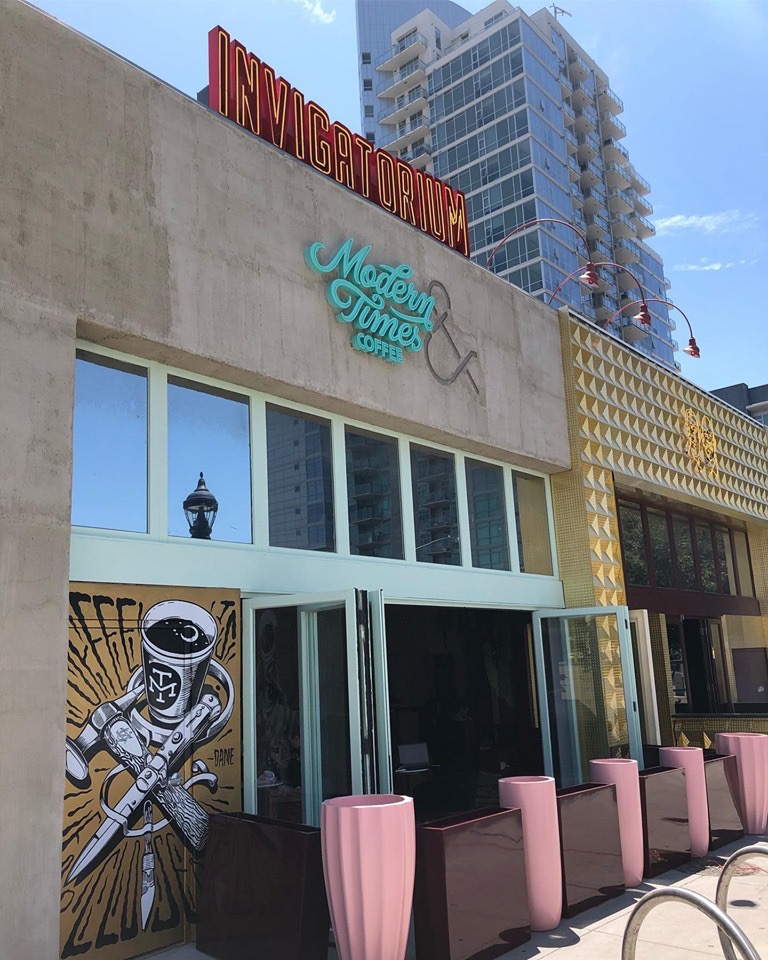 The Invigatorium at 9th Ave. and Market St. in in San Diego’s East Village neighborhood. Photo courtesy of Modern Times.

Apart from the quality of coffee and beer being served, patrons familiar with Modern Times’ original brewery will notice another dead MT giveaway: a huge mural comprised entirely of Post-It notes, this time depicting a fire-breathing dragon. 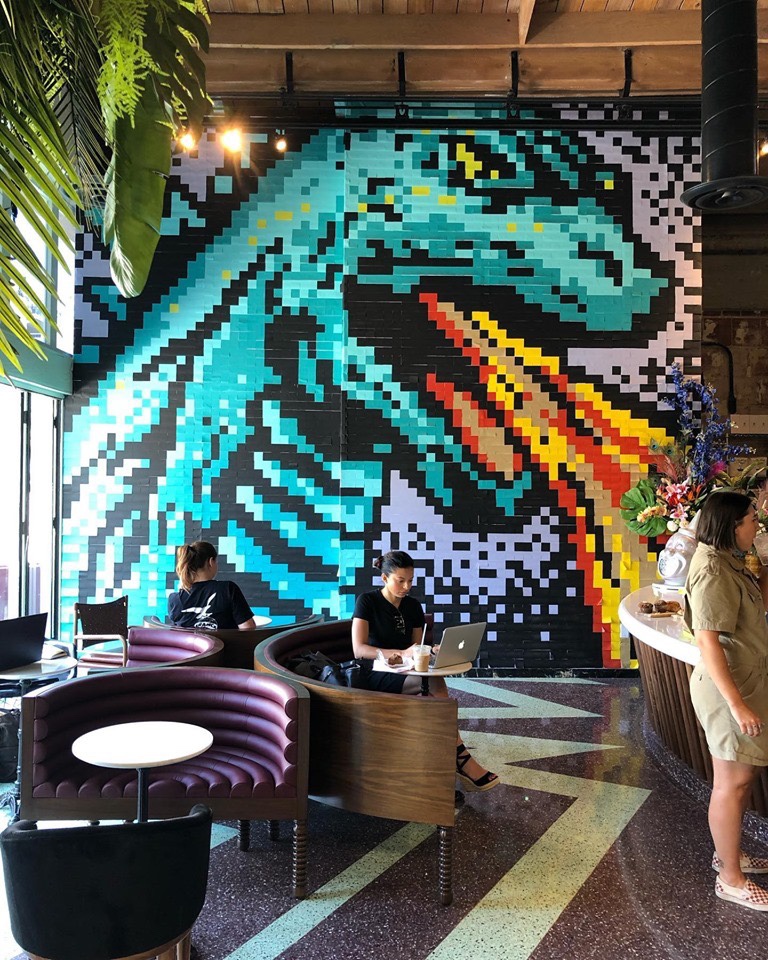 The vivid lizard-green and warm flame colors of the Post-It wall also play into the lush, tiki-esque vibe throughout the rest of space, which is furnished and constructed with mid-century modern pieces and accents. Ferns and palms abound; the counter is fronted with vertical bamboo bars; and yet some semicircular booths and other flourishes yield a classy lounge atmosphere.

“Generally, our aesthetic is maximalist DIY funhouse, and Consortium’s aesthetic is tasteful luxury maximalism,” said Reed. “We kind of ended up with the best of both worlds in this space. Because there was very little organized collaboration on the space, we were both able to build on one another’s ideas, rather than trying to convince the other to meet in the middle on individual pieces. It led us both into a really interesting conglomeration of styles, making it hard to put your finger on exactly what makes this space extra unique. It’s like trying to figure out the secret ingredient in a particularly great batch of spaghetti sauce.” 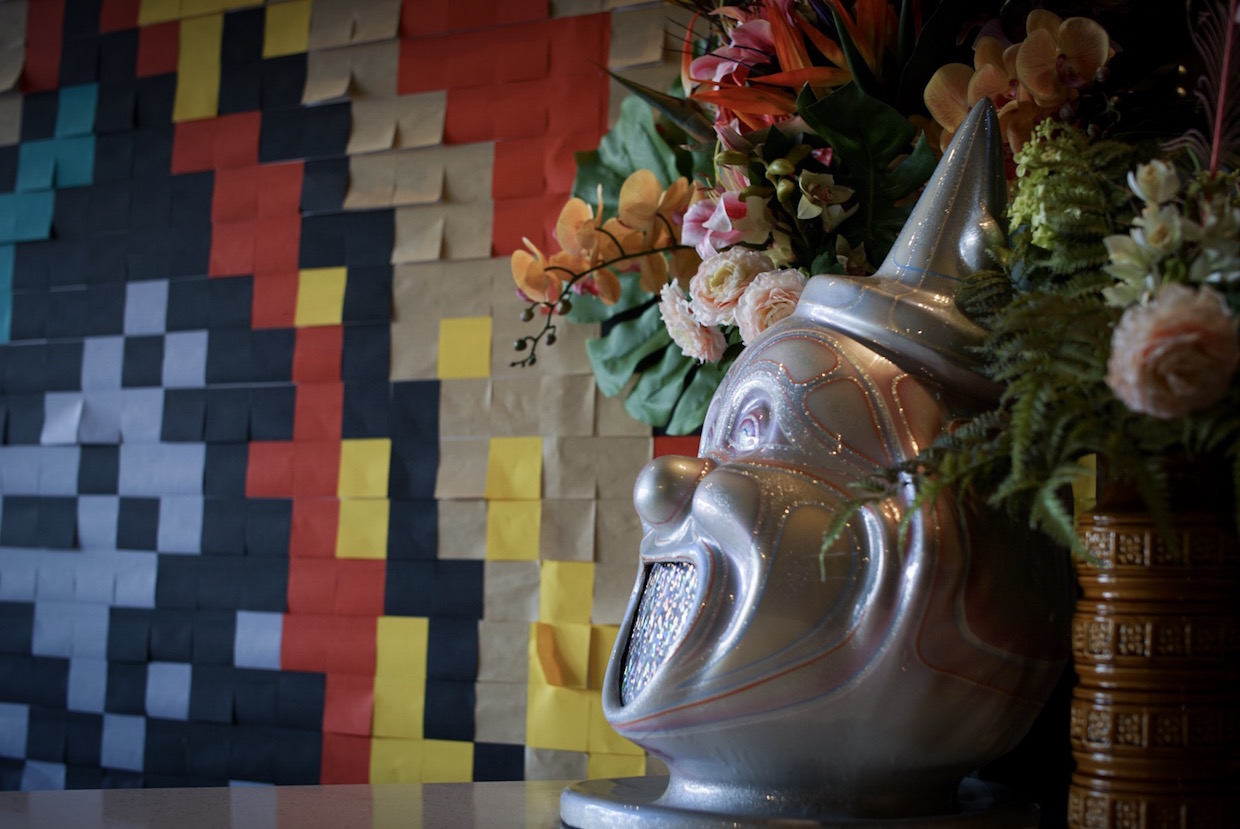 Using the same shiny brass as the Invigatorium’s exterior facade, Modern Times customized its own Synesso 3-group espresso machine exterior, adding visual pizzazz to support a menu with plenty pizzazz all its own. In addition to a full range of traditional drip and espresso offerings, patrons can also choose the horchata slushie, featuring a base of cold brew mixed with almond milk and a sweet cinnamon vanilla syrup. A shot of barrel-aged espresso can be sunk into a cold brew for the house take on the Boilermaker.

“That’s exclusive to the Invigatorium,” Reed said of the Boilermaker. “There will definitely be more wildly inventive coffee drinks coming down the line in the near future.”

Other activities on deck for Modern Times include what Reed described as “a major expansion” to its Portland, Oregon outpost, the Belmont Fermentorium, including a bigger kitchen, more tasting room space and a swanky rooftop lounge slated for completion by the fall. 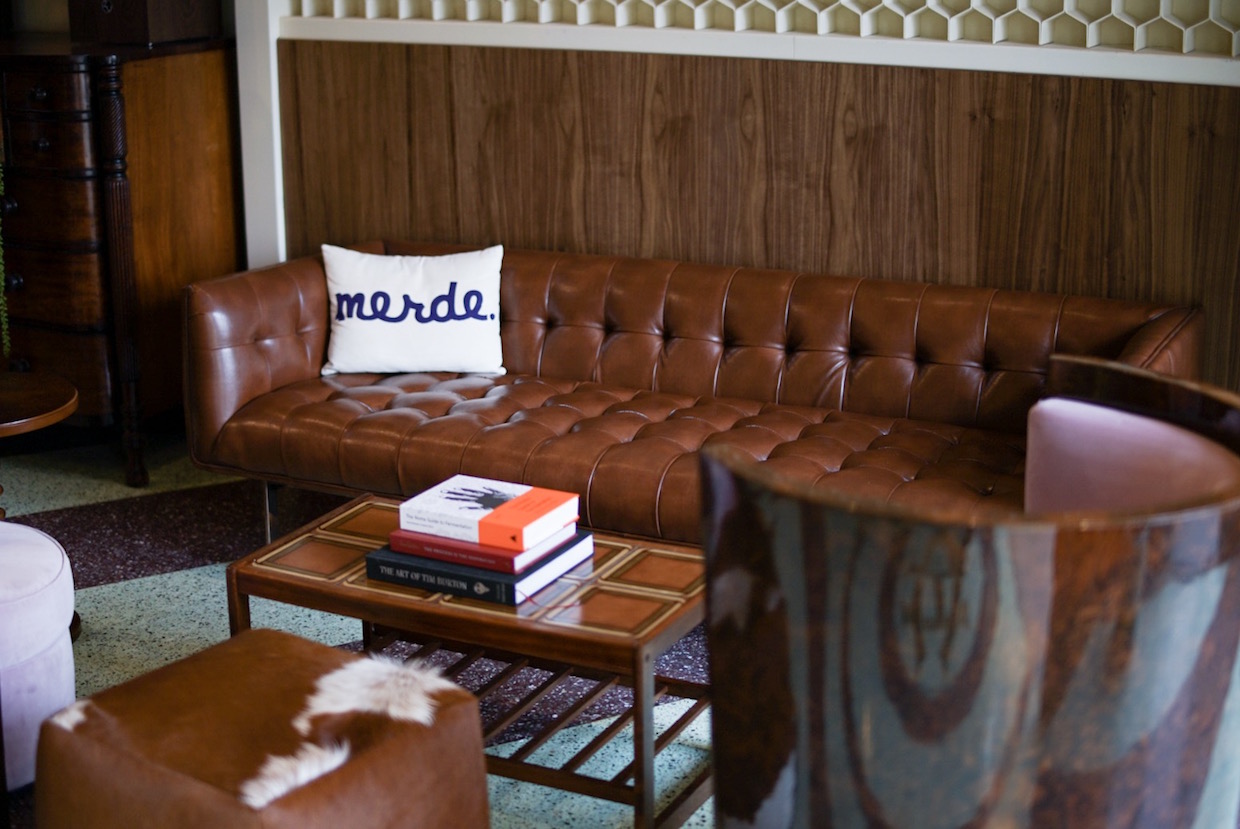 Said Reed, “On the heels of that will be our new Oakland tasting room, and construction on Leisuretown — our Anaheim mega-plex which will include a brewery, restaurant, swimming pool, and tons of rad new art — is well underway.”

The Invigatorium is now open at 631 9th Ave in San Diego.