Mekong Coffee Growers Struggle with Drought and a Warming Climate 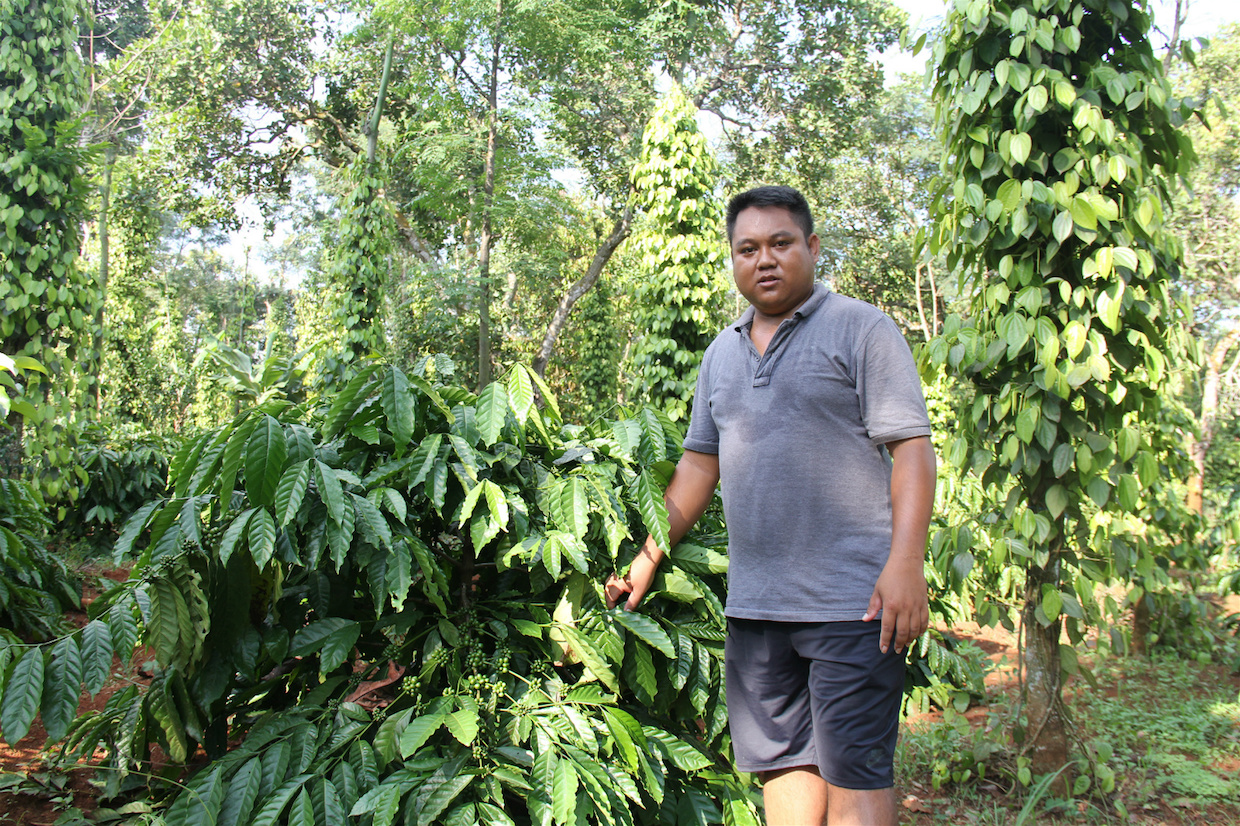 Drought aggravated by climate change is hurting coffee growers in the Mekong region, and intensive farming techniques are part of the problem.

In villages around the city of Buon Ma Thuot, Vietnamese farmers wait for the monsoon that normally arrives in April or May.

“The fruits look ripe outside, but the bean is crispy and small because there was not enough rain,” says 28-year-old Y Bel Eban from Krong village, pointing to some small green beans in his hand.

Eban said there were only three 30-minute downpours this spring. These were no good for the coffee plants, which need water every 15 to 20 days. Many plants died, hurting local farmers who depend on coffee to make a living.

Buon Ma Thuot is the largest city in the “coffee kingdom” of Vietnam’s central highlands. Ninety-five percent of the country’s coffee is produced in this area, helping to make Vietnam the world’s second-largest coffee exporter after Brazil.

A few kilometres away from Buon Ma Thuot, a major tributary of the Mekong, the Srepock River flows from the central highlands into northeastern Cambodia. On its journey through six Asian countries, the Mekong provides livelihoods for at least 60 million people.

Yet severe drought in the region of the lower Mekong basin, which encompasses Vietnam, Cambodia, Laos, Myanmar, Thailand and southwestern China, has pushed the river to its lowest level in a century.

As the world warms, farmers will experience events like this more often. How they grow coffee will have its own part to play, with intensive farming potentially leading to soil depletion and deforestation. 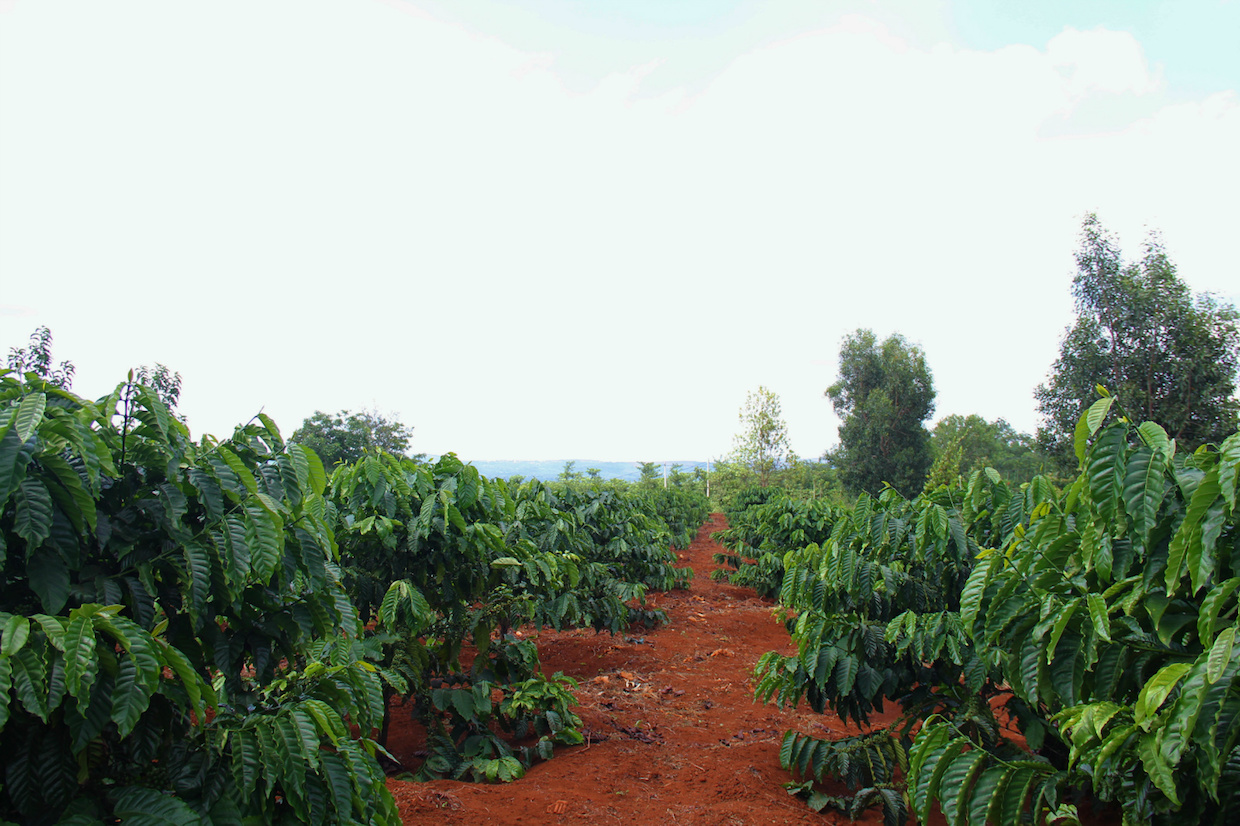 “In the past, rains arrived earlier and on time and the weather was more predictable,” said Eban. “But in the past few years, the weather has been exceptionally harsh.”

Drought has been a constant burden for Vietnam’s coffee-growing provinces in recent years. In 2016, it caused a state of emergency in the central and southern regions of the country.

Coffee growing itself can worsen the problem of water scarcity. In 2018, Vietnam grew coffee across 688,400 hectares, yielding over 1.6 million tons of beans. With so many plantations in need of water for irrigation in the central highlands — and unpredictable weather limiting rainfall — ponds, lakes and groundwater have been drying out. To maintain basic irrigation, local farmers are having to dig wells deeper and deeper.

Associate Professor Dr. Le Anh Tuan of the University of Can Tho, a leading expert on climate change in the Mekong delta, said that recent droughts in the region show signs of being affected by climate change.

“They have become more frequent than in the past and… they often take extreme forms in the region,” he said.

Across the lower Mekong basin, temperatures have risen by between 0.5 to 1.5 ºC in the past 50 years and continue to rise, according to the WWF. The onset of monsoon rains may be getting less reliable, and “these trends are very likely to accelerate and intensify in coming decades as the rate of climate change increases,” Dr. Tuan explained. 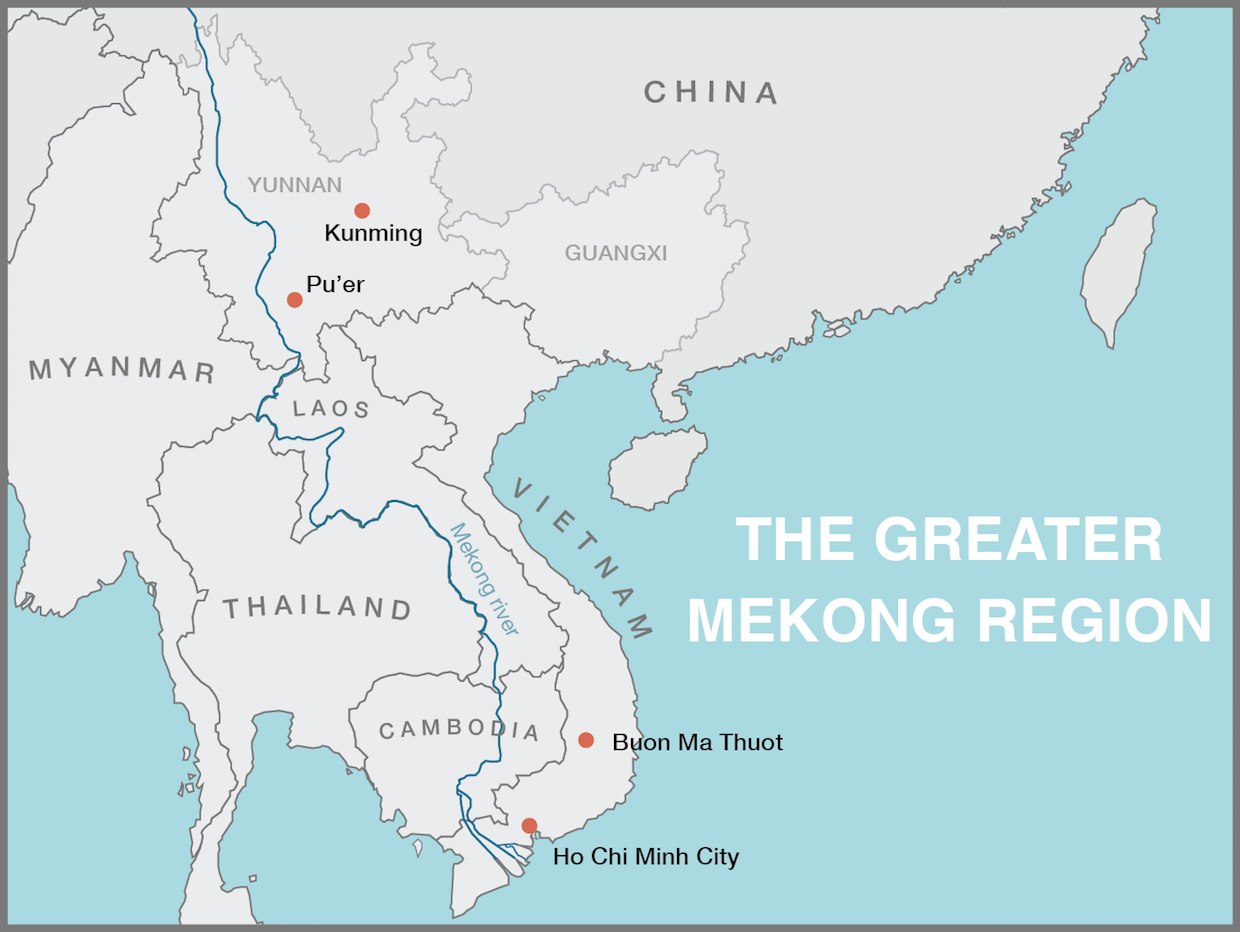 Land changes, such as deforestation and desertification, also contribute to extreme weather events. “Climate Change and Land,” a recent report by an intergovernmental body of scientists convened by the United Nations, shows how such changes can increase the intensity and duration of extreme heat and rainfall, sometimes in areas hundreds of kilometers away.

Because plants return water to the atmosphere by evaporation and transpiration — a process known as evapotranspiration — “changes in forest cover directly affect regional surface temperatures,” the report notes. “Increased evapotranspiration can result in cooler days during the growing season and can reduce the amplitude of heat-related events.”

More than a thousand kilometers up the Mekong from Buon Ma Thuot, the coffee farmers of Yunnan province have also been feeling the heat.

In this Chinese stretch of the Mekong (where it is known as the Lancang), Li Yemei grows coffee near her village of Dakaihe.

She points to the dry leaves of her crop and explains that she will lose money this year.

“Many coffee trees have died from drought,” Li says. “The coffee didn’t blossom fully, and the fruits didn’t grow.” 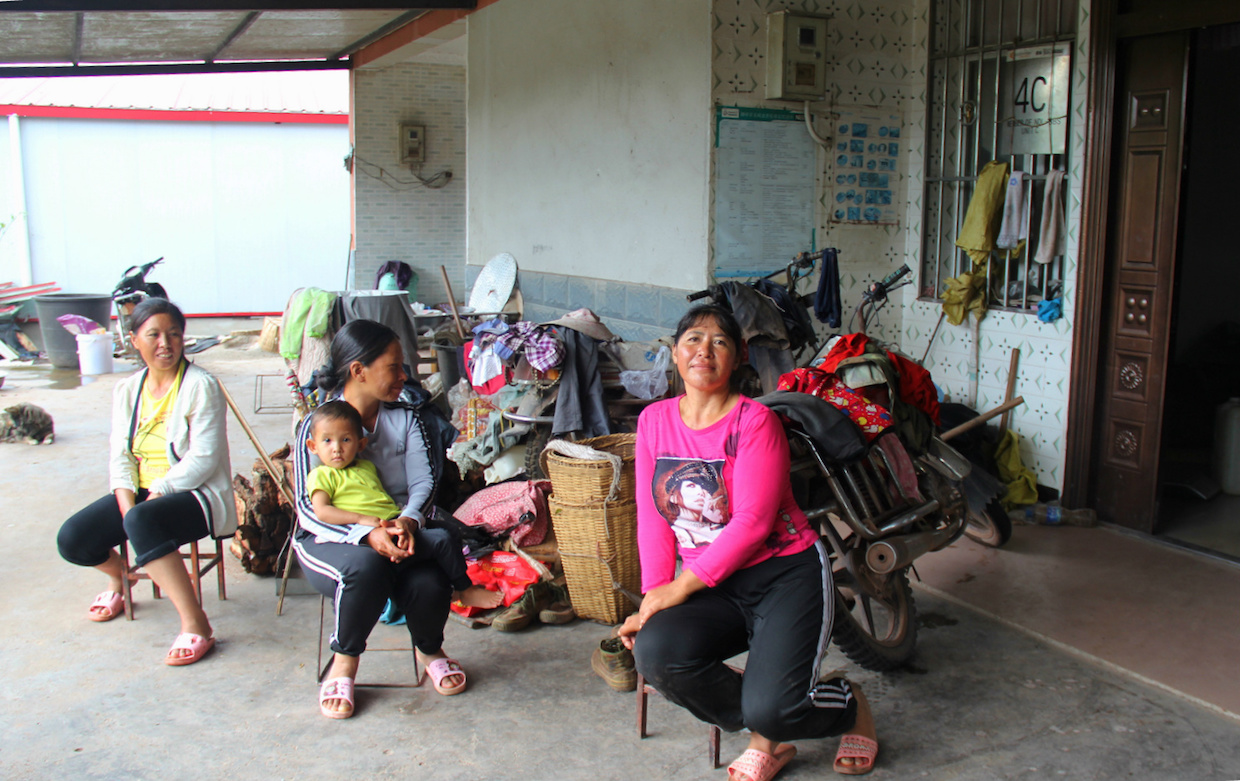 Dakaihe is a coffee-growing village close to Pu’er, a place world-famous for its black tea. In fact, Pu’er also makes up half of Yunnan’s coffee yield, which in turn accounts for 95% of China’s coffee production.

Coffee has been grown in Yunnan for more than a century, but the scale was small until Nestle began to buy beans from the province in the 1980s. High profit margins in the ’80s and ’90s lured many tea farmers to switch to coffee, and the industry expanded quickly.

But from 2009 to 2013 droughts occurred in Yunnan every winter, bringing water shortages and turning farmland barren for millions of residents.

This was certainly true in 2011, when a bitter cold snap impacted four million people and caused losses of 1.5 billion yuan (US$225 million).

Ding added that climate change weakens nature’s ability to adjust and restore, and has extended the drought in Yunnan.

“For sensitive plants like coffee, even a short drought can ruin an entire year’s crop,” said Juliet Lu, a member of the Land Lab at UC Berkeley’s Department of Environmental Science. 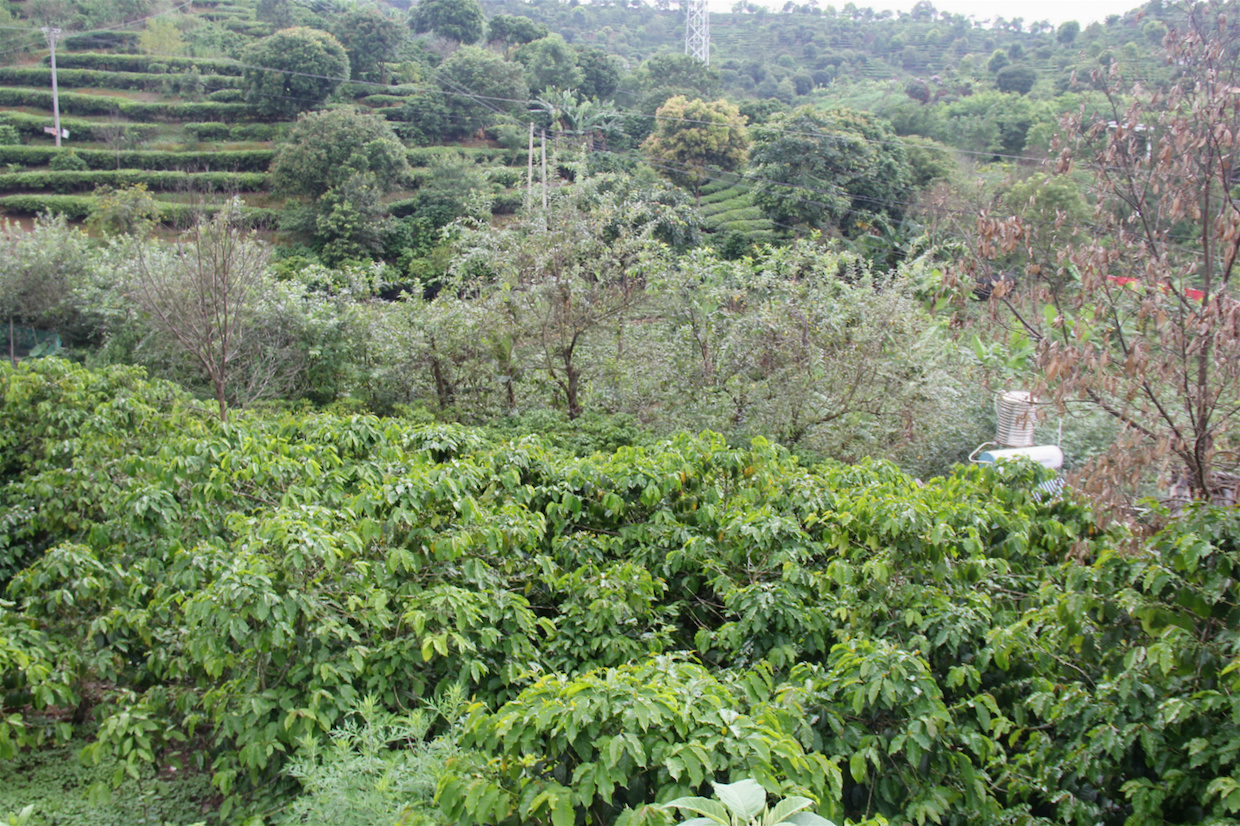 According to the Yunnan Coffee Industry Association, the drought this year has affected more than 2,000 hectares of coffee in Yunnan. It estimates that production would decline by 5-10%.

In Vietnam, coffee output is also predicted to fall sharply due to water scarcity, Reuters reported.

According to the International Center for Tropical Agriculture (CIAT), climate change will have made about half of the world’s coffee-producing land unsuitable for growing by 2050.

“Different studies show that the size of the areas suitable for coffee production will decrease significantly in the next 20 to 30 years because of climatic change,” said Annegret Brauss, project manager at the International Trade Centre in Geneva, where she is working on the climate resilience of international value chains in Africa. “The industry faces challenges from extreme weather, such as the interruption of transport routes due to heavy rains or challenges in the coffee drying process due to increasingly unpredictable weather patterns.”

Coffee can be cultivated in two main ways: in the sun or in the shade of larger trees. The plant has evolved to grow underneath forest canopy, where the high-quality soil provides it with good nourishment. Shade trees prevent soil erosion, maintain soil health and hold water, as well as provide a habitat for native wildlife.

Farmers following the sun-grown method cut down trees to increase production and growing speed. Since sun-grown coffee was introduced in the 1970s, 60% of the world’s 6 million acres of coffee land has been stripped of shade trees. Almost all of the coffee produced in Vietnam and China is sun-grown and sold as raw beans for instant coffee, which requires quantity more than quality. 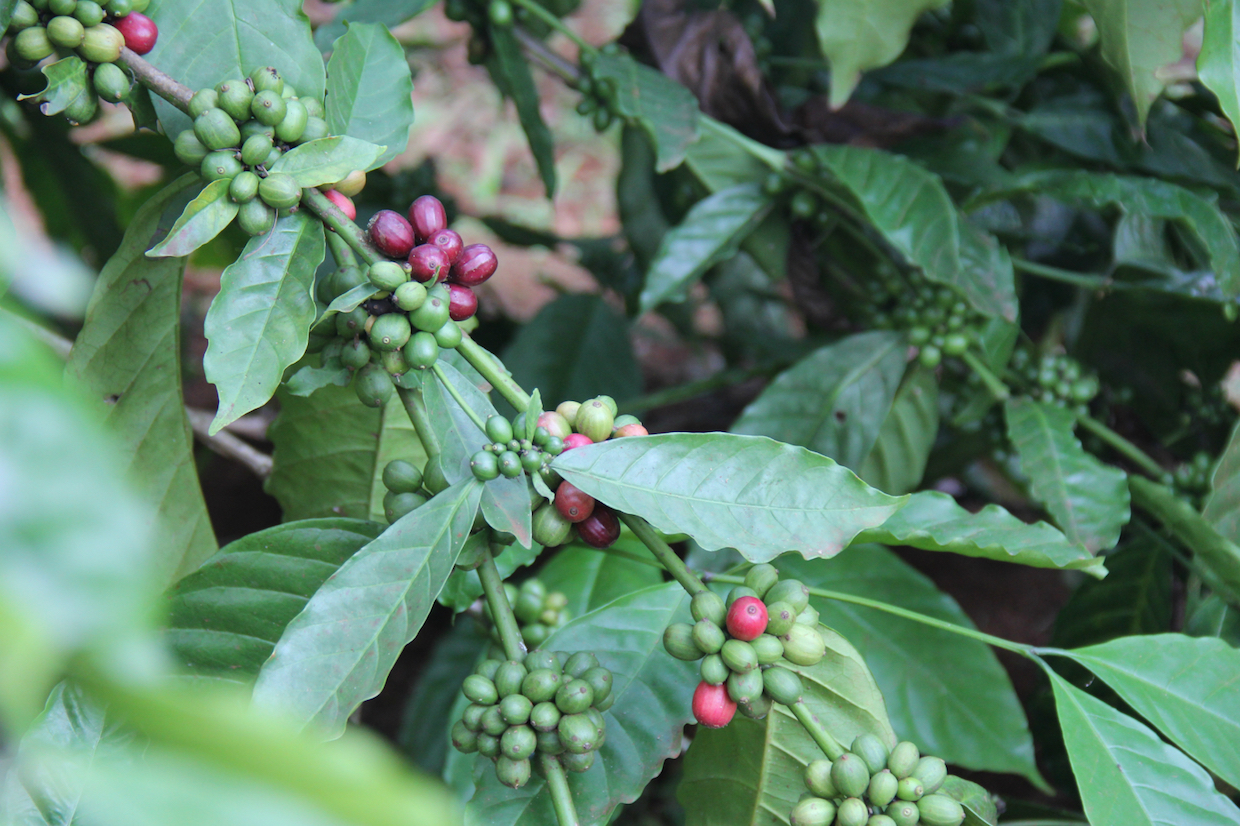 The global coffee industry is worth $100 billion and rising. But the huge profits industry accrues from the world’s second-most traded commodity are not trickling down to the people who grow the beans. Farmers can often not afford to use the shade-grown method because it means smaller yields.

Coffee is also sold at a price that has little to do with the cost of growing it. Traded as a commodity, coffee’s price changes every minute at the Intercontinental Exchange (ICE), a major commodities trading hub based in New York City. The price is determined by supply, demand and speculation. The price can vary slightly depending on factors such as brand reputation and output, but in general, the commercial coffee market is a buyers’ market, according to Tim Heinze, chief executive officer of Yunnan Coffee Traders.

The share of the money going to farmers like Eban in Buon Ma Thuot is paltry. Last year, revenue from his 2.6 hectare coffee plantation was 110 million Vietnamese Dong (US$4,740). Revenues are even smaller for farmers in China because costs — from fertilizer to labour fees — are higher. Yunnan farmer Li Yemei said she has barely made any money from coffee in the past four years. To make ends meet her husband has to find temporary jobs on construction sites in town. 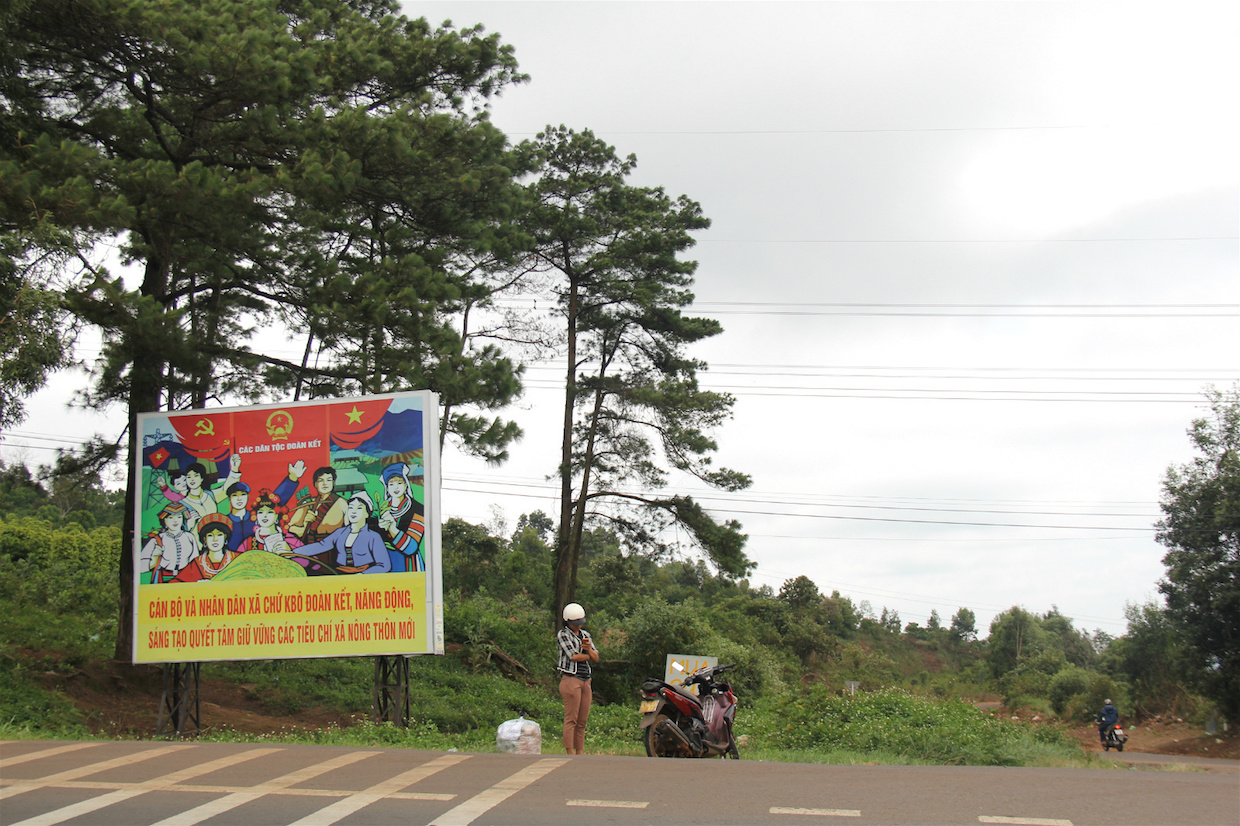 Low prices push farmers to sun-grow coffee, which in turn puts pressure on forests. Climate expert Peter Baker at CAB International, a nonprofit organization aimed at solving problems in agriculture and the environment, estimated that each year global coffee production grows by about 2% and takes up an additional 100,000 hectares of land (almost two-thirds the size of London). In nearly all countries where coffee production is expanding rapidly, deforestation is the primary source of new coffee lands.

In Vietnam, tens of thousands of square miles of forestland have been cut down since the 1970s, some to make way for sun-grown coffee, tea and rubber. Between 1986 and 2016 coffee production grew by nearly 100 fold. Much of the coffee land is now severely exhausted because of the chemical fertilizers, herbicides and pesticides used to drive up yields.

There is a direct tie to the loss of trees, which act as a natural barrier to pests and disease. Once the farmers removed them they had to start using chemical pesticides. Furthermore, rain began falling directly onto the land, washing away nutritious soil and requiring the use of more fertilizers, in a vicious circle.

According to the IPCC’s land use report, land degradation contributes to climate change, which in turn puts more pressure on agricultural activities. When land is degraded, it reduces the soil’s ability to absorb carbon and exacerbates climate change. Currently, agriculture, forestry and other land use generates 23% of net greenhouse gas emissions. And natural land processes – such as soil formation, nutrient cycles and water cycles – absorb around a third of greenhouse gases emitted by burning fossil fuels and industrial processes.

Twenty-seven-year-old coffee farmer Thuyl Nie from Cu Pong commune remembers how it was in his childhood when there were still thick forests and wild animals running on the mountains nearby.

This is Part 1 of Karoline Kan’s two-part series on coffee growing in the Mekong region.

[Editor’s note: This story, originally appearing at China Dialogue is being shared through the CC BY-NC-ND 2.0 UK license. No changes have been made.]

Karoline Kan
Karoline Kan is the Beijing Editor at chinadialogue. Before joining chinadialogue, she had worked as reporter and writer at That’s Beijing magazine, Radio France International, and The New York Times Beijing office. She has won the 2016 International China Journalists Association’s award. Her book, Under Red Skies, Three Generations of Love, Loss, and Hope in China, will be published in 2019 by Hachette, New York.

Thanks for this Karoline, a good update!

I believe that most in the coffee business don’t appreciate the full importance of forest to regulate local climate and the hydrological cycle. In fact I think environmental NGOs have maybe focused too much on the biodiversity angle which local people are not so concerned about, but they ought to be made fully aware about rainfall and how deforestation even hundreds of km away might affect them.

I’m extremely concerned about this and I think until the coffee industry does something decisive about it, their claims to be ‘sustainable’ are mere greenwashing – it’s futile to have a model farm in a deteriorating landscape.

I did a piece recently on Vietnam’s climate crisis which goes into more detail: https://www.researchgate.net/publication/333618816_Vietnam's_looming_climate_crisis