The Gesha of Gourds: A History of Pumpkin Spice in Coffee 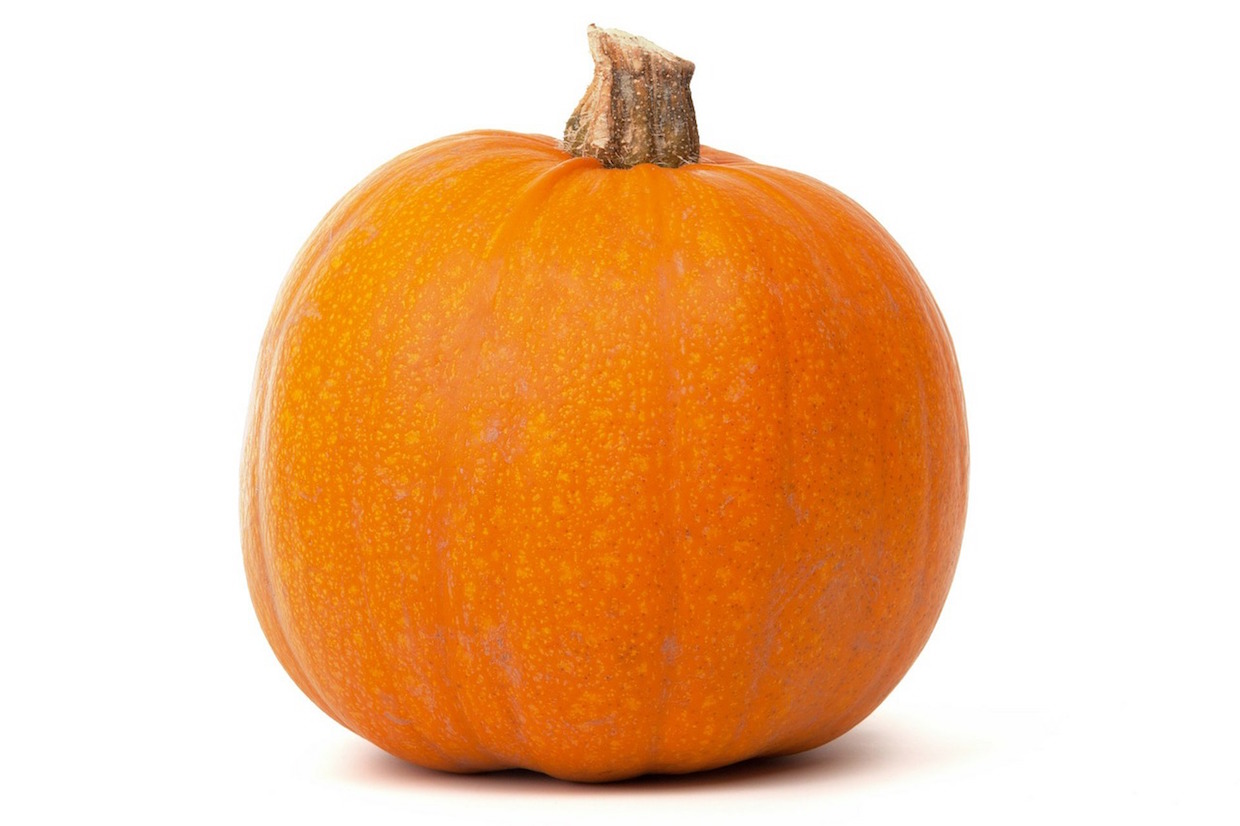 Pumpkin spice has become an iconic flavoring in the United States, a reality for which coffee roasters and retailers can safely shoulder most of the blame — or accept most of the credit, should you be a PSL-half-full type.

Forbes estimated that in 2015 Starbucks’ Pumpkin Spice Latte accounted for more than $100 million in sales. Last year, a Nielsen report revealed sales of pumpkin-flavored products reached $488.8 million, a 15.5% increase from 2017. To put that absurd number in coffee terms, it’s more than the 2018 coffee export value for either Uganda, Mexico or Nicaragua, according to International Coffee Organization data. 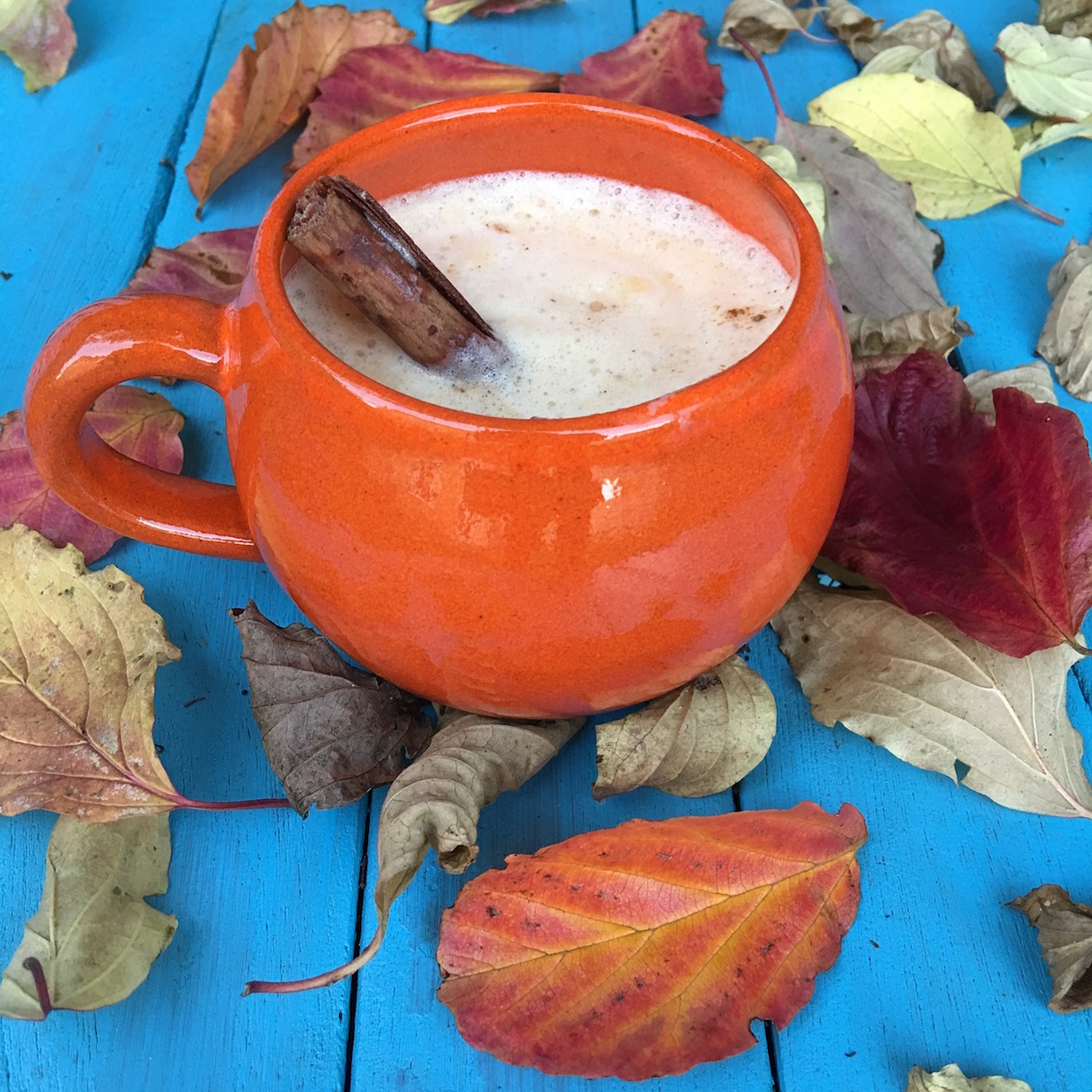 The Gesha of Gourds

So, how did we get to this point? Let’s begin with the pumpkin itself. Pumpkin traces found at archaeological sites in the Americas can be dated as far back as 6,000 years. Considered one of North America’s first domesticated plants, the pumpkin as we know it today is technically a squash cultivar — think “the Gesha of Gourds.” As a crop plant, it proliferated among American colonists, particularly those of British and Dutch descent.

One of the first written records to show the combination of pumpkin and spices for consumption was written by prominent Dutch lawyer and landowner Adriaen van der Donck in 1655. This, folks, may be the first ever pumpkin drink hot take:

The English, who in general think much of what gratifies the palate, use it also in pastry, and understand making a beverage from it. I do not mean all sorts of pumpkins, and cucurbites that may be found anywhere, and of course in the New-Netherlands; the Spanish is considered the best.

Over time, colonists began refining a spice blend of molasses, allspice, nutmeg and ginger, as seen in Amelia Simmons 1796 cookbook, American Cookery. The cookbook makes several mentions of the combination of molasses, allspice, nutmeg, and ginger together with “pompkin” and milk. Simmons appears to have been the first to solidify the flavor combination that most resembles the pumpkin spice of today. Interestingly enough, Simmons’ book was written to help guide a growing generation of orphan girls who, by whatever circumstances, are forced into “going into families in the line of domestics.” Wrote Simmons:

It must ever remain a check upon the poor solitary orphan, that while those females who have parents, or brothers, or riches, to defend their indiscretions, that the orphan must depend solely upon character. How immensely important, therefore, that every action, every word, every thought, be regulated by the strictest purity, and that every movement meet the approbation of the good and wise.

Times certainly have changed — and pumpkin spice right along with them. Pumpkin-spice and pumpkin-related food products saw a massive spike of popularity with the industrialization of food. As Laurie Harrsen, senior director of consumer communications and PR for McCormick, told DCN, “Up until the 1930s, making pumpkin pie involved roasting and straining pumpkin.” 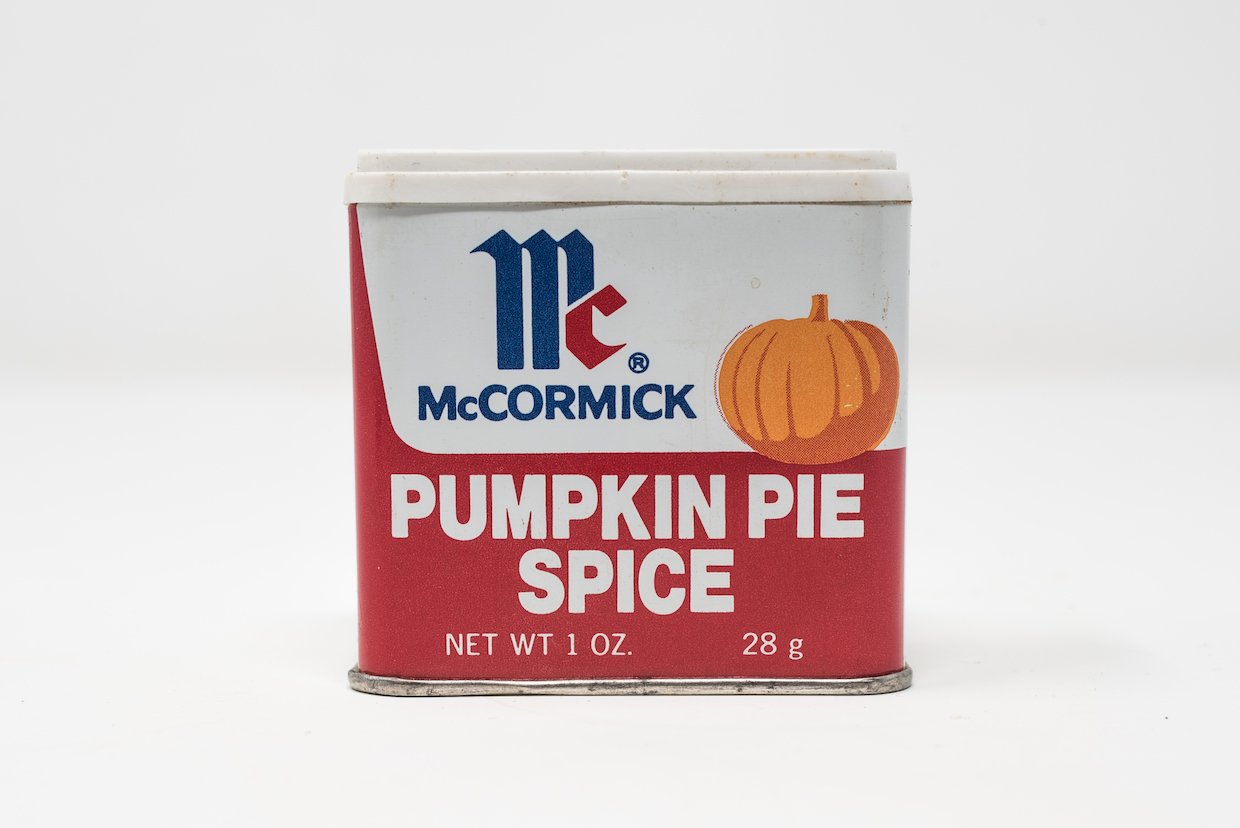 McCormick began mass-producing its own pumpkin spice blend in 1934. Harrsen described it as a “a blend of four familiar spices” — including cinnamon, ginger, nutmeg, and allspice. The company marketed the blend for sweetened autumn baking recipes, and the evolution of franchised grocery stores in the 1930s and 1940s delivered modern pumpkin spice onto shelves from coast to coast.

Despite the availability of pumpkin spice, it took several decades more before people had the history-altering idea to combine it with America’s favorite caffeinated beverage. In the “Nutrition Talk column of the March 1980 edition the Montreal Gazette, authors Jane Hope and Dr. Elizabeth Bright-See first mention pumpkin pie spice as a sugar substitute. “Five cups of coffee with just a level teaspoon of sugar adds up to 90 calories a day you really don’t need,” they wrote, while pushing for cinnamon, cloves, nutmeg or ginger as possible substitutes.

It wasn’t until the 1990s that some coffee roasters initially began experimenting with pumpkin spice flavoring. A roaster called Home Roast Coffee near Tampa, Florida, appears to have been among the first to combine pumpkin and coffee, according to a report from the Chicagoist. Within two years, the nascent pumpkin spice movement had spread to as far away as Allentown, Pennsylvania. 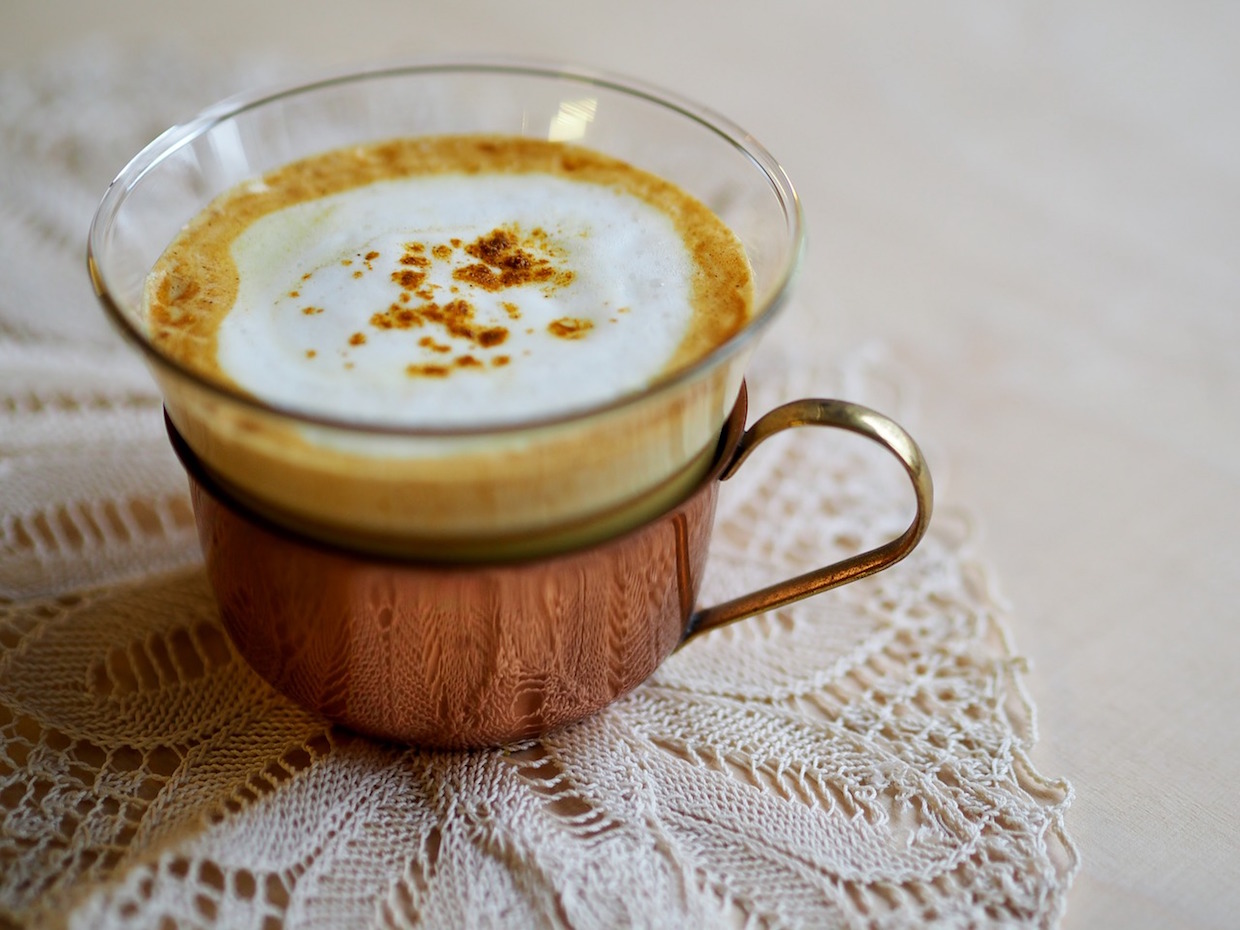 In a 1998 profile on a new joint venture between longtime Pennsylvania company Fasig’s Coffee and the ice cream brand Breyer’s Coffee, “Pumpkin Spice” was mentioned three times as an exotic and appealing coffee flavor.

Randy Fasig, the owner of Fasig’s Coffee, told DCN that he first began flavoring roasted coffee with pumpkin spice in the fall of 1997. Said Fasig, “It wasn’t until the early 2000s that it really took off, though.”

Birth of the PSL

While there may have been some isolated dabbling in pumpkin and coffee concoctions, the big bang in pumpkin spice can be traced straight to 2003, when Starbucks first introduced the PSL.

“The handcrafted Pumpkin Spice Latte (PSL) was born in 2003 and is Starbucks top-selling seasonal beverage of all time [sic]” a Starbucks media relations representative wrote in an email to DCN. To date, the coffee retail giant has sold more than 424 million of its fatty, sugar-filled pumpkin spice lattes across the globe. 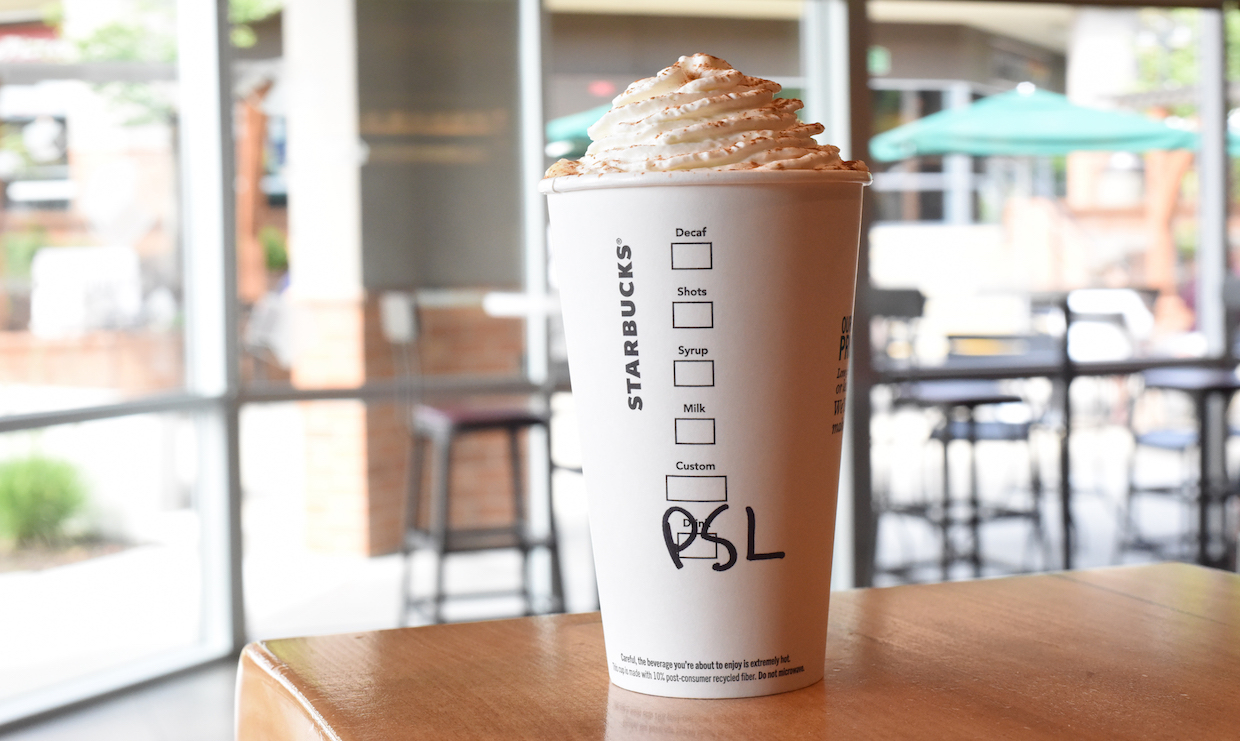 Despite the fact that its release has now been pushed back to the dog days of summer, the Starbucks PSL is arguably the godmother of all seasonal drinks. This is a trend that has not been missed by smaller players throughout the specialty coffee industry over the past 16 years.

Upscale coffee shop Menotti’s in Los Angeles, for one, has been offering variations of its own autumn seasonal drinks since at least 2013. Renowned roaster Onyx Coffee Lab in Arkansas, debuted its higher-end version of the pumpkin spice latte, called the Harvest Latte, in 2014. Philadelphia-based roaster La Colombe, which started offering a pumpkin spice cold brew in 2016, sure enough brought its PSL to canned, RTD form as soon as the opportunity allowed. Scores more examples abound. 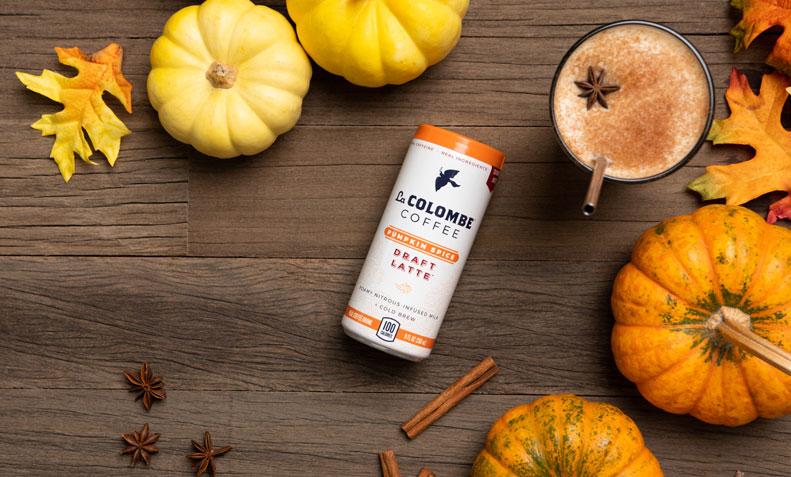 Pumpkin spice has come a long way in coffee, and not without its detractors. No matter your opinion of pumpkin spice and its cultural associations, the market has determined that the PSL is here to stay. Resistance, it seems, is futile, and may only lead to “pumpkin spice fatigue.”

While not going all the way back to Amelia Simmons’ 1796 cookbook for girls, McCormick’s Harrsen does offer a much sunnier take, saying, “The aroma triggers fond memories of fall and signals that Thanksgiving is on its way!”