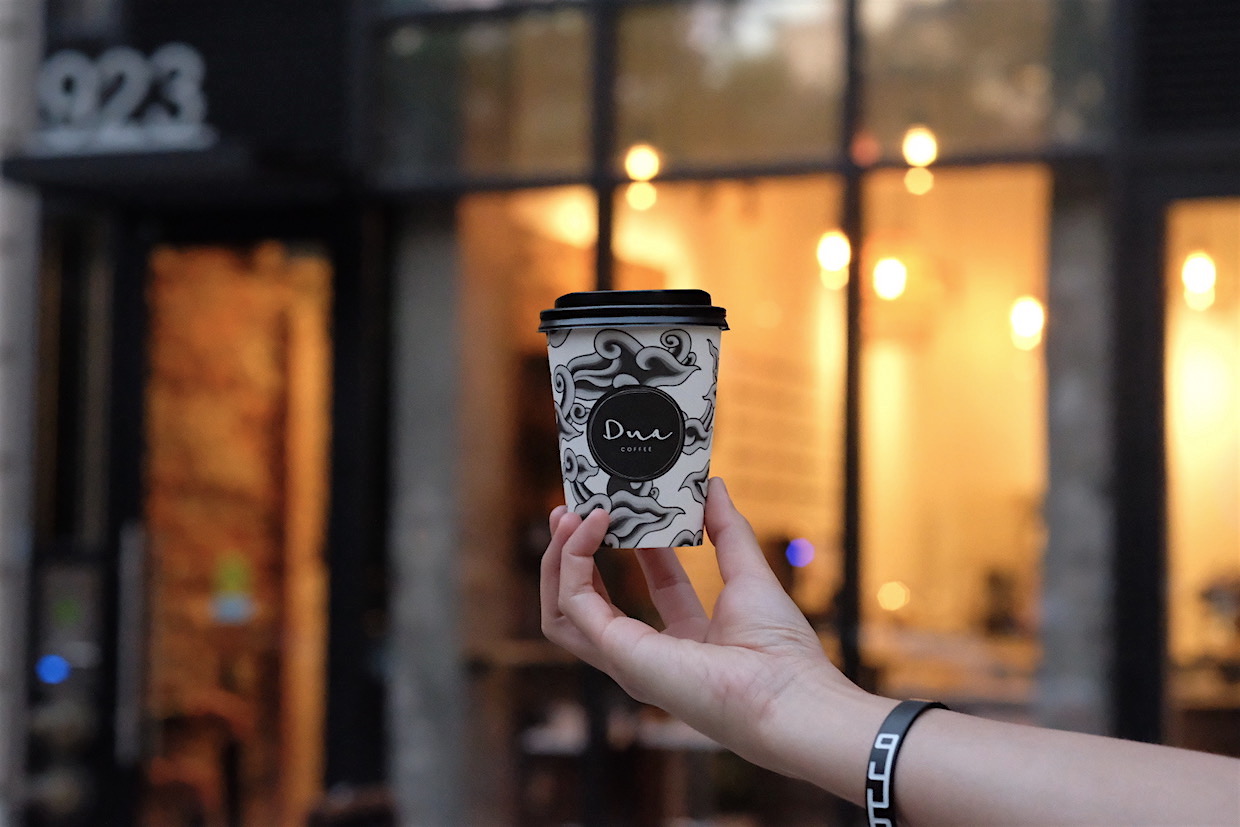 Things can be a tad chaotic in the United States capital city of Washington D.C. Thankfully, regardless of the state of affairs at the White House, just three blocks away a new resource has emerged for those seeking to relax, renew or escape with warm cup.

“We saw D.C. as a melting pot,” Dua Coffee Co-Founder Rinaldi Nurpratama told Daily Coffee News. “From all over the world, [different countries] have embassies here, and we think that we can fit with the culture of D.C. — a friendly city, and the coffee people here are so friendly and informative, especially the DMV community.” 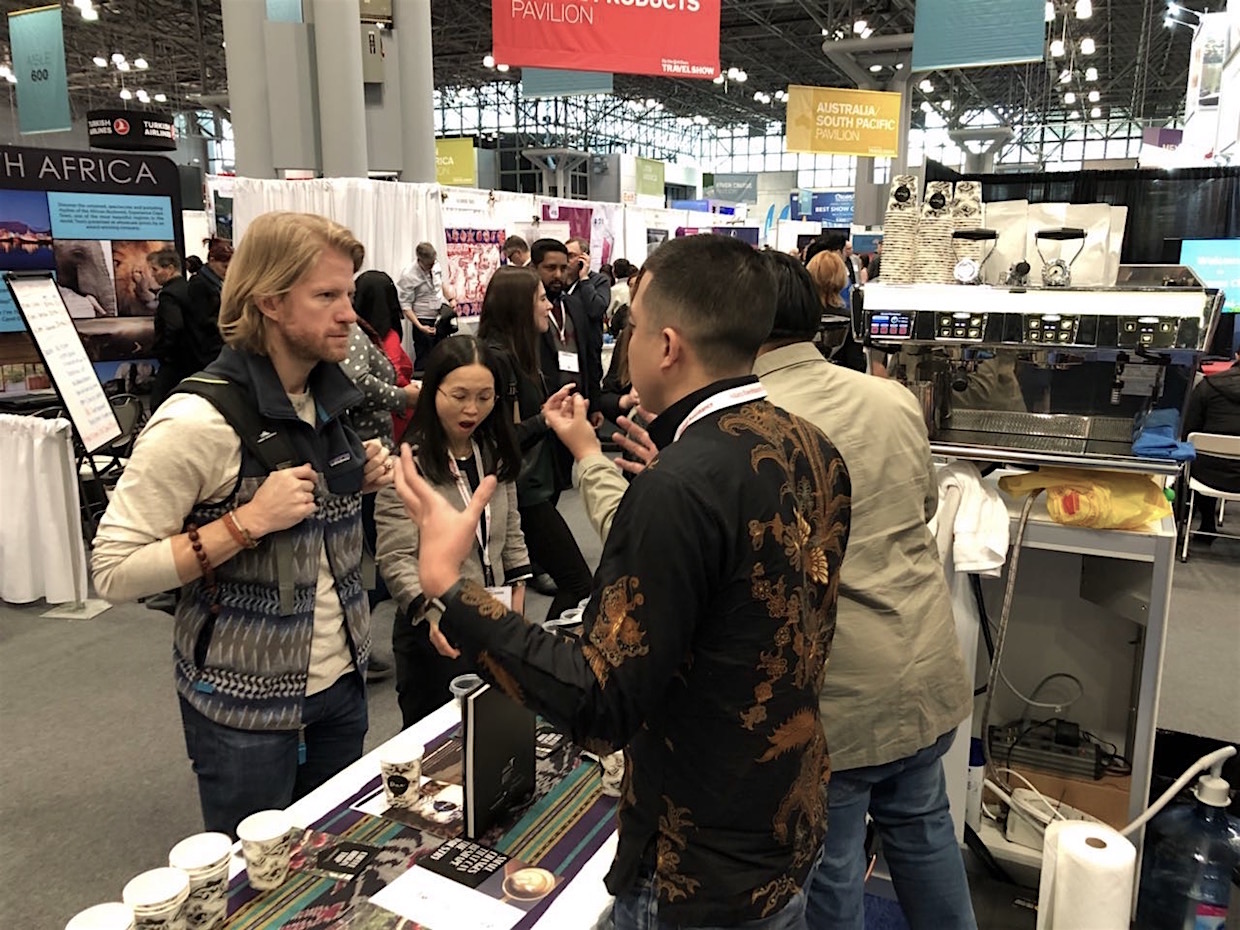 Nurpratama said that an expansion into the U.S. market has always been part of the dream for Dua Coffee since its 2016 launch. The Dua team wants to show the world that there’s more to Indonesian coffee than kopi luwak or beans from Sumatra. The company’s first major test in that regard came during the New York Times Travel Show in February 2018, where Dua was an exhibitor.

“We [brought] Bali Kintamani — not Luwak — and Ciwangi from West Java, both natural process,” said Nurpratama. “After the event we did a small research and… we only saw Sumatran coffee in several coffee shops in New York City and D.C. From that moment, we haven’t stopped.” 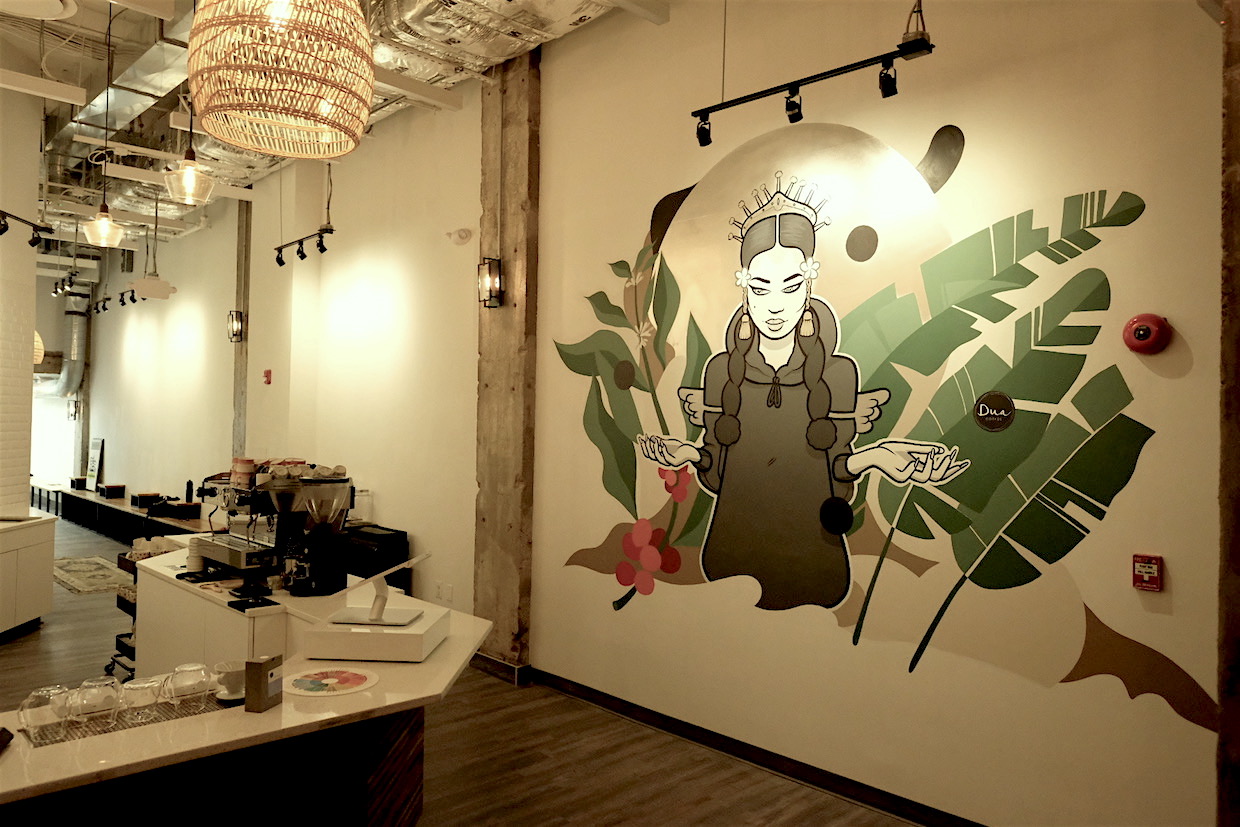 At the new Dua Coffee shop in D.C.

Dua currently has four shops in Indonesia, including two in Jakarta, one in Bandung in West Java, and one in Bintaro, South Tangerang. Another is coming soon to Jakarta. Coffees for all shops are roasted in Indonesia by Tangerang-based Froco Coffee Roasters.

“We choose these two companies because both of them are familiar with Indonesian coffee and also visited farms in Indonesia,” said Nurpratama. “Both are great companies and easy to work with.” 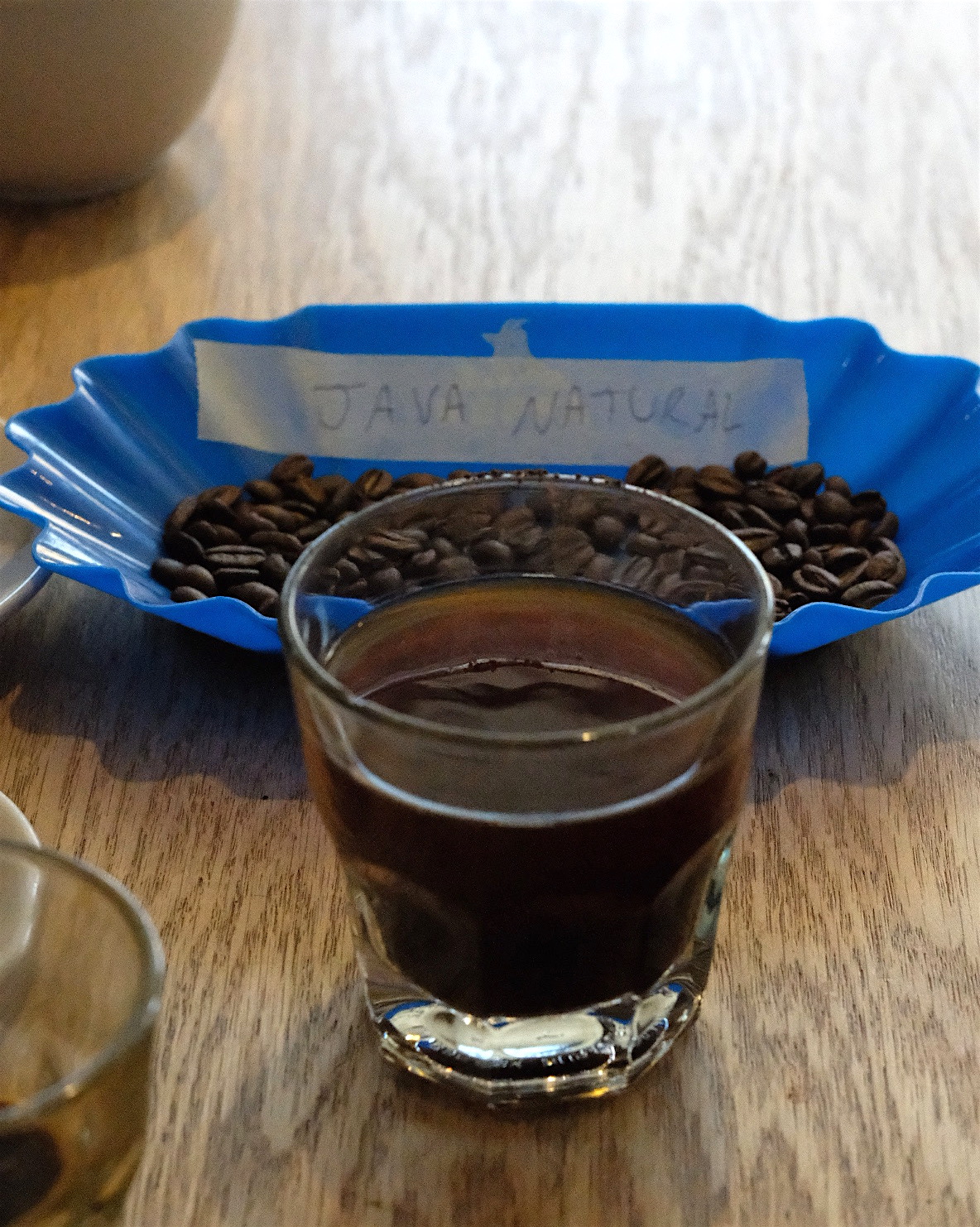 Indonesian coffee at the cupping table at Vigilante Coffee.

Coffees are then ground by a Mahlkönig Peak grinder for extraction on a two-group La Marzocco Linea PB espresso machine, or by an EK43S for quick cups of batch brew.

“Jakarta is more espresso-based and mostly V60 because consumers in Jakarta more [often] enjoy their coffee inside the cafe and would hang for several hours,” said Nurpratama. “In D.C., it’s more fast-paced, so we would say the [customer favorite] brew method in D.C. is more from the batch brew, because it’s fast.” 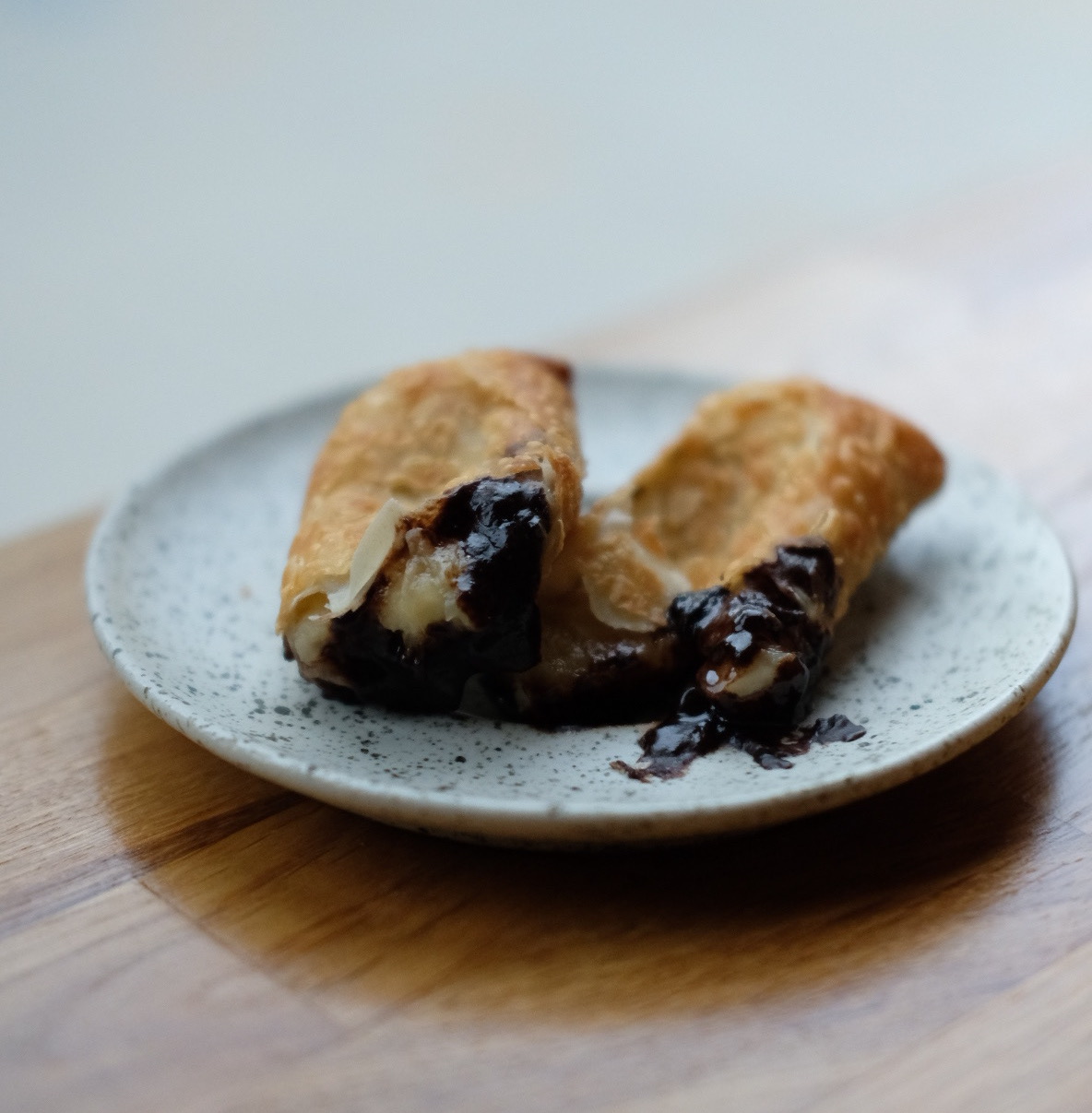 Those interested in a break from the bustling metropolitan norm can also avail themselves of traditional Indonesian coffeehouse treats such as Kopi Susu (milk mixed with coffee syrup), another sweetened milky coffee drink called Kopi Kedua that Dua sells in RTD bottles in Indonesia, and Piscok (pronounced “peas-calk”) that Nurpratama described as essentially a banana stuffed with chocolate, surrounded by an egg roll wrap and deep fried.

With a foothold now on U.S. soil and a growing footprint in Indonesia, the company hopes to continue to expand in both countries, Nurpratama said, including perhaps launching a roasting operation and cultivating direct relationships with more Indonesian coffee farmers. 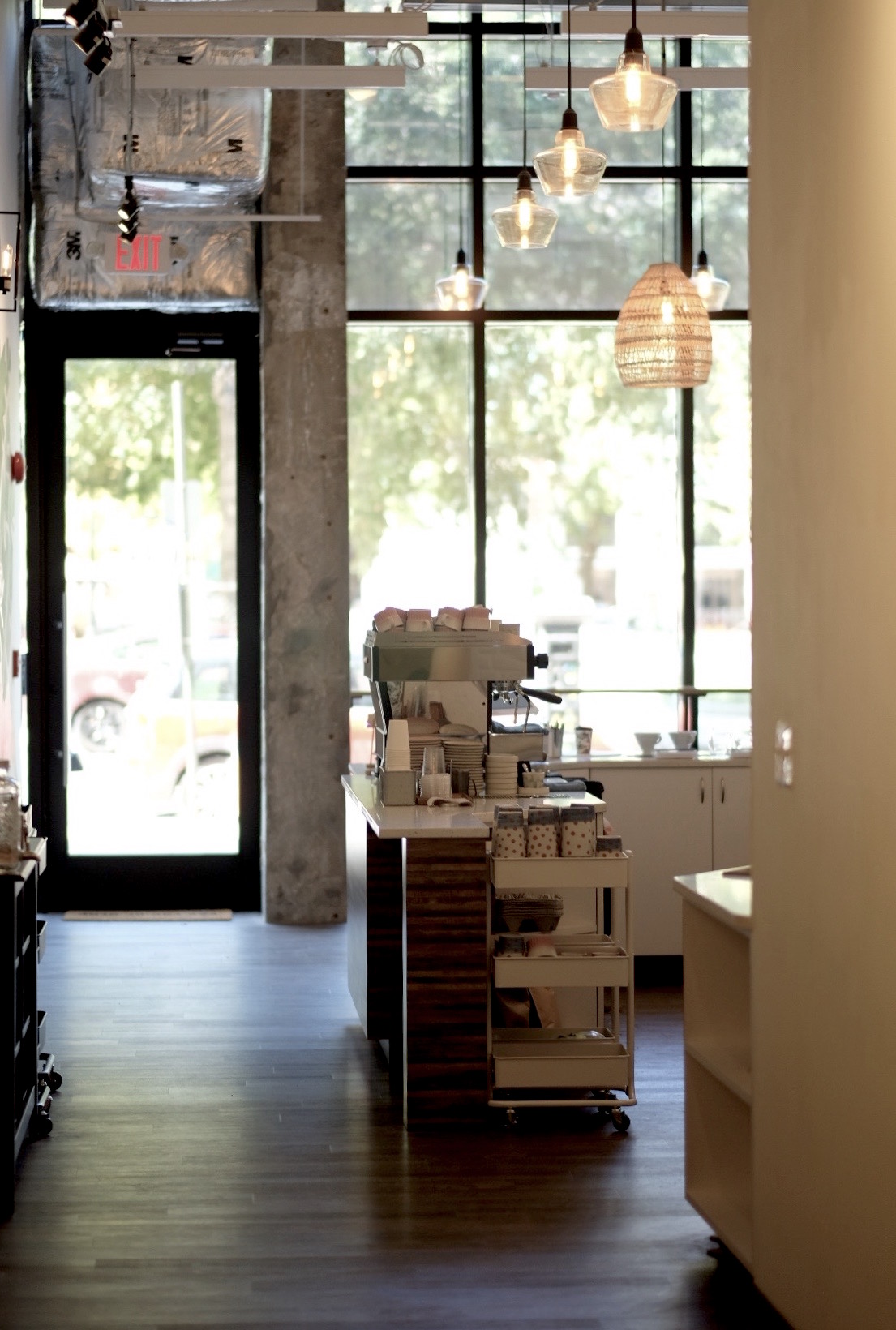 “We have lots of origins; we are a country of more or less 16,000 islands,” said Nurpratama. “We have 300 native languages. So, there’s a lot that we can introduce from coffee and also the culture. For Indonesia, we want to expand on other islands, and we want to be friends with more coffee farmers… and hope that we can collaborate to ensure the quality of the coffee itself and also become a better company. We want to make sure if we grow, the farmers will grow with us.”