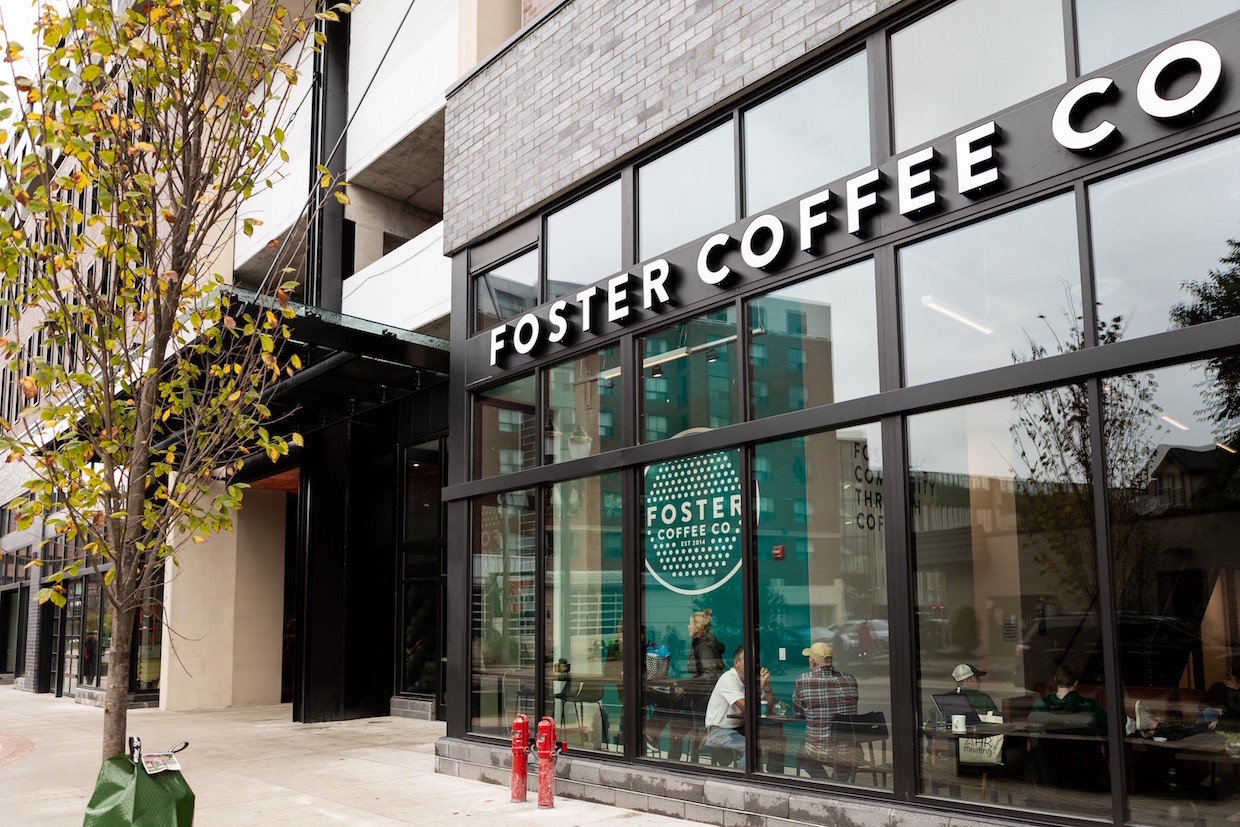 What began as a high school friendship in small town Michigan led Jon Moore and Nicholas Pidek to an eight year adventure touring the country as the rock band Sosaveme. After the band decided to call it quits, the duo formed Foster Coffee Company in Owosso in 2014, taking cues from the many shops they visited while on tour.

The roasting company has since added a second cafe, in Flint, and a new business partner in Jonathan Williams. This past September, the Foster team added yet another tour stop for coffee seekers, an ambitious and spacious cafe in downtown East Lansing. 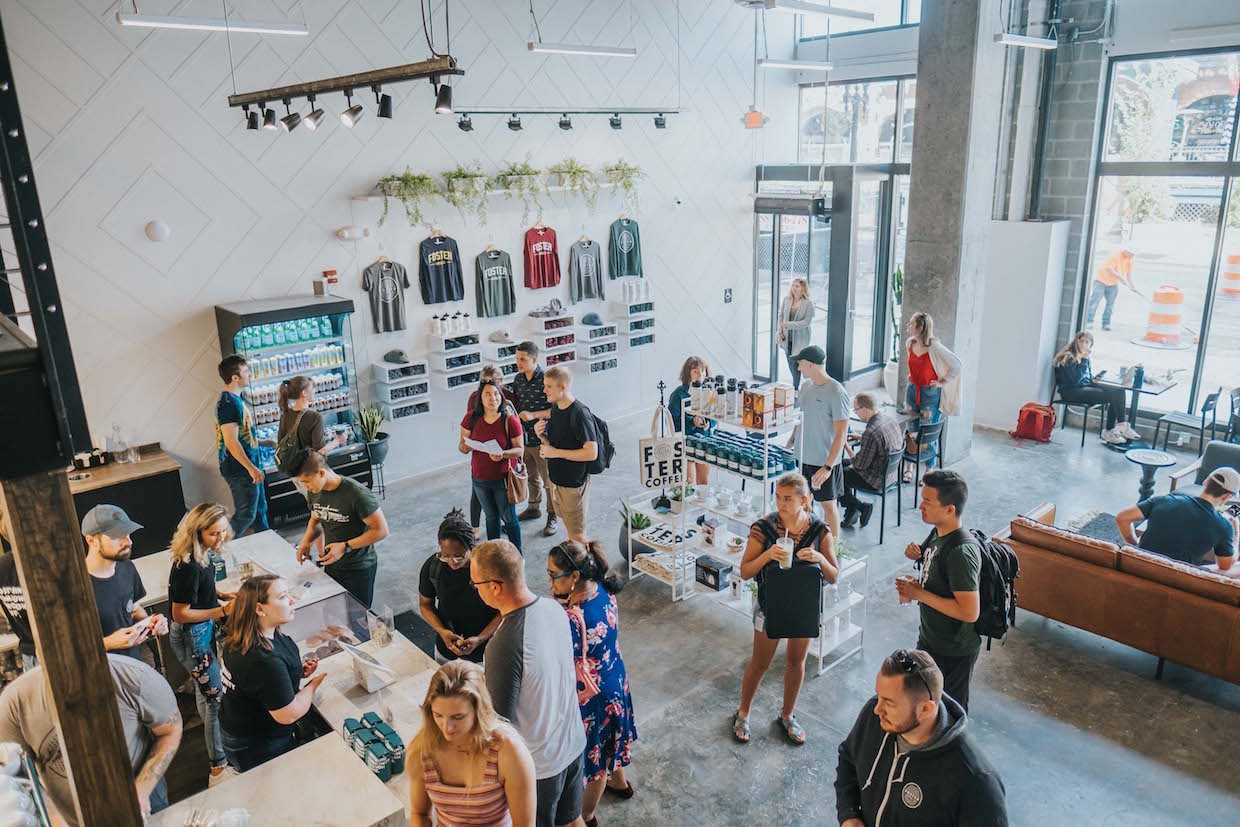 “The idea really started in 2018,” Pidek told Daily Coffee News. “A lot of the chains were [in East Lansing], but with how many college students were there, it was definitely underserved on the craft side of things. We also just felt like it was a good fit geographically. Owosso is the center of Flint and East Lansing, so it really made sense logistically.”

Part of a new development in downtown East Lansing, the cafe is the first shop that the team has been able to design from the ground up.

“Both Owosso and Flint were previous buildings that we renovated,” Pidek said, “so we incorporated a lot of elements that were already inherent in the building. East Lansing was all new, so we could kind of start from scratch.” 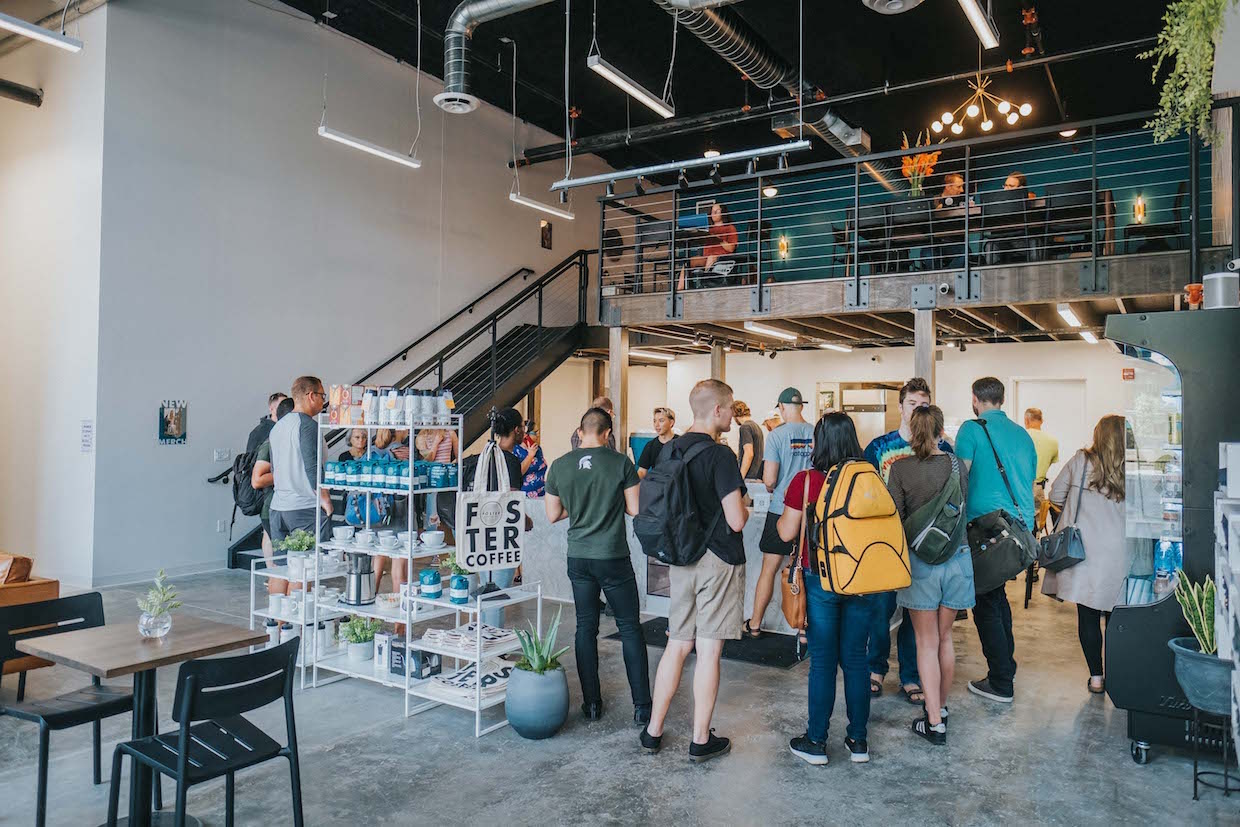 The nearly 2,000-square-foot space boasts 19-foot ceilings, making room for a mezzanine level above the bar for additional seating.

“We wanted it to be modern and yet still have a lot of warmth to it… and have it be a place where people felt comfortable and welcome,” said Pidek. “So that drove a lot of our design decisions.”

Below the mezzanine is a square bar facing the floor-to-ceiling windows that run the width of the cafe. On each side of the bar is a La Marzocco Linea PB — a 2-group on one side and a 3-group on the other — allowing ample space for training plus the ability to keep up with crowd surges.

“With some of our anticipation and projections for East Lansing, we knew it was going to be a busier cafe,” Moore said, “so during our bigger rushes we utilize both machines to cut down on wait times.”

The two espresso machines are assisted by Mahlkönig Peak and Mythos One Clima Pro grinders, while a Mahlkönig EK43 handles batch and manual brew grinding. Pourovers utilize the Kalita Wave with Curtis Corinth hot water dispensers, while Curtis ThermoPro is the batch brewer of choice. 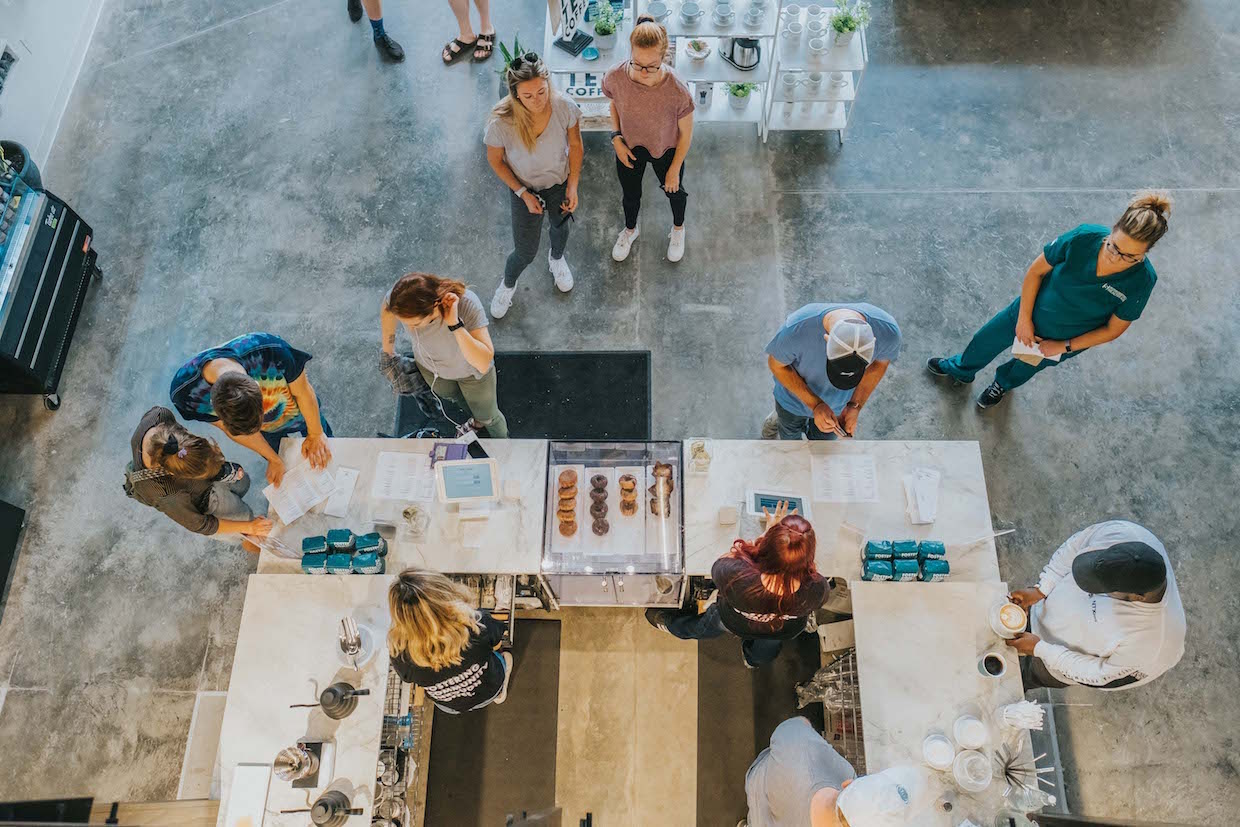 The drink menu features seasonal flavored lattes and specialty drinks, something Moore and Pidek were keen to promote at the new location. Drinks like the peppermint mocha and brown sugar latte, meanwhile, act as easier entry points for customers in the Michigan State University town who may be newer to specialty coffee.

“We want to appeal to a wide range of people, and we knew we’d have to attract a crowd that’s used to getting sweeter, creamier drinks,” said Moore. “Our philosophy from the beginning has been, ‘If we’re going to do something like that, how can we do it to the highest quality?’”

The new cafe boasts a simple food menu featuring breakfast sandwiches and toasts, as well as smoothies and baked goods, with ingredients sourced locally, when feasible.

“Our focus on community starts internally with a lot of our purchase decisions,” Pidek said. “With the exception of green coffee, 80% of our expenses are spent within the state of Michigan.” 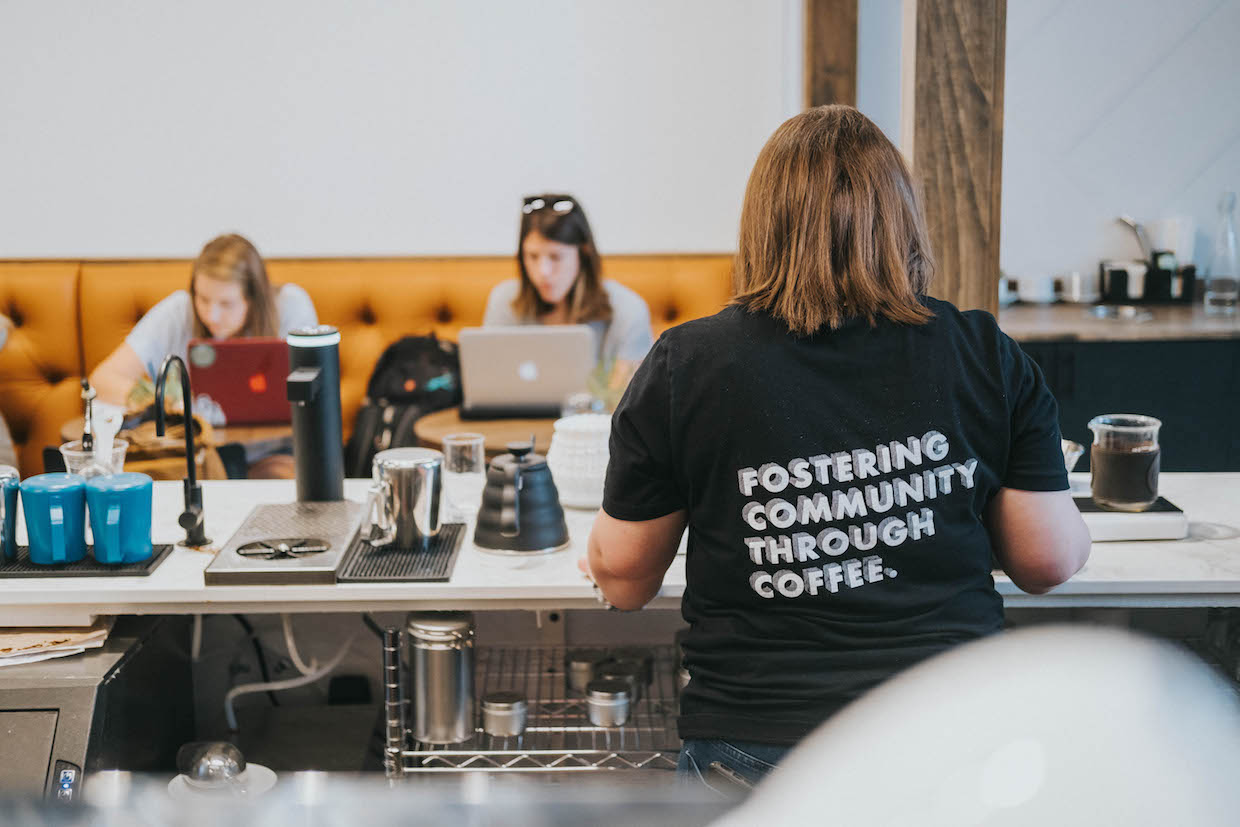 That emphasis on community extends to collaborations with nonprofit and civic groups, with the goal of “fostering community through coffee,” as the company motto emblazoned on the wall of the new cafe states.

I think its great that the founding pair got the chance to travel the country for a season, AND kept their eyes open and remembered the things that impressed them in the coffee places they visited in their odissey. Then, when the band broke up and they woindered “what next” they brought those things that worked and made them work for them in their new spaces.
I think they are also very wise in not playing the Big Boss and telling folks what they will like, but have been flexible enough to intentionally please the “unwashed uncoffeed” masses, yet at the same time maintain high standards and have on offer high end coffees for those that appreciate them…. as time goes on it is highly likely that the “inexperienced” will eventually get curious, and try the “good stuff”… which does NOT need anyone to “learn to like it”. GOOD coffee needs no persuasion to like it. I believe they will do well………..